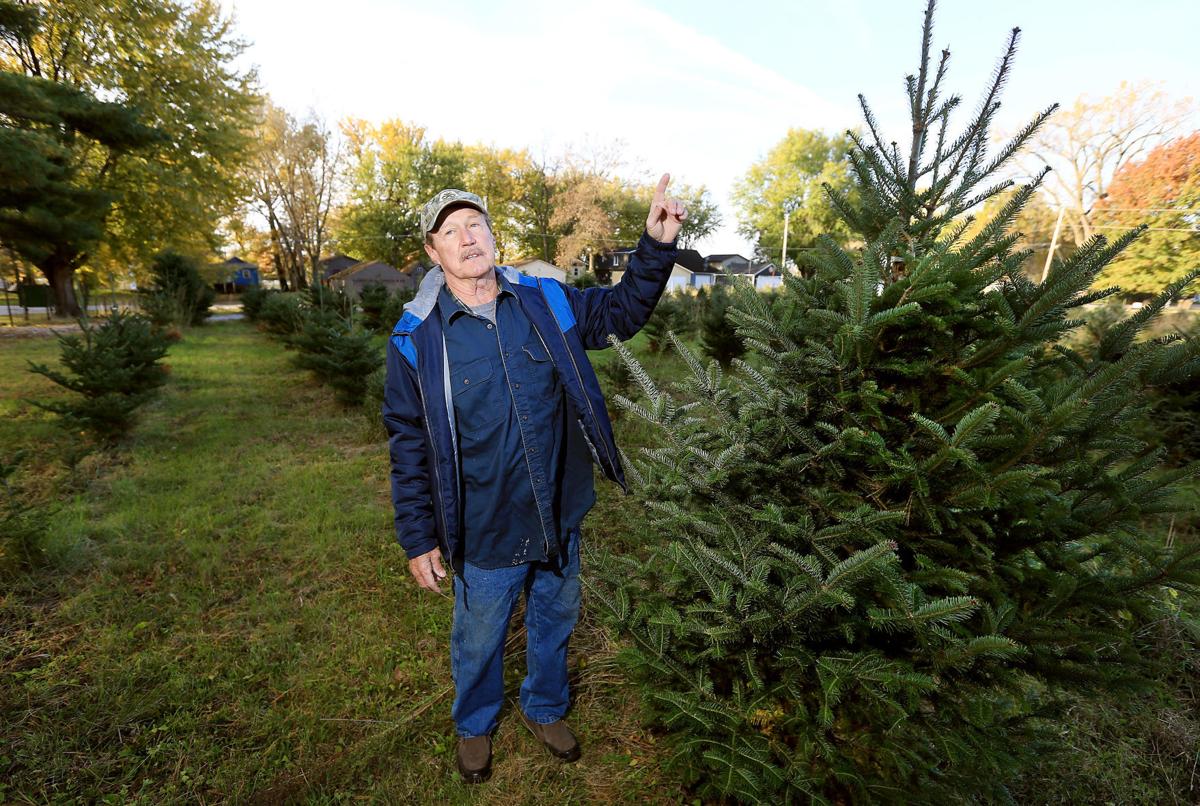 Rick Wyffels talks about the finished height of a Christmas tree after adding a base and tree topper Thursday at his North Shore Drive tree farm in Moline. The farm has been a local supplier of Christmas tree for decades, but because of adverse growing conditions, the Wyffels had no trees to sell in 2018. They will be back in business this Christmas season. 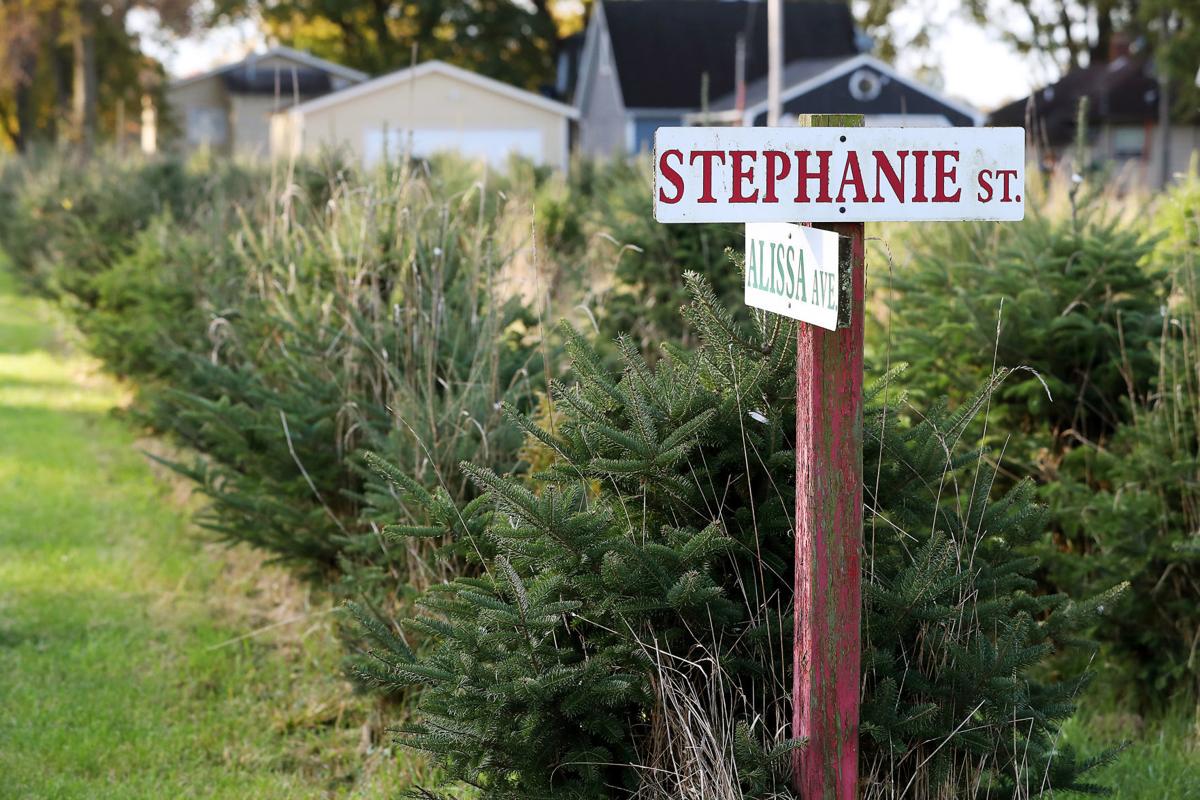 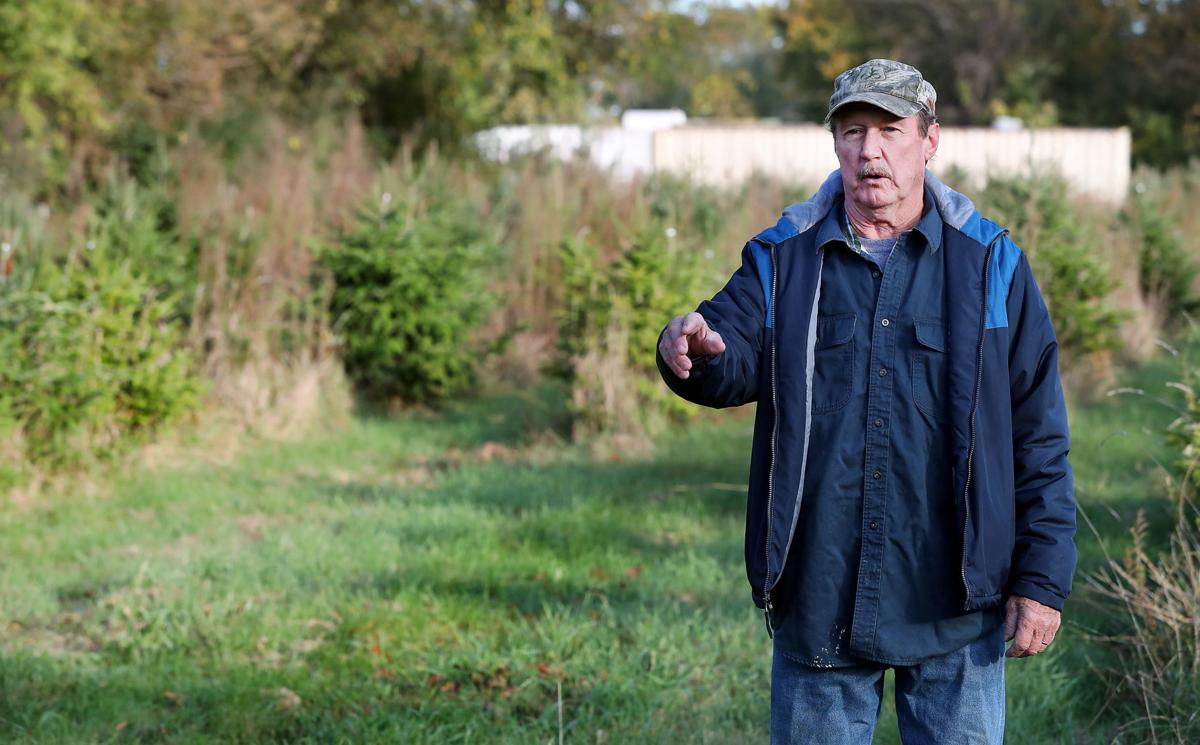 Rick Wyffels talks about the area of his Christmas tree farm that was flooded in the spring, killing some newly planted trees.

On a sun-kissed October morning, at a tree farm just a stone's throw from the Rock River, there is a hearty dash of pep in one 70-year-old man's step.

Christmas is coming, and Rick and Kathy Wyffels are Christmas-loving folks.

"It was a tough last year,'' said Rick, who runs Wyffels Tree Farm, a Quad-Cities Christmas tree staple since 1993, with Kathy, his wife.

Because of drought conditions in 2013, what would have been the Wyffels' 2018 crop did not mature. For the first time in a quarter century, they did not have trees mature enough to sell.

This year, that has changed. The Wyffels lost some newly planted trees to floods in the spring, but despite that, it's "full-tree-ahead" for the 2019 Christmas season.

Come Black Friday — or Bright and Cheerful Friday in the Wyffels' world — Wyffels Tree Farm will be open for business.

Rick will be at the shed, shaking and loading trees and handing out saws to customers. Kathy will work the cash register and create wreaths, grave blankets and a host of creative evergreen displays.

"Truth is, Kathy and I would look at each other last year and wonder what we were going to do with our time,'' Rick said during a stroll through his three acres of balsam, fraser and Canaan fir trees at 3319 North Shore Drive. "We really felt bad last year. It was a strange time for us.''

The Wyffels reached out publicly last October to let people know there would be no 2018 crop.

"We went to whoever would listen about not being open,'' said Rick, who began selling Christmas tree after retiring from teaching and coaching high school wrestlers. Kathy also was a teacher.

"What we didn't want — and we have so many loyal customers — was someone driving up to the gate and seeing the 'closed' sign, especially if they planned the day around it or made a long drive.''

While walking through his many rows of firs, Rick said he has a message for potential customers. A 9-foot tree is a thing of the past, but a smaller tree will serve just as well.

"First, you get a 6-foot tree, you put it in a stand, and you immediately have added an inch or more. ... Then if you add a tree topper, you have two more inches to it. ... The days of the 9-foot tree just won't happen, which is why you should remember a 6-foot tree works.''

The tree-shopping process remains the same at Wyffels Tree Farm. Customers are given saws and set out to cut their own trees. However, Rick said he will cut down a tree for anyone who asks, and he guarantees that the trees he ties to vehicles won't fall off.

"The ones I tie make it to Chicago,'' he said with a laugh. "Heck, we had a guy with a convertible come in one warm November day, and we took care of him. We even tied one to a motorcycle."

Years of selling trees have created many happy memories for the Wyffels.

"Personally, I love the families that make it an event," Rick said. "Heck, we even had a guy put his girl's engagement ring in the tree when he proposed.''

Even a near-disastrous moment that occurred when the ground was covered with 2 feet of snow had a happy ending..

"A guy from Chicago lost his car keys in the dark,'' Rick said. "He had no backup, and he had to be at work the next morning. There were some anxious moments, but an hour later, we finally found his keys.''

When the gate opens for business the morning after Thanksgiving, Rick and Kathy will breathe a huge sigh of relief.

"We missed the people,'' Rick said, recalling last year. "We got into this for something to keep us busy after retiring and to pay for college for our three girls. It didn't pay for it all, but it sure did help.

"We missed the looks on the faces of the little kids getting their Christmas tree. We missed talking with people and all the requests we get that might seem unusual for some, but normal for us. We just missed it.'

Now, though, all is well.

'We've got to cauterize these wounds': Davenport Schools to seek forgiveness of $9 million in negative unspent balance

Rick Wyffels talks about the finished height of a Christmas tree after adding a base and tree topper Thursday at his North Shore Drive tree farm in Moline. The farm has been a local supplier of Christmas tree for decades, but because of adverse growing conditions, the Wyffels had no trees to sell in 2018. They will be back in business this Christmas season.

Rick Wyffels talks about the area of his Christmas tree farm that was flooded in the spring, killing some newly planted trees.