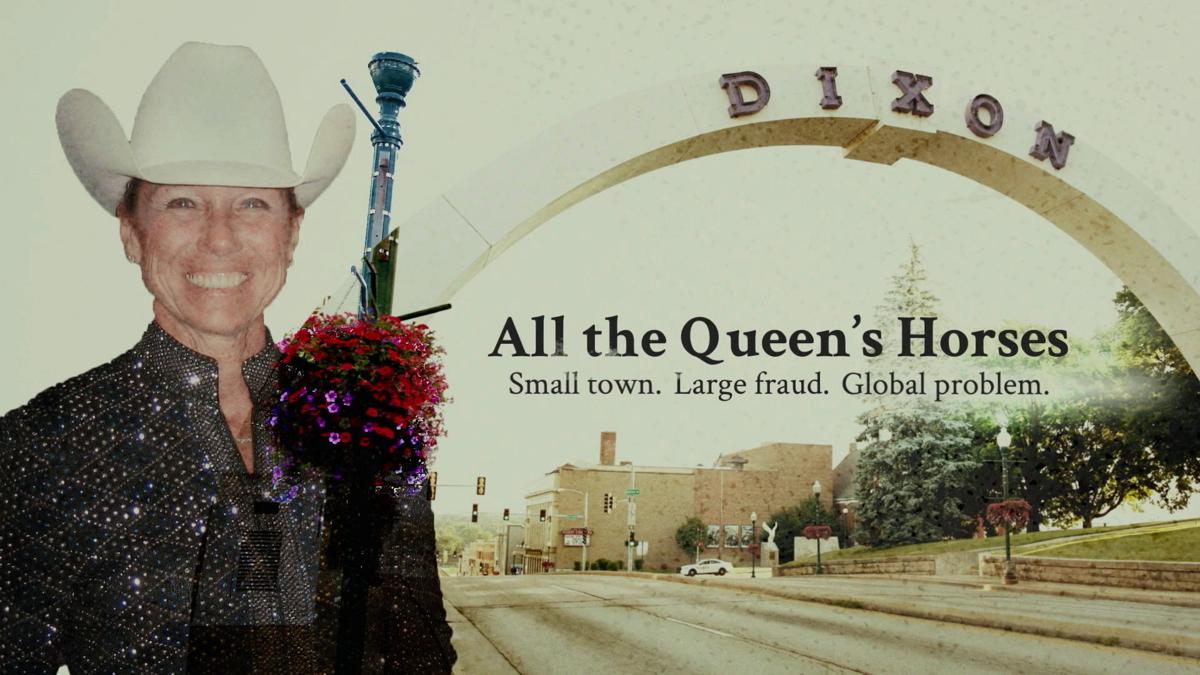 A production still for the documentary, "All the Queen's Horses," about Rita A. Crundwell, who embezzled nearly $54 million from the city of Dixon. The movie was screened to a near sold-out crowd in Dixon Sunday. 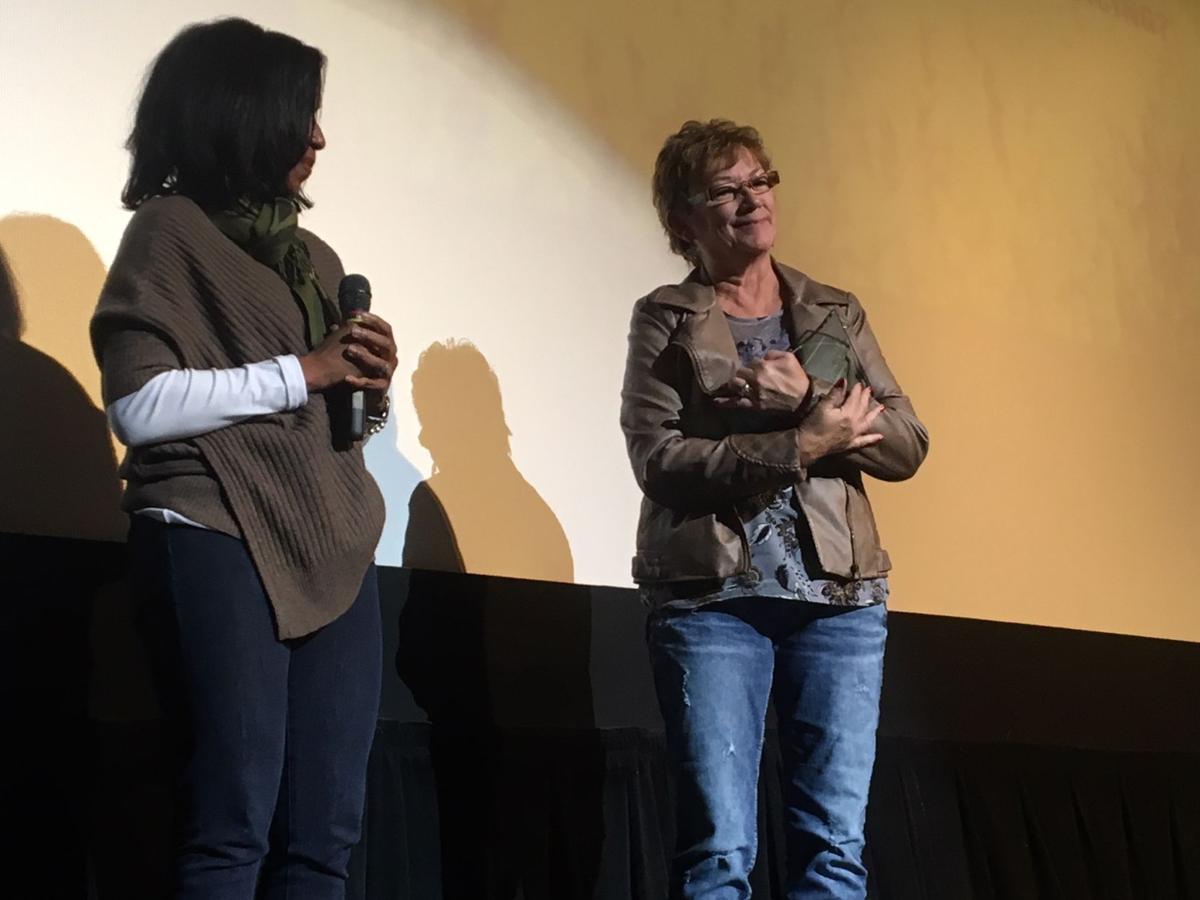 Kelly Richmond Pope, director of "All the Queen's Horses," gives an award from the National Association of State Boards of Accountancy Inc. to Kathe Swanson, former city clerk of Dixon, Illinois, on Sunday at the Historic Dixon Theatre. 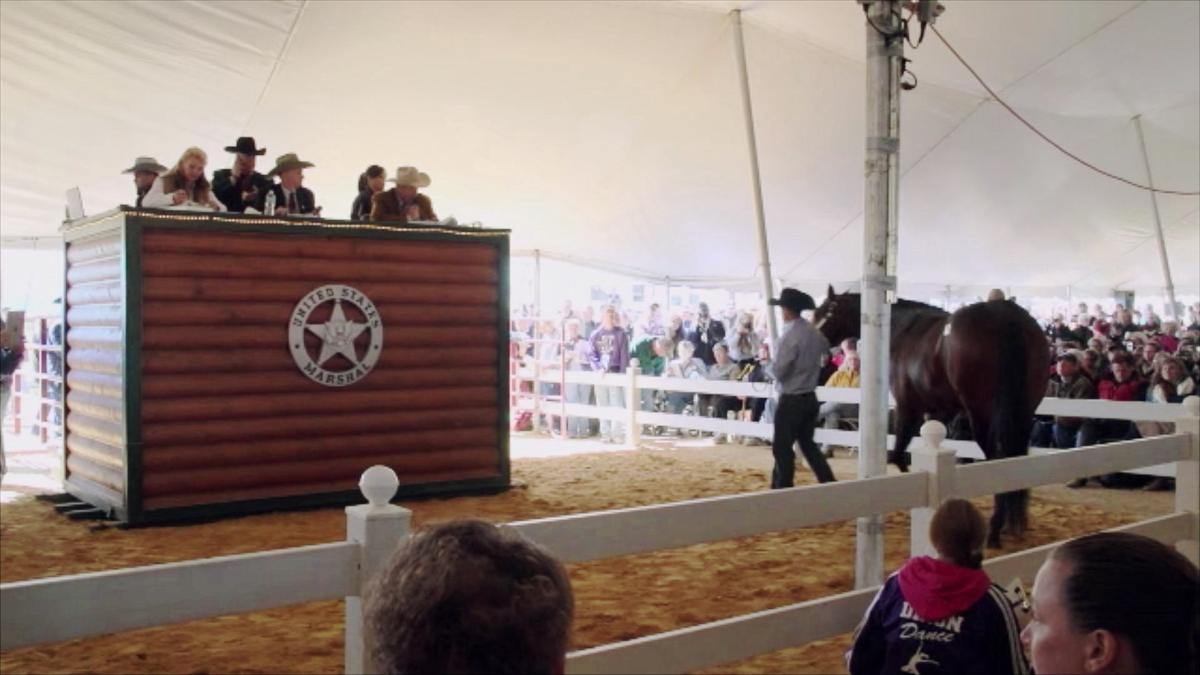 Much of Rita Crundwell's property is auctioned. 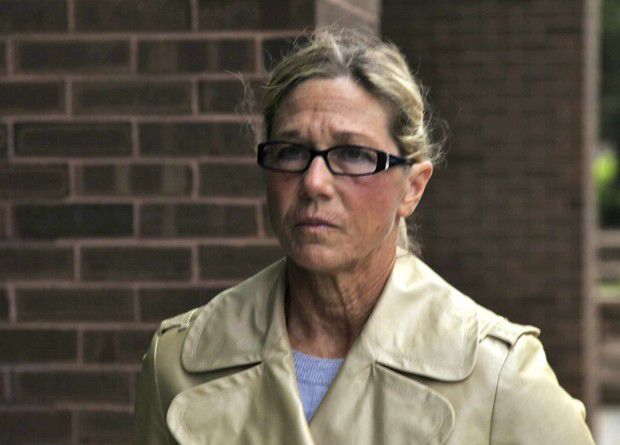 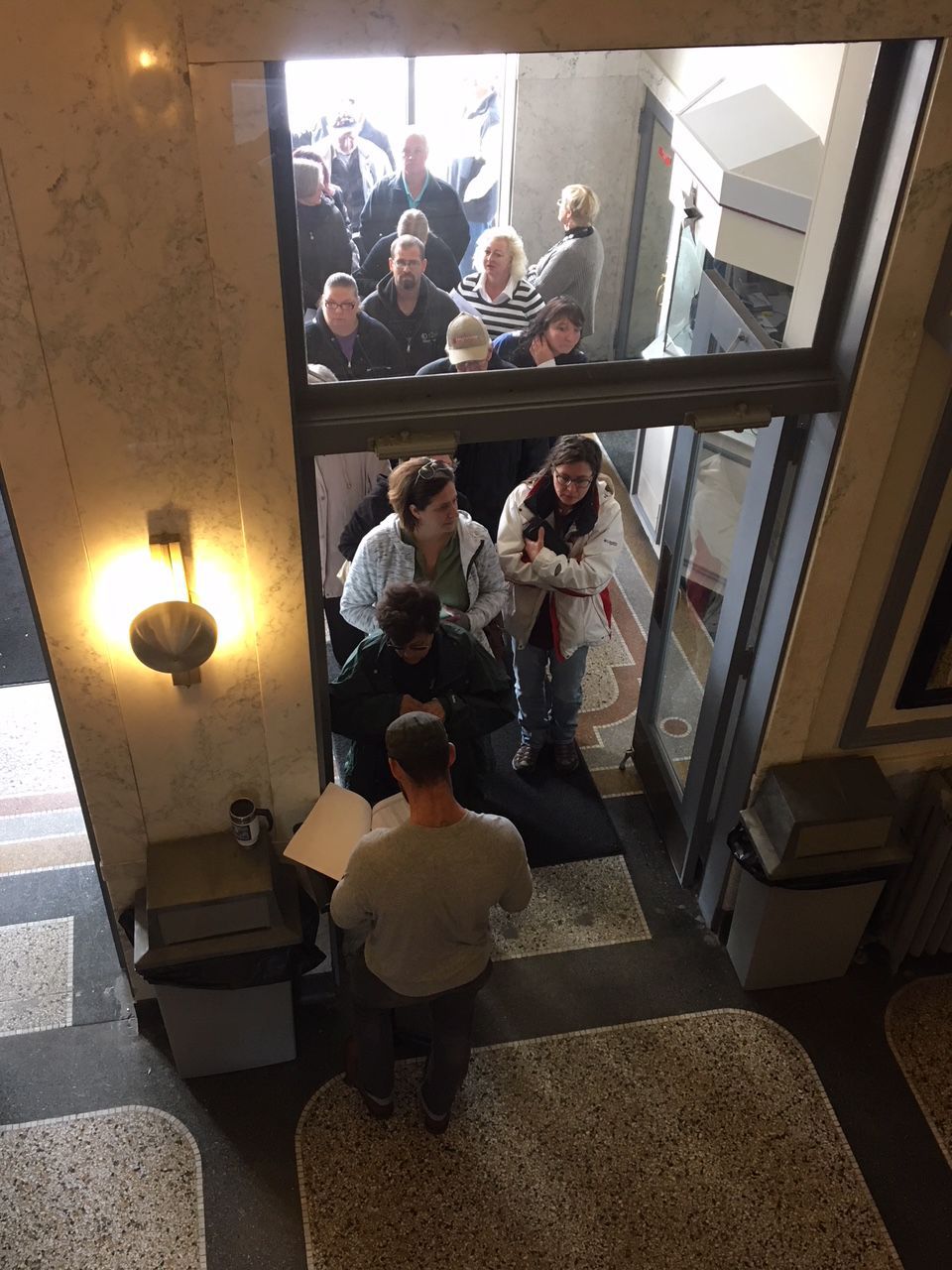 Crowds lined up early to screen "All the Queen's Horses" Sunday afternoon at the Historic Dixon Theatre in Dixon, Illinois. The movie about city comptroller Rita Crundwell, who embezzled nearly $54 million from the city, played to a near sold-out crowd.

DIXON, Illinois — On Sunday, hundreds of Dixon-area viewers applauded a documentary about a fraud committed by a former Dixon city employee who is serving time in prison for the crime.

Rita A. Crundwell was the comptroller for two decades in the town of 15,000 people about 70 miles northeast of the Quad-Cities. During that time, she stole nearly $54 million from taxpayers to build her quarter-horse empire and support her lavish lifestyle.

Under the title of the film, “All the Queen’s Horses,” was this question: “How could one woman steal $53 million without anyone noticing?”

Many of the people in the audience of about 900 at the Historic Dixon Theatre (it seats 953) knew Crundwell personally.

Kelly Richmond Pope, the director, took the stage to briefly introduce the movie, which opens with sights familiar to Dixon residents, from the town’s arch to images of President Ronald Reagan, City Hall and the water tower.

Several people, including Pope herself, appear on-camera to discuss how the crime was committed and how it was uncovered. Those interviewed include Kathe Swanson, who, while she was filling in for Crundwell, requested bank statements to produce a report.

Swanson saw an account that was unfamiliar. In an interview, she says she did not know what to do at first. “I sat on it for a couple of days,” she said.

Eventually, she told then-Mayor James Burke about her discovery, and he contacted the FBI. Also interviewed is FBI Agent Todd Carroll, who discusses the investigation, the crime and its aftermath.

The investigation continued for six months, until the day Burke called Crundwell on the intercom to tell her “These gentlemen would like to ask you a few questions.”

She gave an interview that lasted an hour and a half. “She was in there singing like a canary,” Burke says in the film in a moment that drew laughter from the audience.

Crundwell was convicted in 2013 of fraud because, over two decades, she diverted more than $53 million in city funds into her own bank account. She kept careful records in a crawlspace in her home, taking the first funds in 1991. Using easily understandable graphics, Pope explains how Crundwell used phony invoices and a secret account to take the money.

The documentary includes video and photos of Crundwell, who declined to be interviewed for the movie.

In an interview, Pope said she wanted to emphasize how crimes like this happen. “To me, Rita represents a couple of people in all organizations: The very trustworthy employee, hard-working and knows her job. She also represents that person we ultimately trust," she said.

The movie took about five years and three months to make. “It was important to let the case happen,” she said. “You see this to the end. Rita’s imprisoned, her appeal process is over.”

“What I hope is that people can see that they can embrace this situation and use it to help other towns across the world,” Pope said.

“Kathe Swanson (then Dixon’s city clerk) becomes our focal point. Without Kathe, this would not have come to light. In my opinion, the documentary is really more about Kathe,” Pope said. “After fraud happens, the next question becomes how was it discovered.”

“Once I got Kathe’s interview secured, I knew I had a great documentary,” she said.

Swanson, who has since retired as city clerk, was in the spotlight — quite literally — immediately after the movie, when Pope presented her with an ethical courage award from the National Association of State Boards of Accountancy Inc. Many members of the audience gave Swanson a standing ovation.

Swanson said her interview in the film “was something that had to be done,” adding that Pope was kind to her “and guided me through the whole process.”

She’s enjoying her retirement, spending time with her grandchildren and traveling.

She takes some of what Crundwell did personally. Crundwell told some people that her father had worked for Campbell Soup Co. and left her stock – a life experience that belongs to Swanson, she said.

“She used that in her lies,” Swanson said.

After the presentation, Pope again took the stage to take questions from the audience. One man thanked her for the closure and drew applause again.

Lots of people stuck around to discuss the movie with each other. “It was eye-opening,” said Rita Sholders, of Dixon. “It was very well-done.” The film shows that “the system works,” Sholders said, praising Swanson. “She saved our town.”

Her husband, Earl Sholders said he thought the movie was “great – very informative.”

This director’s biography would, well, make a great documentary.

Kelly Richmond Pope is an associate professor in the School of Accountancy and MIS at DePaul University. She earned her doctoral degree in accounting from Virginia Tech and is a licensed certified public accountant. She worked in the forensic accounting practice at KPMG, LLP on anti-money laundering engagements, insurance fraud investigations and fraud risk management projects.

Her fraud research has been published in leading academic journals such as “Behavioral Research in Accounting, Auditing: A Journal of Theory & Practice,” and “Journal of Business Ethics.: She co-wrote “The ABCs of Behavioral Forensics: Using Psychology to Prevent, Detect and Deter Fraud.” Additionally, she is a freelance writer for Forbes.com, The Daily Beast and The Washington Post.

Originally from North Carolina, she has lived in Chicago the past 12 years. “I first heard about the story when it hit the Chicago Tribune in 2012,” she said.

Her company, Helios Digital Learning, develops “video-enhanced cases that students use around the country in their business courses.”

“We have a team of people, and we go around the country and we do these forensic/ fraud interviews,” she explained. “I said to my team, ‘This would be a great story to turn into a documentary.’

She participated in the inaugural Kartemquin's Diverse Voices in Docs fellowship program sponsored by The Academy for Motion Picture Arts & Sciences, and began filming “All the Queen's Horses” shortly after Rita Crundwell’s arrest in 2012.

“Once I graduated from the program, Kartemquin came on as a co-producer of ‘All the Queen’s Horses,’” she said.

As the story started to hit the media, “What I was really starting to get concerned about is that there was so much emphasis on ‘Rita Crundwell stole this money and bought these horses and look at the lavish life she lived.’”

But “How does a fraud like this happen? This is not a Dixon issue,” Pope said. “This is an everybody everywhere issue.”

The movie, which will run in Chicago next month, will be available via video-on-demand in 2018, and will continue to be shown at various screenings and film festivals.

Corporate sponsors that brought the film to Dixon – there was no charge for tickets – were Workiva, based in Ames, Iowa and BMO Harris Bank, based in Chicago.

As for future filmmaking, “I am a teacher at heart,” she says. “That is who I am. I feel like I’m teaching through film. I just posted a great image yesterday, saying ‘Numbers tell the best stories.’

“I’m really not doing anything different besides using a different medium using the same kind of information I use from a book,” Pope said.

“I will say that filmmaking is hard,” she continued. “It’s a very tough process. It seems like only a few people hold the power and the resources to get something done.”

The documentary was submitted to the Martha’s Vineyard African American Film Festival earlier this year, and earned the Best Documentary award. “We have a couple other festivals that we will attend throughout this year and next year,” Pope said. “We’re going to keep going. We hope that we can get to as many people as we possibly can.”

The U.S. Marshals Service provided a glimpse of the Rita Crundwell ranch near Dixon, Ill.

A production still for the documentary, "All the Queen's Horses," about Rita A. Crundwell, who embezzled nearly $54 million from the city of Dixon. The movie was screened to a near sold-out crowd in Dixon Sunday.

Kelly Richmond Pope, director of "All the Queen's Horses," gives an award from the National Association of State Boards of Accountancy Inc. to Kathe Swanson, former city clerk of Dixon, Illinois, on Sunday at the Historic Dixon Theatre.

Much of Rita Crundwell's property is auctioned.

Crowds lined up early to screen "All the Queen's Horses" Sunday afternoon at the Historic Dixon Theatre in Dixon, Illinois. The movie about city comptroller Rita Crundwell, who embezzled nearly $54 million from the city, played to a near sold-out crowd.