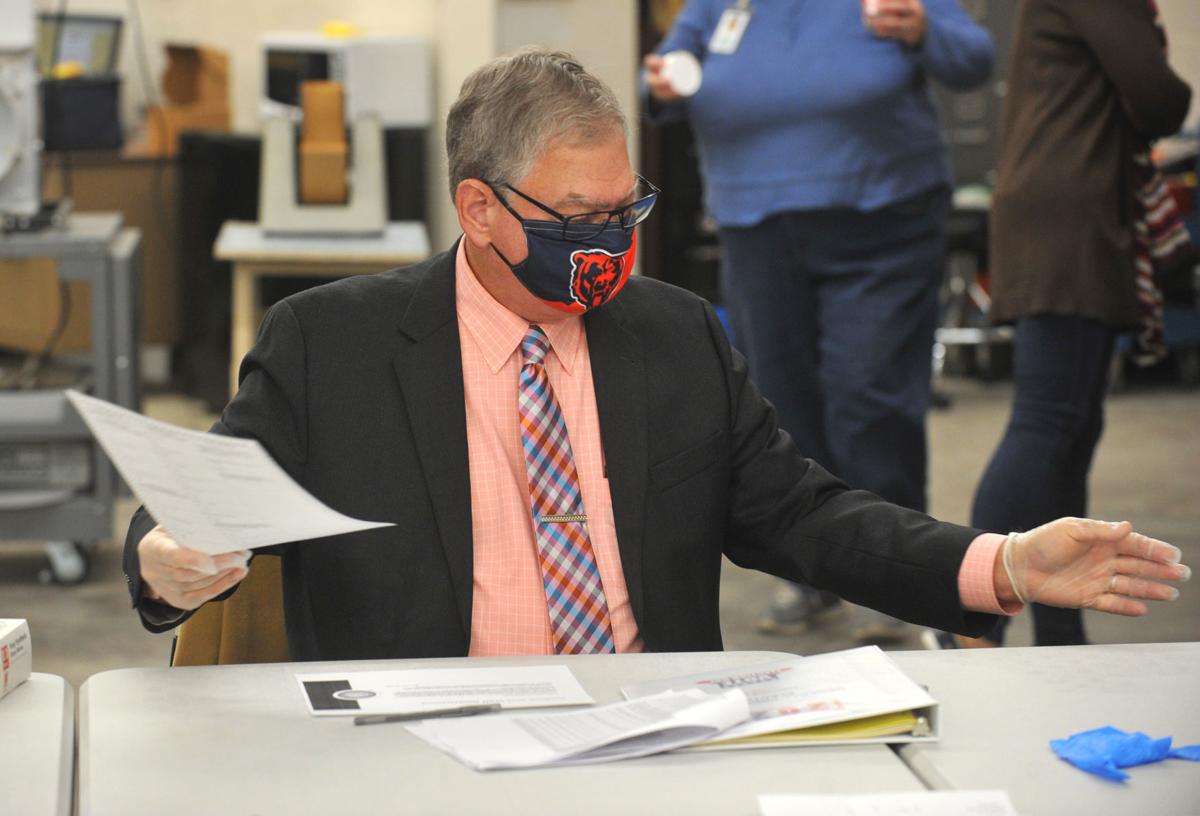 John Nahra looks over ballots cast in Iowa’s 2nd congressional district race Tuesday. Nahra, a mutual representative, is part of a three-member recount board chosen by the campaigns for the recount and re-examining of ballots cast in the Scott County. 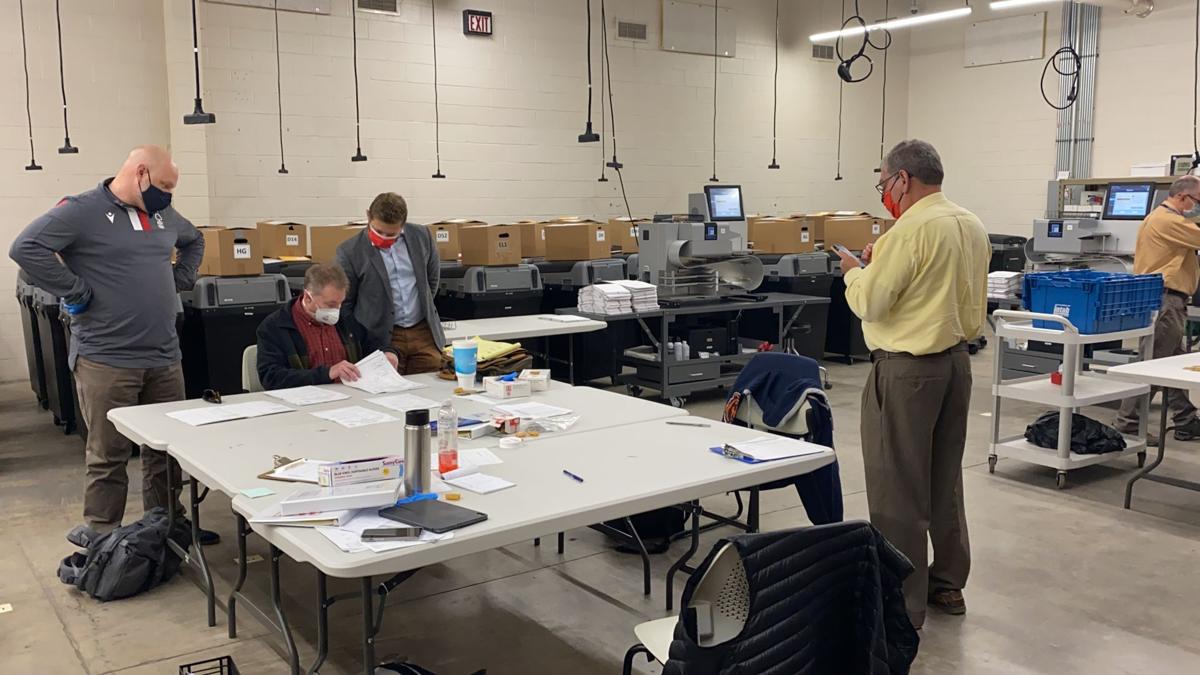 Representatives chosen by the campaigns for the candidates running in the still-uncalled Iowa 2nd congressional district U.S. House race review absentee ballots cast in Scott County as part of a district-wide recount on Thursday, Nov. 19, 2020. 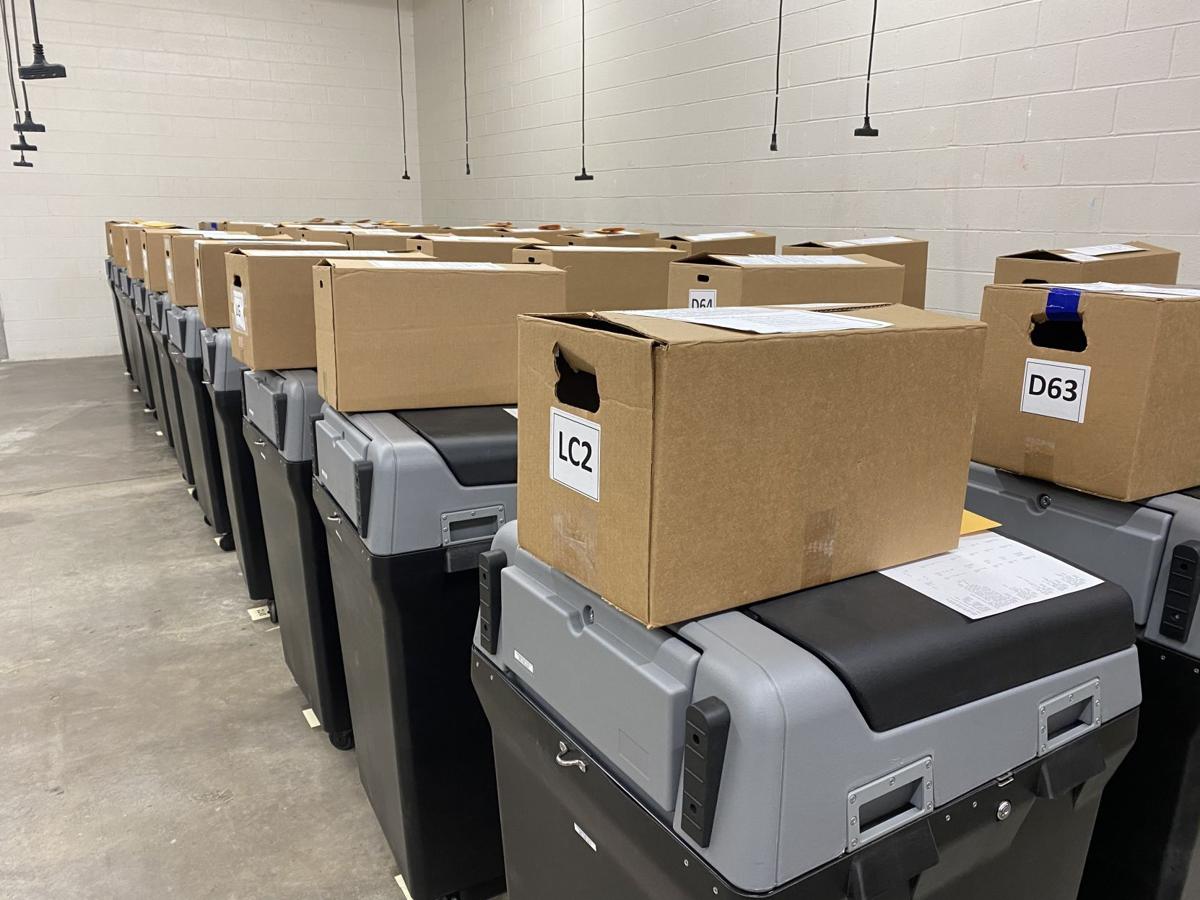 Questions over how best to recount a large number of absentee ballots has stalled what has already been a slow-moving recount process in the Iowa 2nd congressional district race.

Republican Mariannette Miller-Meeks of Ottumwa still held a narrow 47-vote lead over Democrat Rita Hart of Wheatland out of the more than 394,000 votes cast in the race, according to unofficial results.

As of Thursday afternoon, a three-member recount board had recounted approximately 28,000 to 29,000 ballots cast on election day in Scott County, but had yet to recount some 60,000 absentee ballots out of a total of roughly 90,000 votes cast in the county.

Johnson County had finished recounting about 23,000 out of some 80,000 ballots. Appanoose, Cedar, Clinton, Lee, Lucas, Monroe and Washington counties were also conducting recounts Thursday in the 24-county southeastern Iowa district.

Recount boards were conducting both machine and hand recounts of ballots cast in Scott and Johnson counties, using machines to separate and then hand recount ballots the machine has trouble reading.

However, some counties and recount boards have interpreted guidance from the Secretary of State to mean they cannot apply the law’s voter intent standards to any ballots in a precinct where a machine recount is being conducted, unless the board conducts a full hand recount of all the ballots in that same precinct.

With absentee ballots treated as a single precinct, and some 60,000 absentee ballots, the Scott County Attorney's Office deemed such a feat "an impossibility," given the time frame required by state law to complete the recount.

Counties have 18 calendar days from their canvass of votes to complete their recounts, which would be Nov. 27 or 28, depending on when they canvassed.

Assuming the recount board averages four ballots a minute, it would take it 250 hours, or more than 20 12-hour days, to hand count all 60,000-some absentees.

Of concern was the ability to check machine tabulations of ballots with stray marks, such as those with "hesitation marks" or where a voter had crossed out a mark for one candidate and selected another that was counted as an overvote, but where the voter's intent was clear. An overvote occurs when a voter casts a vote for more than the allowable number of candidates. An undervote occurs when a voter makes no selection in a particular race, or chooses fewer than the allowable number of candidates in a contest.

More than 200 identified overvotes and 18,000 undervotes in the district had yet to be examined for voter intent, according to Hart's campaign. More than 7,000 of those undervotes are in Scott and Johnson counties alone.

"This is significant because of the unusually large number of absentee ballots in this election (which the counties generally treat as a single precinct), and because of the likelihood that these ballots contain valid votes for the candidates which a machine recount will not detect," according to Hart's campaign. "There are enough ballots at stake here to decide the outcome of the election."

On Thursday, responding to a letter from Hart's campaign seeking to clarify guidance, the Iowa Secretary of State's Office said it was up to the discretion of county recount boards, based on guidance from the county auditor.

Contrary to assertions made by the Hart campaign, "undervotes and overvotes are not 'disregarded,' but rather counted in accordance with state and federal optical scan tabulation standards," wrote Molly Widen, legal counsel for the Iowa Secretary of State's Office.

A machine recount will provide a tally report that includes the number of overvotes or undervotes in a precinct. The recount board then can decide whether to review that precinct's ballots by hand to determine whether the overvoted or undervoted ballots show clear voter intent for a candidate in the race, Widen wrote.

"The machine recount of votes recreates the manner in which voters were tabulated on election day and is a check against any error, whether electronic or human," Widen wrote. "Should additional valid votes be determined, the appropriate step is to update the hand count tally for the precinct. Ultimately, the manner in which a recount board handles the mechanics of a recount is left up to the discretion of a majority of the board."

Assistant Scott County Attorney Robert Cusack, in an opinion requested by the Scott County Auditor, said the recount board's hybrid approach of machine and hand recounts — while "also time consuming" — was the only way to conduct the recount "as expeditiously as reasonably possible."

"Using the machine counting, in addition to hand counting the ballots cast that the machine cannot read, is consistent with the requirement to 'tabulate all votes,'" Cusack wrote. "A manual recount of all 60,000 absentee ballots is not required."

Republican Mariannette Miller-Meeks campaign issued a statement Thursday thanking the Secretary of State "for sticking with his original guidance regarding the hybrid recount scheme proposed by the Hart campaign and expect that all recount boards adhere to the best practices laid out by the Secretary of State."

The Miller-Meeks campaign spokesman on Wednesday claimed the Hart campaign was trying to "distort" the recount process and "plucking votes out and adding them to totals without checking if they have already been counted."

Also on Thursday, Michael Bousselot, a Davenport native and chief of staff to former Iowa Gov. Terry Branstad, replaced Richard Davidson on the Scott County recount board to represent the Miller-Meeks campaign.

Davidson stepped down due to the recount process taking longer than anticipated.

An individual involved in the Scott County recount not authorized to speak publicly, said he hoped to be done by Thanksgiving.

He added there was no way to know if the outcome of the race has changed until a recount of all absentee ballots have been completed.

Watch Now: How will Biden’s Environmental Protection Agency be different?

Watch Now: How will Biden’s Environmental Protection Agency be different?

John Nahra looks over ballots cast in Iowa’s 2nd congressional district race Tuesday. Nahra, a mutual representative, is part of a three-member recount board chosen by the campaigns for the recount and re-examining of ballots cast in the Scott County.

Representatives chosen by the campaigns for the candidates running in the still-uncalled Iowa 2nd congressional district U.S. House race review absentee ballots cast in Scott County as part of a district-wide recount on Thursday, Nov. 19, 2020.