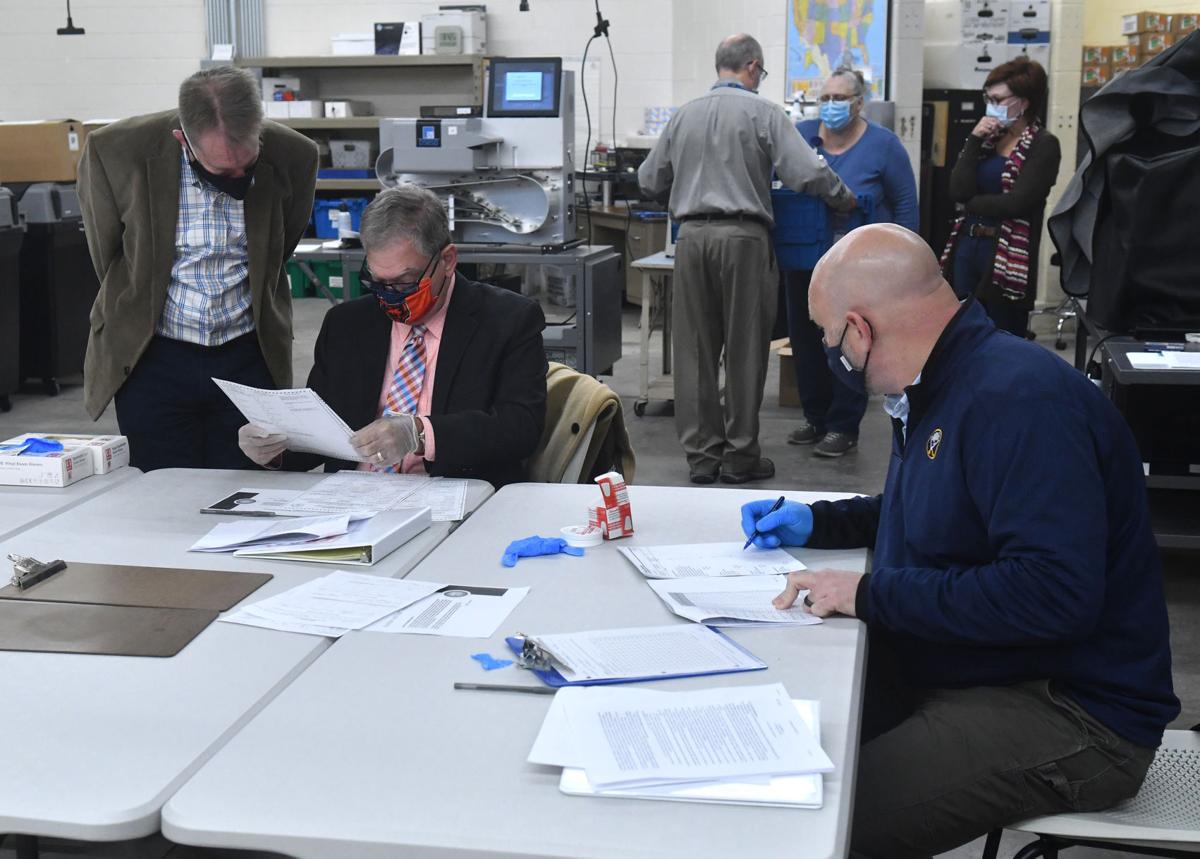 Richard Davidson, representative for state Sen. Mariannette Miller-Meeks, left, John Nahra, a mutual representative, and Ian Russell a representative for former state Sen. Rita Hart, look over ballots Tuesday. The three-member recount board was chosen by the campaigns in the Iowa's 2nd congressional district race for the recount and re-examining of ballots cast in the Scott County. 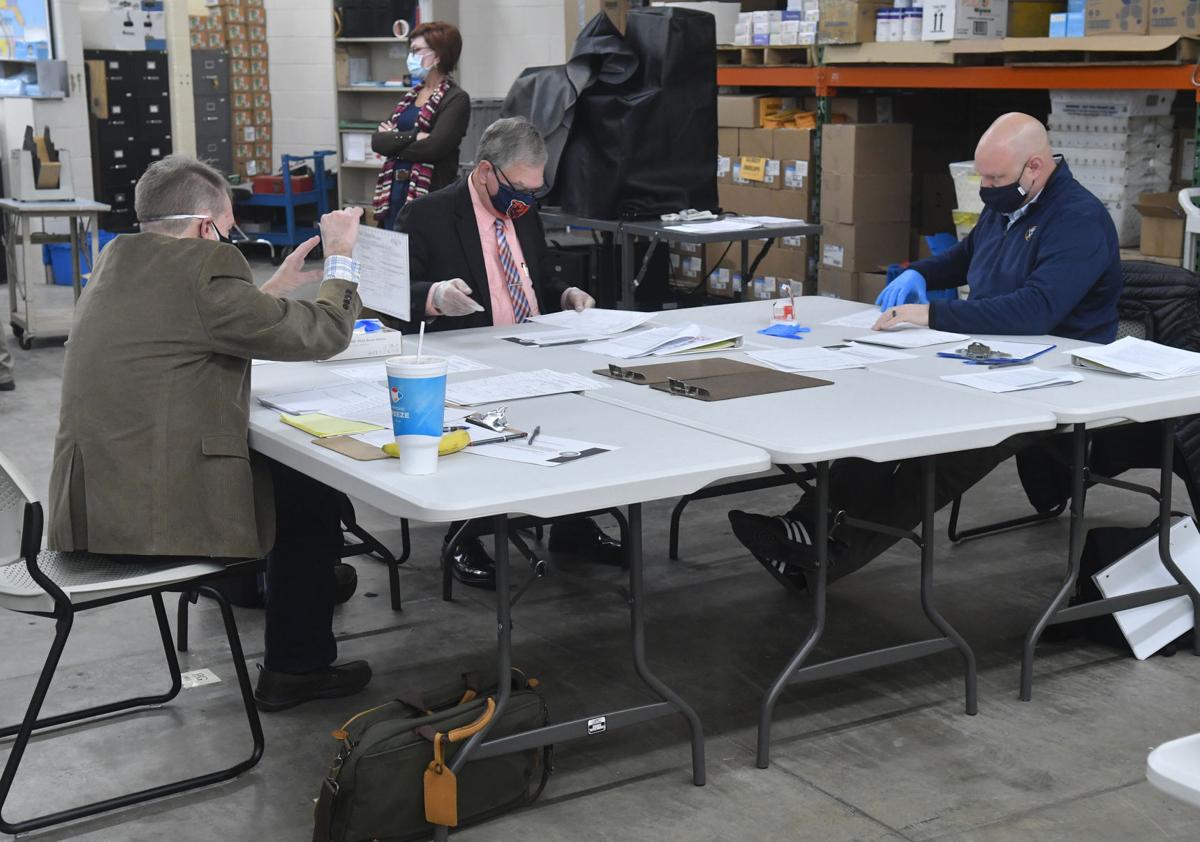 Richard Davidson, representative for Miller-Meeks, left, John Nahra, a mutual representative, and Ian Russell, a representative for Rita Hart, look over ballots. The three-member recount board was chosen by the campaigns in the Iowa's 2nd congressional district race for the recount and re-examining of ballots cast in the Scott County.

With more than 93,000 ballots to review and examine in the state's third-largest county, it could take days to complete a recount in Iowa's still uncalled 2nd congressional district race.

That was the assessment Tuesday from Scott County Auditor Roxanna Moritz as a three-member recount board convened at 8 a.m. at the former minimum-security jail turned county warehouse-building on Tremont Avenue in Davenport to begin the recount process.

"This is big — the sheer volume of doing this many counties," Iowa Secretary of State Paul Pate said of the district-wide recount.

Pate stopped in Davenport Tuesday morning to observe the recount, the first to take place in the still-too-close-to-call U.S. House race.

Republican state Sen. Mariannette Miller-Meeks of Ottumwa still holds a 47-vote lead over Democratic former state senator Rita Hart of Wheatland out of the more than 394,000 votes cast in the race.

Hart has requested a recount in all 24 counties in the southeastern Iowa district.

During the last two weeks, the race has see-sawed back and forth by slim margins between the two candidates due to reporting errors discovered in precincts in Jasper and Lucas counties.

Miller-Meeks has claimed victory, and both candidates were in Washington, D.C., last week to participate in orientation for new members of Congress.

Counties have 18 calendar days from their canvass of votes to complete their recounts, which would be Nov. 27 or 28. And state election officials will need amended results by Nov. 30 in order to certify the general election results statewide and declare an official winner. The Associated Press also announced it will not call the race until then.

"So the clock is ticking," Pate said. "Scott County is ahead of the game, and I applaud them for that."

Pate said most recounts in other counties should start later this week, with heavily Democratic Johnson County schedule to begin its recount on Wednesday.

Pate said both Scott and Johnson counties, the two largest counties in the congressional district, will be the ones to watch that could swing the outcome in the race.

Miller-Meeks run up the score in rural counties, flipping counties that voted for President Donald Trump but backed retiring seven-term Democratic incumbent Dave Loebsack in 2016, while cutting into Hart's margin of victory in the four Democratic counties she won -- Scott, Clinton, Johnson and Jefferson counties.

Hart received roughly 70% of the vote in Johnson County, but Miller-Meeks outperformed President Donald Trump in the county by about 1,170 more votes, while Hart received about 3,000 fewer votes than President-elect Joe Biden.

Tim Hagle, associate professor of political science at the University of Iowa, and Grant Woodard, a Des Moines attorney and former Iowa Democratic campaign operative, said Hart will want to focus on Johnson County in the hopes of squeezing out a few more votes. Registered Democrats outnumber registered Republicans more than 2-to-1 in the county, making up for any Republican registration advantages elsewhere in the district.

The three-member recount board -- picked by the campaigns -- does not analyze or review any ballots that were not previously counted, and will not analyze or review canceled, defective, provisional, rejected or spoiled ballots, as election officials have already made decisions regarding whether these ballots should be counted, Pate said. Rather, the board will be looking for anomalies that might have happened on Election Day and whether election officials tabulated votes that may not have been counted appropriately or correctly.

"Their main purpose today and the next two days, probably, is to make sure the math is accurate," Pate said. "Unless there's some significant gaffe, you don't see a lot of movement (in a recount). Because, typically, the trend that you had in the original county would continue. Meaning if one candidate was getting two votes to the other candidates one or one and a half (votes), that ratio tends to stay the same."

But with a margin of just 47 votes, "I think there's a lot of potential for the vote to sway one way or the other. We'll know more of that as each county comes in," Pate said.

The Secretary of State again credited the checks and balances built into the system for their ability to catch reporting errors early and fix them before results were certified.

"We've had four recounts now and three post-audit elections (since being elected to the office 12 years ago), and every one of them have came out (the same as on election night)," with the exception of a one vote difference in the 2019 Davenport mayor's race due to a mismarked ballot where the board could clearly identify the voter's intent, but the machine could not, Moritz said.

As of 4 p.m., the thee-member board had completed recounts of 17 out of 63 precincts. Moritz said the board will reconvene Wednesday and that the recount could last through the end of the week.

Richard Davidson, representative for state Sen. Mariannette Miller-Meeks, left, John Nahra, a mutual representative, and Ian Russell a representative for former state Sen. Rita Hart, look over ballots Tuesday. The three-member recount board was chosen by the campaigns in the Iowa's 2nd congressional district race for the recount and re-examining of ballots cast in the Scott County.

Richard Davidson, representative for Miller-Meeks, left, John Nahra, a mutual representative, and Ian Russell, a representative for Rita Hart, look over ballots. The three-member recount board was chosen by the campaigns in the Iowa's 2nd congressional district race for the recount and re-examining of ballots cast in the Scott County.