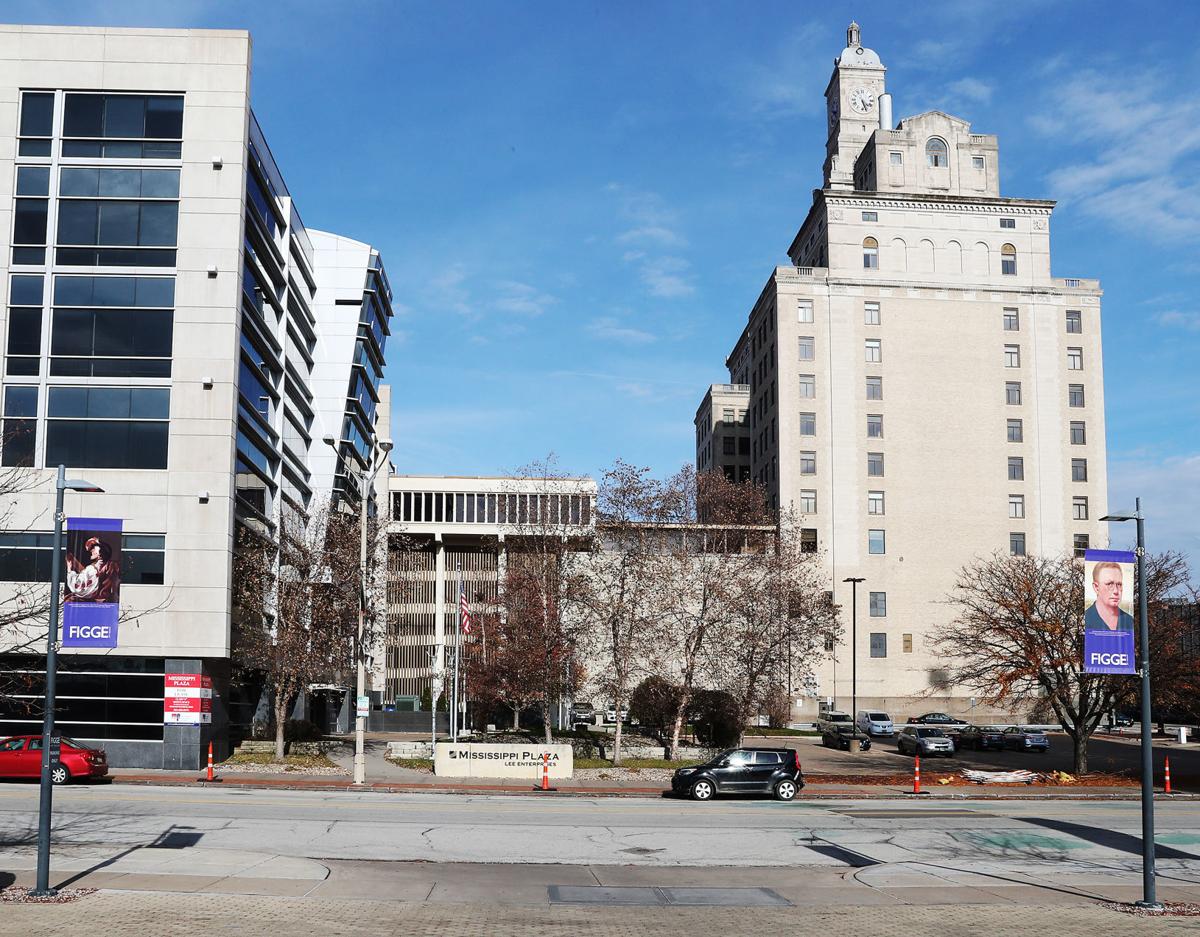 The Mississippi Plaza, 201 N. Harrison St., could be a 106-unit apartment built with commercial/retail space and an outdoor pool. 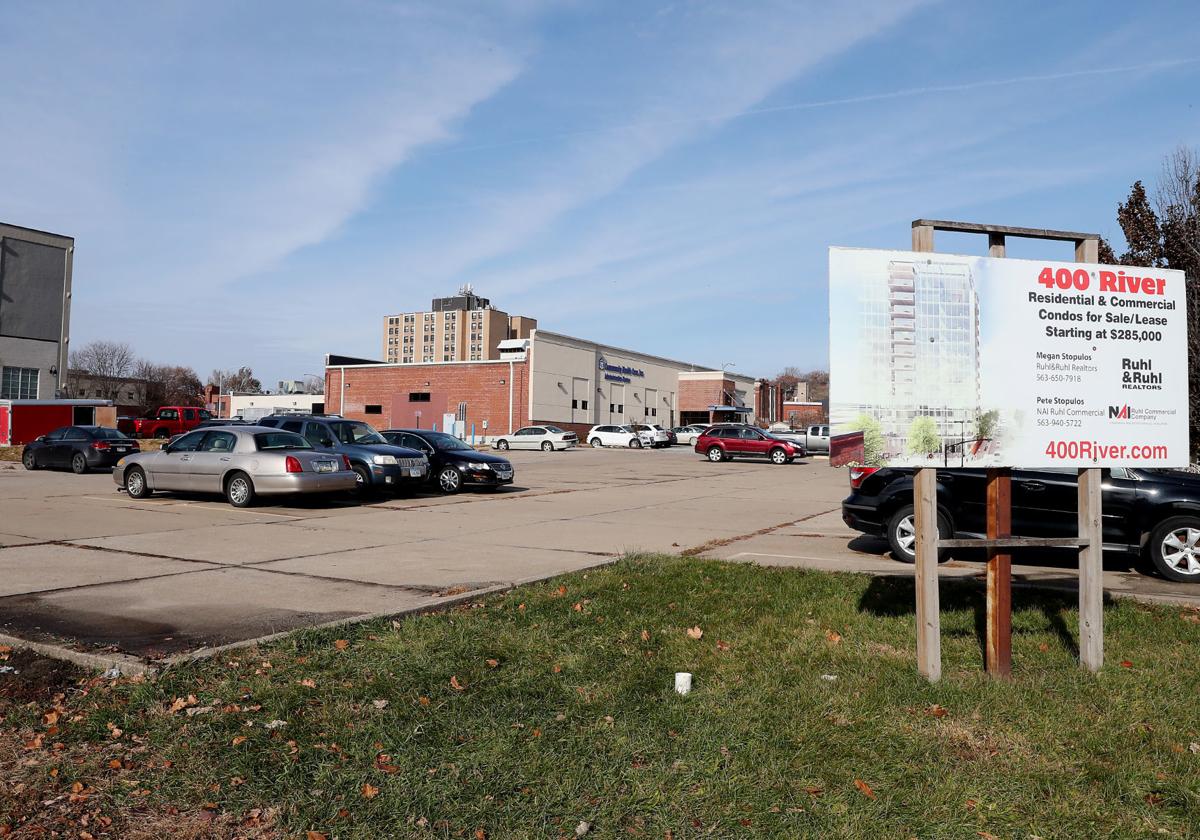 The parking lot at 400 W. River Drive could be the site of a five-story, 55-unit apartment building with underground parking and a roof deck. 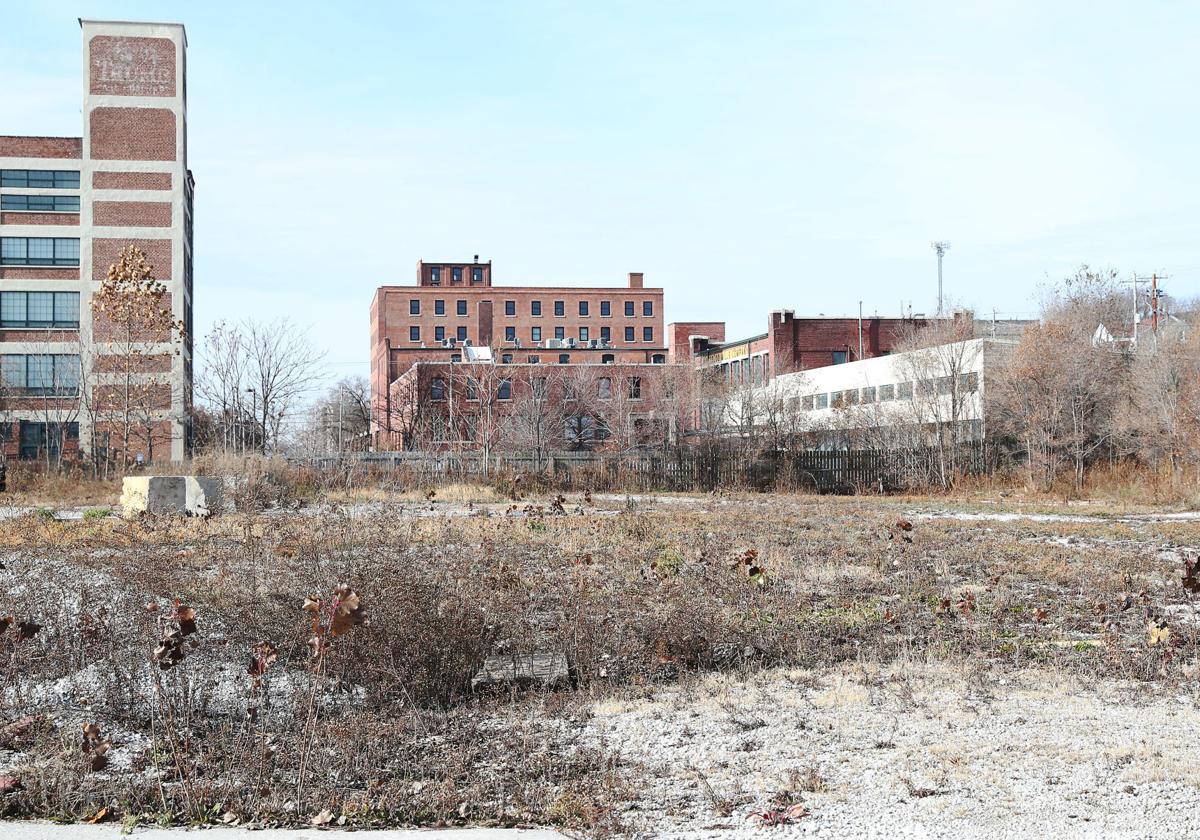 A four-acre site in the 500 block of LeClaire Street — west of the Scott County Y under construction — could be the site of a new, four-story apartment building called The Yard. 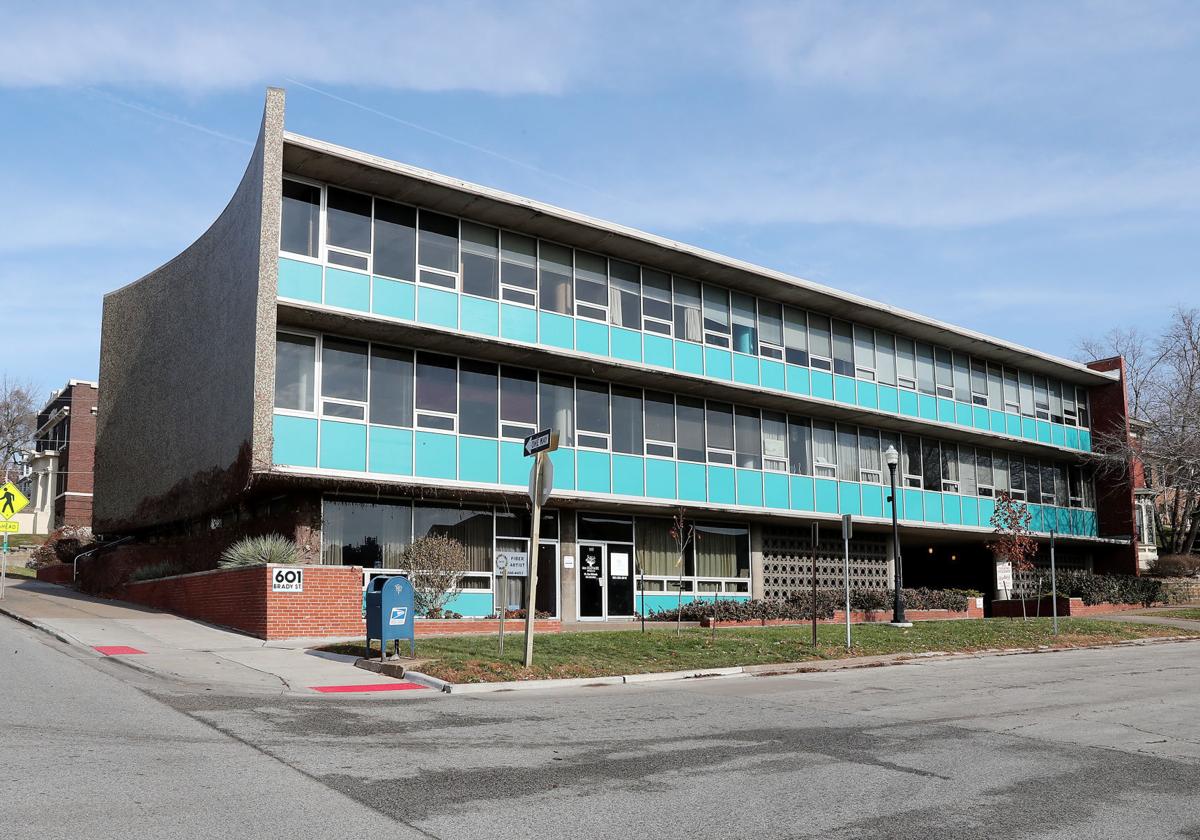 The mid-century Priester Building, 601 Brady St., could be renovated into 33 apartments. It is on the National Register of Historic Places. 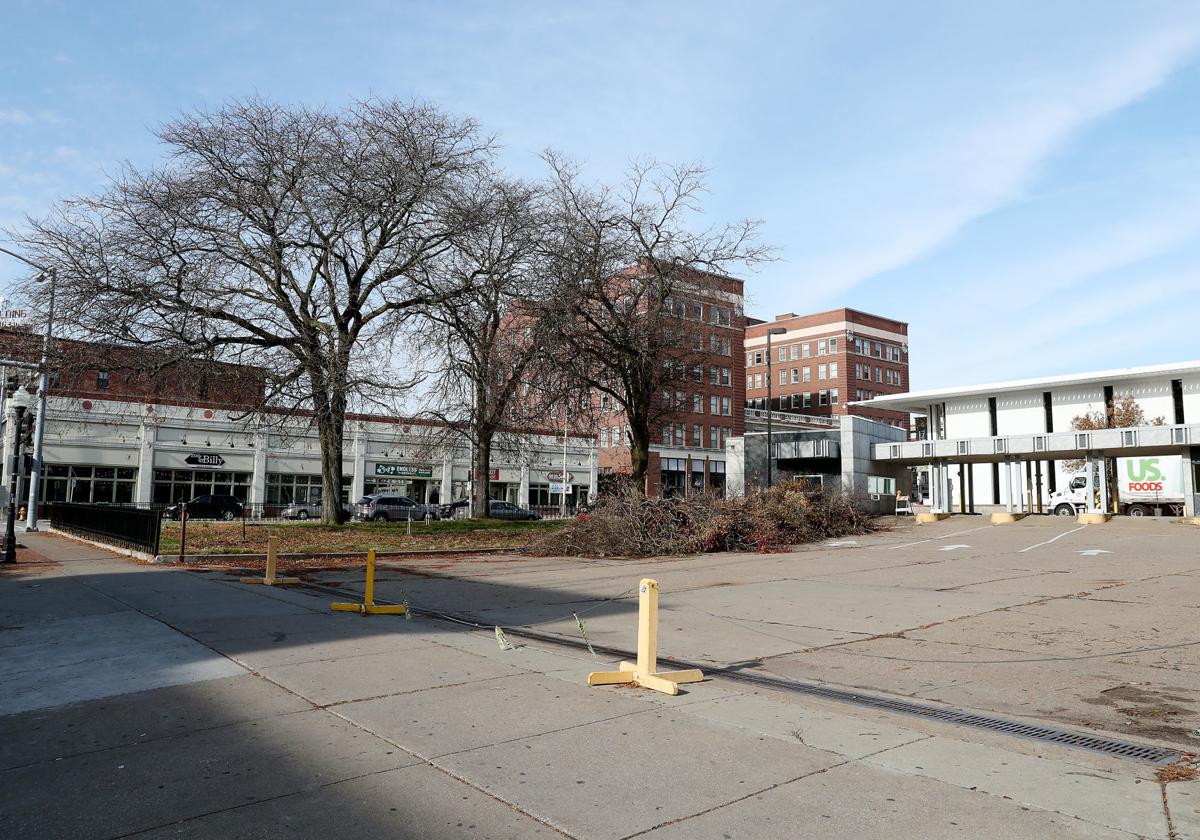 The drive-through of the former Davenport Bank & Trust Co./Wells Fargo bank south of the Davenport Library, could become the site of a new, four-story apartment building.

Developers recently approached the city of Davenport with five different projects that, if built, would add 506 market-rate apartments to downtown at an estimated investment cost of $61.8 million.

A sixth project, with 60 units pegged at $8 million, has been under consideration since summer, boosting the total number to 566 units and investment to $69.8 million. The five most recent proposals are:

• A new, four-story building west of where the new Scott County Family Y is being built off of 4th Street, proposed by TWG Development, Indianapolis. 185 units, $29.4 million.

Developers of all projects have asked for — and received — support from the city in seeking Workforce Housing Tax Credits from the Iowa Economic Development Authority to help pay for their projects.

City support and a local match equal of at least $1,000 per unit are requirements in applying for the credits. Local matching funds may include tax abatement, grants, reimbursements or other cash or cash equivalents.

These applications are all coming in at once because the state economic development authority announced just last month it is making $10 million of the tax credits available to projects in 10 counties, and awards will be on a first-come, first-served basis, said Bruce Berger, the city's economic development director.

The credits are available in counties declared disaster areas by the federal government because of flooding.

Developers may receive credits of up to 20% of the cost related to construction/rehabilitation. The sale of the credits to investors can be used as equity in the project. Each project is capped at $1 million.

In addition to the five projects that came before the city council within the past month, the city already had been working with Merge Urban Development, Cedar Falls, Iowa, that wants to build a five-story building on city-owned property south of the RiverCenter that would provide 60 apartments and several small retail spaces.

Merge has offered $250,000 for the city-owned property, but the deal hasn't closed yet, Berger said.

What are the chances?

What is the likelihood that all these projects will be approved?

"In the real world, it's probably unlikely that all six (projects) would be approved at once," Berger said.

But the applications show developer interest and indicate projects that might get done over the next few years.

Since the recent revitalization of the downtown began about 2000, at least 1,094 apartments have been built or substantially renovated, according to the Downtown Davenport Partnership, an arm of the Quad Cities Chamber of Commerce.

A housing study performed by the Downtown Davenport Partnership in 2017 found that area rental units were within a healthy occupancy range of almost 97%.

If all proposals on the table were built, it likely would take a couple of years for the market to absorb them all, Berger said. But only the market will determine if there are too many.

Whether these projects will be built without the tax credits is impossible to say, Blackwell, of Financial District Properties, said.

But he has confidence in the downtown housing market and the revenue side of any project. "It seems to me, I'm downtown every day, that the nightlife is amazing," he said. "People are running around having fun, good fun. There's a lot of foot traffic. They're coming from everywhere. ... At some point, they say, 'Well, why don't I just live here?'

"It seems to me that kids and all these people want to live in the heart (of the city) — the nightlife, the dining."

He attributed much of the uptick to the opening of the Urban Campus of Scott Community College.

Other downtown projects Blackwell has completed — 68 residential units in the Union Arcade and 30 units in the former Davenport Bank & Trust Co./Wells Fargo — are doing well.

So the question of whether these projects will proceed without tax credits comes in on the expense side, not the revenue side, Blackwell said, referring to what will happen to construction costs and interest rates. And that, he said, is impossible to say at this point.

A closer look at four of the projects:

• The project at the new Y would be called The Yard and would sit on four acres. At this point, the Y still owns the land, said Frank Klipsch, corporate communications director for the Y. "We've had a few suitors, but nothing has been finalized," he said.

TWG Development, the company that proposed the project, manages 1,000 units in Iowa and 5,000 nationwide, according to its website.

• Building a multi-family apartment building at 400 W. River Drive "just made a lot more financial sense" than pursuing the luxury condominium project, developer Stopulos said. It would have been "harder for us to absorb the financial risk" on a $15 million project with only five pre-sold units, he said.

With the apartments, he envisions a building with 35 spots of covered parking under the building in addition to surface spots, and a roof deck across the entire front.

• The five-story Mississippi Plaza office building north of the Figge Art Museum was heralded as a breakthrough in downtown development when the $14.3 million project opened in April 2004.

The 90,000 square-foot building was lauded as "the first Class A multiple tenant office space built in the downtown in 20 years."

It was the new headquarters for Lee Enterprises, which publishes the Quad-City Times, Moline Argus-Dispatch, Muscatine Journal and other newspapers. It also was home to RSM McGladrey, a business services firm, and a year after it opened, the builder, Ryan Cos. moved there. The downtown's first Starbucks coffee shop also was a tenant.

But, in time, they all left, with Lee vacating this year.

In addition to apartments, the project would include 4,600 square feet of commercial/retail space and an outdoor pool, according to paperwork filed with the city.

Because all new city projects now require streetscaping, with the owner, the Downtown Davenport Partnership and the city chipping in, it was decided that streetscaping costs would be the city's contribution, Berger, of Davenport, said.

Because the cost for an entire block can range from $180,000 to $250,000, including new sidewalk, brick inlays, conduit for street lights, the lights themselves and furniture, the city would easily reach its commitment of $106,000, he said.

• Renovation of the Preister Building also would be eligible for state and federal historic tax credits because it was listed on the National Register of Historic Places several years ago. Its proposal also anticipates using some city HOME financing (federal money) that may require three units to be rented to people with an income limited to 60% of the area median.

Developer Newbury Living has built several projects in the Quad-Cities, including The Bridges Lofts, Bettendorf, and 501 Brady, Davenport. It is now constructing apartments in a former bank most recently used as the administrative headquarters of the Davenport Community School District, 1606 Brady St.

The workforce housing tax credit funding is part of the Empower Rural Iowa Act, approved during the 2019 legislative session and designed to encourage housing rehabilitation and development in communities that have lost housing or can demonstrate a housing need as a result of a disaster, according to a news release from the Iowa Economic Development Authority.

The completion this summer of 113 apartments in the Gordon-Van Tine Commons, East River Drive and Federal Street, brings to at least 1,094 the number of new or substantially renovated apartments that have been created in downtown Davenport since 2000.

Also under construction this summer were 11 apartments in the former Hiberian Hall, in the 400 block on Brady Street.

The six projects described here would add 566 units to that number.

It took four years and nearly $37 million, but the renovation of the historic Gordon-Van Tine Commons in Davenport is finished, and its owners…

'I can envision people living in here and being happy with it': Old Pine Knoll will become senior apartments

The former Pine Knoll hospital sanitarium, a building with a long history in Scott County, has been purchased by Quad-City developer Chris Ale…

The historic Kahl Building in downtown Davenport has been sold for $2 million to Jim Bergman of JNB Capitol Building, Bettendorf, who will tur…

The Mississippi Plaza, 201 N. Harrison St., could be a 106-unit apartment built with commercial/retail space and an outdoor pool.

The parking lot at 400 W. River Drive could be the site of a five-story, 55-unit apartment building with underground parking and a roof deck.

A four-acre site in the 500 block of LeClaire Street — west of the Scott County Y under construction — could be the site of a new, four-story apartment building called The Yard.

The mid-century Priester Building, 601 Brady St., could be renovated into 33 apartments. It is on the National Register of Historic Places.

The drive-through of the former Davenport Bank & Trust Co./Wells Fargo bank south of the Davenport Library, could become the site of a new, four-story apartment building.