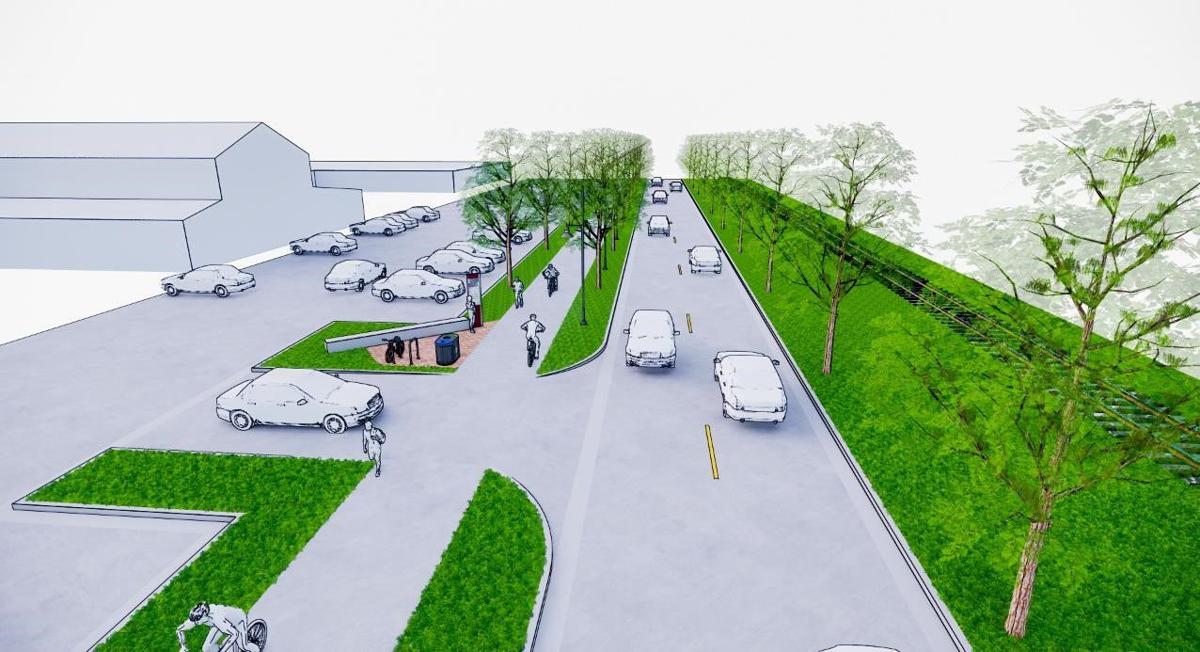 This is how part of 12th Avenue in East Moline would look after the streetscape project is completed near the Rust Belt. 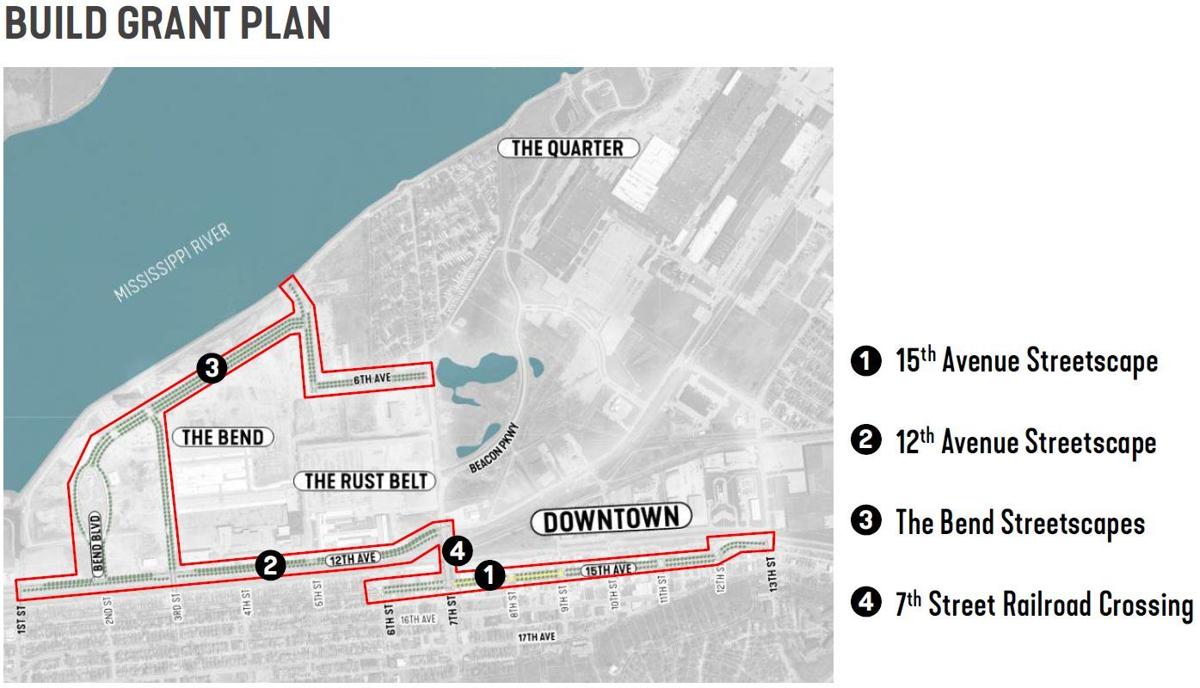 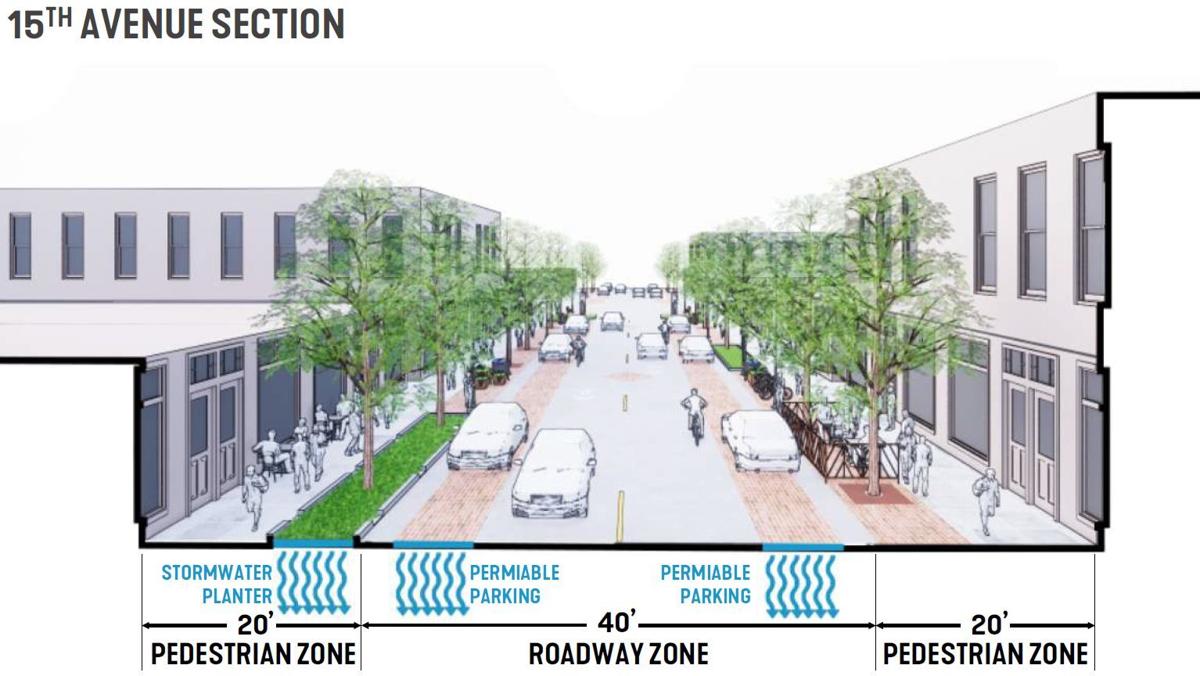 This is how downtown East Moline along 15th Avenue would look after the streetscape project, narrowing the street but widening the pedestrian areas in front of the businesses. The city did not get the grant it hoped to receive to start the work.

East Moline has The Bend.

East Moline has a new library to be opened sometime in 2021.

East Moline has The Quarter, an expansive potential development behind Deere Harvester near the river, and it has the Rust Belt concert venue.

What it doesn’t have is anything that ties all those venues together.

That’s one of the main reasons behind the Streetscape Plan, as well as the effort to get the approximately $25 million BUILD grant and possibly other grants after that.

East Moline expects to hear within a month if it is selected for the grant, which would launch the entire project in a magnificent way.

The $36 million Master Plan contains everything East Moline would like to do with its downtown area whereas the $25 million Streetscape plan offered for the BUILD grant contains the highest priorities at this time.

The BUILD in the BUILD Grant stands for Better Utilizing Investments to Leverage Development. It is a USDOT grant in which two are given out to each state each year. Last year, in Illinois, one went to Chicago and the other to Bloomington-Normal.

East Moline is seeking the grant this year and has hired the civil engineering firm of Veenstra & Kimm along with the design team of SmithGroup to help write and display its plans for its application and formulate its plan.

The Master Plan for the streetscape project was formally approved unanimously at Tuesday's council meeting.

East Moline city engineer Tim Kammler believes the grant could be momentous for the city.

“I think it would be absolutely historical for East Moline,” he said. “It would be a game changer in East Moline’s history at this point."

Mayor Reggie Freeman thinks the streetscape project could help a lot, too.

"I think this will help revitalize the downtown,"he said, and build on momentum that has already started with the addition of some restaurants. "Along with the downtown East Moline downtown Main Street people, this is going to help bring people downtown."

The project will provide connectivity between the downtown, The Bend, the Rust Belt and the Quarter, but also “a cohesive development look within the downtown,” Kammler said. “One of the things we want to do is draw people, draw the community to the Greater Downtown area. Whether it’s a concert, or a bite to eat, or a drink or just a stroll down the street, we want to have a place where people feel welcome and are joining the downtown districts together.”

He also believes the city is well positioned to get the grant.

“We are kind of ripe for development,” Kammler said. “With the goals of the master plan and the BUILD Grant, what we are hoping to do is capitalize on all of this investment.”

“The city has put a bunch of money into the ground,” he said, noting infrastructure, etc., already spending $11.25 million.

“Local developers have put in a hotel and convention center (Hyatt Place and Hyatt Hotel and Bend Xpo,) at the Rust Belt Center,” he said. “East Moline has invested $10.2 million of local dollars into the redevelopment of the old Case property. And next to it. We’ve put that money into the ground as part of a redevelopment agreement.

"So as part of that redevelopment agreement, the Hyatt is in there, the River Bend Commons apartments are there, the Meechum East Moline Expo Center (Bend Xpo) is going in there. So there has just been a lot of excellent return on investment.  There’s a lot of exciting development that's underway. And there's still room for more.”

Jason McKenzie, who helped the firm of Veenstra & Kimm prepare a master plan of the downtown and the Bend and develop the city’s Build Grant application, certainly believes East Moline has a chance to get the grant, too.

Complete street means the street will have areas for pedestrians and bikes as well as incorporates areas for mass transit.

The cost/benefit analysis is upwards of $8 for every dollar of investment from the federal government. "I doubt that very few applications are going to have that kind of CBR (cost benefit ratio)," Kammler said. "East Moline is a place where a little bit of money can go a long way. The environment is ripe for reinvestment. That cost benefit analysis proves it."

The grant application in its entirety can be found on the city’s website at https://www.eastmoline.com/408/BUILD-Grant

A steering committee, the city council, consultants, and stakeholders complete with public input has been working on this project since February. However, potential streetscape for downtown has been studied for several years.

Its goal, according to its application is to create a comprehensive, sustainable Greater Downtown community that better integrates key goals of economic prosperity, social vibrancy, ecological integrity and human experiences.

"We want to take what is here and try to make where it's something cohesive and connected," Kammler said.

Simple improvements downtown would include two-lane streets with parallel parking which would allow for more room for expanded outdoor seating for restaurants or trees or park benches.

"It's a huge thing for these downtown restaurants," Kammler said. "They want to have outdoor seating."

The areas would also have permeable pavement on the edges, he said, allowing for storm water to go into the ground. "That would (all) help to bring people (downtown)."

Assuming East Moline, is chosen — and it should know sometime this month — it could finish the whole Streetscape project by sometime in 2024-25 with things getting underway next year.

"Whatever we do here, has to be sustainable and inexpensive to take care of," Kammler said.

"The businesses that are here would see an influx and an inflow because of all of the spectacular improvements that would be made," he said.

"New businesses hopefully would fill some of these buildings. Adding new businesses, shops is all part of the redevelopment effort.

"Then there would be a way to connect the shops and the restaurants and things  here with events at The Bend, fireworks at The Quarter. It's that connectivity aspect."

The end result is people would see quite a difference in downtown East Moline.

"A massive difference," Kammler said. "I get goose bumps every time I think about the possibility of what this would do to transform this area."

It will improve the following areas in East Moline:

1. the Greater Downtown and streets in that area.

A Davenport couple found a stranger sleeping in their home

A couple who live on Hillcrest Avenue returned home to a surprise Sunday. They found a stranger sleeping in their house.

A good Monday to all. It's back to the daily grind. Today features mild, end-of-summer-like temperatures which is only fitting as fall officia…

Construction has begun on two new, 5-story buildings in downtown Davenport that will change the city's skyline, and plans are in the works for…

Bettendorf schools are so far doing well during the fall semester with the COVID-19 pandemic still ongoing, but are carrying out a planned rev…

There is no mystery here.

A Clinton man is in the Scott County jail on three charges related to a Thursday morning shooting in Park View.

'Major accomplishment' on new I-74 bridge

The driving surface for the new Iowa-bound span of the I-74 bridge is a wrap, but that doesn't mean the span is ready to open.

This is how part of 12th Avenue in East Moline would look after the streetscape project is completed near the Rust Belt.

This is how downtown East Moline along 15th Avenue would look after the streetscape project, narrowing the street but widening the pedestrian areas in front of the businesses. The city did not get the grant it hoped to receive to start the work.