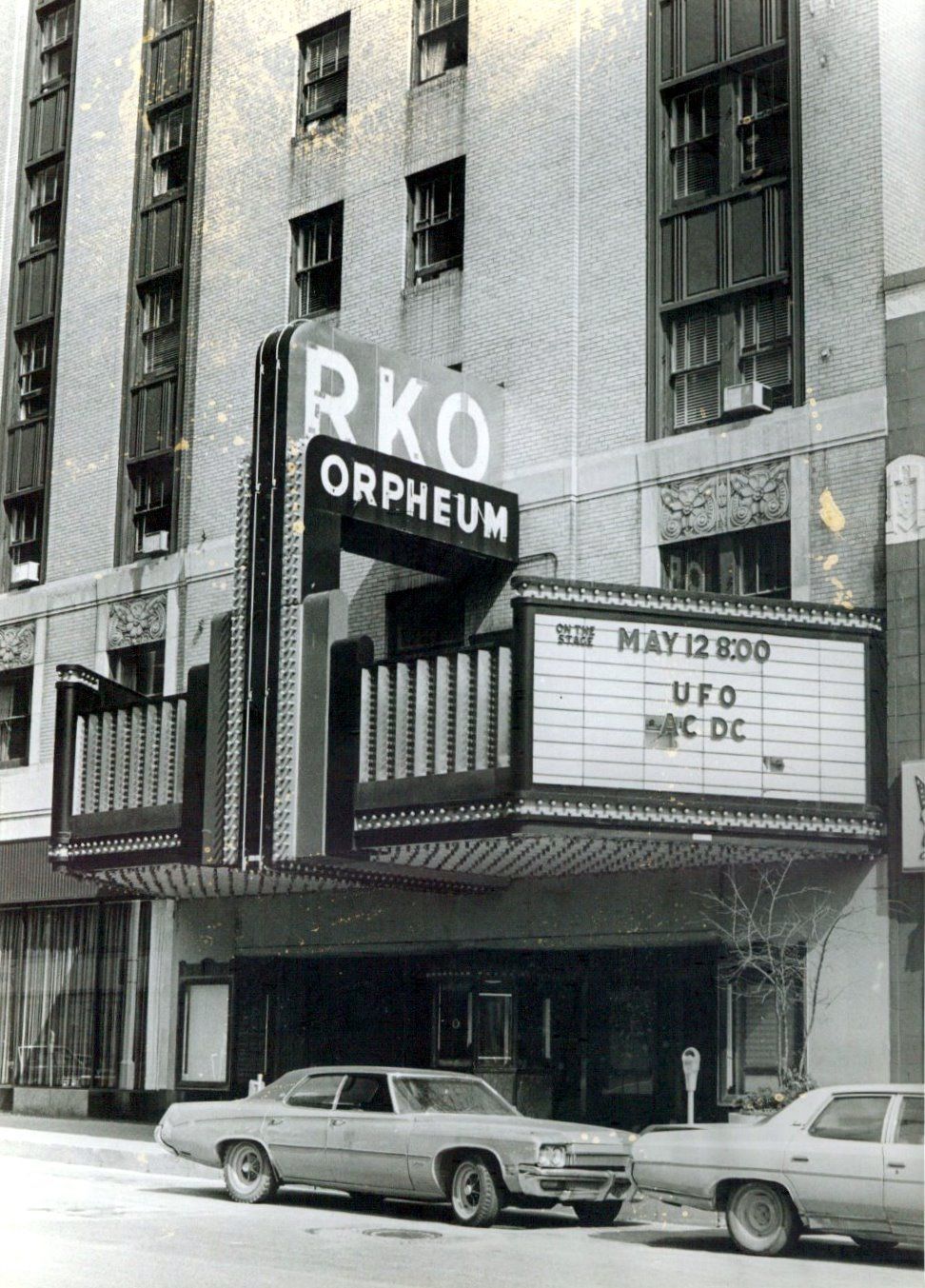 The marquee when the Adler Theatre was known as the RKO Orpheum. 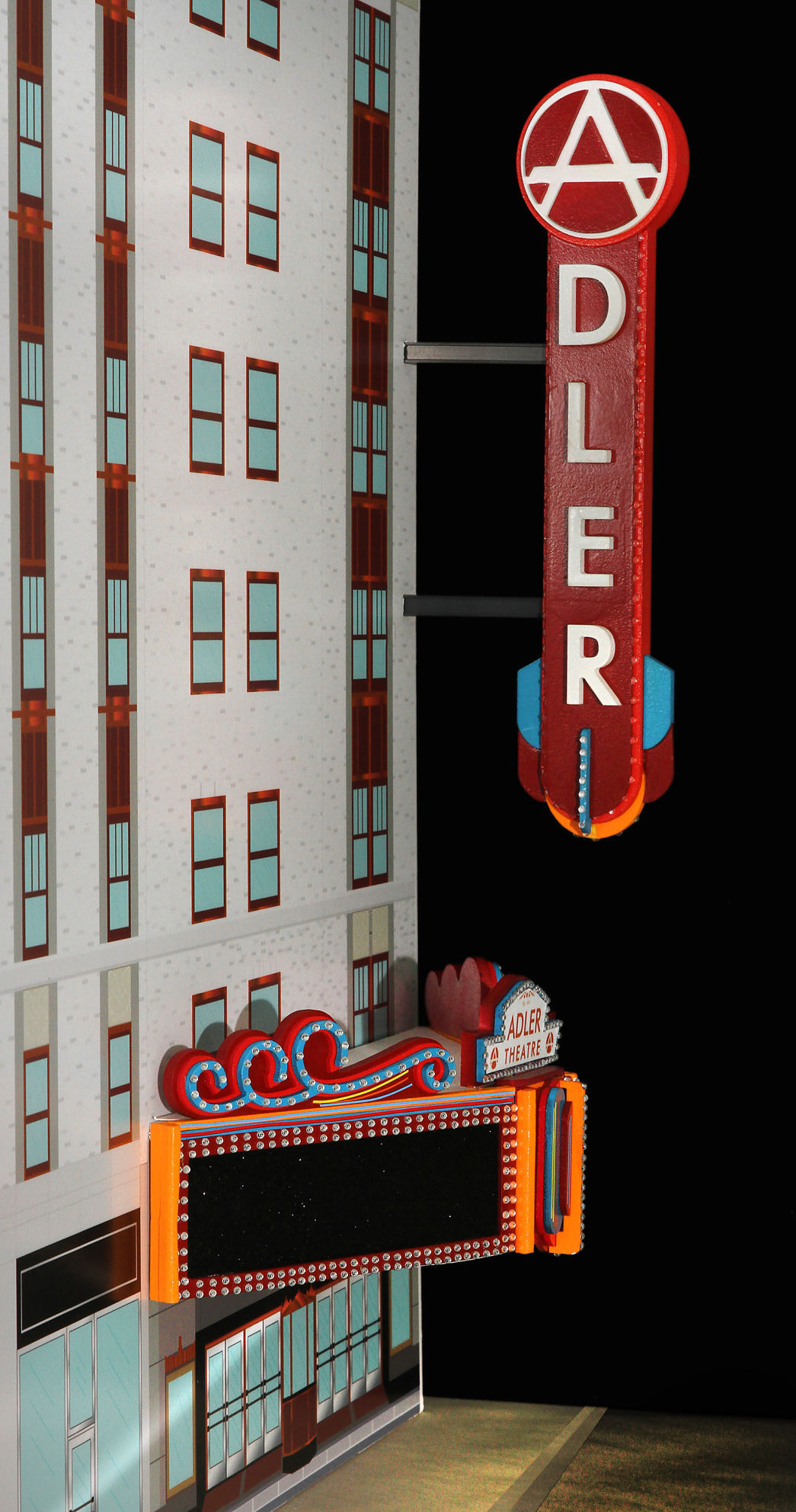 A new design for the Adler Theatre marquee in downtown Davenport.

Once, downtown Davenport’s 3rd Street was brilliant with the marquee lights of five movie theaters. None are left as movie houses. The old RKO Orpheum — now restored as the resplendent Adler Theatre — is about to bring back the gleam of a marquee like the Quad-Cities has never before blinked its eyes at.

The old marquee, dimmed and tired, came down 31 years ago when the theater was set for a total facelift and remodeling. Now, a spectacular marquee is to be built and lit within a year, perhaps sooner.

It is a $300,000 project, and Rick Palmer, executive director of the Adler, says, “One third of that has already been raised and we are just at the beginning of the fund program called ‘Light Up The Adler.’ We have received substantial gifts already from businesses and individuals. We are close to asking for bids. Work could start this fall.”

The marquee will have a broad overhang, lit by neon and LED bulbs, and a tall “blade” upright tower with the name “Adler” reaching five stories above the marquee.

The architect of the marquee, Eric Larsen, has been honored for his design of theater marquees. His State Theater marquee in Bay City, Michigan, was named best design of the year in 2009 by the International Sign Association.

The Adler has long deserved a marquee befitting the elegance inside. When the born-again Adler was gloriously reopened in 1986 with a concert starring songwriter Burt Bachrach, a flat marquee had been ill-located above the entrance to announce events. It could only be read by drivers only if they slowed down or parked in front of it. That was replaced by the present plywood stop-gap marquee, unsuitable for a classy place like the Adler.

I have seen a model of the proposed new marquee; it is cool, bespeaking its surroundings. The marquee has the enthusiastic approval of Davenport's Historic Preservation Commission, says Palmer.

"MY DESIGN for the Adler is an old-style marquee with a creative feel that invites people into the theater. I use a lot of colors in the lighting and the signing itself. It has all the upscale technology to boot,” says the architect, whose studio is in Midland, Michigan.

“I have been in the sign business since I hand-lettered the name on my first boat when I was 12. I started my Empire Sign Co. to design the projects I dreamed about. The Adler will be my 10th theater marquee. I have always wanted to do a marquee for an old RKO (Radio Keith Orpheum) theater. The Adler will be my first RKO.”

The marquee and its blade will be but one part of the $300,000 project. The present heavy theater doors that are capable of knocking over patrons will be replaced with lighterweight doors architecturally compatible with the theater. All the brass, so prominent in the theater will be restored. Adjoining the Adler will be a new upscale cocktail-lounge restaurant called RAW. It will serve only fresh foods and blended drinks from fresh fruits and vegetables.

The marquee when the Adler Theatre was known as the RKO Orpheum.

A new design for the Adler Theatre marquee in downtown Davenport.