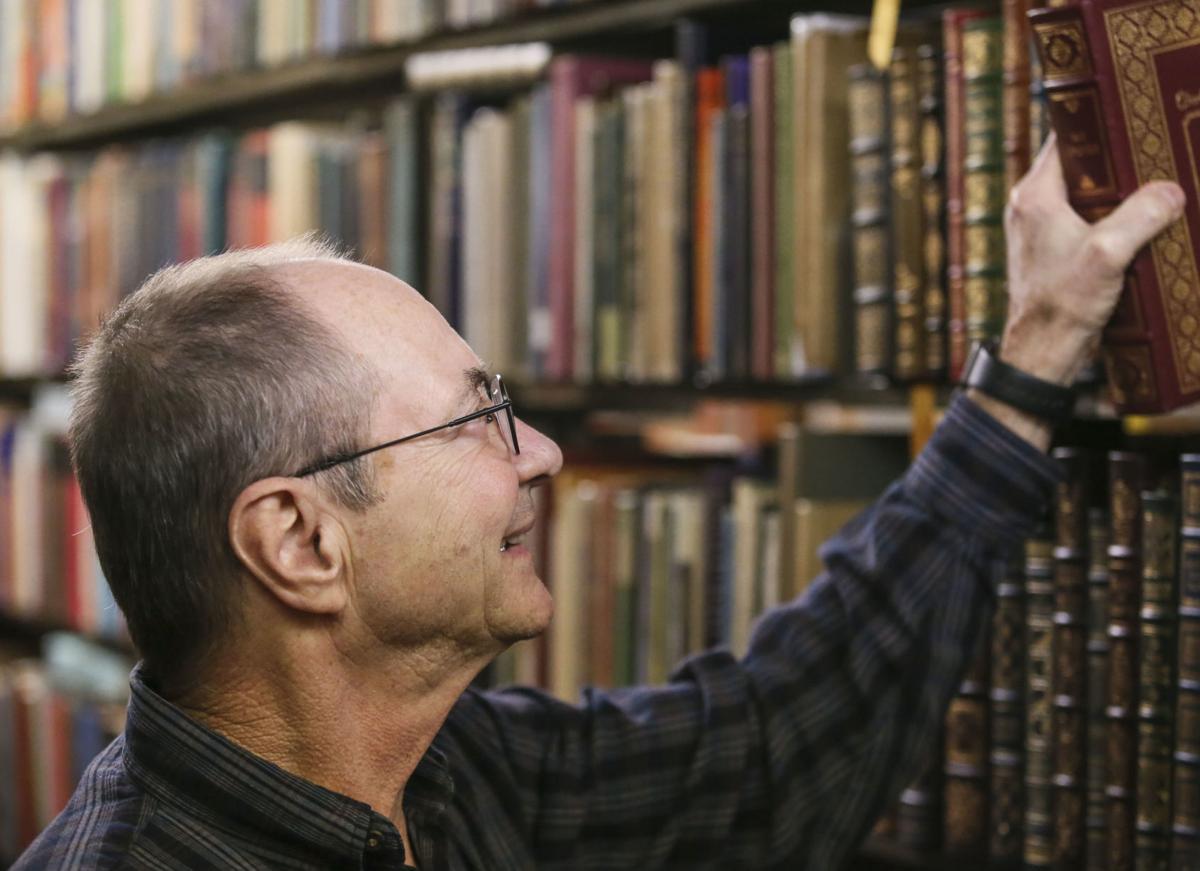 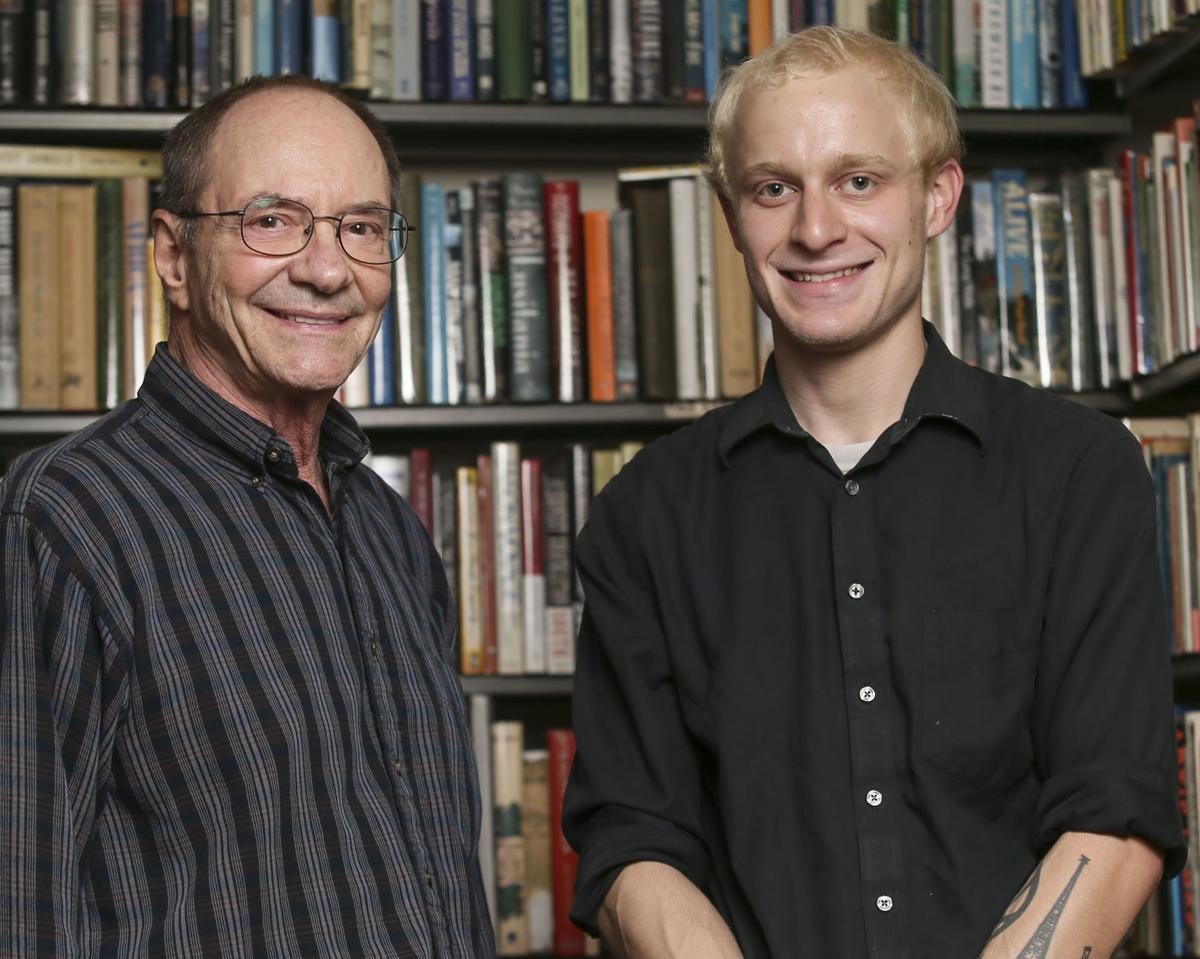 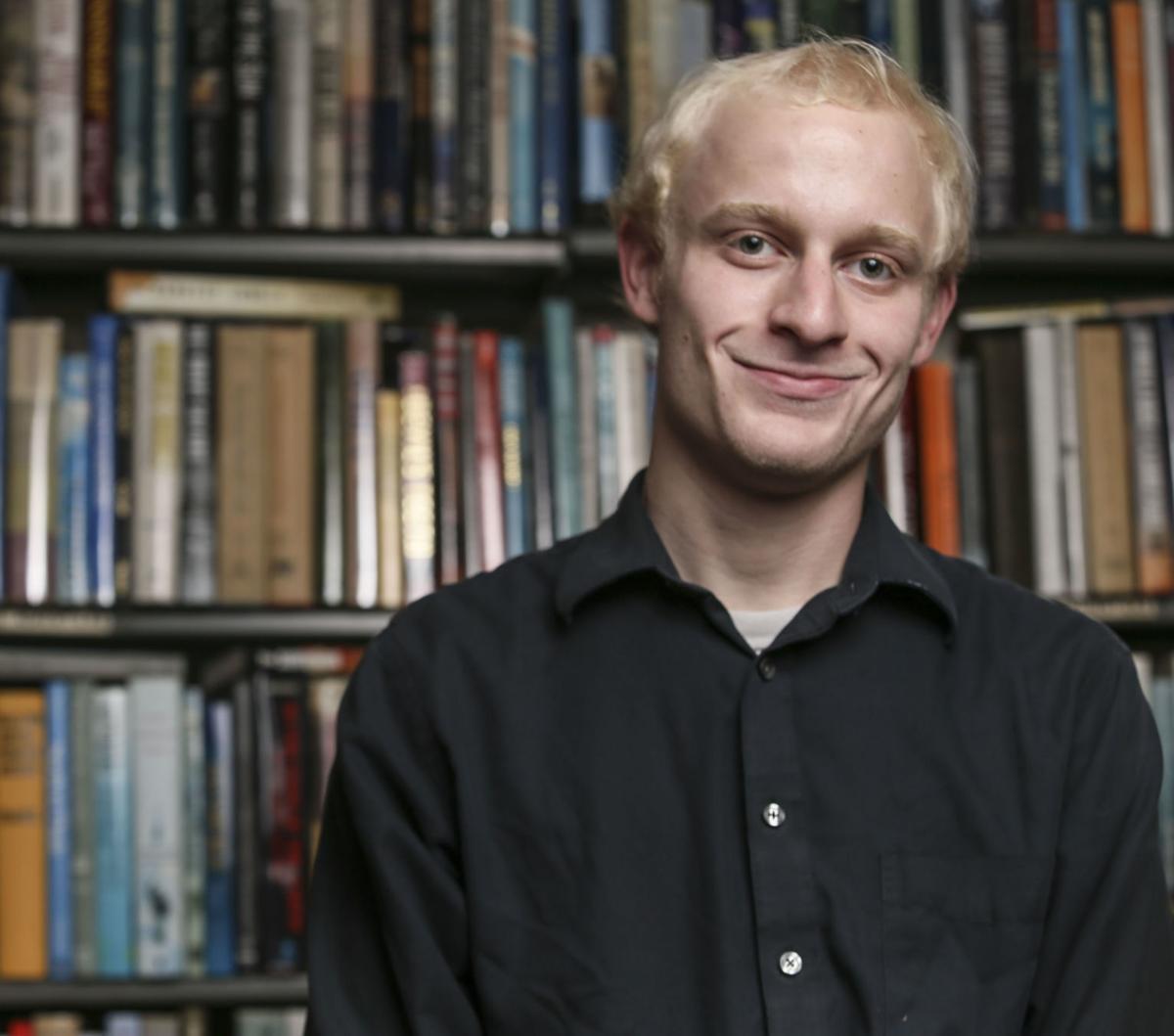 Carter Brown is the new owner of the Source Book Store in Davenport. 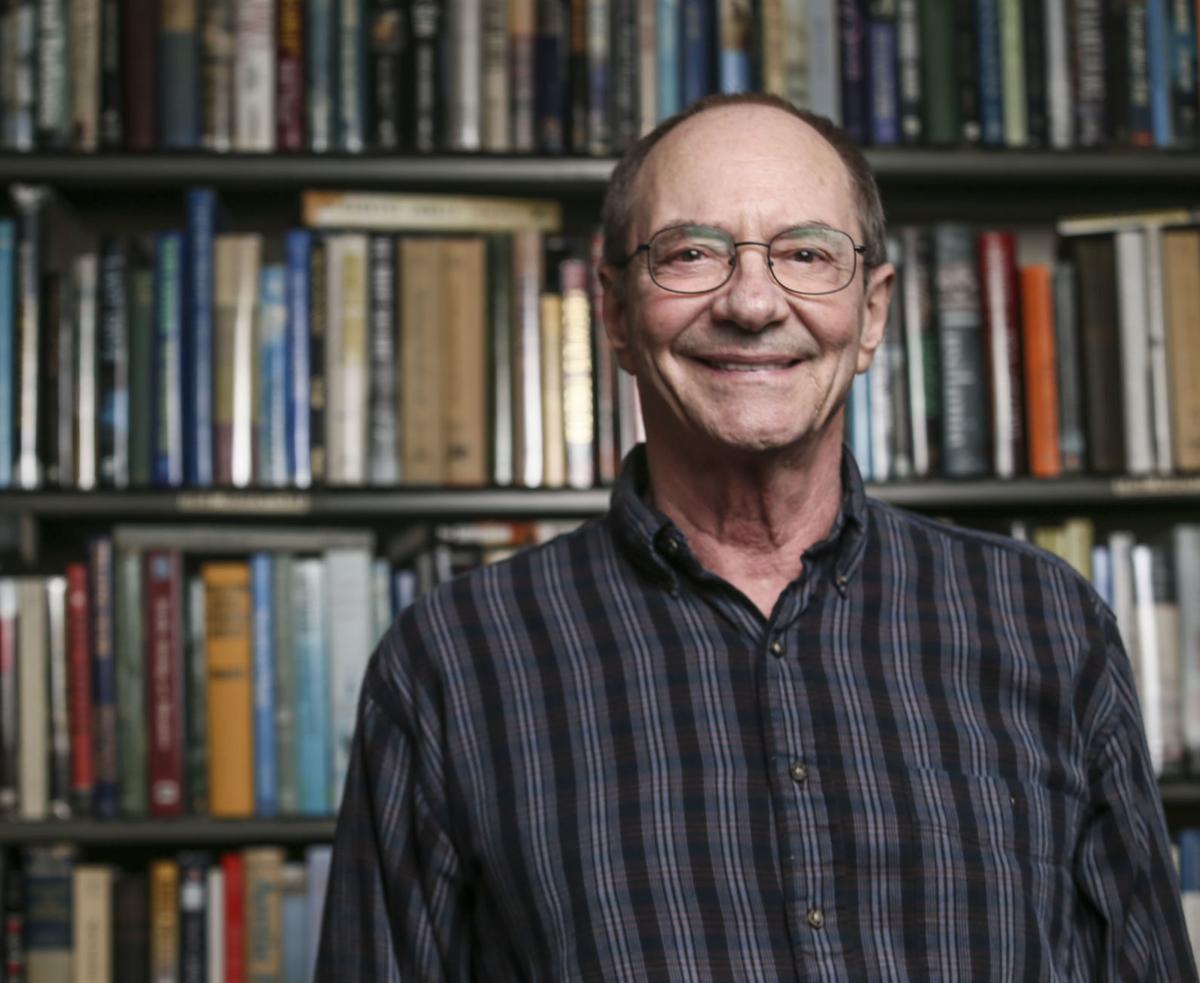 Dan Pekios is the former owner of the Source Book Store in Davenport. 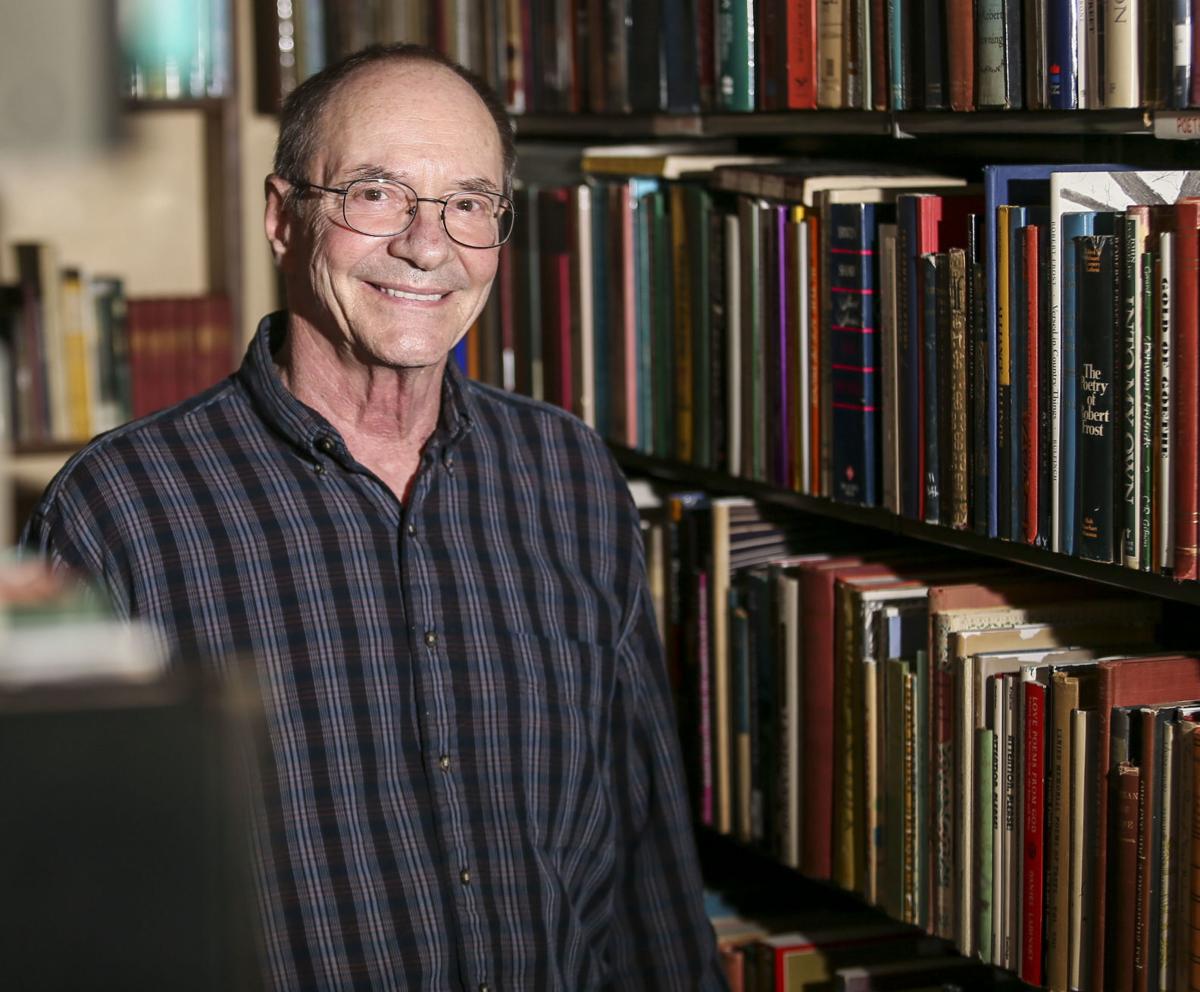 After 80 years in the Pekios family, the Source Book Store in downtown Davenport is changing hands.

Carter Brown, 23, who describes himself as a voracious reader — he’s read more than 50 books already this year — and a lover of books with a library of his own, will take over ownership of the store Thursday.

But there will not be a lot of changes to the store's look. Brown says he loves the character of the store the way it is.

Dan Pekios, who purchased the store from his father, Robert, in 1999, said the store was started by his grandfather, George Pekios, who immigrated to America when he was 10 years old. The Pekios family settled in East Moline, where there was a large Greek community.

“Granddad was 15 when he had to quit school and go to work in a foundry,” Dan Pekios said.

A self-educated man, his grandfather opened the store out of his house in East Moline when he was 30 in 1939. George and his wife turned the living room into the book store and they and the four kids lived in the back.

“He started buying books in his free time until he had enough in the living room that his wife started selling the books for him,” Pekios said. “He kept working for a while and he put almost 15 years in at the foundry.

George Pekios became an avid reader because he had to drop out of school and wanted to continue his education, Dan Pekios said.

After moving to Davenport, George Pekios found a place for the store, which was located where the parking lot of Kilkenny’s Pub is now.

In the 1950s, the store was moved to a three-story building where the Irish Memorial is now on West 2nd and Harrison streets.

Dan’s father, Robert Pekios, bought the store and ran it until he retired and Dan purchased it. The store was moved to its current location on West 3rd Street in 1978 or 1979, when the buildings along that stretch of West 2nd Street were torn down to make room for the Mass Transportation Center.

Dan, 69, recently realized that he was ready to move on to something else and that he had the perfect person to take over the store. That person was Brown.

Brown had been helping arrange books and perform other work at the store when it reopened after the COVID shutdown.

“I don’t know what overcame me, but he was in the science fiction section putting books away and I just walked up and said, ‘How’d you like to buy a book store?’” Pekios said.

Brown, whose uncles are retired Davenport Police Sgt. Andy Neyrinck and retired Scott County Sheriff’s Major Mike Brown, said he didn’t want to continue working for other people and that he had experience working in another local book store before Pekios got him inside the store.

“I’ve been coming here to look at books ever since I was able to drive myself down,” Brown said. “I’d come in, see Dan and buy up all his sci-fi.

“I had started working part-time at the Book Rack, and Dan had known I’d started working down there,” Brown said. “It was after COVID, after he reopened, and he said, ‘I could use some help down here if you’re interested.’ So I started coming down and I’d organize a section and put away some books.

When Pekios made the offer, Brown said, “It just kind of happened to where I could make it work and couldn’t let it slip through my fingers.”

College is not yet in the picture for Brown. He graduated early from Bettendorf High School at the top of his class. At age 18 he and his band cut a record, toured both coasts and made a music video in Arizona.

“I read nonfiction and I read science books, but I don’t like it when people tell me to read something,” Brown said. “I do it on my own and it sticks better. I’ve always been a good learner.

“I’ve done a lot of stuff since I got out of high school,” he said. “My friends went to college and spent four years drinking and racking up debt. I’ve read more books than they’ve read in their whole lives just this week. I spent four years working, my band went on tour and I bought a book store.”

Pekios said he recognized Brown as, “somebody who is really sharp, ambitious, straight and seemed like a really responsible guy. Because everybody I’ve told that I’ve sold it to a 23-year-old, you can imagine their first look and thought.

“I’m happy every day,” Pekios said of being the area's dealer in used and rare books. “The minute I wake up I’m ready to go.”

Brown said that he now felt that same way.

“He saw that I was ready to do something and that I was the right person for it,” Brown said of Pekios. “He saw I truly care about it.”

Pekios said that given Brown’s knowledge of social media, “he’ll be able to take the store to another level.”

Counting everything, there are about 100,000 items for sale in the store, Pekios said. “There are between 40,000 and 50,000 hard-cover books, along with about 50,000 movies, CDs, DVDs, vinyl records, vintage magazines, maps, cookbooks and paperback books. And it’s all handpicked.”

Brown said about the only change he was making was to the store hours. Come November, the store will likely be open during the afternoon hours Sunday, and there may be one day a week when the store will be open later so people getting off work can still shop for books.

"You're not going to walk into what looks like a Borders," Brown said. Except for some cosmetic things the store will be what the area's bibliophiles have known and loved for the past 80 years.

Man charged in Mother's Day killing is a multi-platinum songwriter

Davenport aldermen may make it more difficult to open a neighborhood bar.

'I would have died in my bed': Rock Island restaurant owner recalls COVID-19 experience

A Rock Island restaurant owner recalls his experience after testing positive for COVID-19.

The driver of a car that ended up in the frozen Mississippi River in Moline in February is being charged with aggravated driving under the influence of alcohol in connection with the death of his passenger.

Davenport man arrested for sexual abuse of children in 2014

A Davenport man was arrested for sexually abusing two children back in 2014.

Carter Brown is the new owner of the Source Book Store in Davenport.

Dan Pekios is the former owner of the Source Book Store in Davenport.