Cleveland's baseball team will change name from Indians to Guardians 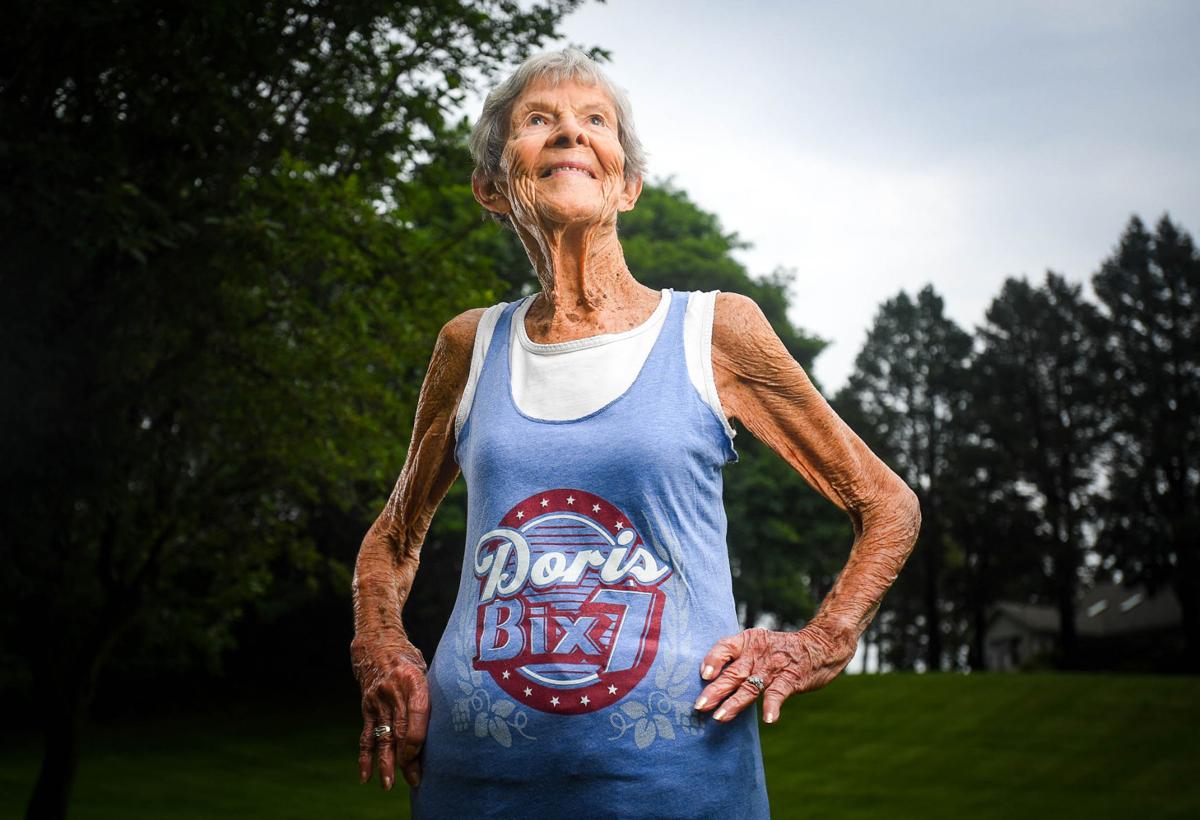 Doris Wiebler, 93, is the oldest entrant in the Quad-City Times Bix 7 race on Saturday. Wiebler has walked the seven-mile route consecutively for 41 years. On Saturday, she walked the shorter, two-mile Prairie Farms Quick Bix, making 2021 her 42nd year as a Bix participant. 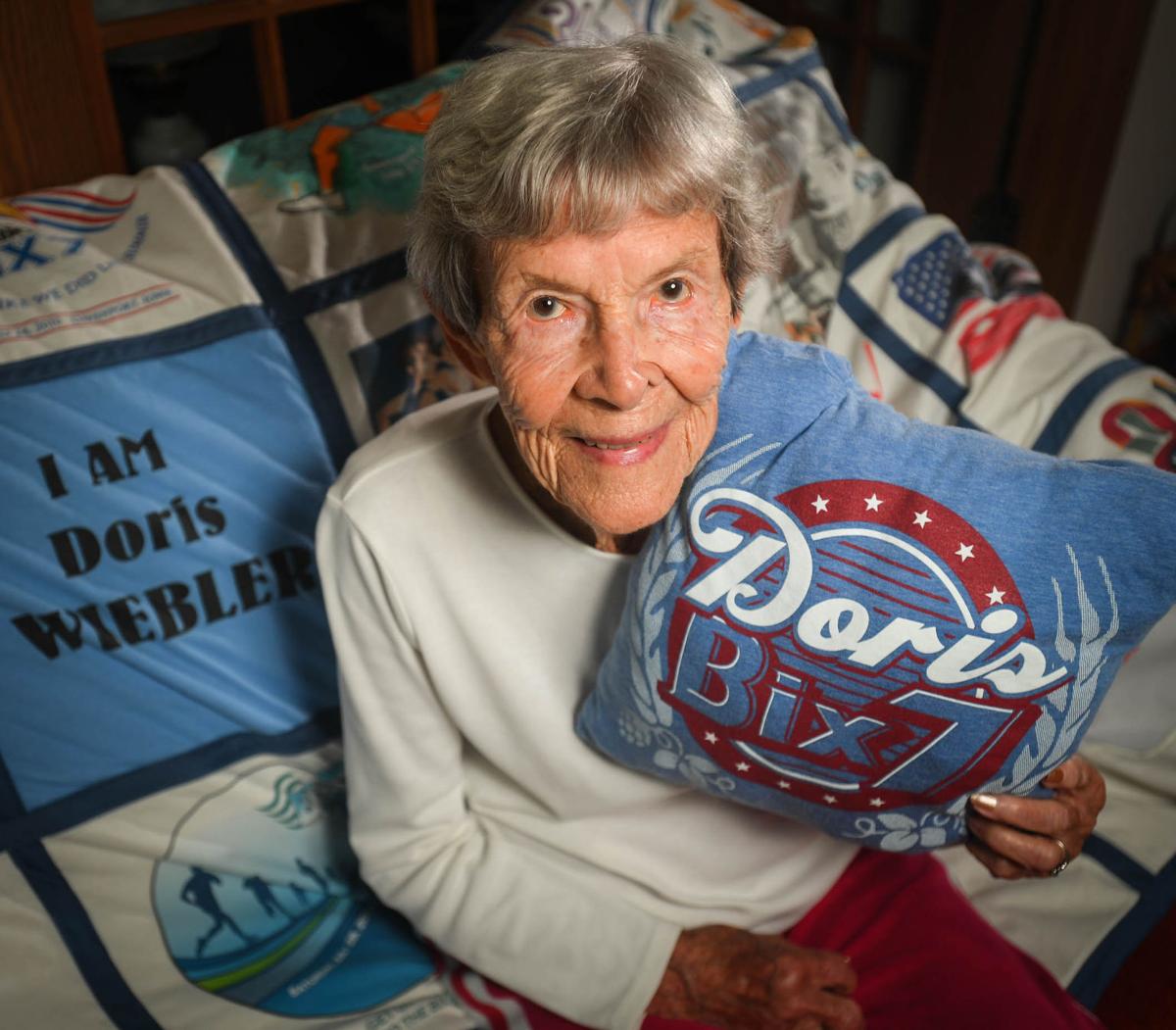 Doris Wiebler, 93, poses for a portrait with a quilt and pillows made from most of her Quad-City Times Bix 7 T-shirts at her home Thursday, July 15, 2021, in Davenport.

Age is just a number for Doris Wiebler, the oldest participant in this year's Quad-City Times Bix 7.

Wiebler, 93, has walked the seven-mile route consecutively for 41 years. This will be the first time she will walk the shortened Quick Bix, making 2021 her 42nd year as a Bix participant. She even took part in the virtual Bix last year, logging the miles on her own.

Wiebler said she was inspired to participate in the Bix after watching her own family taking part and having fun during the race back in the 1970s. Wiebler has eight children, ages 73 to 56; 22 grandchildren; and 37 great grandchildren, with another on the way. Two of her adult children have since passed away.

"I had older kids who were running the Bix and always looking forward to it," Wiebler said. "One year I said, 'guess what? I'm going to do the Bix this year.' And they looked at me and said, 'you're going to run?' I said, no, I'm going to walk. They said, 'this isn't a walk, mom, you're misunderstanding, this is a race.'

"I said, you do your thing and I'm going to do my thing," she said. "I did it, and coming down Brady Street hill, I looked around and there were people behind me, so I wasn't the last one to come in walking."

And from there, an annual tradition was born.

"From then on, I looked forward to it; it was so much fun. My kids were running it and they never talked about how much fun it was."

Wiebler broke her leg in December, so she will scale back this year by walking the two-mile Quick Bix instead of the entire route. She will be joined by two of her children, two daughters-in-law and several of her grandchildren and great-grandchildren.

Even more family will be cheering from the sidelines, all of them wearing green T-shirts that read, "Doris' crew" on the back.

"I am so blessed, so blessed with a great family and a healthy life. I'm very blessed," she said.

Wiebler attributes her longevity to good genes and an active, healthy lifestyle. Her brother lived to be 99, her sister lived to 98 and both parents lived to age 94.

"Partly I was blessed in liking food that was good for me," she said. "Normally, I walk a couple of miles every day. I've been going to the mall, maybe five days out of the week. It's something I enjoy doing."

Wiebler fondly remembers the time many years ago when her youngest son, Matt, was still in bed after family members had arrived to have breakfast the day before the Bix. She went into his room and began looking through his dresser drawers. When he asked her what she was looking for, Wiebler said she wanted his race bib.

When he asked her why, Wiebler told her son, "Because I'm going to wear it. Tomorrow's Quad-City Times is going to have your name with my time. He got out of bed before I could turn around. He wasn't about to have my time on his name. We've joked about it so many times."

Wiebler has put all of her Bix T-shirts to good use: laid across her bed is a large bedspread made out of 24 of the shirts. Other Bix shirts were crafted into throw pillows.

Wiebler has advice for those who think they can't do the Bix.

"At least start, you might surprise yourself," she said. "I wasn't sure if I wanted to do this or if I could do it, but I tried walking (the course) before my first Bix and I loved it. Then of course when the Bix came, it was so much fun to do it because of the music and the spectators.

"The spectators and music is always so much a part of doing the Bix."

Virus Inequity: The haves and the have nots

Virus Inequity: The haves and the have nots

Man injured when dragged by freight train in Davenport

A man was injured Friday when he was dragged by a freight train at Warren and 5th streets in Davenport.

Quad-City nursing homes fined nearly $80,000 for the choking death of a resident and the neglect of others

Three local nursing homes have been cited by the Illinois Department of Public Health and fined a total of $79,400 related to the abuse and ne…

Davenport police squad crashes into pole, ditch to avoid striking car that pulled out in front of it

Davenport police confirmed Tuesday they responded to a burglary call early Monday morning where a vehicle was stolen.

Doris Wiebler, 93, is the oldest entrant in the Quad-City Times Bix 7 race on Saturday. Wiebler has walked the seven-mile route consecutively for 41 years. On Saturday, she walked the shorter, two-mile Prairie Farms Quick Bix, making 2021 her 42nd year as a Bix participant.

Doris Wiebler, 93, poses for a portrait with a quilt and pillows made from most of her Quad-City Times Bix 7 T-shirts at her home Thursday, July 15, 2021, in Davenport.