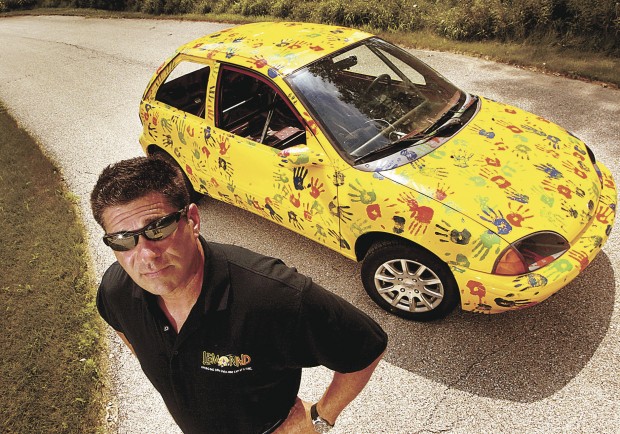 Mark Pauly shows off a 1996 Geo Metro in Davenport, Iowa Monday July 26, 2010 that will compete in a 24-hour race to raise money for at-risk kids. (Jeff Cook/QUAD-CITY TIMES) 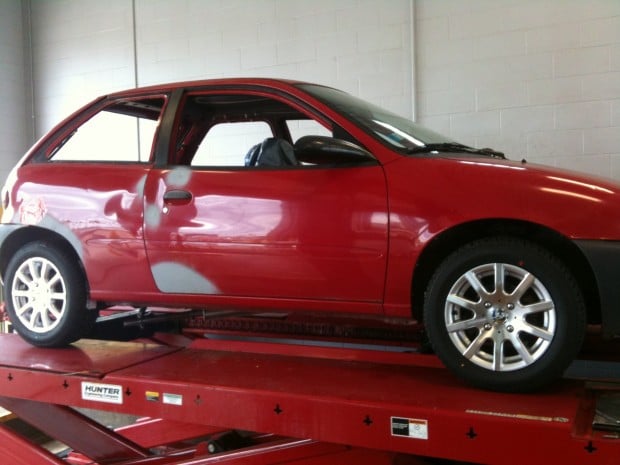 The original rusted-out Geo Metro, before Team LemonAid got their hands on it. 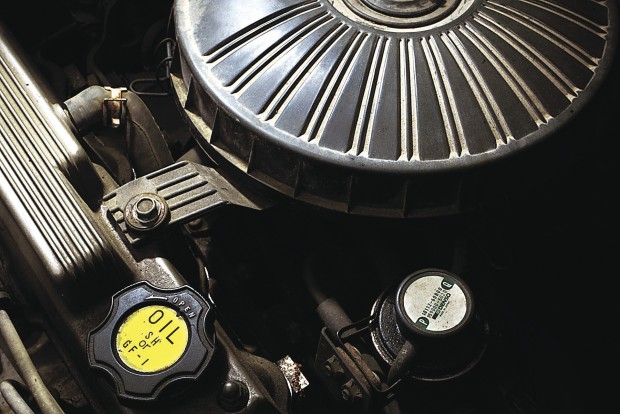 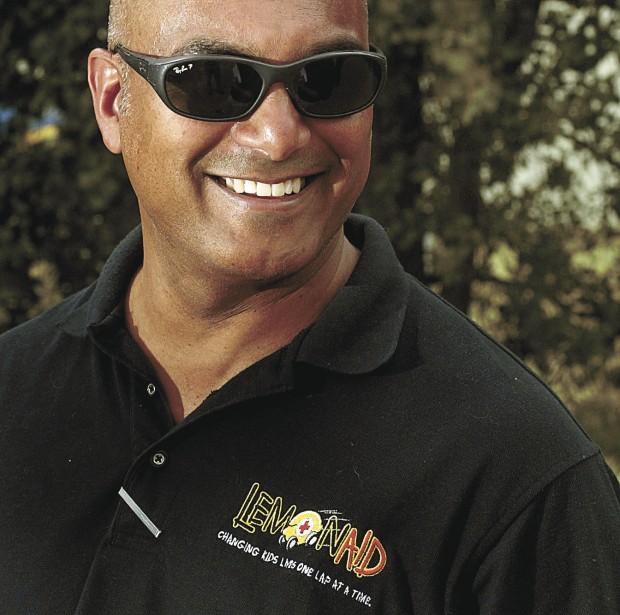 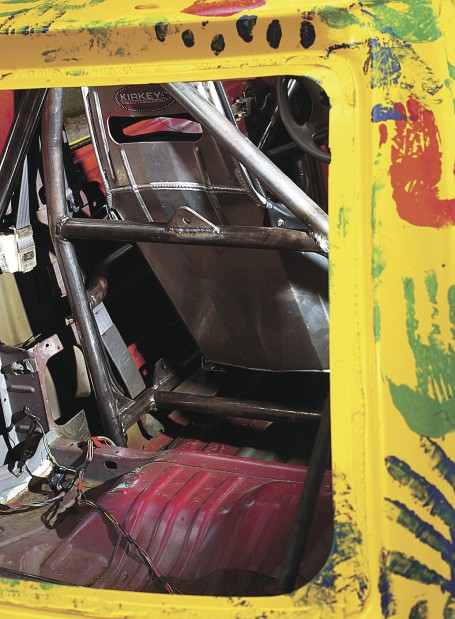 The interior was replaces with a roll cage in a $500 1996 Geo Metro photographed in Davenport, Iowa Monday July 26, 2010 that will compete in a 24-hour race to raise money for at-risk kids. (Jeff Cook/QUAD-CITY TIMES) 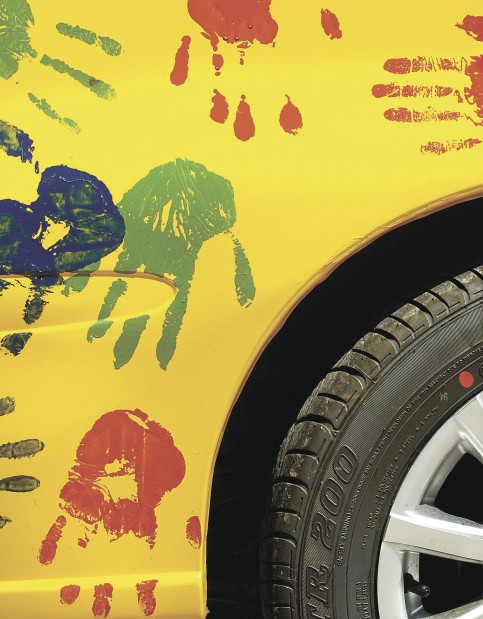 In an old barn in rural Johnson County, Iowa, a faded red Geo Metro sat rusting away — unloved and no longer driven.

The 55-horsepower subcompact was a workhorse, driven by several University of Iowa students. The last squeezed the final drop of oil from its wheezy engine.

Meanwhile, 50 miles to the east, a hodgepodge team of auto enthusiasts grew increasingly worried that a high-horsepower-but-high-mileage Nissan Maxima they’d picked up for a new endurance road race might be a bad choice.

Engine failure was not an option, what with 65 kids counting on the team to keep a beater car running, pretty much continuously, for two straight days under hot August skies.

The team is LemonAid racing, the cause is an Iowa camp for at-risk and disadvantaged kids and the contest is The Mutually Assured Destruction of Omaha race, scheduled for Aug. 28-29.

Ajay Singh, one of the drivers for LemonAid racing, said one of his fellow car-crazy friends read about a “24 Hours of LeMons” race in California, where contestants can spend no more than $500 on their automotive entry and must have a theme to compete. What started as one race in California blossomed into 21, one of the closest being at the Mid-America Motorplex in Pacific Junction, Iowa, where the “Destruction of Omaha” race will be held.

“He thought it might be something our group might be interested in doing, and we decided to have some fun with it,” Singh said. “But it became a bit more complicated than ‘let’s just take a car onto the track and do it.’”

Mark Pauly, another team LemonAid driver who is donating his truck and trailer to the cause, was a little less politically correct.

“It’s been a blast, but it’s snowballed into kind of a monster,” he said.

Someone thought a theme of “when life hands you lemons, make lemonade” would be clever. That morphed into a decision to make the race a fundraiser for a good cause.

And that’s when the group decided to help out old friend and Heart of America Restaurant & Inns president Mike Whalen, who founded Wildwood Hills Ranch in 2001. The ranch, in Madison County, Iowa, just south of Des Moines, helps at-risk youth between the ages of 8 and 18.

Sponsors provided safety equipment and logistics for the team, and contributors pledged dollars-for-laps-completed, every penny of which will go to Wildwood, Singh said.

That raised the stakes for the group of physicians-and-executives-turned-gearheads, who originally just wanted to test their mettle against other lemon drivers from across the Midwest.

After the team ditched the Maxima for something they’d hope would have better endurance, one of the team members said he knew a Geo Metro enthusiast north of Iowa City.

In racing circles, the Geo Metro is, frankly, a bit of a joke. Underpowered, little torque, snail-like acceleration and a top speed barely pushing 80 mph adds up to, well, underwhelming.

But the motors run forever and the cars are extremely light and get insane gas mileage. In other words, they are perfect for a race where staying alive is more important than setting speed records. The small size will allow tires, brake pads and fuel to last longer than they would in a bigger car, Singh said.

“It’s the turtle and the hare thing, maybe mixed in with a little bit of the little engine that could,” he said.

The team drove up to Iowa City with a truck and trailer and found the forlorn Metro in the barn.

“It hadn’t run in like two years, but we hooked a battery up to it and it fired right up,” Singh said. “We knew this thing had a good little heat to it. It became kind of symbolic of the cause.”

That was last winter. In the intervening months, the Metro has been transformed, led by the work of chief mechanic Ryan Mau.

Mau, who works at Duck Creek Tire, is the go-to guy for most of the members of Team LemonAid, the majority of whom drive high-end sports cars and other speed masters.

“I’m used to working on stuff like that, and now I’m trying to make a Geo Metro act like one,” he said. “It’s been interesting. Everything has been a challenge.”

To make the car as light as possible, only a racing seat for the driver, the stick shift, the steering wheel and a reduced instrument array comprise the interior. A new battery was put in and the air conditioning unit removed, but other than that, the engine is pretty much exactly the way it was found in the barn, per the “24 Hours of Lemons” race rules.

A sunny yellow paint job made the Metro a literal lemon. But the coup de grace — and something the drivers hope wins them points with the judges at the race — was getting five dozen kids from the Wildwood Hills Ranch to dip their hands in brightly colored paint and affix their hand prints all over the car body.

The team is wrapping up the mechanical and body work on the Metro, sights set firmly on competing well during the big race. Since it is the first time any of them have participated in a

24-hour event — especially one with bizarre mini-events like the Personal-Injury-Lawyer Anti-Slalom, the Marxist-Valet Parking Challenge, and the Wide Open Throttle Rodthrowapalooza — there is some anxiety.

“This is really wheel-to-wheel racing, and a little less controlled than what we’re used to,” said Singh. “With 50 other junkers on the track, you just don’t know what’s going to happen.”

Pauly, who is normally behind the wheel of a 500-plus horsepower BMW M3, said there are still kicks to be found in the Metro’s one-liter, five-speed engine.

“The power is very underwhelming, but it’s still a blast to drive,” he said. “It has so much roll compared to finely tuned sports cars.”

Due to a pending shoulder surgery, Pauly will be relegated to support staff. But he wouldn’t miss the race even if he were in a full-body cast, he said.

“It started up with a bunch of guys wanting to buy a $500 piece of junk to race,” he said. “But it’s turned into a labor of love, really.”

The race is billed as “endurance racing for $550 cars” and “where Pintos and Maseratis battle to lap a Le Car.” Half-way through, the car vote…

Wildwood Hills Ranch is a 400-acre camp and retreat center in Madison County, Iowa, just south of Des Moines. It was founded in 2001 to help a…

It started out as a quirky, very local and extremely informal spoof of the internationally famous 24 Hours of Le Mans endurance race.

Mark Pauly shows off a 1996 Geo Metro in Davenport, Iowa Monday July 26, 2010 that will compete in a 24-hour race to raise money for at-risk kids. (Jeff Cook/QUAD-CITY TIMES)

The original rusted-out Geo Metro, before Team LemonAid got their hands on it.

The interior was replaces with a roll cage in a $500 1996 Geo Metro photographed in Davenport, Iowa Monday July 26, 2010 that will compete in a 24-hour race to raise money for at-risk kids. (Jeff Cook/QUAD-CITY TIMES)