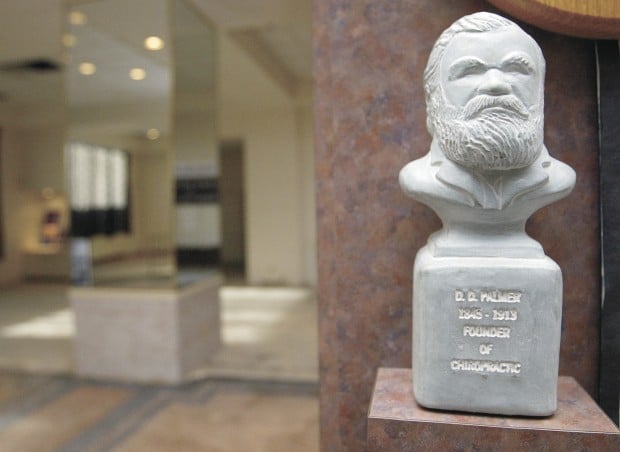 A bust of Dr. David D. Palmer sits on a pedestal on the first floor of the new chiropractic history museum. He is the son of the founder of chiropractic. (John Schultz / Quad-City Times) 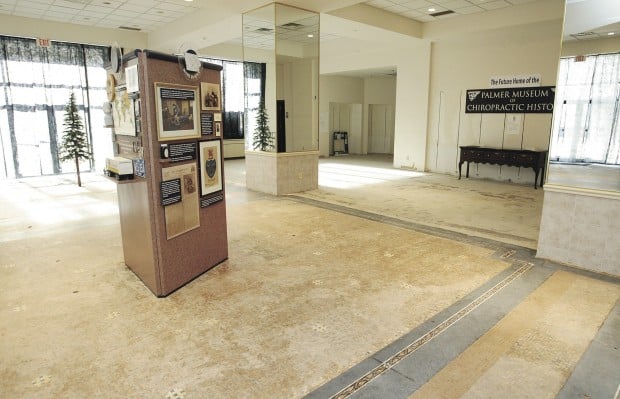 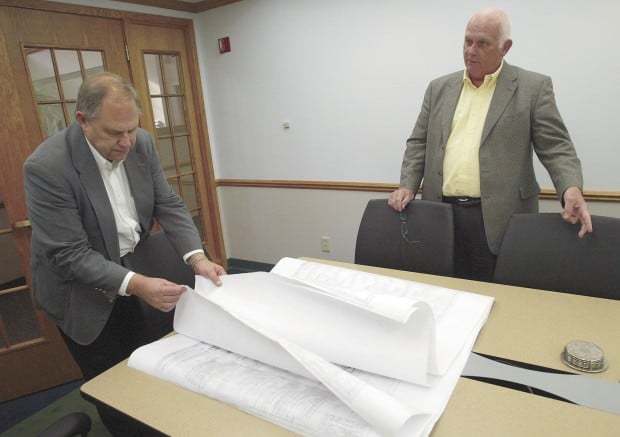 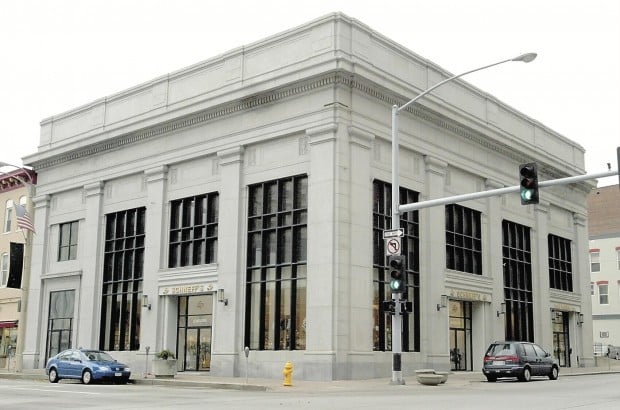 Another building at a major downtown Davenport intersection is getting a face-lift and soon will come back to life.

Palmer College of Chiropractic is getting closer to a public opening of a first-floor museum inside the former Scott County Savings Bank — more recently Schneff’s Jewelers building —  at 3rd and Brady streets.

The college quietly moved a large chunk of its administrative staff into the building’s third floor in the summer of 2008, but the ground floor remained dark, its large windows cloaked by black curtains.

The building was bought by the Vickie Ann Palmer Foundation in 2004, shortly after the closing of Schneff’s. Plans and fundraising for the museum have moved forward slowly but steadily since, said Bob Lee, vice chancellor for support services.

“We want it to be a cultural attraction and provide a little history,” he said. “We also want to make sure the building is being put to good use.”

The museum will highlight the birth and history of chiropractic in Davenport, as well as history of the banking industry downtown. Mockup displays already are in place, and workers recently tore out the jewelry store carpeting, revealing the original mosaic tile floor beneath.

Palmer consulted with the Davenport Historical Society and is trying to be historically sensitive while also getting productive use out of the nearly century-old building.

“It would be on the top 10 list” of most important downtown buildings, said Fritz Miller, a member of the historic preservation commission. “Obviously, it’s on a very prominent corner. Because of that alone, it’s an important structure.”

As renovation work continues on the Blackhawk Hotel and other formerly vacant central-city landmarks, Miller is getting optimistic.

“I think downtown is starting, glacially, to move in a better direction,” he said. “The four-block area around 4th and Brady is critical, absolutely critical. With the new St. Anthony’s Parish Hall and Forrest Block work, I think we’ve got some good things going on.”

Lee said the museum project was awarded a Riverboat Development Authority grant, which helped boost the fundraising effort. College representatives hope work will be far enough along to host receptions and other events in the first floor when Palmer holds its annual mid-August homecoming.

Darren Garrett, executive director for marketing and public relations for Palmer, said the college wants to be part of the fabric of both the Hilltop and downtown areas. The work on the Schneff’s building helps demonstrate that, he said.

“There’s marquee value alone in its location,” he said. “It’s a cornerstone of downtown.”

Built of gray granite and limestone in 1918, the three-story Scott County Savings Bank building at 3rd and Brady streets was hailed by a prede…

A bust of Dr. David D. Palmer sits on a pedestal on the first floor of the new chiropractic history museum. He is the son of the founder of chiropractic. (John Schultz / Quad-City Times)