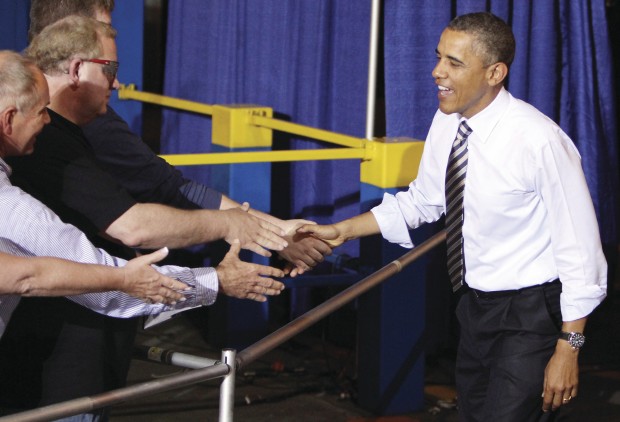 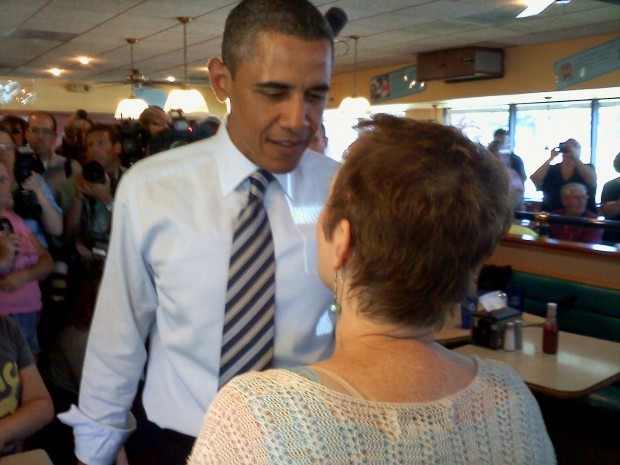 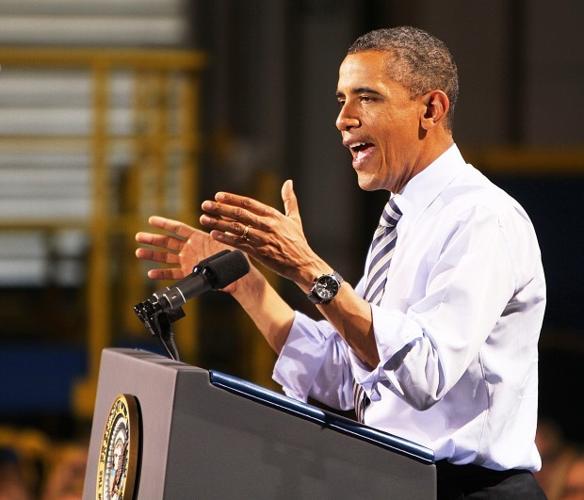 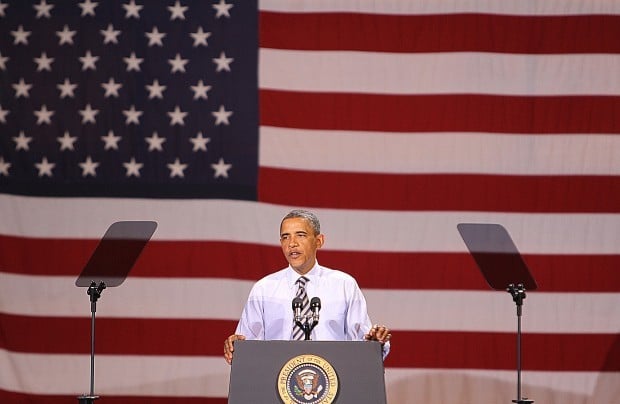 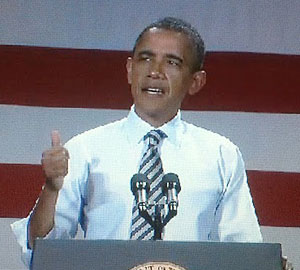 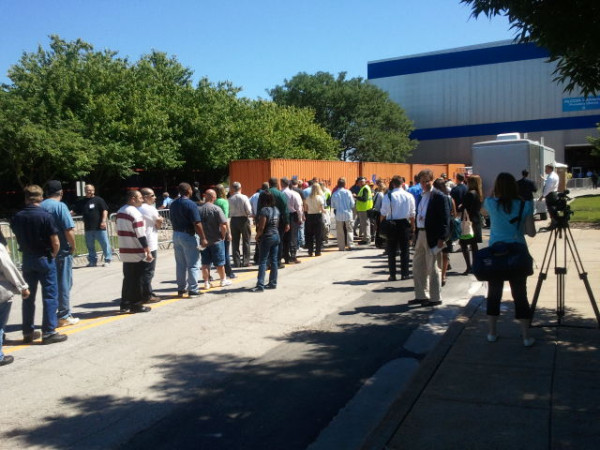 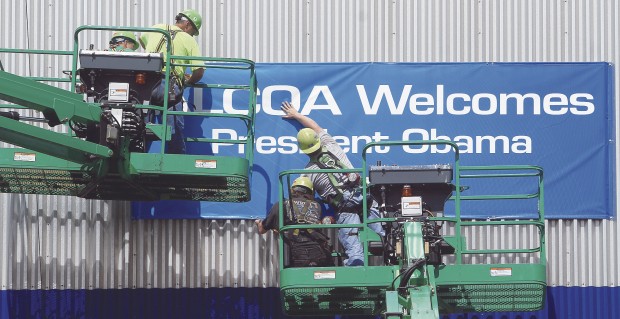 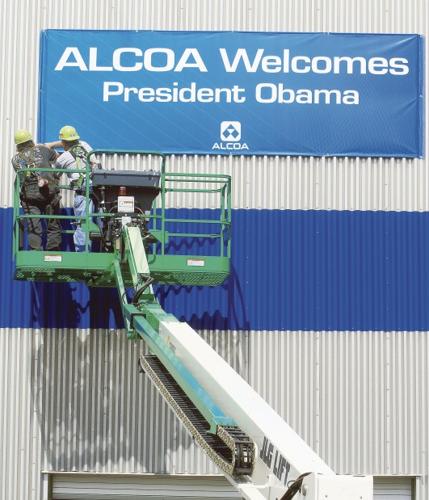 With the hum and clang of industry as a backdrop, President Barack Obama gave an economic pep talk in the Quad-Cities on Tuesday, offering a rebuttal to what Iowans are hearing from Republican presidential prospects lampooning his economic policies as they crisscross the state.

The president acknowledged a sluggish economy but used Alcoa Davenport Works - where employment has returned to prerecession levels and is adding more jobs - as a stage to argue Americans know that change and reinvention is a fact of life.

Using his nickname for the area, Obama urged people not to fall victim to cynicism, even though it may be tempting to think the country's best days are behind it.

The speech came after a brief tour of the Riverdale plant and an impromptu stop at Ross's 24-Hour Restaurant in Bettendorf, where the president greeted diners and ordered a half dozen dishes for his entourage. The stop came after a 2008 campaign promise to owner Cynthia Freidhof that he would sample the signature dish, a Magic Mountain.

The president's visit was a mere three hours, but Quad-Citians lined the motorcade route, and 350 people waited inside Alcoa while Obama took a tour of the factory floor with company and union officials.

The aim of the visit was to highlight manufacturing's role in the economy and the president's approach to bolstering it.

The realities of the economy sometimes sting, the president said. Improved technology makes business more efficient, but also it requires fewer workers in some cases. And a high school diploma often isn't enough to get a good job.

The president has laid out an agenda for the manufacturing sector over the past few weeks, which he summed up in the Quad-Cities.

He told about increasing training for industry-certified manufacturing jobs at the community-college level and a recent announcement of a partnership between the nation's top engineering schools, businesses and the federal government to get products from the drawing board to the factory floor to the marketplace.

Initiatives such as those, along with innovation and entrepreneurship, will bring manufacturing jobs to the United States, Obama said.

"No matter what you may hear, there's no silver bullet to reverse a decade of economic challenges," he said. "We've had problems for 10 years now.

"It's not going to reverse overnight, but these steps will help us move forward. They'll help us grow our economy today, and they'll guarantee a better future for our children."

Republicans were eager to contrast their own philosophy with the president's. Party leaders blamed him for the country's economic woes and predicted it would be his demise.

"This election will come down to the president's clear failure on the economy, and he will lose because of that," Reince Priebus, chairman of the Republican National Committee, told reporters on a conference call early Tuesday.

U.S. Rep. Bobby Schilling, R-Ill., who attended the speech, said the economy will continue on its present path until the administration commits to tax and regulatory cuts.

Obama offered his own rejoinder to the GOP, saying the economy has gained 2.5 million jobs in the past 15 months. He also indicated he's more than willing to engage critics in Iowa and made a prediction of sorts of his own.

Obama said he would likely be back a "few more" times before February, the month of the 2012 caucuses. And he added, "Iowa, you and I, we go a long way back. And those of you who are coming over from the Illinois side, we go even longer back. So, we've got some history together. And together we're going to make some more history for years to come."

The president also sounded a bipartisan theme, saying Americans need to work together to overcome the economic challenges they face. He compared it to a business such as Alcoa working together from top to bottom to improve its product.

"Well, none of us individually are perfect, but as a team, America can perfect ourselves," he said. "Instead of having the kind of squabbling we see in Washington all the time, everybody has got to start thinking together the way engineers and workers and the business side of Alcoa thinks together.

"Problem-solving all the time, that's what's made you successful. That's what will make America successful - by adapting and innovating, but also thinking like a team, instead of turning on each other."

Rory Washburn, director of the Tri-City Building and Construction Trades Council, liked the speech and its message, especially about teamwork.

"Hopefully, our national politicians can hear that message," Washburn said, "lay down their arms and work for American jobs."

"I've long called for a national manufacturing strategy, so I'm very pleased that the president is turning his focus to the manufacturing crisis in this country," he said. "Our economy, our national security and our nation's future depend on a strong manufacturing sector that provides good-paying jobs to middle class Americans."

"This is about making things in American again," he said.

After his remarks, the president also met with about 20 people, according to participants, including Davenport Mayor Bill Gluba.

There, he thanked people for their support and reiterated his economic message, the mayor said.

Ross’ Restaurant in Bettendorf, a popular spot for visiting politicians, drew a visit by a Dutch television crew for a Magic Mountain and some…

Photos: President Obama in the Quad-Cities

Text of Obama's speech at Alcoa

Jeff Grindle knows what a big day this is, after all, the leader of the free world is visiting his town and his employer.

It was a long shot, but 37-year-old Amy Kramer decided she would give it a try.

Moline woman gets to greet the president

A date with the president.

What are the top three things President Obama can do to encourage manufacturing growth?

Times readers welcome President Obama to the Q-C today. Here's what they want him to know.

When the doors of President Barack Obama's vehicle opened Tuesday at Alcoa Davenport Works, Vickie Moore and other greeters noticed something …

Ross', that Bettendorf eatery at the end of the Interstate 74 bridge, is never going to be the same.

It was the lunch hour, so naturally President Barack Obama stopped off at Ross' 24-Hour Restaurant. After all, he was in the neighborhood.

The lone protester walked up and down State Street near the entrance to Alcoa Davenport Works on Tuesday, telling anyone who would listen abou…

Waiting in the VIP section near the stage where President Barack Obama would speak, Tara Barney spoke excitedly about the president's visit an…

A security guard motioned toward a bank of portable toilet units, just outside Alcoa Davenport Works.

President Barack Obama's speech not only drew journalists from national media outlets such as CNN and the New York Times, but also 11-year-old…

Struckman at the wheel — again

It was a long shot, but 37-year-old Amy Kramer decided she would give it a try.

Kris Derscha of Davenport, a metallurgist at Alcoa Davenport Works, volunteered to help during President Barack Obama's visit. She was passing…

Alfred Ramirez, president of the Greater Quad-Cities Hispanic Chamber of Commerce, said President Barack Obama's visit to the Quad-Cities is "…

President Barack Obama in the Quad-Cities

Area residents try to get a glimps of President Barack Obama Tuesday June 28, 2011 in the Quad-Cities.