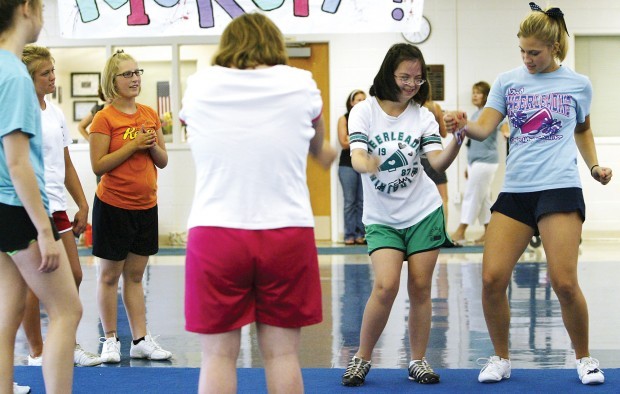 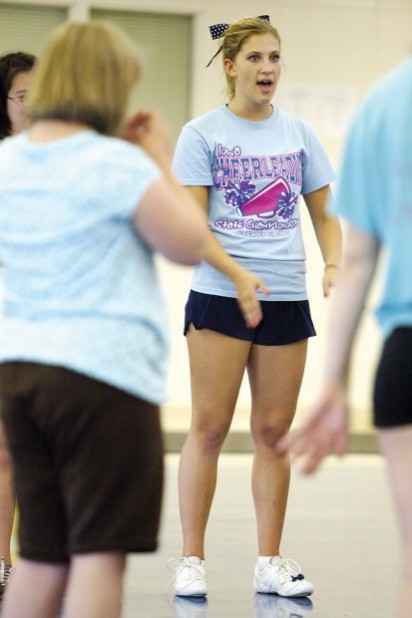 Dwyer - a popular morning radio funnyman on 97X WXLP-FM - gets serious when he talks about how Cronk and other Pleasant Valley cheerleaders helped his 12-year-old daughter, Katie, who has a disability.

Despite her limitations, Katie and nine other special needs girls, ages 8 to 14, root for the Spartans alongside Cronk and other cheerleaders. The Spartan cheerleaders volunteer countless hours coaching the girls, who are known as the Sparkles.

Cronk, 16, and fellow Spartan cheerleader Sarah Herr, who came up with the idea for the Sparkles, founded an organization called the Sparkle Effect, which aims to develop other cheering squads for special needs girls at schools nationwide.

As a result of their work, Cronk has been bestowed one honor after another, most recently being one of five students in the country named to the inaugural All-America High School Service Team by The League, a national youth service organization that empowers young people to give back to their communities. In June, Cronk traveled to New York City, where she was presented with an award from U.S. Secretary of Education Arne Duncan.

In her role on the service team, Cronk will serve as a national spokesperson for teen volunteerism. Her message, she says, is simple: It's cool to care.

"Teens need to realize they have a voice, they have power, and they can make things happen," she said. "There are lots of different organizations out there. Maybe their family has been touched by cancer, or they're passionate about the environment. There's something out there for everyone."

Cronk's passions are two-fold - cheerleading and working with children with disabilities. Sarah has an older brother who has a form of autism, and she saw how much his life was enriched by joining the swim team.

Cronk, in her second year of working with the Sparkles, said she has received tremendous gratification from her efforts.

"You meet them and get to know them, and now it's like, I love them all like they're my sisters," she said.

The Sparkles love Cronk and the other Spartan cheerleaders, too. Deb Demarest of Bettendorf said her 12-year-old daughter, Hannah, has a lot more confidence than she used to.

"It gives her a chance to be like the popular kids, like the 'in' crowd, or the star of the show," Demarest said. "She was always passionate about cheerleading, but she didn't have an outlet."

Hannah, who has a heart defect, had to spend time in the hospital in May, Demarest said. She said the Spartan cheerleaders came to visit her daughter.

That's not unusual. Beth Atkins of Davenport said the Spartan cheerleaders participated in the Heart Walk to support her 12-year-old daughter, Alison, who is a Sparkle, and Cronk stopped by earlier this week to visit with her.

"They're all awesome," Atkins said of the Sparkles coaches. "They didn't expect to get so close to the girls, but they touched their hearts. (The Sparkles) sometimes call the coaches on the phone just to talk."

At Wednesday's practice, the Sparkles - who have been featured in Seventeen magazine and who will appear in a September edition of People magazine - filed into the Pleasant Valley High School cafeteria beaming with joy. They couldn't wait to line up with the Spartan cheerleaders and yell their hearts out.

One cheer especially got the Sparkles going. "The coo-kie mons-ter says that the Spar-kles are the great big coo-kie at the top of the jar," the chant went. When it was over, the girls pumped their fists into the air and did high kicks.

Herr praised Katie Dwyer of Bettendorf during practice. "Wow, Katie! You got so much more flexible since last year!"

Katie blushed when asked about the Sparkles coaches. "They're super nice," she said. "I'm going to try out for junior high cheerleading."

Maddie Wright, 10, of Davenport said she enjoys doing stunts. She said she feels like she's on top of the world when doing acrobatics. "And this year we get to wear our uniforms to school on game days," she added, excitedly.

Greg Dwyer said Cronk, the daughter of Cliff Cronk and Linda Mullen Cronk of Bettendorf, is about 20 years ahead of her time.

"She's great at motivating large groups of people," he said.

Cronk is modest about her achievements, pointing out that the Sparkles is a team effort and not her work alone.

"The awards aren't just so I can give myself a pat on the back, they're about getting the word out about the Sparkles," she said. "When we receive awards, we end up on Web sites and in news releases."

She hopes the Sparkles shatter stereotypes about cheerleaders being self-centered, popular girls.

Two men charged in Mercer County with grooming a child

Two men have been arrested in Mercer County for allegedly grooming a child.

There is a train derailment near Warren Street in Davenport that will close down the area until noontime, Scott County Administrator Mahesh Sh…

Davenport, Bettendorf schools say a mediation program has reduced suspensions. They're asking the county for more money to expand it.

Three more men from the Quad-City area are dead due to COVID-19.