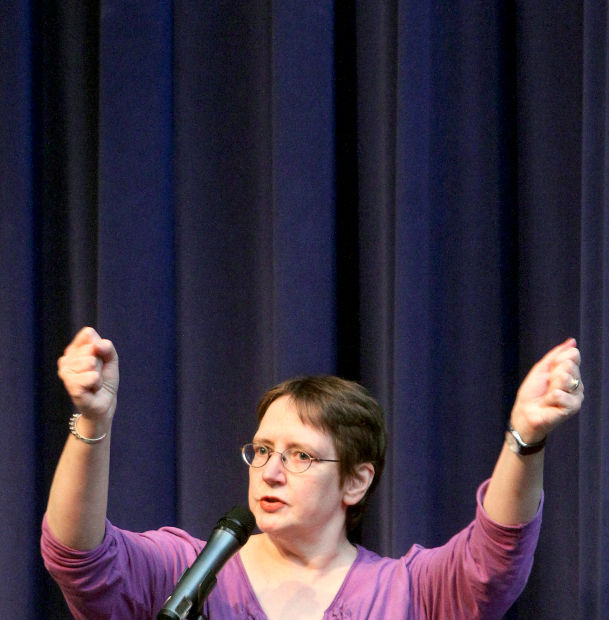 An audience of about 400 people packed the Quad-Cities Waterfront Convention Center in Bettendorf for the 2013 Honor the Women fundraising luncheon. This year, it is called "Rising Up Against Sexual Violence" and set for Oct. 3.

After Nancy Donoval was raped at the age of 19, she thought she was the only person in the world it had happened to.

There were no words available for the teenager to help describe the violence after she was sexually assaulted by a college friend at his fraternity house.

Some 35 years later, Donoval returned to that fraternity at the invitation of the organization's leaders. She talked to students about what had happened and described it as one way to help prevent such crimes, Donoval told an audience of more than 400 attending the Honor the Women luncheon held Friday at the Quad-Cities Waterfront Convention Center in Bettendorf.

The event is a fundraiser for the Rape/Sexual Assault Counseling & Advocacy program at Family Resources in Davenport.

Donoval, a professional storyteller who now lives in Minneapolis, said she shares her messages of awareness and prevention all over the country. But, she added, Family Resources is a "treasure" in the Quad-Cities and the region should be commended for supporting the program.

An exclamation point to Donovol's hour-long presentation came from Harold Mire with Isle of Capri Casinos Inc. Mire is a member of the Honor the Women organizing committee, and he explained that his first job was as a deputy sheriff in Louisiana during the 1970s.

Mire was on patrol in a remote area near New Orleans when he came upon a sexual assault that involved a 3-year-old girl. He was able to save the girl and arrest the perpetrator, and he has never forgotten the incident.

Mire led the crowd in pledging support to sexual assault survivors, as well as to their families and friends, by using the title to a well-known old song: "You'll Never Walk Alone."

"This room is filled with love for this cause and its victims," Mire said.

Donoval said there are three things Quad-City area residents can do to help prevent sexual assault from happening in the first place, and to support the women (and men) who are victims of the crime.

"Learn to become comfortable with being uncomfortable on this topic," Donoval said. "Be aware. This is in your lives."

There were 100 more people at this year's annual luncheon than in 2012, said Cheryl Goodwin, the president and CEO at Family Resources. "It grows every year," she said.

"We feel very blessed with the volunteers who plan this event," she said.

A writing workshop for survivors of sexual violence, domestic violence and human trafficking will be held in Davenport this winter.

Participation is free, but it will be determined by the application process, organizer Laura Swift said.

Participants will read and discuss testimonial writing in the workshop, reflect on how to share their own stories and engage in a series of writing exercises. The types of writing will be memoir, fiction, nonfiction and poetry.

The workshop creator and instructor is R. Clifton Spargo, the author of "Beautiful Fools, The Last Affair of Zelda and Scott Fitzgerald," which was published this year. Based at the University of Iowa, Spargo writes "The Hi/Lo" for the Huffington Post. The facilitator is Anne Ream, the Chicago-based founder of the Voice and Faces Project.

For more information or to request an application, contact Swift by Dec. 1 via email at lswift@goqcif.com.

Bettendorf woman killed in crash on I-80 in Davenport

A Bettendorf woman was killed in a car crash early Monday morning on I-80, according to an Iowa State Patrol crash report.

Davenport police said Friday that all four victims had suffered non-life threatening injuries but one was still in serious condition.

Davenport intersection saw 99 crashes since 2017. Here's how the city plans to respond

Davenport renters have until Aug. 15 to move after city orders apartments uninhabitable

City of Davenport officials on Monday ordered the Crestwood Apartments on E. 37th Street, behind Dahl Ford Davenport on East Kimberly Road, to be vacated after a follow-up inspection found the properties' owners failed to make sufficient repairs to what officials said have become substandard housing in the Quad-Cities.

Tens of thousands of dollars have been invested by Davenport Police, Crime Stoppers of the Quad Cities and their supporters on a public-awareness campaign aimed at convincing residents to stop leaving their keys in their unlocked cars and trucks. It isn't working.

Quad-Citians should mask up when they are in indoor public spaces, vaccinated or not, the Centers for Disease Control and Prevention now recommends.

A Davenport man was arrested early Sunday morning after a car chase with Iowa State Patrol ended when the man drove into a chain link fence.

An audience of about 400 people packed the Quad-Cities Waterfront Convention Center in Bettendorf for the 2013 Honor the Women fundraising luncheon. This year, it is called "Rising Up Against Sexual Violence" and set for Oct. 3.