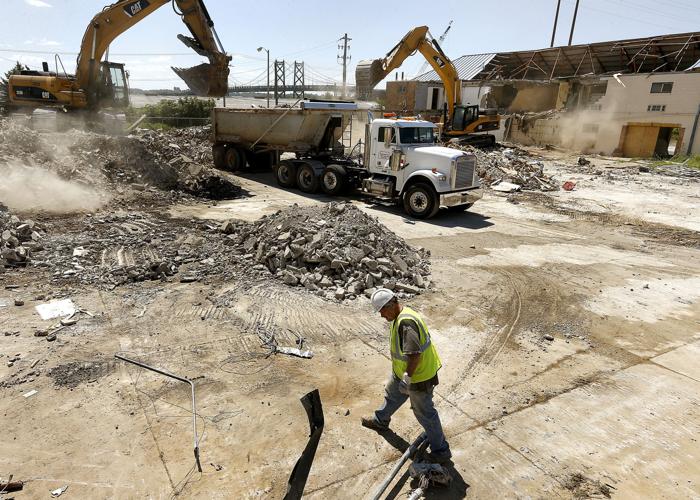 A crew from G&H Construction of Pleasant Valley use excavators Wednesday to knock down Bettendorf's Twin Bridges Motor Inn. The property is soon to become apartments. 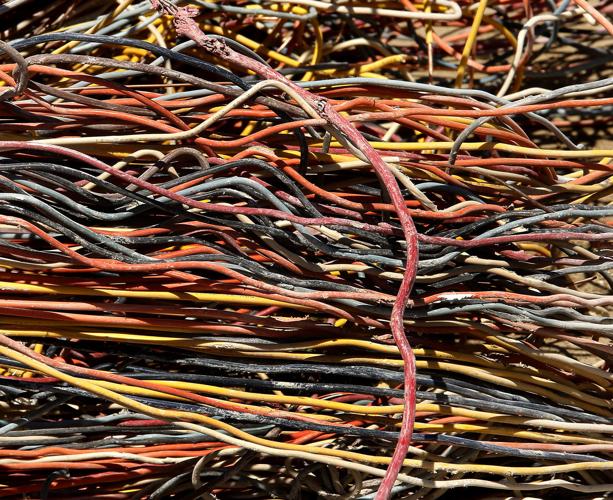 A crew from G&H Construction of Pleasant Valley sort recyclables while knocking down the Twin Bridges Motor Inn in Bettendorf.

By the end of the week, the Twin Bridges Motor Inn should be rubble.

When the remains have been carted off, the new "gateway" to Bettendorf's downtown will begin to emerge.

Construction on The Bridges apartments is to begin immediately after the site to the east of the Interstate 74 bridge has been cleared. One of two buildings will go up in the first phase, which includes 70-some units. It is expected to be finished by the middle of next year. Depending on the pace of leasing, construction on the second building, 50-some units, could begin before the first one is finished.

Des Moines-based Newbury Living is behind the $22 million development, and company president Frank Levy on Wednesday heaped praise upon Bettendorf city staffers for their work on the private-public partnership. The city (taxpayers) is putting up $750,000 in the way of a forgivable loan, and 100 percent of property taxes from the new taxable value of the property will be waived for 20 years. The project also is getting funding from Iowa's Workforce Housing Tax Credits.

Levy said his company took delivery of the last $1,000 investment needed for the project "in the spirit of heavy lifting." He then proved it, showing those in attendance at Wednesday's ceremonial groundbreaking a potato sack containing $1,000 in quarters.

Build to Suit will be the contractor for The Bridges, and company president Kevin Koellner reiterated the importance of working with city leaders who support the project.

"It can't be overstated — the amount of work that's gone into this thing," he said. "Nothing was easy."

Bettendorf Mayor Bob Gallagher pointed to the crowd for evidence of the city's support of The Bridges, noting every city council member and department head was present.

"This is the most entrepreneurial city we've worked with so far," Levy said, adding he would like to do more work in Bettendorf.

"We'd love to have you," Gallagher said.

Following many such moments of mutual admiration, talks came down to the apartments. In addition to their activity-friendly locale, just steps from the riverfront bike path and Leach Park boat landings, The Bridges will have arguably the best views in town of the new bridge construction. This was billed as a wholly good thing, absent any discussions about noise.

If both buildings are completed by late 2018 as planned, tenants will have about three years to watch the new bridge rise from the river. A full three quarters of the units will face the river and/or bridge.

Having recently toured what was left of the former motel, I can confidently predict it will be an enormous improvement. The coming of The Bridges also is inspiring additional developments in the neighborhood, including a project by Build to Suit, just across State Street.

"This is a domino — the first one," Gallagher said, adding The Bridges will make a destination of the downtown.

And many of us can appreciate the name of the new 132-unit housing complex. During some summer construction seasons, it has felt very much like we live on The Bridges.

ICKES: Demo of I-74 bridge reveals long-dark riverfront in Moline

The green hulk is disappearing from the Moline riverfront, and the land beneath it is looking larger by the minute.

VIEWPOINT: To Mom on our final Mother's Day

In all likelihood, this day will be profoundly painful for my sisters and me next year.

A crew from G&H Construction of Pleasant Valley use excavators Wednesday to knock down Bettendorf's Twin Bridges Motor Inn. The property is soon to become apartments.

A crew from G&H Construction of Pleasant Valley sort recyclables while knocking down the Twin Bridges Motor Inn in Bettendorf.