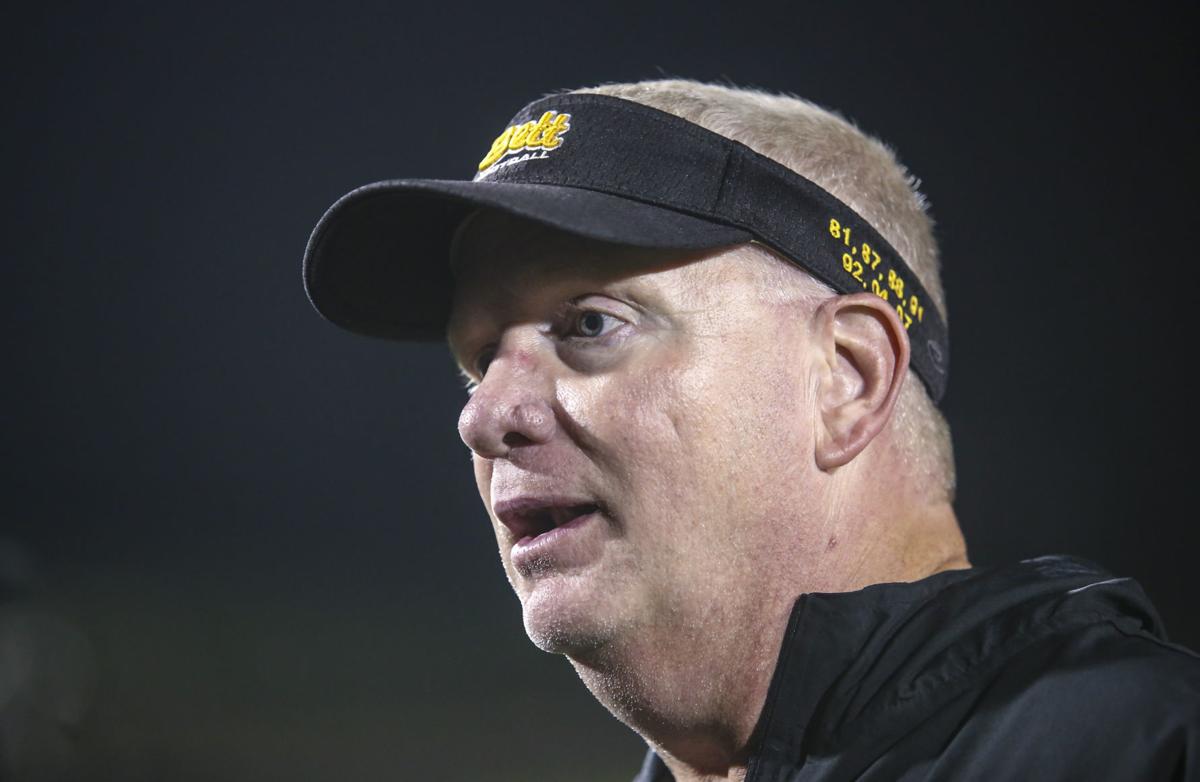 Bettendorf head coach Aaron Wiley talks with media after his team's win at TouVelle Stadium in Bettendorf on Aug. 24, 2018. 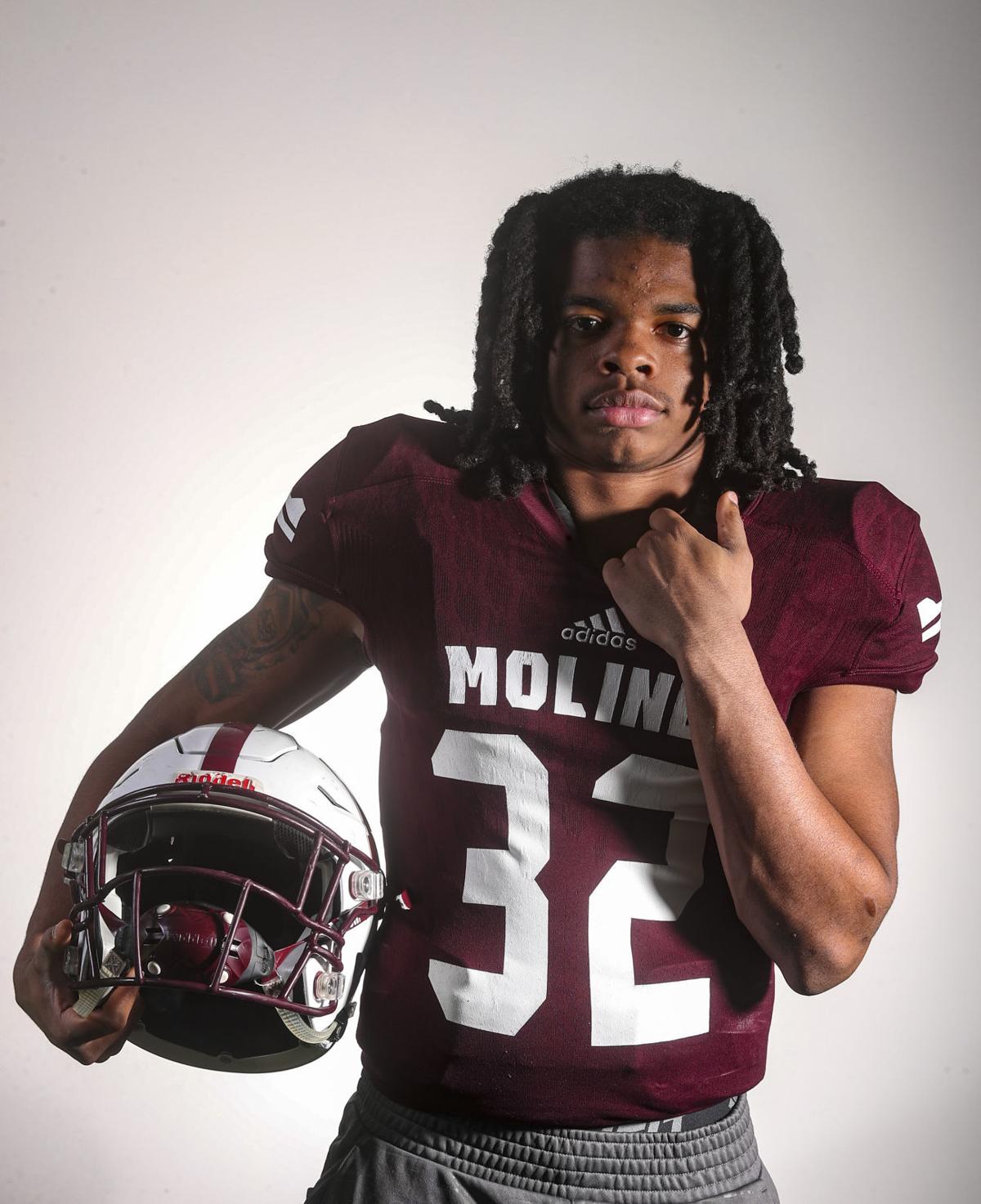 Moline running back Harrison Bey-Buie poses for a photo in the Quad-City Times studio in Davenport on Nov. 18, 2018.

You've probably read or heard something by now about the dispute between Moline High School and Bettendorf High School.

The basis for the controversy is this: Moline accused a couple of Bettendorf football coaches of exercising "undue influence" in recruiting one of Moline's star athletes to play for Bettendorf.

Moline High Principal Trista Sanders and athletic director Richard Knar were so troubled by the possibility one of their teachers, who also is a coach in Bettendorf, may have had an improper hand in a player's decision to leave Moline that they filed a complaint with the Iowa High School Athletic Association, or IHSAA.

The Association has a hands-off policy in such matters, evidently, because they simply turned the complaint over to Bettendorf to deal with.

According to a letter emailed over the weekend to Bettendorf's football staff by head coach Aaron Wiley, varsity football assistant coach Kevin Freking resigned after the principal said Freking would be suspended, pending an investigation into Moline's claims. The complaint included accusations that Freking asked high school girls to flirt with and give their cellphone numbers to the potential recruit as a means of further luring him to Bettendorf.

We'll get to that, believe me.

Meanwhile, Wiley wrote that Freking's resignation was entirely Freking's decision, not the school's.

The other main player in Moline's complaint is one of their teachers, Dan Byrne, who also is a Bettendorf coach. According to Moline's teaching roster, he still is employed by the district. When asked Monday to confirm Byrne's continued employment, the athletic director deferred to the principal, who advised I file a Freedom of Information request.

Frankly, Byrne isn't the most interesting player in this scrimmage.

Moline's complaint accuses Byrne of meeting with and exchanging text messages with a Moline football player about a meeting with Bettendorf athletic staff. Byrne also spoke with the player in high school hallways, stairwells and his classroom, even though the player wasn't one of his students, according to the complaint.

So far, the fight over a high school football player seems fairly petty, right? But wait.

Halfway down the second page of Moline's two-page complaint to IHSAA, a much darker claim emerges. In journalism lingo, we call it burying the lede (spelled this way for antiquated reasons), which happens when you begin a story with news of secondary importance, rather than the meat of the story.

Moline officials spent a half-dozen paragraphs detailing their complaints/allegations of illegal recruiting before arriving at this claim: "One of our football coaches received a text that a Bettendorf coach (Kevin Freking) asked several girls to flirt with (name redacted) and give them their phone numbers."

A second coach corroborated the claim through a former Bettendorf football player, the complaint states, and a third coach was introduced to one of the girls at a graduation party. It doesn't elaborate on what the girl had to say.

The revelation begs the reasonable question: If Moline had evidence that high school girls were being semi-prostituted in the interest of recruiting a football player, why in the world wasn't that the basis of Moline's complaint? Why was "undue influence" in recruiting by a teacher/coach the main gripe when young girls were allegedly being instructed to feign romantic interest in a young man for the purpose of enlisting his football talent?

In the email from head coach Wiley, an attempt is made to dispute what happened between Freking and the girls.

"When the (Bey-Buie) family came in, there were a handful of kids (boys and girls) still in the weight room," Wiley wrote. "Kevin Freking told these kids that Harrison (Bey-Buie) was going to be moving here and they should go introduce themselves to him because he doesn't really know anyone.

"At that point, one of the girls stood up and jokingly said, 'I'll talk to him; I like flirting.' All the girls laughed at this, including the girl who said it. Several different girls who were there back up this version of the story and verify that it is true."

Wiley leaves out the coach's response. Did Freking tell the girls they didn't need to flirt with the new recruit? Did he advise against supplying their cellphone numbers to the stranger? What did the boys who were present in the weight room have to say?

The accounting of the story as told by Wiley might carry more weight if he hadn't included this incorrect statement in his conclusion: "The Iowa State Athletic Association has completely cleared us of any wrongdoing, regarding this matter."

The IHSAA did no such thing, partly because it has no investigative authority. The head of IHSAA said, when complaints arise, they simply trust the school district to handle it. And the Bettendorf superintendent said the IHSAA was satisfied with the way the investigation was handled. But it did not "clear" Bettendorf of "any wrongdoing."

In fact, some might say the coach's effort to (his words) "set the record straight" was no more than an attempt at exercising "undue influence."

Bettendorf head coach Aaron Wiley talks with media after his team's win at TouVelle Stadium in Bettendorf on Aug. 24, 2018.

Moline running back Harrison Bey-Buie poses for a photo in the Quad-City Times studio in Davenport on Nov. 18, 2018.