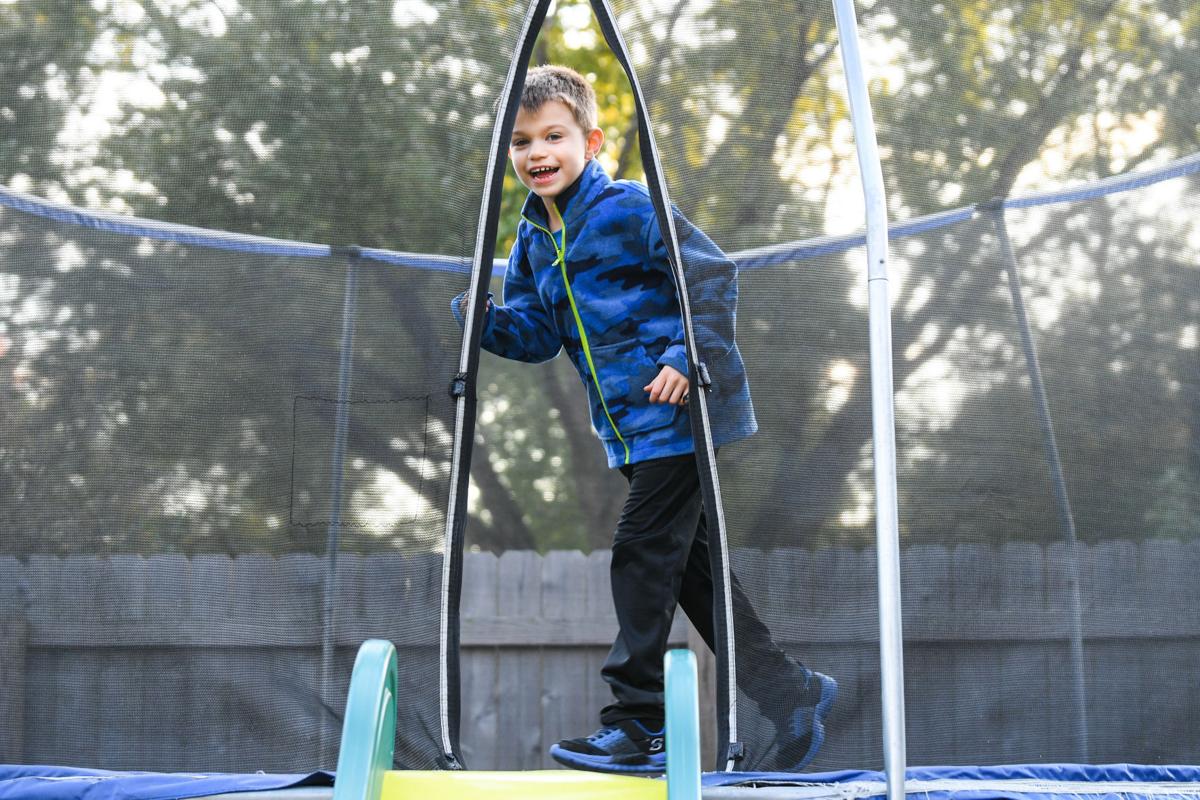 Keagan Berding, 6, plays on the trampoline in his backyard Nov. 3 in Bettendorf. Keagan has had instances of eloping when situations become overwhelming. Recently he got outside and the family couldn't find him for half an hour. Keagan’s parents are trying to get him a service dog that is trained in calming Keagan down and, if he does run, tracking him. 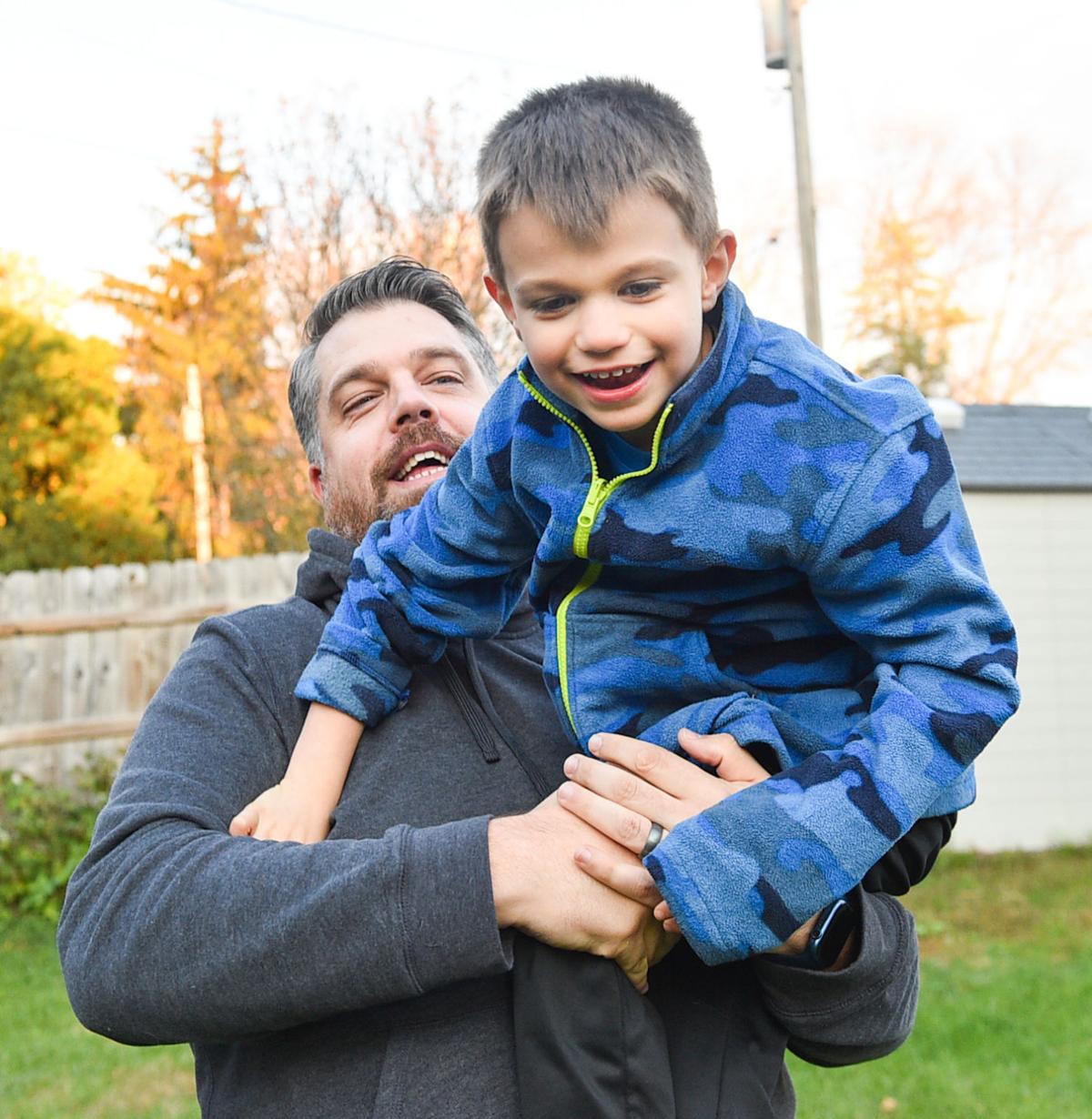 Ryan Berding holds his son, Keagan, 6, in their backyard Nov. 3 in Bettendorf. 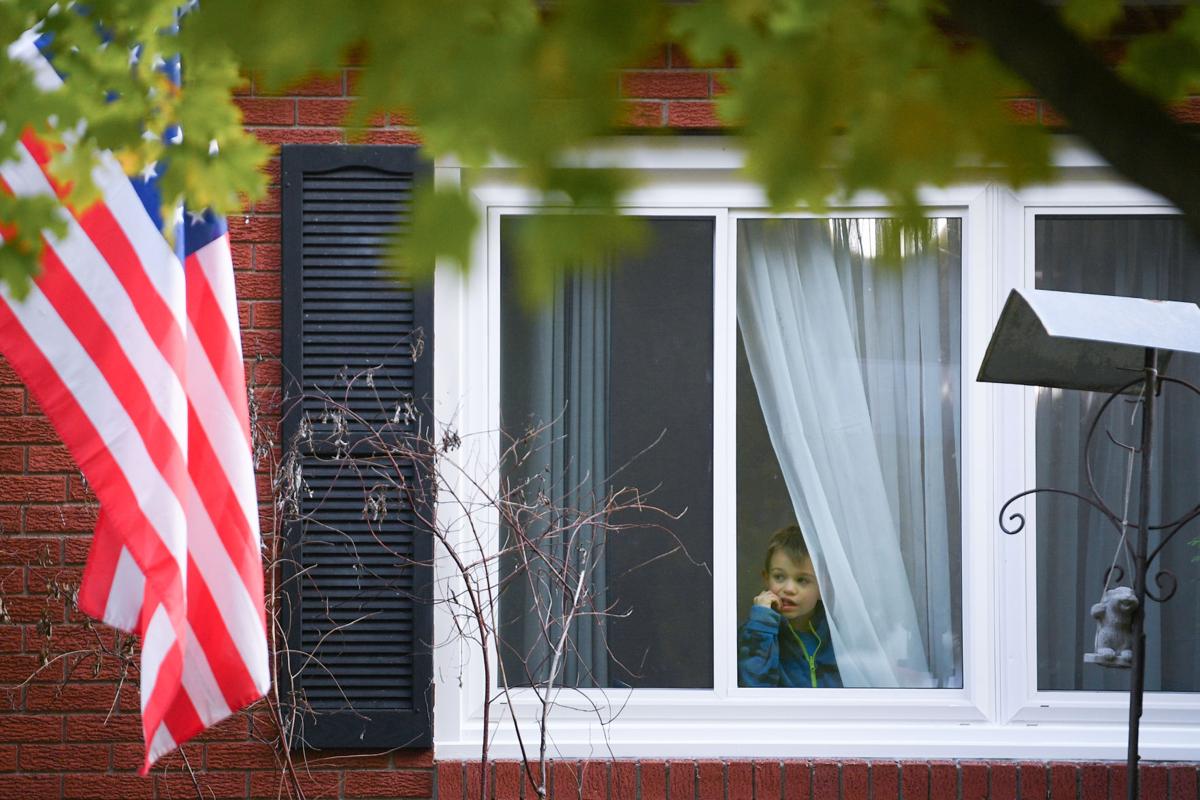 Keagan Berding, 6, looks out the window in his house Nov. 3 in Bettendorf. Keagan has had instances of eloping when situations become overwhelming. Recently he got outside and the family couldn't find him for half an hour. Keagan’s parents are trying to get him a service dog that is trained in calming Keagan down, and if he does elope, tracking him.

He did laps around the house while his parents sat on the couch on a chilly November evening, stopping occasionally for hugs, goldfish crackers and videos on his tablet.

Whenever the 6-year-old was out of the room for more than a minute or so, Ryan and Melissa Berding, his parents, pulled out their phones to check the cameras stationed around the house, inside and outside, to follow where he went. If they needed to, they also could have checked the GPS device Keagan wears under his shirt.

The doors leading outside have multiple locks, and all the windows are locked as well. One lock on the front door sends Ryan a message whenever it was unlocked.

Keagan was diagnosed with Autism Spectrum Disorder when he was 2 years old, and is nonverbal. He uses software on his tablet to communicate, but it's not a perfect system, and he can't always articulate what he wants or needs. He's very social and loves playing with other kids, going outside and exploring, but sometimes he can't handle everything going on around him.

Often when he's feeling overwhelmed or uncomfortable, he'll try to escape the situation. If he sees an open area or a way outside, he'll attempt to take it.

"We've been in this lifestyle for a while, but he's getting older, and we're pretty sure he's already faster than both of us," Ryan said. "And it's only going to become more difficult as he gets bigger and stronger."

The family is raising money to get Keagan a service dog specially trained to help with his eloping, but they have a long road ahead of them.

The first time Keagan ran out of the house was on Ryan and Melissa's 12th wedding anniversary in July. It was early in the morning, and Ryan was mowing the lawn. Melissa went outside to turn on the hose with Keagan watching from the window, and when she came back inside, he was gone.

"It was a half an hour of just the worst possible feeling ever," Ryan said.

In his pajamas with no shoes, Keagan had disappeared. His parents called the police and frantically began searching for him, thinking he may have headed toward the park near their house. He wasn't there.

Eventually their neighbor found the couple and said he was in their house. He had gone through their back door and was having a grand time running around inside.

It was days before they could stop getting up in the night to make sure he was still in bed.

"Every possible thing that could have happened in that time was just going through my head," Melissa said. "And you would think that that would be the one and only time that that would happen, and it's not."

Keagan ran out of the partially-opened garage door the second time, which had been propped open to allow for air flow. Neighbors had seen Keagan running, and Ryan and Melissa found him at the park.

Before these instances they hadn't really considered getting a service dog, as they didn't want to add another pet to the house. Now, however, they believe it's necessary to keep Keagan safe.

"It's how he deals with anxiety in large spaces, bright lights and unfamiliar places, his instinct is just to run," Ryan said. "And, unfortunately, he's not aware of situational dangers. He's not aware of, like, 'If I run into a street a car can hit me.' That never occurs to him at all. So it's really scary."

The family currently has $10,695 out of $17,000 raised through 4 Paws for Ability, an organization that places service dogs with people with disabilities across the globe.

One donor, a family in California who has never met Keagan or his family donated $10,000. Ryan reached out to 4 Paws for Ability to make sure they were the intended recipients, and learned that the donor has a son on the spectrum as well and wanted to help.

Kelly Camm, 4 Paws for Ability development director, said the organization will front another $33,000 to train one service dog for Keagan. The services the dog needs to provide for the family, like tracking and tethering, require intense — and expensive — training.

Families also have to learn how to work with the dogs, so they go through nine days of training as well. As the organization primarily works with children on the spectrum, parents need to be involved with handling and caring for the dog.

"We know that with kids with autism, it'll be many years before he can handle a dog on his own," Camm said.

Tethering refers to the dog acting as an anchor spot if Keagan tries to run. He would be connected to the dog through a belt or backpack leash, with the parents also having a leash on the dog to hold. If he starts to take off, the dog could hunker down to keep him in place. As for tracking, the dog would be able to aid in search and rescue if Keagan does successfully elope.

Despite all the skills this dog will have, Ryan and Melissa hope they will only be used as a last resort. The dog will primarily be a source of comfort for Keagan, that he can turn to when overstimulated or upset rather than run. Keagan already goes to one of the family's dogs, Cooper, for comfort by lying on him and such, but Cooper isn't trained to deal with that sort of interaction.

The dog could also give Keagan a measure of freedom, so his parents wouldn't have to have a hand on him at all times. They would never use the service dog as a means of supervision, but its skills would be another tool in their toolbox of keeping Keagan happy and comfortable.

"The part to me that I want for him, that we want for him, is the security, for him to feel more comfortable to be part of situations," Ryan said.

Even if the fundraiser reached its goal today, the Berding's wouldn't get a dog until 2024. 4 Paws for Ability is booked out until then, Camm said, and it takes time to train a dog in the special skills they'll need to work with their people.

Not all dogs make the cut. Some just don't show the attention and dedication it takes to make it as a service dog, making the number of those that can actually be placed with someone even smaller. While they train a few different breeds, Camm said Keagan will probably receive a Golden Retriever/Labrador mix.

"We need to make sure that this dog can track, because [escaping] isn't a joke," Camm said. "This is serious and life threatening."

This year, 4 Paws for Ability will place 124 dogs in homes. The organization has placed more than 1,500 dogs since its founding in 1998, primarily with children on the spectrum.

Despite the cold, which Ryan said Keagan didn't like, he sprinted into the backyard to jump on the trampoline in the fading sunlight. His sister, 10, came out and jumped with him for a while.

Keagan loves going to Pleasant Valley Community School District and Balance Autism, and was very excited to go back after the COVID-19 pandemic kept him home.

While maybe not one of the most advertised benefits of owning a service dog, Ryan said Keagan bringing his dog to school and other places could work as an ice-breaker for other kids. But that's just icing on the cake of helping Keagan feel more comfortable and happy in a world that can be overwhelming.

"He has moments where he'll be flapping, clapping or doing something along those lines, and he'll just look at me like, 'I don't know why I'm doing this,' almost like he's asking me for help, and I'll give him a big squeeze or something and sometimes it works. Sometimes it doesn't," Melissa said. "But he just seems so uncomfortable in his own skin at times, and if I can give him a bit of relief with a service dog why wouldn't I do that?"

Keagan Berding received full funding for service dog. But his family isn't the only one in the Quad-Cities raising money for a service dog

Nestlé Purina PetCare Company donated the remaining funds needed to get Bettendorf resident Keagan Berding a service dog. He's not the only kid in the Quad-Cities who is hoping to receive a service dog for safety and comfort.

Keagan Berding, 6, plays on the trampoline in his backyard Nov. 3 in Bettendorf. Keagan has had instances of eloping when situations become overwhelming. Recently he got outside and the family couldn't find him for half an hour. Keagan’s parents are trying to get him a service dog that is trained in calming Keagan down and, if he does run, tracking him.

Ryan Berding holds his son, Keagan, 6, in their backyard Nov. 3 in Bettendorf.

Keagan Berding, 6, looks out the window in his house Nov. 3 in Bettendorf. Keagan has had instances of eloping when situations become overwhelming. Recently he got outside and the family couldn't find him for half an hour. Keagan’s parents are trying to get him a service dog that is trained in calming Keagan down, and if he does elope, tracking him.