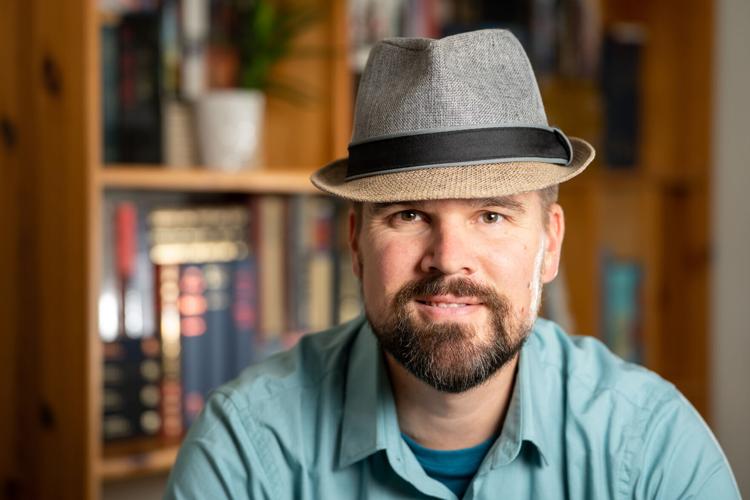 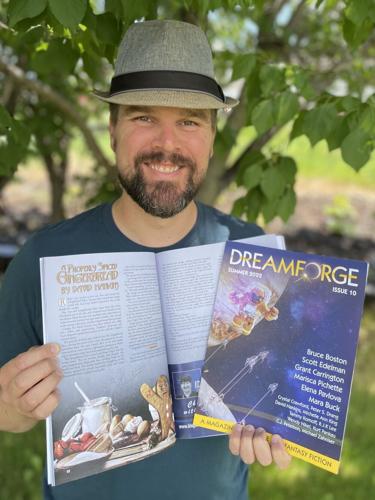 David Hankins holds his short story, which was published in "Dream Forge" this summer.

To David Hankins, bedtime stories are a scam. Rather than drifting off to sleep with a line about happily ever after, his daughter remained awake to demand another — and eventually suss out inconsistencies in plot lines.

"Kids are brutal when it comes to the accuracy of fairy tales," Hankins said. "So I had to start writing stuff down, and as I wrote it down it turned into two and a half novels."

What began as an attempt to keep the Bettendorf resident's characters and conflicts straight turned into a passion for writing stories, a passion that has gained international recognition.

Dan Hankner, a Davenport resident, was a semifinalist in the competition, and two other Iowans received honorable mentions.

"Death and the Taxman" explores what would happen if the Grim Reaper became human, for once losing at his rigged game. Hankins asked the question of whether Death would cling to life like humanity does with humor and wit, he said, taking inspiration from Terry Pratchett's writing style.

Hankins had no knowledge of Writers of the Future before submitting his work. After getting rejections from publishers for his full-length novels the retired Army serviceman decided to turn to short fiction, submitting pieces to contests and anthologies.

"I found them on a Google search for short story contests," Hankins said. "I pulled it up and went, 'Oh, hey, look at that, this has pretty good prize money. I'll write a story and win that no-problem.' I had no idea at the time that it was the largest writing contest of its type."

His first submission to Writers of the Future was a sort of prequel to "Death and the Taxman," and garnered an honorable mention from judges. The fifth time was the charm, and in addition to a cash prize and having his story published, Hankins will also travel to Hollywood next year for a week to attend a writing conference and gala. His daughter will come along as a plus-one, he said.

With the win under his belt and other stories getting published, Hankins said he'd like to return to writing full-length novels in the future and further his writing career. He's been able to explore the community surrounding Writers of the Future in the 18 months since he submitted his winning story, finding a new network to tap into.

Having an accolade from Writers of the Future helps up-and-coming writers stand out from the crowd.

"If someone puts in their pitch letter 'I won Writers of the Future,' their work is automatically taken out of a slush pile and read by an editor because they know that this person is past the trial by fire to win this contest," Goodwin said.

From our archives: Quad-City Coal Mining

David Hankins holds his short story, which was published in "Dream Forge" this summer.