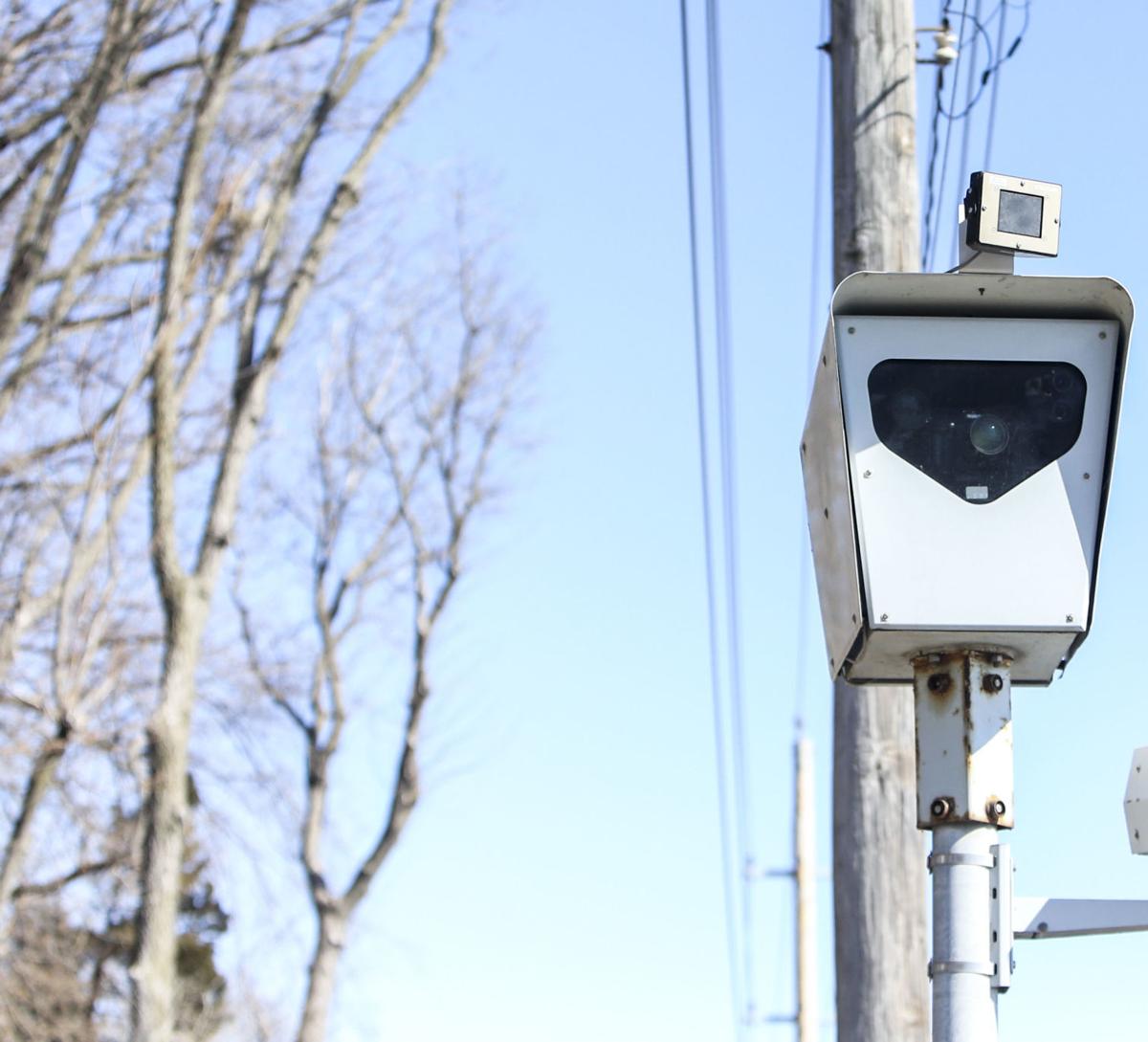 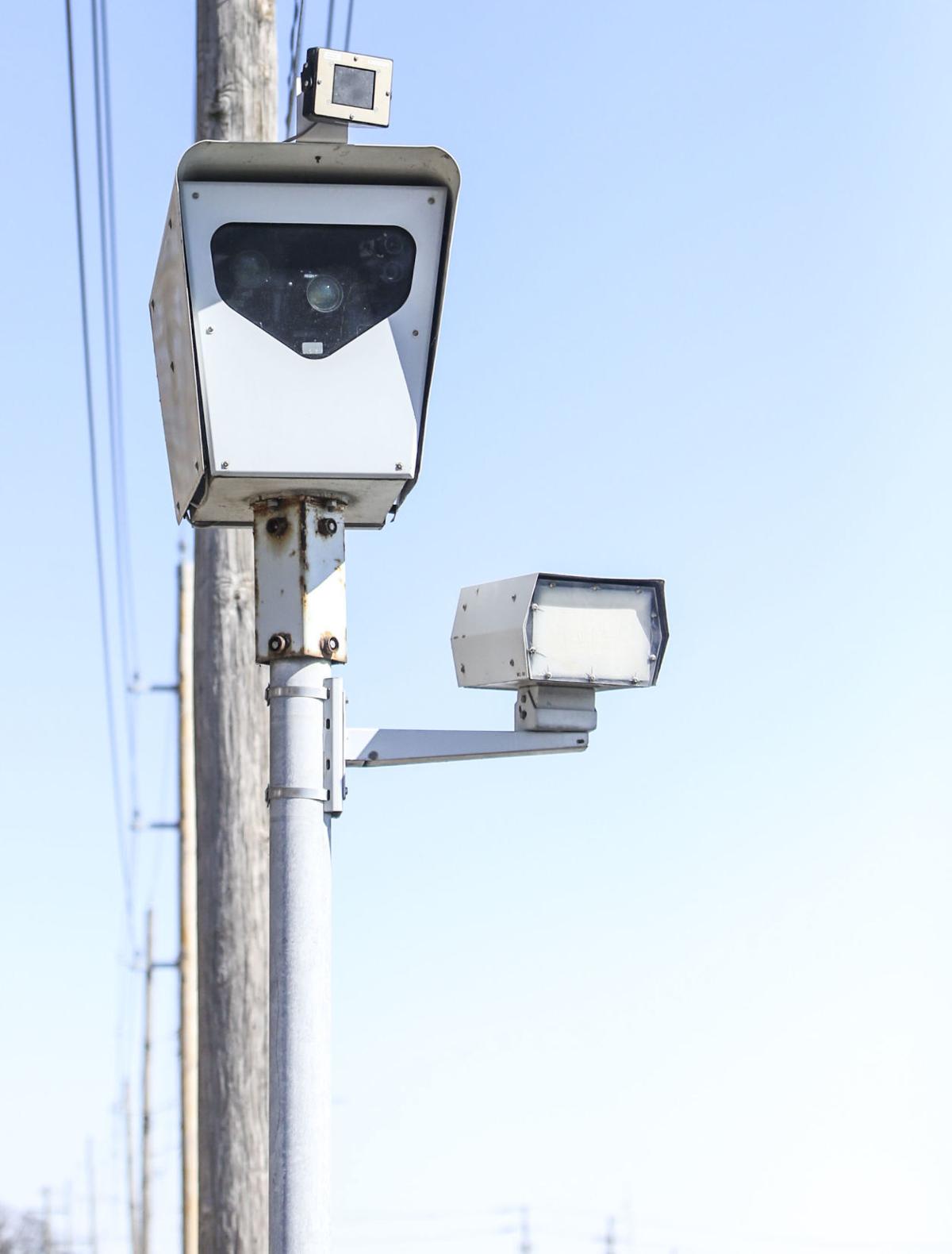 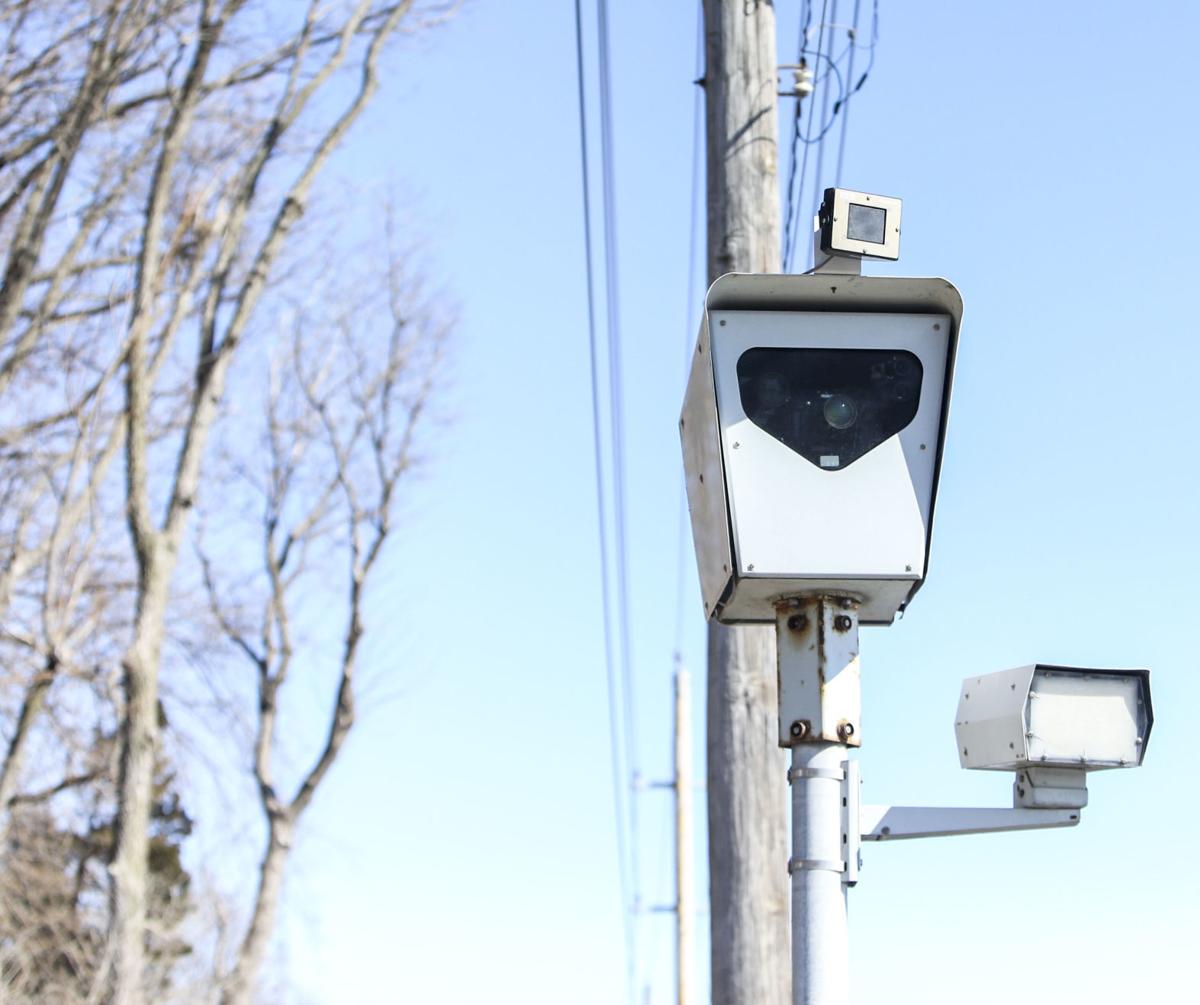 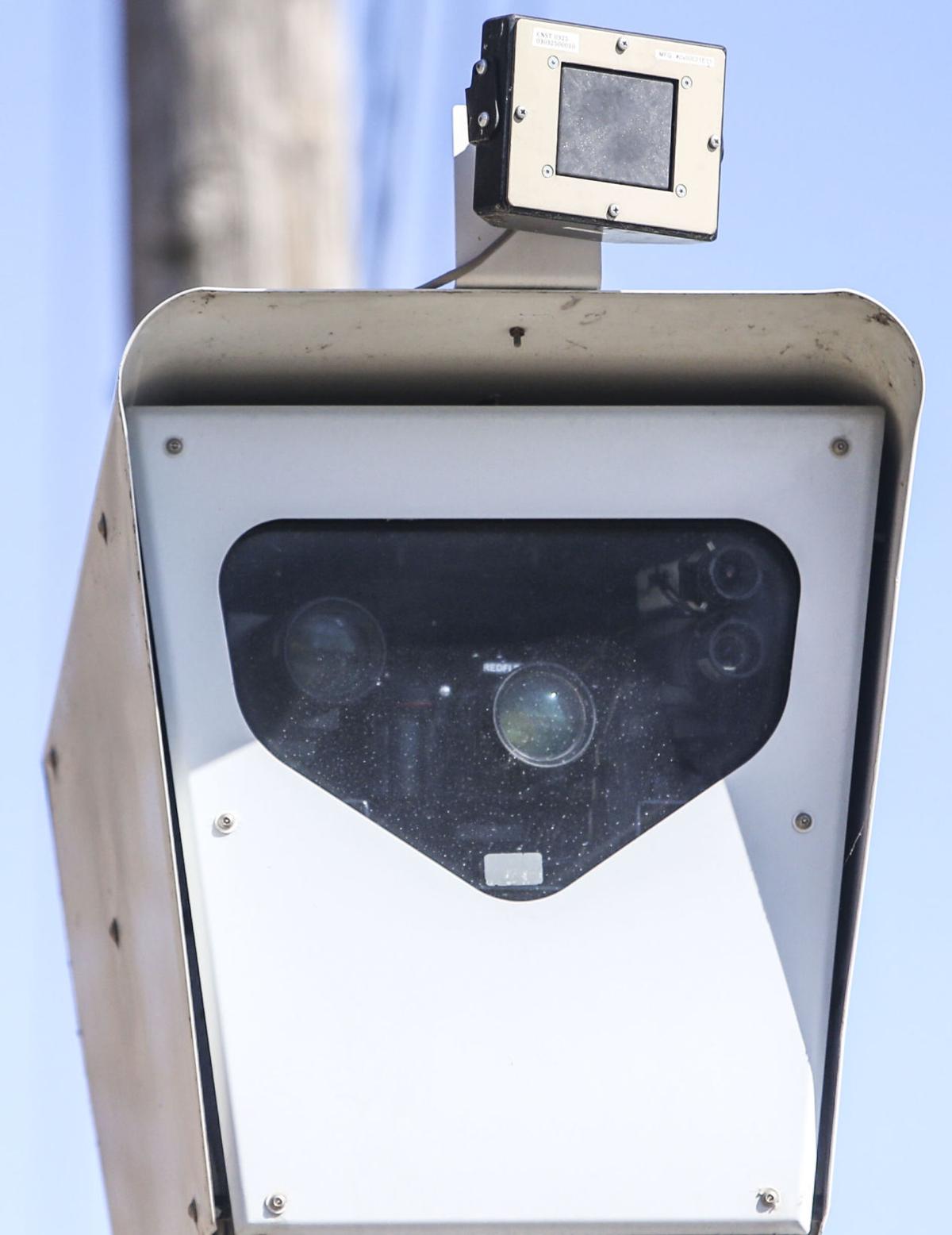 Davenport speed cameras on River Drive in Davenport on Monday. 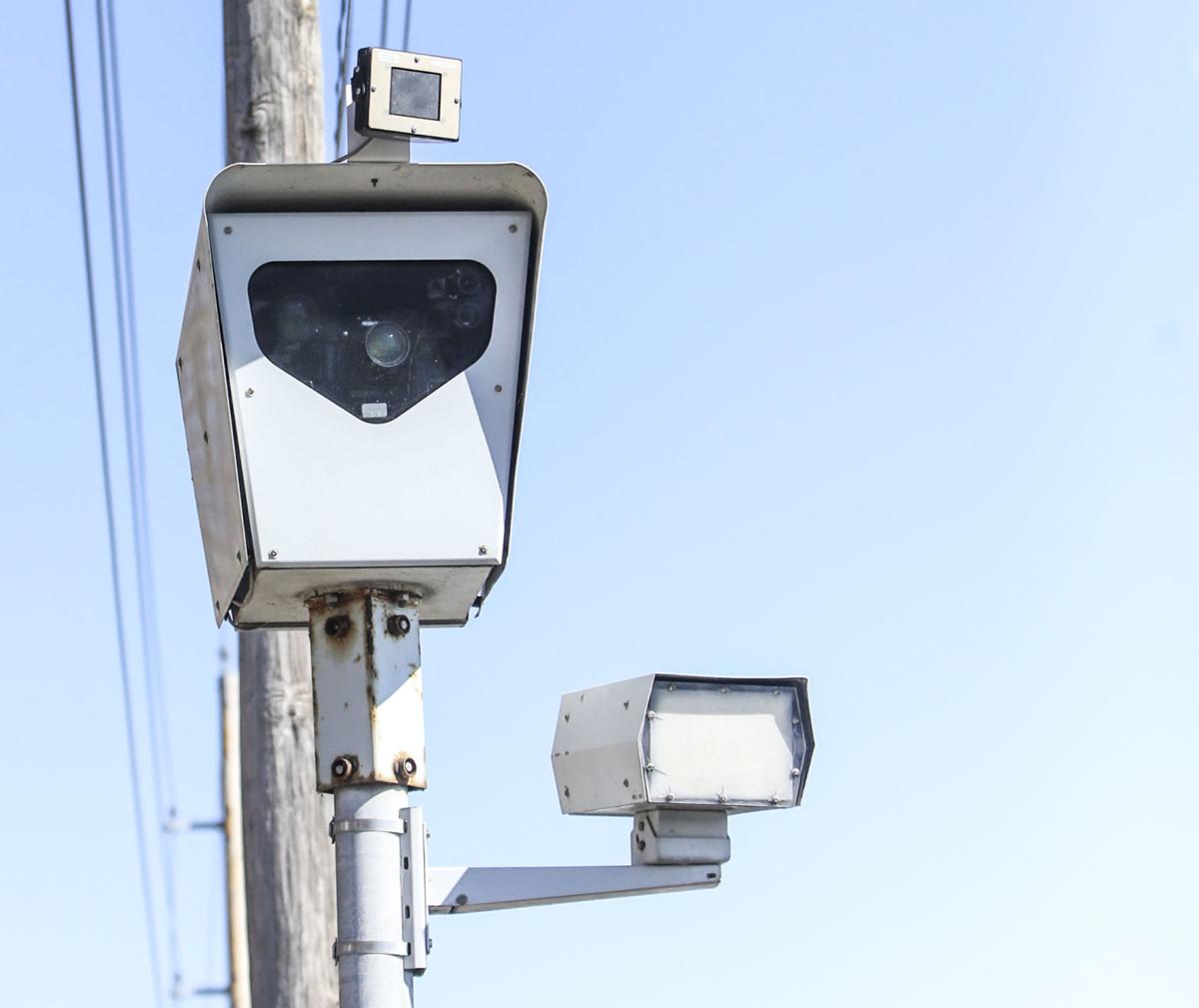 Rather than ban the use of automated traffic enforcement cameras in most of Iowa, city of Davenport officials say uniformity is needed in their use and collection of fines across the state.

"If (traffic cameras) are prohibited, it would have substantial operational and fiscal impacts," Sarah Ott, chief strategy officer for the city of Davenport wrote in an issue paper outlining the city's opposition to legislation that would prohibit the use of such cameras.

The Iowa Senate Judiciary Committee on Monday was scheduled to take up a proposal to ban traffic cameras throughout Iowa, with the exception of a stretch of Interstate 380 in downtown Cedar Rapids.

Senate Study Bill 1176 seeks to bar Iowa communities from using automated traffic enforcement systems, reviving previous attempts over the years by Iowa lawmakers to prohibit or regulate use of the devices, which capture video of vehicles speeding or running red lights. Law enforcement then reviews the images and issue citations to the vehicle's registered owners.

Iowa cities, including Davenport, LeClaire and Muscatine, see the cameras as traffic safety tools that reduce public safety costs, while some lawmakers slam them as cash-generating constitutional violations.

The bill, sponsored by Sen. Brad Zaun, R-Urbandale, would require local authorities to remove the devices by July 1, the start of fiscal year 2022. It would not invalidate traffic tickets issued before then.

In total, 11 Iowa cities have automated traffic enforcement systems, according to the Iowa Department of Transportation.

The city of Davenport uses the cameras at eight locations along its primary highway system and major thoroughfares for both speed and red-light enforcement.

In Muscatine, cameras cover eight approaches at five intersections to monitor red-light and speed violations, including along U.S. Highway 61.

All infractions are reviewed by a sworn police officer or a trained Community Services Specialist prior to a citation being issued, according to city officials, and locations are marked by signs alerting motorists to their use and presence.

In Davenport, the cameras are calibrated once a month to ensure accuracy.

Additionally, the camera systems can be retrofitted to recognize license plates to help locate and apprehend wanted criminals and assist in the recovery of endangered, missing or abducted children.

"On two occasions, the cameras in Muscatine have been used to corroborate evidence in criminal cases, one being a drive-by shooting," according to the Muscatine Police Department. "They have been invaluable in these cases."

The cameras provide 24/7 traffic monitoring and follow up enforcement at a significantly lower cost than deploying officers to those areas. That frees cities to focus strained resources on more pressing policing needs, city officials have said.

Additionally, the cameras generated about $1.5 million in revenue from traffic citations last fiscal year for the city of Davenport. That money is funneled into the city's general operations, about 65% of which is dedicated to public safety.

In Muscatine, eliminating the traffic cameras would result in an estimated $500,000 loss in revenue supporting city operations and public safety initiatives, according to city officials.

"If they were to be banned, we would have to reassess our approach and public safety budget," Muscatine City Administrator Carol Webb said. "But, for me anyway, the biggest concern would be the safety issues (created by their removal)."

Muscatine issued 3,052 citations for red-light violations in 2020 and 9,681 citations for speeding, 1,569 of which were generated from a mobile speed vehicle — a black Chevy Sonic car with the city's logo on the side that is stationed at locations around Muscatine and uses a mobile camera to record vehicles' speed and license plate numbers.

The traffic cameras have been challenged on various constitutional grounds through several lawsuits in recent years.

The Iowa Supreme Court in 2019 ruled Cedar Rapids' use of traffic cameras do not violate a constitutional right to due process. The court also dismissed arguments the cameras are more about generating revenue than safety.

"We have a law that is enforceable and doesn't impose on anybody's rights," Webb said. "But, also protects our citizens against safety issues and safety concerns."

A LeClaire city official did not immediately respond to a request for comment Monday.

Rather than ban the cameras, or undermine the financial penalty and deterrent created by the devices, Ott said Davenport city officials support legislation that would create uniformity in their use across Iowa.

"While we believe that Davenport is a judicious user of (traffic cameras) we know there are other municipalities that use them in far less judicious ways," Ott said.

Davenport city officials say they would support legislation that prohibits placement of traffic cameras on interstates, as well as uniform thresholds for issuing citations, including a minimum speed in excess of 12 mph over the posted speed limit.

"We think it's important to create some uniform threshold requirements across the state so the motoring public can expect the same thing no matter what municipality they are in," Ott said.

Additionally, city officials say the state should enact a uniform process that allows violations to be handled by city clerks as opposed to district courts.

In 2018, the Iowa Supreme Court ruled that city laws on collecting traffic camera fines conform to state law that governs municipal infractions and their handling through the court system, and not rely on their own administrative procedures.

The ruling provided that cities can no longer find the recipient of a citation liable if they failed to pay or failed to appeal a citation. If an individual does not voluntarily pay and admit liability, cities must either file a municipal infraction in court or let the citation be.

Davenport does not issue municipal infractions, "because of the significant impact that tens of thousands of (traffic) tickets would have on county courts," Ott wrote.

Rather, Davenport city officials argue Iowa Code already carves out a comparable exception for parking tickets. Creating similar language allowing the collection of uncontested traffic camera fines by city clerks "is in the best interest of efficient police departments, city governments, county governments and ATE violators," according to the city.

"We believe bringing uniformity to the process so that there are clear expectations across the state is going to be more helpful that outright banning it," Ott said.

Location of ATEs in Davenport:

Lawmaker seeks to ban traffic cameras in Iowa, except along Cedar Rapids’ S-curve

There are two enforcement zones, with one along Interstate 80 just before the I-80 bridge and the other in the 2300 block of South Cody Road (U.S. 67). Signage has been posted in both locations.

Use of the devices has led to privacy concerns by the ACLU over how information collected by the readers is being collected, shared and utilized.

Davenport speed cameras on River Drive in Davenport on Monday.