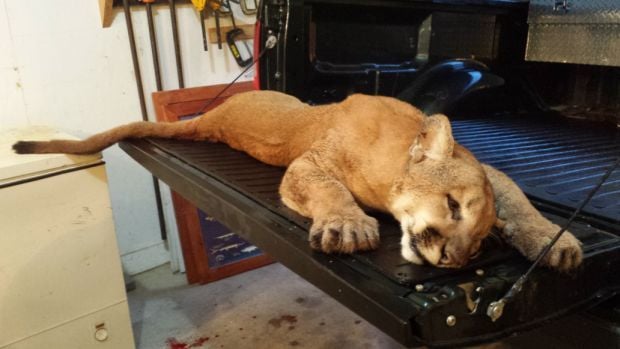 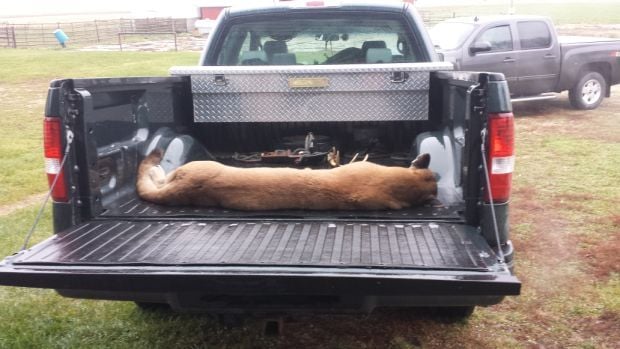 An Illinois Department of Natural Resources conservation officer shot and killed a cougar Wednesday on a farm near Morrison in rural Whiteside County, according to a news release issued by the department on Thursday.

Wildlife biologists will examine the remains of the cougar to learn more about the animal’s recent history and origin.

A Whiteside County farmer called the DNR Wednesday, reporting that a large cat was spotted leaving a cornfield and running toward the farmer's home and outbuildings. When the conservation police officer got to the farm, he checked a horse barn and lot and discovered the cougar in a concrete tunnel beneath a corn crib.

After discussing the situation with the farmer, his wife and DNR officials, the officer shot the cougar with a rifle. The cougar appeared to weigh more than 100 pounds and was 5 1/2 to 6 feet in length. Wildlife biologists will conduct a necropsy.

"It was a young male," DNR spokesman Chris McCloud said Thursday. "That is consistent with past incidents when young males roam away from home in search of food and mates."

Cougars, also known as mountain lions, were eliminated from Illinois before 1870 and are not protected by the Illinois Wildlife Code, according to the DNR release.There is no evidence that a resident breeding population exists in Illinois, but occasional transient cougars have been found in the state in recent years, likely dispersing from states to the west of Illinois, including South Dakota.

"There is no population that we are aware of," McCloud said. "Cougars have been documented in Iowa, Wisconsin and Missouri, all states that border Illinois."

He said that people seem to think the sightings of cougars increases in the fall and winter.

"That's because it's hunting season, and everybody's out looking for things," McCloud said. "People have trail cameras up looking for deer and other game."

According to the DNR, there have been three confirmed cougars in Illinois between 2002 and 2008. A male was killed by a train in Randolph County in 2002. Another male was killed by a hunter in Mercer County in 2004. A third male was shot and killed on the north side of Chicago in 2008. Although analysis indicates these three animals were genetically similar to mountain lions from South Dakota, their history in the wild is uncertain.

More recently, images taken by trail cameras in Jo Daviess County in September 2012 and in Morgan, Pike and Calhoun counties in October and November 2012 were confirmed by DNR as showing a live cougar. Given the long distances typically traveled by cougars and the proximity of the counties, especially Calhoun, Morgan and Pike, it is possible the camera images may show the same animal, the DNR said.

For more information on cougars, check the Living with Wildlife in Illinois website at web.extension.illinois.edu/wildlife.

EVANSDALE, Iowa — The Iowa Department of Natural Resources is warning people to stay away from potentially dangerous wildlife after an Evansda…