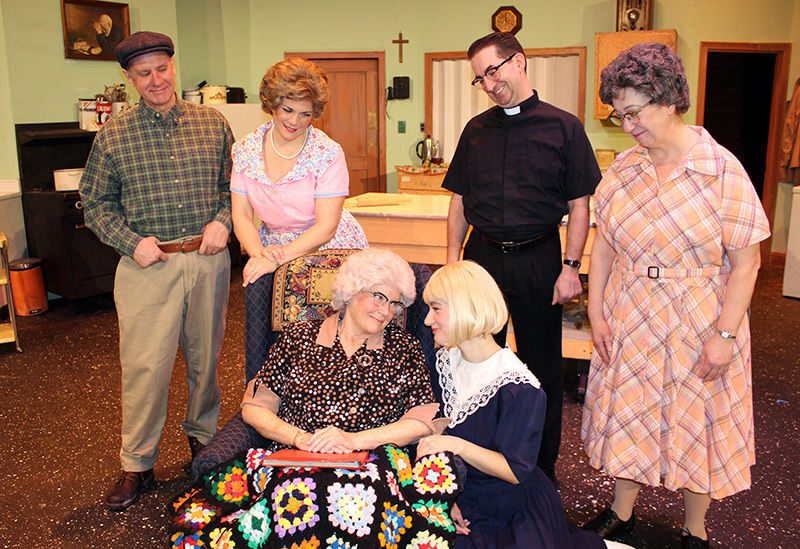 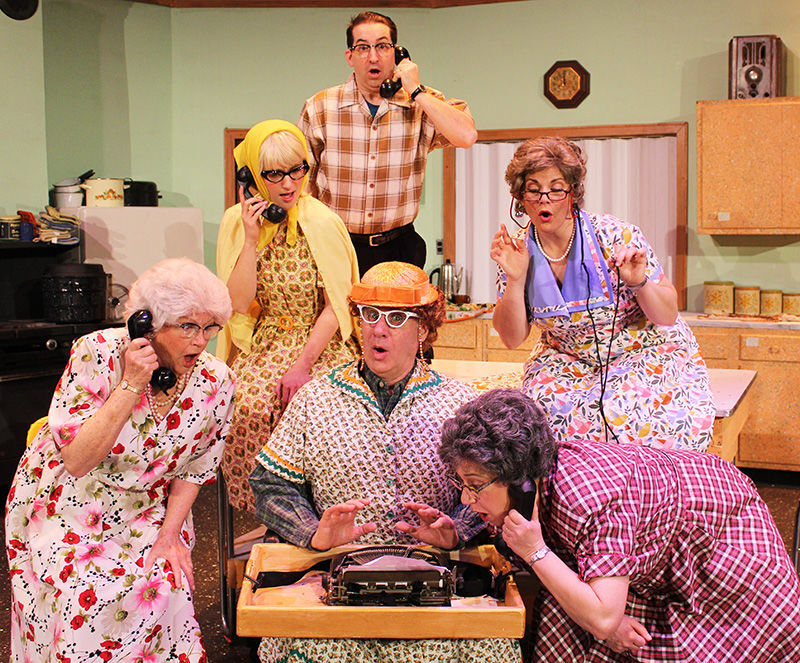 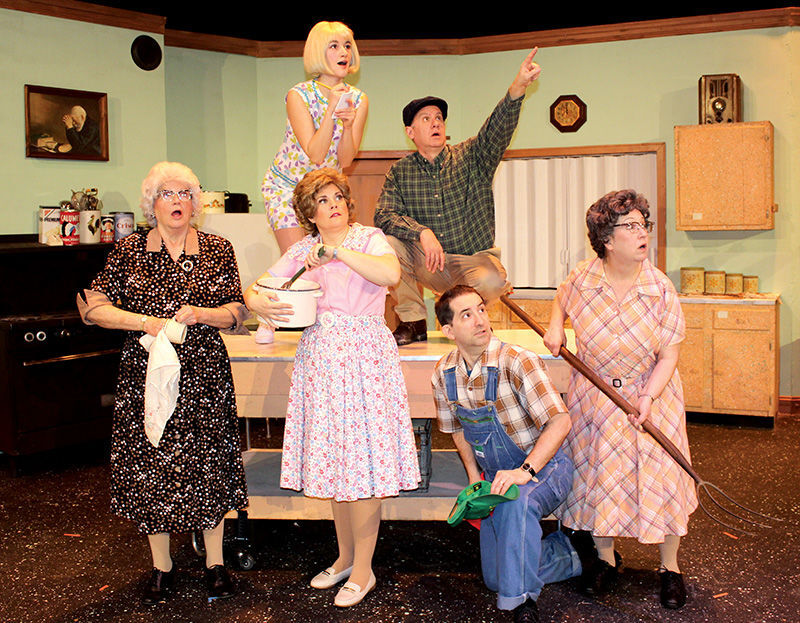 Laughter and music returned to Rock Island's Circa '21 Dinner Playhouse last week for the first time in several months.

Masked up and tickets in hand, Mary and David Coker made the three-hour drive from Manteno, Ill., south of Chicago to Rock Island to see the seventh installment of the popular The Church Basement Ladies stage series, "You Smell Barn."

"I don't think you can beat the value of Circa '21. We try to hit several of the dinner theaters in the northern Illinois area, and this is one of our favorites," Mary Coker said.

The couple has been attending performances at the dinner theater for the past three years.

"It wasn't just live theater shut down. Everything was shut down," Mary Coker said. "And it's been a tough year. ... We're certainly glad to see things open up and being able to get back out and come see shows" and experience "laughter, camaraderie" in person "in a safe, fun manner," rather than in front of a television or computer screen.

The performance is the venue's first mainstage production since area theaters closed in November. Up until last week, the theater had only been open two of the past 12 months because of COVID-19 mitigation measures enacted in Illinois.

"It's been a pretty devastating time for us," said Brett Hitchcock, Circa's director of audience development. "In the 44-year history of this operation, we have never been closed for anywhere close to that amount of time."

The theater closed in March of 2020 as it was on the cusp of opening a new show, "Saturday Night Fever."

"We had actors from all over the country. It was rehearsed. It was ready to go. The set was up when we got word that everything had to close," Hitchcock said, forcing the family-owned theater to lay off its roughly 80-person staff, with the exception of three employees — Hitchcock, his father and a business manager.

"We just started to accept the new reality with the great unknown, not knowing when we were going to be back," he said.

Come the fall, the theater was able to open for two months with one show only to again close its doors for the holiday season. The move came as Illinois Gov. JB Pritzker reinstated COVID-19 mitigation efforts as cases surged.

It was the first time since 1977 the Rock Island-based dinner theater had gone dark over the holiday season, when the theater draws its biggest crowds.

As in March, the set was built and the cast was already rehearsed for its winter production, "but we had to send them home and postpone the show" to the end of 2021, Hitchcock said.

Outside of some viral shows, including online cabarets where people purchase a link to watch a video, it had been a barren year for the theater.

"Fast forward to now, it's just so nice and so encouraging to be able to come back," Hitchcock said. "I think people have done the streaming services to death over the last year. ... Being able to give people that escape for a couple of hours so they don't have to think of coronavirus and anything going on in the world or going on in the country, and just escape and be entertained, you could just see the excitement with people coming in.

"People told us they're just so tired of being cooped up and were just ready to go, were ready come back to live entertainment," he said. "And you could see it with out staff, too."

Hitchcock said he's hopeful the pandemic and a return to normal "is trending in the right direction."

Because of the Phase 4 rules of Restore Illinois, capacity for each performance is limited, and plated dinners will be served in lieu of the traditional buffet meals. For the safety of guests and staff members, face masks must be worn to enter the theater, when interacting with the staff and whenever guests are away from their tables.

The theater is also staggering arrival times of guests, offering hand sanitizer and spacing seating to every other table.

"We have been overly cautious," Hitchcock said, stating the theater held off a bit to reopen as it waited "for shots to get in arms and people to get more comfortable" venturing away from home.

Financially, the for-profit theater was fortunate to have a nest egg to fall back on and took advantage of the federal Payroll Protection Program and local grants, along with receiving donations, to stay afloat.

"Bringing more and more staff members back, it's just encouraging and very exciting to be able to get back to what we do, and that's entertaining people," Hitchcock said.

Autumn O'Ryan, who plays "Vivian Snustad," the matriarch of the church basement kitchen in the Church Basement Ladies production, has been unemployed for the past year because of COVID-19 restrictions.

O'Ryan was in Fort Myers, Florida, at the Broadway Palm Dinner Theatre when the production shut down after three weeks. She stayed in Florida, living with her son for three months, while waiting for another production to open in December, only to see it too canceled. The news sent her into another "plummet" of anxiety, fear and uncertainty about her professional and personal well-being.

O'Ryan, who has been acting for more than 35 years, kept singing at home, not knowing if she would return to the stage anytime soon. When the news came about the performance at Circa '21, O'Ryan danced around her apartment alone.

"I'm very, very grateful to be back on stage," O'Ryan said. "I'm not going to lie, it was an incredibly long year with no work. And at times hopeless. Just feeling out of control (and) not knowing what was going to happen. I don't think I ever want to go through that again."

Lynn Brenders and Barbara Laugel, both of Peoria, look over the menu before a performance of “Savannah Sipping Society” at Circa ’21 Dinner Pl…

Steven Knorrek, of Bettendorf, takes a seat before a performance of “Savannah Sipping Society” at Circa ’21 Dinner Playhouse Wednesday, Sept. …

Guests wearing face masks take their seats before a performance of “Savannah Sipping Society” at Circa ’21 Dinner Playhouse Wednesday, Sept. 9…

Actress Sarah Hayes performs a monologue as “Jinx” during a performance of “Savannah Sipping Society” at Circa ’21 Dinner Playhouse Wednesday,…

Circa ‘21 is requesting online submissions for their upcoming production of Beehive: The ‘60s Musical.

It is the first time since 1977 the Rock Island-based dinner theater will be dark over the holiday season.

It's showtime again at Circa '21 in Rock Island

Theater is a uniquely human connection. It brings together actor and audience for a once in a lifetime moment, one that will not be the same t…

Theater lovers, rejoice! After six months of shutdown, the Circa '21 Dinner Playhouse will reopen to limited crowds Wednesday with its product…

In its 44th season, Circa '21 Dinner Playhouse will finally get to present “Saturday Night Fever,” along with five other main-stage shows, thr…