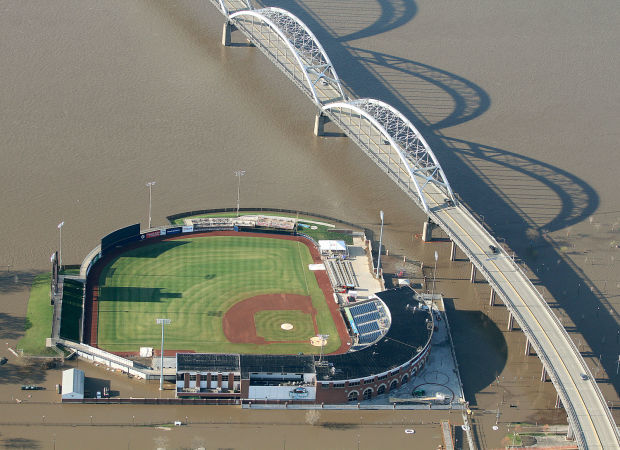 Modern Woodmen Park is surrounded by floodwaters from the Mississippi River in Davenport during a 2013 flood which crested at 19.8 feet, nearly five feet above flood stage. A permanent berm and portable panels protect the home of the Quad-Cities River Bandits when river leaves its banks. 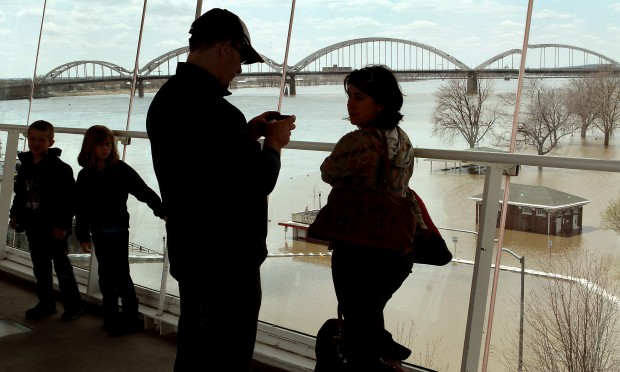 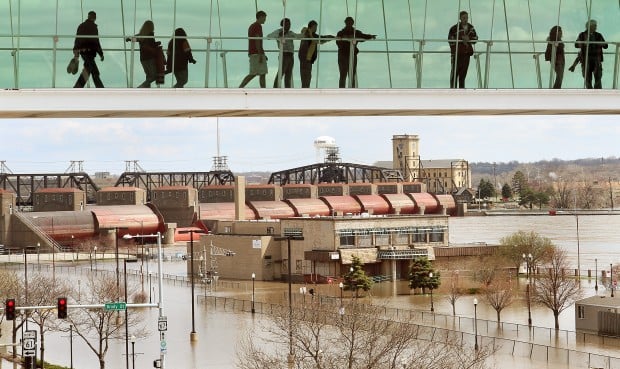 Flood gawkers stroll the skybridge for a view of the Mississippi River floodwaters flowing through Lock and Dam 15 from the Davenport riverfront, with the former Dock Restaurant surrounded again. 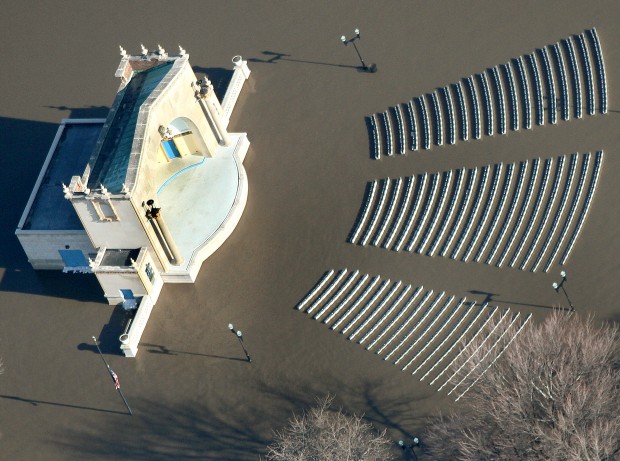 The bandshell and seats in Davenport's LeClaire Park are surrounded by floodwaters Saturday from the Mississippi River in Davenport.

The Rock and Mississippi rivers are expected to reach crests today, but the high levels will stay around for most of the week.

As the Rock River continued to rise Saturday, a levee that protects the Rock Island County hamlet of Barstow was breached, forcing the sudden evacuation of a nearby mobile home park Saturday afternoon.

"There were parts of the levee that were breached," Rock Island County Board Chairman Phil Banaszek said Saturday night. "Near the trailer park there, the water was coming over the levee, so residents were told they had a half-hour to get out.

"There were only a few of them that hadn't made preparations, but we had to get them out for their own protection and the protection of our rescue workers."

As the waters threatened the levee, workers began constructing the earthen dam about noon and still were at it at 5 p.m., he said. The Illinois Emergency Management Agency brought in some retaining walls to help.

The American Red Cross of the Quad-Cities Area set up a shelter for the Barstow residents at Eagle Ridge School in Silvis.

An official said by 4 p.m., seven people had come through the facility. The shelter, which is at 2002 Eagle Ridge Drive, Silvis, was opened at 2:30 p.m.

Kasey Kelly, a Red Cross spokeswoman, said the shelter provides housing, food and is an information hub. She said she didn't know whether the seven who had already come through the facility would spend the night.

The shelter is the second in response to flooding in the Quad-City area. The Red Cross also has opened a shelter at Immanuel Lutheran Church, 3824 Rockingham Road, Davenport, where some people from Enchanted Island were staying, Kelly said.

"That's to get the federal dollars flowing," Banaszek added.

Meteorologist Andy Ervin said the Rock River was cresting Saturday night at Como and would crest at Joslin at 19.1 feet sometime this morning, while it is expected to crest at Moline at 16.3 feet this afternoon. The expected crests are shy of a record at both Joslin and Moline, he added.  Flood stage is 12 feet at Moline.

The Mississippi River at Lock and Dam 15 in the Quad-Cities is expected to crest at 19.8 feet late tonight or early Monday, which is 4.8 feet above flood stage, Ervin said.  That would make it the seventh highest flood on record.

The Wapsipinicon River at DeWitt crested at 13.7 feet, the fourth-highest crest on record, at 7 a.m. Friday.

Ervin said Quad-City residents should get used to dealing with the water, as it will be around for a while.

Storms moving into the area Monday and Tuesday will slow the descent of the rivers, he said. There likely will not be enough rain from the two storm systems to cause a second crest, however.

"Every ditch is full, every stream is full, and as a result, every river is full. The rivers will experience a very slow descent," he said.

'We were better before': Masking debate creates rifts in Pleasant Valley schools

The Pleasant Valley School Board met Monday and quickly became a forum on the issue of masking students in the effort to mitigate the spread of COVID-19. There appeared to be little common ground.

Meet the Homecoming Queens from Assumption and Bettendorf. They're both on the honor roll. Plan to study science in college. And are living with cancer.

Man on parole charged in shooting incident at Davenport club

Seven days before completing his time on parole from the Iowa Department of Corrections, a Davenport man has been arrested in connection with …

Modern Woodmen Park is surrounded by floodwaters from the Mississippi River in Davenport during a 2013 flood which crested at 19.8 feet, nearly five feet above flood stage. A permanent berm and portable panels protect the home of the Quad-Cities River Bandits when river leaves its banks.

Flood gawkers stroll the skybridge for a view of the Mississippi River floodwaters flowing through Lock and Dam 15 from the Davenport riverfront, with the former Dock Restaurant surrounded again.

The bandshell and seats in Davenport's LeClaire Park are surrounded by floodwaters Saturday from the Mississippi River in Davenport.