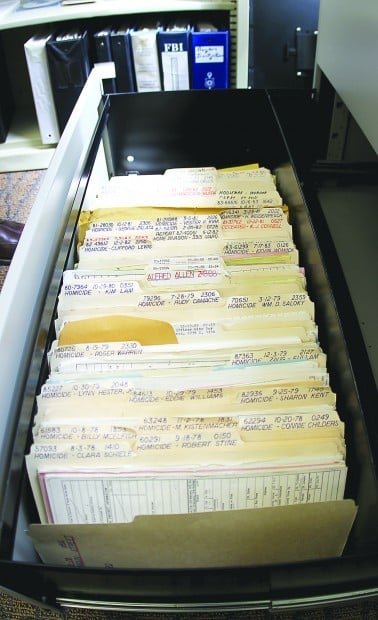 This file drawer contains many of the solved and unsolved homicides in Davenport. Thursday June 23, 2011. (Larry Fisher/QUAD-CITY TIMES) 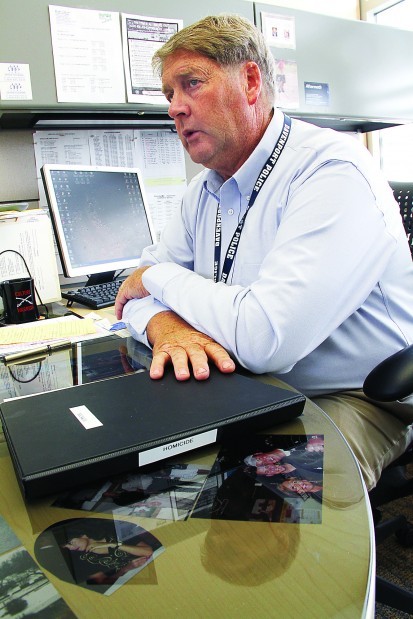 Davenport Lt. Gene Wall sits with his hand on a binder containing all the solved and unsolved homicides that took place in recent years. Thursday June 23, 2011. (Larry Fisher/QUAD-CITY TIMES) 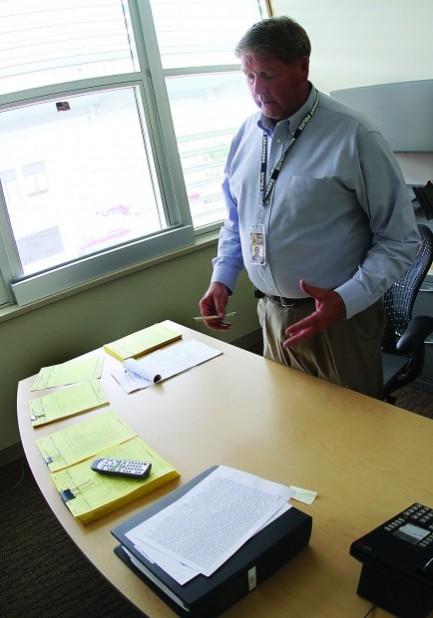 The arrest of Chad Welsh in the 2007 slaying of Angela Hennes has reopened the investigation into two Davenport police cold cases, defined that way because the killers were never brought to justice.

going to take another look at the unsolved homicides of Agnes Kennedy and Yvonne Nicholson.

Nicholson's body was found in the Mississippi River off South Concord Street on Nov. 12, 2001.

All three were strangled.

Wall said the three cases also are connected because the victims were known or convicted prostitutes.

Authorities linked DNA from the scene in 2007 and matched it to Welsh's DNA.

He was brought from a federal prison in Missouri, where he was serving time for child pornography, to the Scott County Jail to await trial on first-degree murder, a charge punishable in Iowa by life in prison without parole.

Kennedy's mother, Jean McFedries, was made aware of Welsh's arrest in the Hennes' case a month ago, she said.

"There might be something with Agnes also," she recalled of a conversation with detectives. "That was the extent of it."

McFedries has been waiting a long time for answers to her unsolved daughter's murder.

"I'm aware there's a question whether this could be the same individual," she said of Welsh. "That's all I'm aware of."

Wall declined to say if police are considering Welsh a suspect in Kennedy's homicide.

To investigate a homicide, the first 48 hours are critical, Wall said, adding the older a case gets, the "colder it gets."

About 120 people were interviewed in the first 48 hours after Kennedy's body was found.

"The stats show that within the first 48 hours, detectives have already talked to the suspect or have the name of the suspect and don't know it yet," he said.

After one year with no suspect brought to justice, a homicide is considered a cold case, Wall said.

Beginning with the murder of Charles Englehart in 1935, there have been 27 unsolved murders in Davenport.

Out of the 63 homicides since Wall took over the criminal investigation division in 1999, five are unsolved.

"All these cases are solvable with the right evidence," he said.

Wall said police chase leads in homicide cases all the time, but only 10 percent of them ever result in evidence that could one day be brought to trial.

Solving murders in which a prostitute is the victim is difficult, Wall said.

"You never know who they're with or where they were picked up at," he said.

"Agnes was not someone who stayed in one place," she said. "She was all over. She knew a lot of people. She knew too much about the streets."

McFedries hopes police find her daughter's killer, though she also has doubts.

"There's somebody out there who definitely knows what happened," she said. "They'll get drunk and talk or go to a joint and talk. Years down the road they may come out. I just don't think that will happen tomorrow."

Two weeks ago, McFedries lost another daughter, Kate, to cancer.

"Yesterday's gone, you can't go back," she said. "You can grieve, cry, jump up and down. But yesterday's gone. You've got to get on with today. That's how I'm living."

DES MOINES - Time and money are running out for the state's two-person cold case unit.

An Iowa Department of Public Safety official stopped short of saying that it has shut down after failing to get the federal funding to keep it going.

This file drawer contains many of the solved and unsolved homicides in Davenport. Thursday June 23, 2011. (Larry Fisher/QUAD-CITY TIMES)

Davenport Lt. Gene Wall sits with his hand on a binder containing all the solved and unsolved homicides that took place in recent years. Thursday June 23, 2011. (Larry Fisher/QUAD-CITY TIMES)