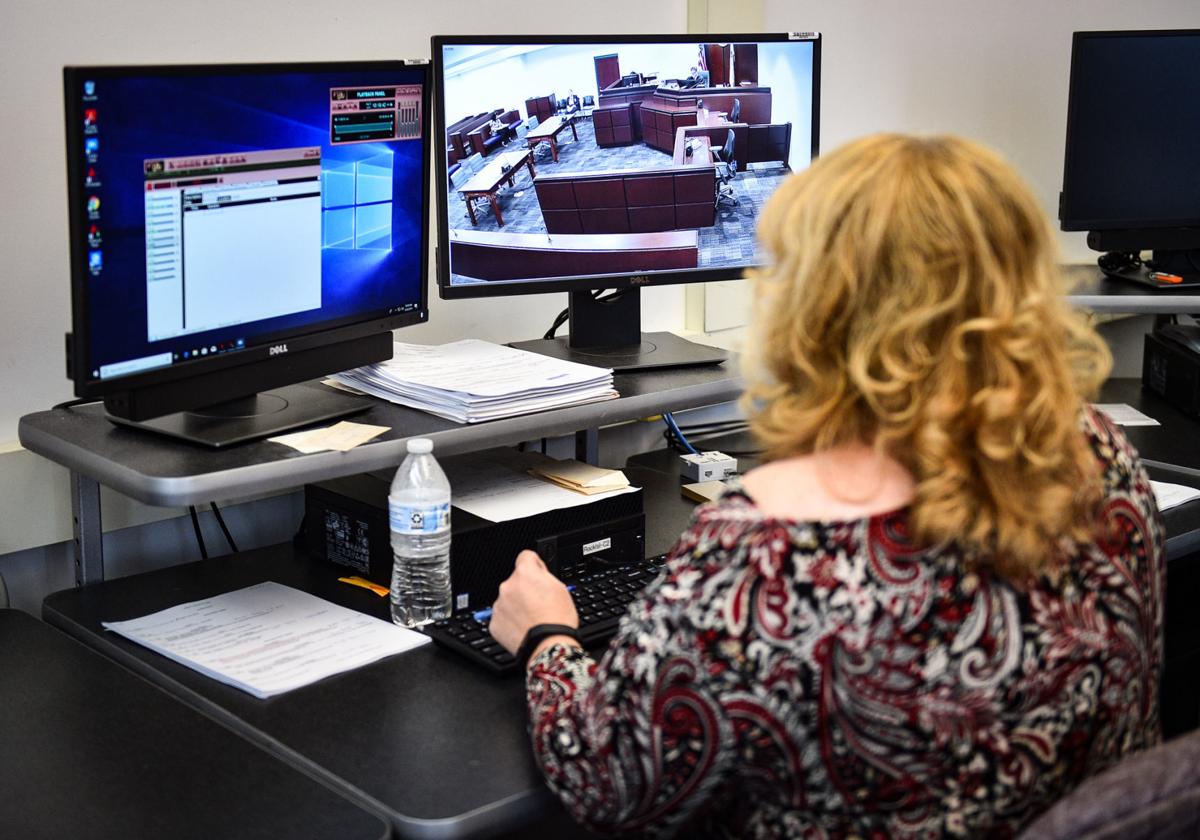 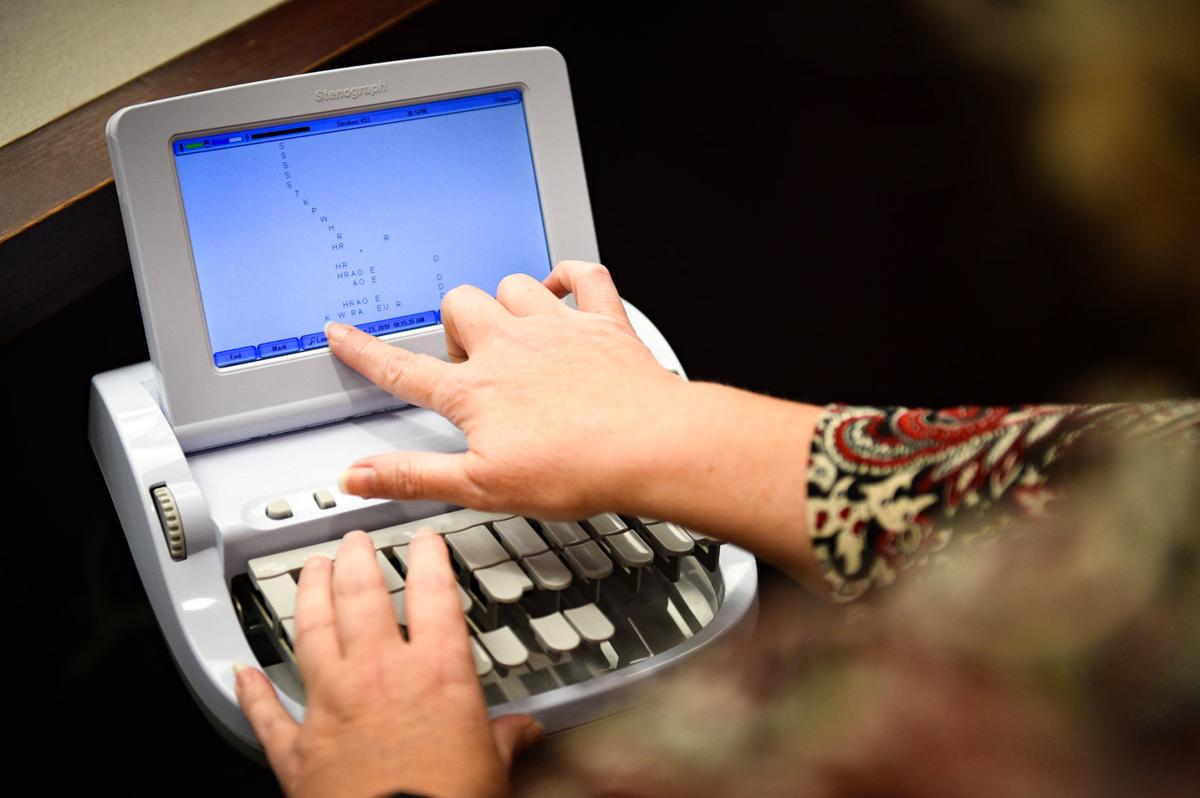 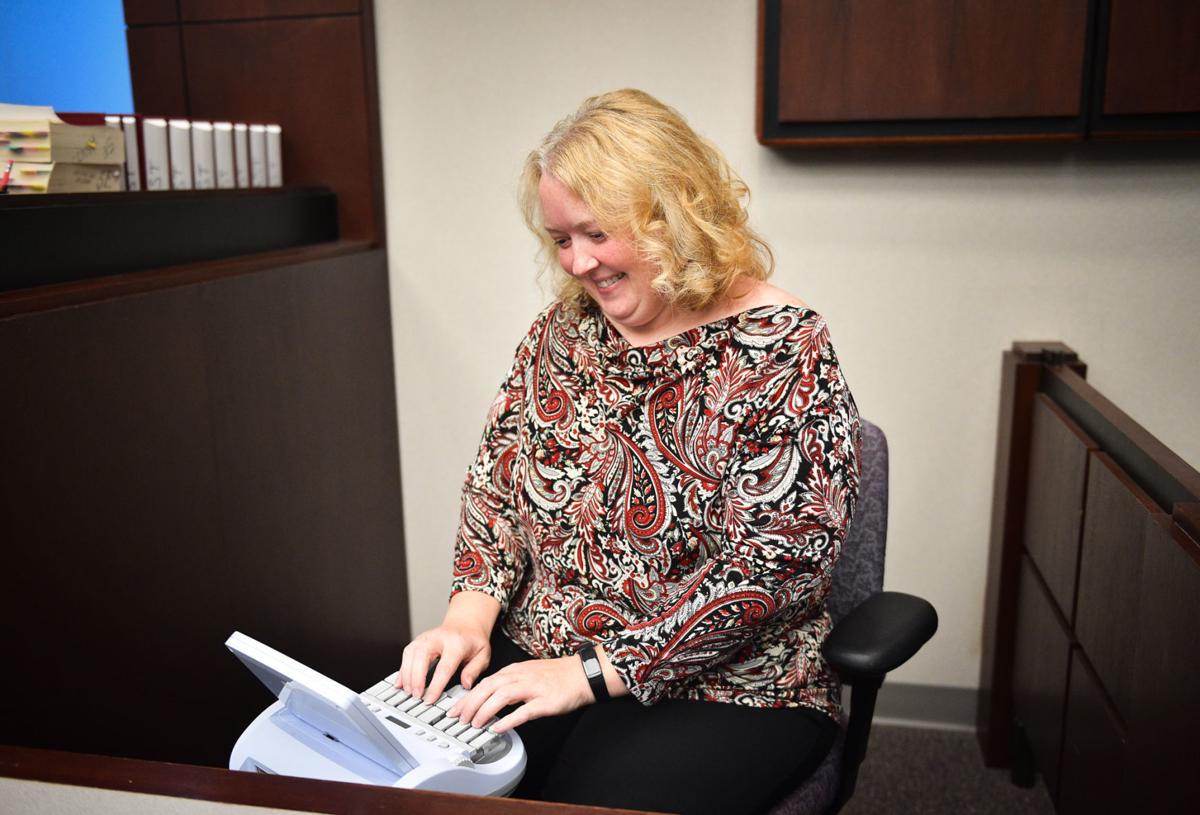 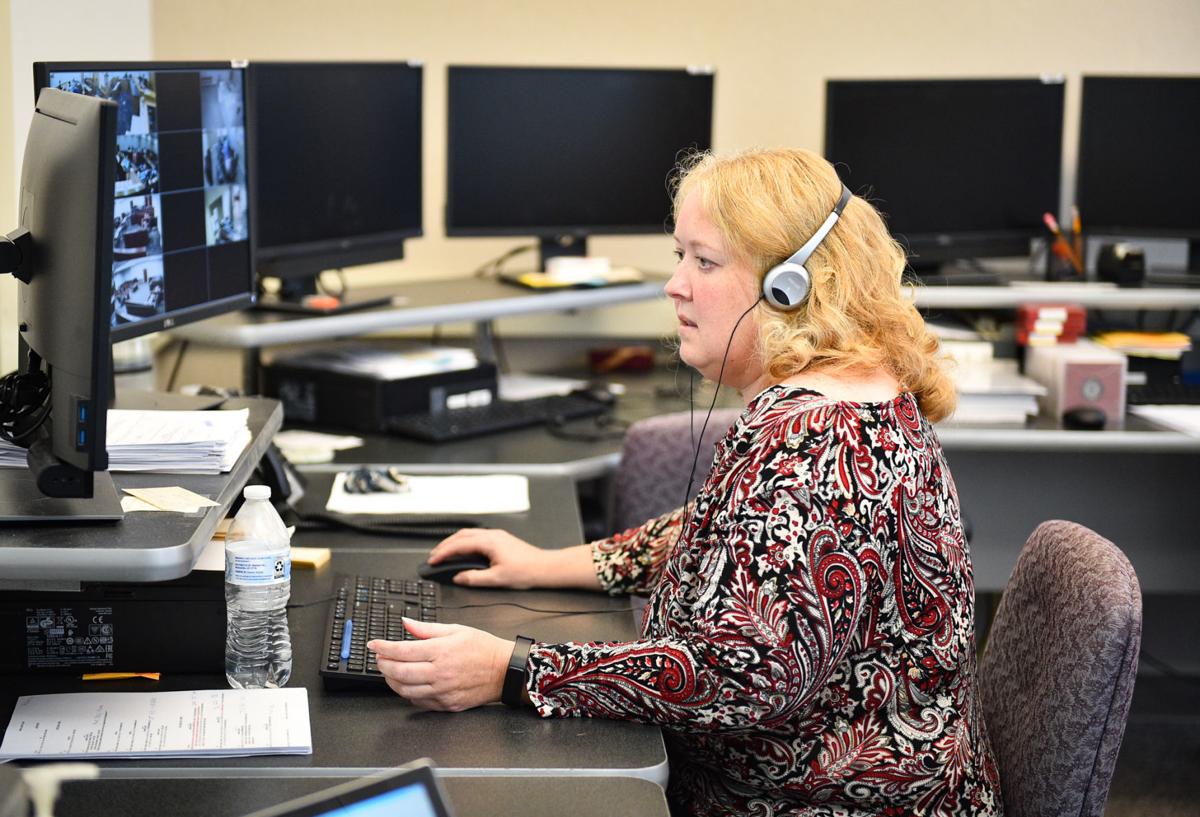 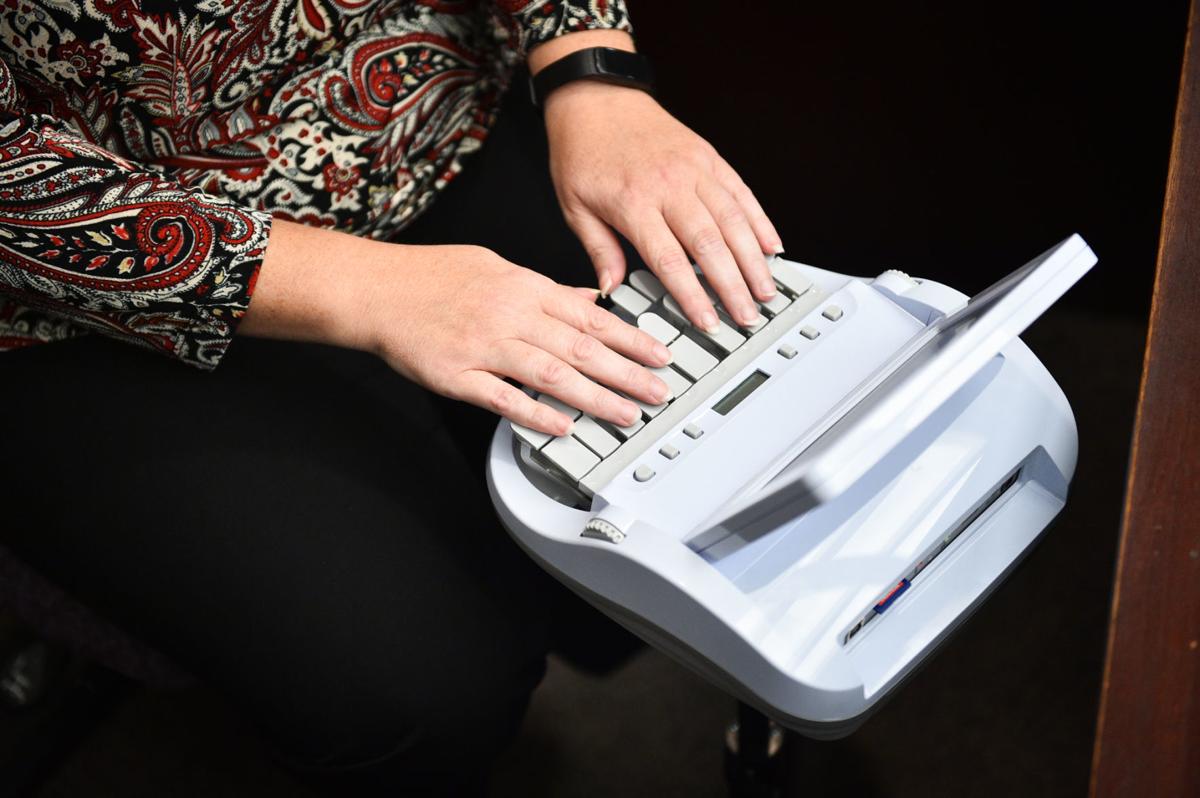 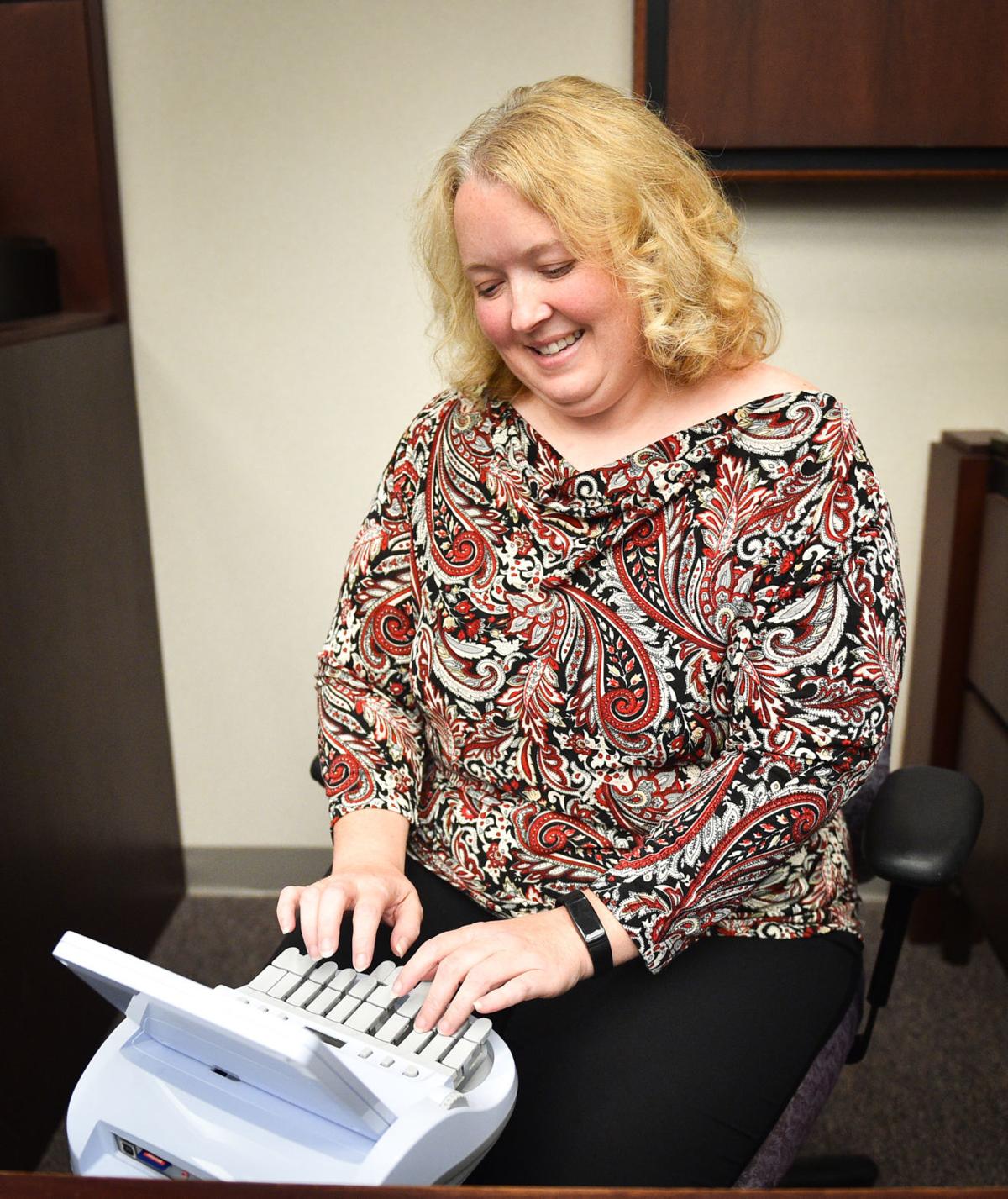 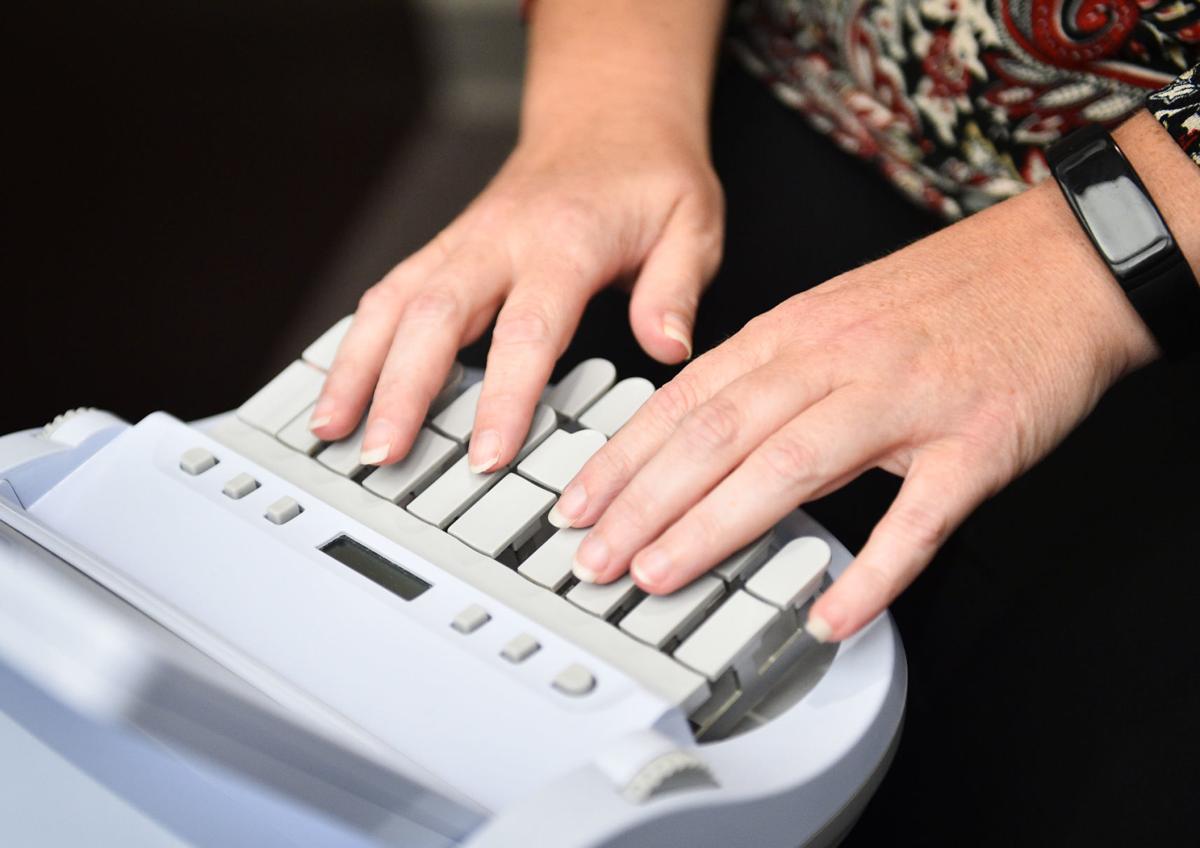 The string of letters typed on the screen of the stenography machine — y, a, i, r, d — might look like gibberish to most people, but to Becky Todd, their meaning is very clear.

“That’s ‘beyond a reasonable doubt’ for me,” the court reporting supervisor of the 14th Judicial Circuit said Friday as she sat at the machine in a Rock Island County Courtroom.

It's not uncommon to see Todd or other courtroom reporters seated next to a judge, furiously typing at a speed of at least 225 words a minute to record every single word uttered during a court proceeding. Their work will be transcribed into the official written transcript of the judicial process.

Court officials say despite advances in technology, court reporters still play a critical role in the courtroom. However, the eventual retirements of many longtime court reporters has caused and will continue to cause a shortage both locally and across the country.

The demand for court reporters is there; however, interest in the profession has dwindled over the years. Local officials say the issue is further compounded by the closing of more and more stenography schools and a misconception that technology has replaced human court reporters.

The National Court Reporter Association estimates a shortage of 5,000 court reporters throughout the United States.

“The schools are pretty much all closed,” 7th Judicial District Chief Judge Marlita Greve said at a recent meeting of the Scott County Board of Supervisors. “They just aren’t getting any younger. We have I think 30 to 40% of our court reporters statewide in the next five, six or seven years that are reaching retirement age and could retire, and we just can’t replace them at that rate. We just don’t have the ability to replace them because people aren’t going into that field.”

The shortage of court reporters has long been anticipated, said Tammy Bumgarner, director of Court Reporting Services for the State of Illinois.

“I kind of see it similar to a lot of the trades,” she said. “People were pushing college as your only alternative after getting out of high school. Court reporting is something that suffered, along with electrical construction, HVAC (heating, ventilation and air-conditioning systems), so all of those professions that may not have gone to a traditional college route to get there, they're all seeing the repercussions of that change.

“We're starting to see a trend coming back where people are talking more about you don't necessarily need college to have a successful career or make good money. We're seeing more interest.”

The starting salary for court reporters in Illinois ranges from $41,000 to $51,000, plus additional transcript income, according to the website for Court Reporting Services for the State of Illinois.

Court reporters currently are paid $4 per page for transcripts they create. The salary goes up with more experience and certifications.

Coming up short in Illinois

There were 1,766 active court reporting licenses statewide in 2018. Of those, 500 license holders work for the court system.

“We don't have a huge pool of people to pull new employees from, and the average age of our employees right now is 52 years old, so it's an aging profession,” Bumgarner said. “A lot of them are eligible for retirement right now.

"We're estimating that in the next 10 years, we're going to need 400 people to replace these people who are retiring. And it's not going to be there because there's not 400 students in court reporting right now, so (there is a) very high demand.”

The 14th Judicial Circuit, which covers Rock Island, Whiteside, Henry and Mercer counties in Illinois, has 11 court reporters and a vacancy for a 12th position, Todd said.

“It is a stretch,” Todd said of the current staffing level. “The last two years, I’m swamped. I’ve never been this busy.”

Even as a supervisor, she probably spends at least half of every workday doing court reporter work in the courtroom, Todd said.

Whiteside and Henry counties have two court reporters each, while the rest in the 14th Judicial Circuit are in Rock Island County and “float” to cover the other court reporters when they are out.

Mercer County, the smallest county in the district, has a court reporter available for court proceedings twice a week.

While courtrooms in the circuit have the capability to use digital recording, the Illinois Supreme Court mandates that courts “try our best” to put a court reporter in the courtroom in all felony and juvenile cases, Todd said.

In all other cases, such as those heard in traffic and small claims court, the hearings are recorded and later transcribed by a court reporter if needed.

“We don’t necessarily want them (court reporters) sitting in on these courtrooms that have a really low chance of getting a transcript, but that doesn’t mean those people shouldn’t have a record,” Bumgarner said.

Since the early 2000s, digital recording services have been available in Rock Island County courtrooms. Every day, a court reporter is assigned to sit in a centralized control room that monitors hearings in the various courtrooms and take notes about the parties who are present and when a witness is called to the stand.

A transcript of the audio from the hearing will be typed up if there is a request to do so by a judge or attorney, Todd said.

While the technology has been a good supplement, it doesn’t replace a live court reporter, Todd said.

“The technology is nowhere near being able to differentiate between accents. If someone is talking really softly, talking over one another, that’s something that a live body, the court reporter in the courtroom, can say ‘Hey, stop; I didn’t understand you, or you can’t talk over one another.’”

The audio recordings also don’t differentiate between speakers, she said.

Getting an official transcript ready to submit to the appellate court is not as simple as taking down every word during a court proceeding, then pushing a button and getting a transcript, Todd said.

“We have to edit; we have to punctuate,” she said. “We’ve got to distinguish between ‘there,' 'their' and 'they’re,’ and things like that. Proofreading is essential to the job.”

Todd estimated that for an eight-hour trial, it may take her a full 24 hours to proofread and get the transcript prepared.

At this point, the shortage hasn’t had a big impact on the time it takes court reporters to prepare transcripts for appeal, she said, adding that they have seven weeks to get them completed.

“I’ve got four court reporters that have over 30 years in, so I don’t know how much longer I’ll have them,” she said. “As they drop off, it’s going to be a real chore to get these transcripts completed.”

Court reporters may ask for an extension to complete a transcript, but that is "very disfavored,” Todd said.

“I know we’re not the only circuit in the state that’s down court reporters,” she said.

There currently are 174.25 court reporter positions budgeted statewide with 13.25 vacancies across the state, he said.

The 7th Judicial District, made of Scott, Cedar, Clinton, Jackson and Muscatine counties, has 16 budgeted positions. One court reporter has submitted her resignation effective Sept. 20, and the position has been posted, said Steve Davis, Iowa Judicial Branch spokesman.

He estimated that 64 court reporters across Iowa are now or will be eligible for retirement in the next five years. Six of those are in the 7th Judicial District, he said. One is expected to retire in December, Davis said.

One of the most recently posted court reporter vacancies in the 7th District took almost two years to fill, Nuccio said.

He said to help ease the pain of the shortage, the state last year began to use remote reporting that uses video conferencing technology to cut down on travel time. So far, it has been used in the 8th Judicial District, which includes Louisa County.

In Scott County, digital recording technology will be added to the juvenile courtroom on the first floor of the courthouse, Greve told the board of supervisors Aug. 20.

Recruiting people for the job

Nuccio said efforts are being made in Iowa to recruit new prospective court reporters and add more diversity to the profession by reaching out to minority communities.

To further recruitment efforts, Illinois is launching the First Steps class, a free introductory course that introduces participants to the profession.

Classes will be held around the state, including in Rock Island County, beginning in the fall.

Bumgarner said since late June, she has received more than 160 emails asking about the program. In Marion, Ill., alone, 30 people have signed up for the very first class statewide.

“Not all 30 of those will attend the class, and only a small percentage will go on to court reporting school; we know that,” she said. “But if we can just get a few from each location, we would be happy.”

Those who decide they want to pursue court reporting as a career will be hooked up with mentors to follow up with them, Bumgarner said.

“I really believe anyone who starts this class right now will have a full career regardless of technology that comes along,” she said. “You still need a human to make this work. We're not going to jump to reviewing audio or video anytime soon.”

Visit www.illinoisofficialcourtreporters.com/firststeps to sign up for the First Steps Class, an introduction to court reporting.

US: Sirens blare as tornado warning issued for Chicago area