A Rock Island man accused in the Oct. 17 shooting death of 35-year-old Samual Wires outside the Déjà Vu Showgirls strip club in Davenport has been extradited to Scott County from Rock Island County.

Lance M. Johnson Jr., 28, was booked into the Scott County Jail at 6:26 p.m. Wednesday on charges of first-degree murder and being a felon in possession of a firearm.

Johnson made a first appearance on the charges Thursday morning in Scott County District Court. Magistrate Peter Gierut scheduled a preliminary hearing in the case for Jan. 21.

Johnson was being held Thursday night on a cash-only bond of $1 million.

On Sunday, Oct. 17, at 2:58 a.m., officers were sent to Déjà Vu Showgirls, 5220 Grand Ave., for a disturbance. Responding officers heard gunshots and found one gunshot victim when they arrived on scene.

The victim, Wires, of Davenport, was taken to Genesis Medical Center East, Davenport, where he was pronounced dead.

Johnson is currently serving a term of two years on conditional discharge after being sentenced Jan. 28, 2021, in Rock Island County Circuit Court for possession of a controlled substance.

When he was 17, Johnson and another man were charged in connection with the Oct. 20, 2010, armed robbery of the Kwik Shop at Locust and Marquette streets in Davenport. Johnson pleaded guilty to a charge of first-degree theft, a Class C felony under Iowa law that carries a prison sentence of 10 years.

During a sentencing hearing in Scott County District Court on Sept. 8, 2011, District Judge Mark Cleve sentenced Johnson to 10 years in prison. The sentence was to run concurrent with two felony cases Johnson was involved in at the time in Rock Island County.

According to Iowa Department of Corrections electronic records, Johnson was placed on parole on Oct. 10, 2014, and he was released from parole on March 3, 2016.

Rock Island Police have identified two suspects of an armed robbery that left one of the suspects dead and another wounded Tuesday.

A Davenport man released from the Iowa Department of Corrections on Oct. 13 has been arrested in connection with a shooting incident that occu… 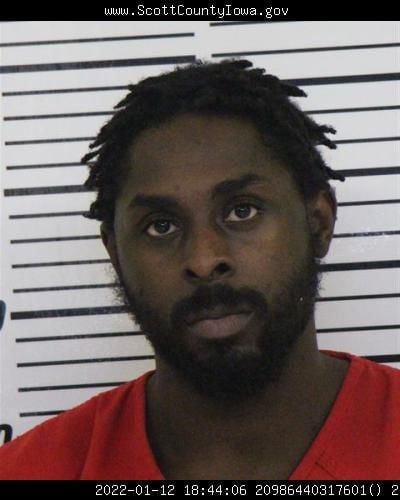