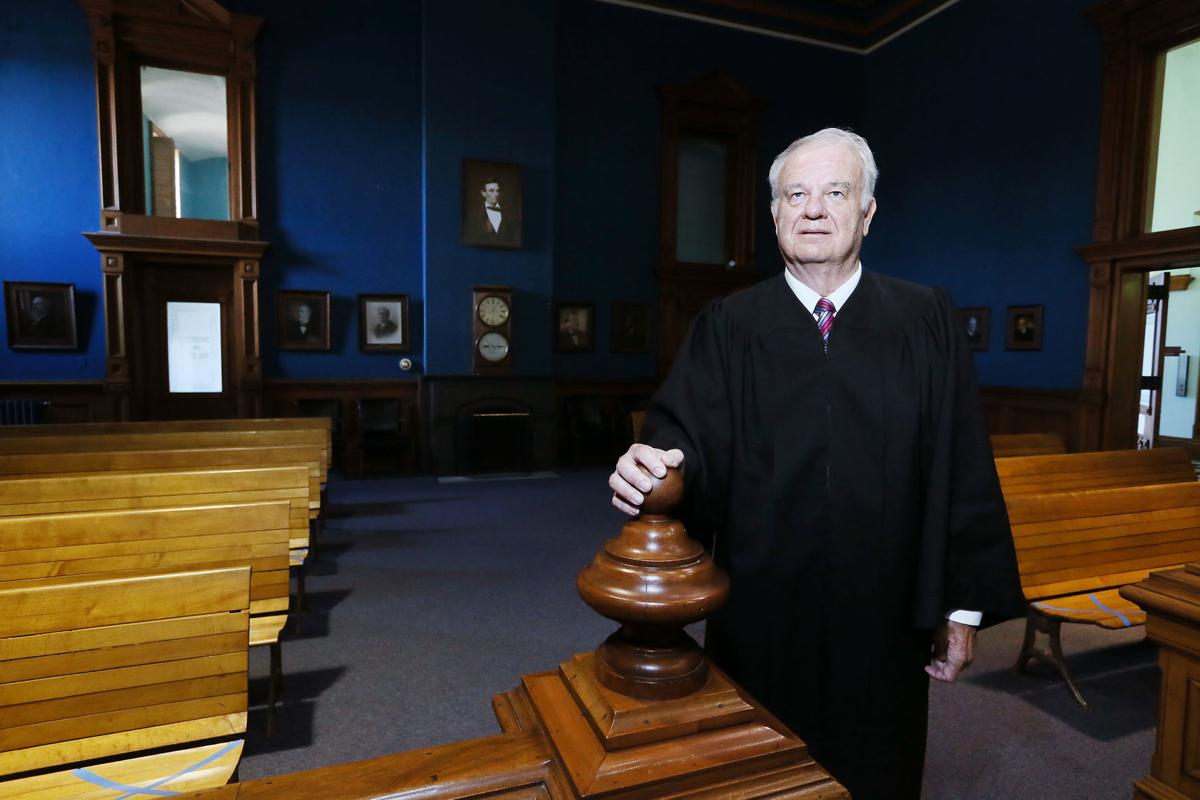 Judge Jeffrey O'Connor stands in the Henry County Courthouse on Thursday, July 23, 2020, in Cambridge, Illinois. O'Connor is retiring after 38 1/2 years as a judge. He was chief judge of the 14th judicial circuit from 1990 to 2014. 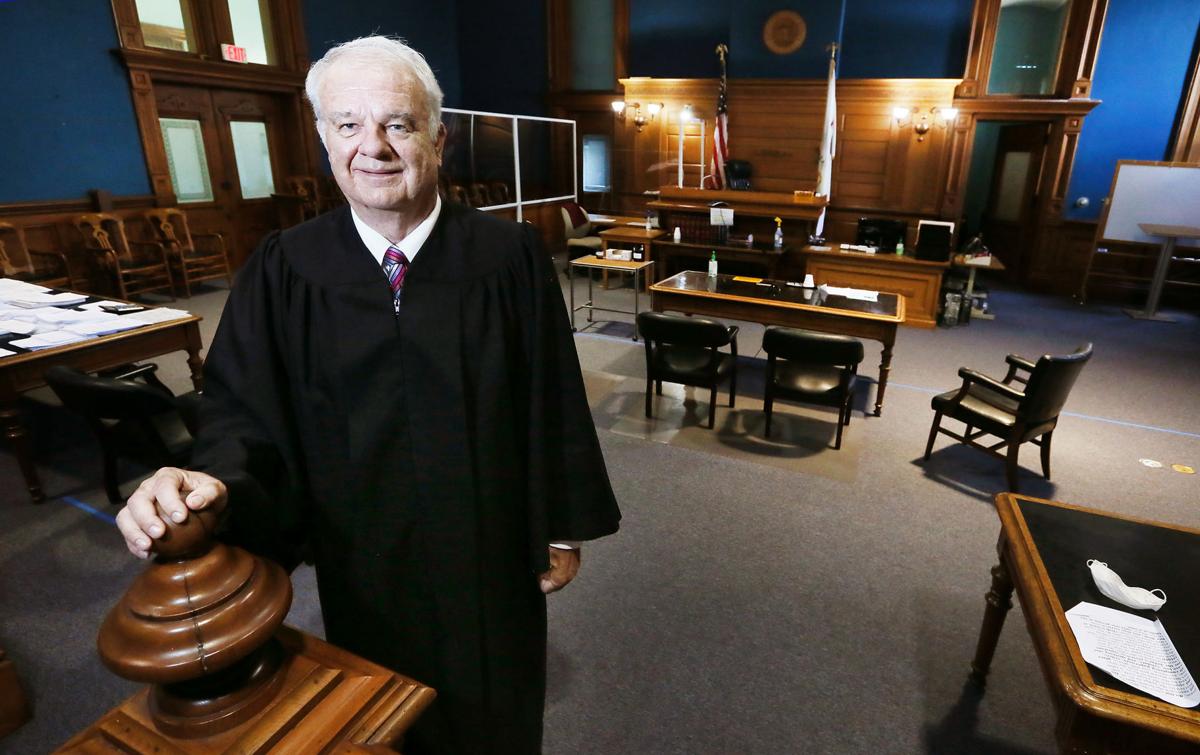 Judge Jeffrey O'Connor stands in the Henry County Courthouse on Thursday in Cambridge, Ill. O'Connor is retiring after 38½ years as a judge. He was chief judge of the 14th judicial circuit from 1990 to 2014.

CAMBRIDGE — After 38½ years on the bench, Judge Jeffrey O'Connor will retire Friday, July 31.

At sentencing, when judges have the final say, he has warned many a defendant they need to change their circle of friends to break the cycle of crime.

Sometimes he points out the defendant's so-called friends aren't there for support in court. If family members are present, O'Connor tells them “in spite of all the heartbreak you've caused, family are the ones that are there.”

Sometimes, advice is serendipitous. O'Connor recalled a hearing for a juvenile years ago. The boy was driving his parents "to distraction." The disposition was winding down and the boy was “popping off” with a smug attitude, he said. For some reason the judge asked him when he last told his mother he loved her. “I just turned to him and I told him, 'Now's your chance.'”

The boy did so. “She died in a car accident two days later,” O'Connor said. “I don't know why I said that. That's the only time I've ever said that.”

Another role of the chief judge is to work with county boards on any deficiencies or inadequacies of the facilities, which he said led to tearing down the old Henry County Jail and building a new courthouse annex.

He remembers standing in the third-floor county board room in the old courthouse and talking to the county board.

“They were very good,” he said. “Rock Island was much more resistant. Of course it helps, they knew I was not blowing smoke because they get reports from the Illinois Department of Corrections. The question was what to do and how much, but I think the county board around the year 2000 — there is a plaque downstairs listing their names — all the board members were a fabulous group. They did it right. I commend them all for that.”

County board member Ned Richardson was head of the building commission then and recalled O'Connor explained that just adding on to the jail wouldn't solve the space problems. More courtroom space was also needed.

"He had some insight there that helped us to focus," Richardson said. "He was very helpful, quite honestly. If he had not been on board, we would not have thought of some of that. And he was interested and paid attention to what was going on all the way through."

Richardson noted that O'Connor had started things toward getting a new courthouse in Rock Island County, as well.

Traffic cases were held in the same county board courtroom at the time. “It was chaos. People were standing around — it was unbelievable!”

“At 5:30 or 6 a.m. there would be calls that someone has a sick child — this, that or the other thing. She always took the schedule home with her, and she would make adjustments and make the phone calls to make that day work,” he said. She also handled last-minute changes in the other counties in the circuit, getting a court reporter or a judge out to Whiteside, Henry or Mercer counties when needed at the last minute.

To show his appreciation he once ran into Chicago Bears coach Mike Ditka in Chicago and had him autograph a picture “to the best court administrator in Illinois” for Bluedorn.

He maintained his own court schedule while chief judge, hearing cases every day.

Seeing the impact of drugs

The impact of drugs is a big part of court work.

“You know that lives are going to be destroyed by drugs,” he said. “There's a lapse there in the thought process, which methamphetamine will do to you,” he said. “That's the Number One crime in Henry County — and Rock Island County and Mercer County and Whiteside County. Methamphetamine kills brain cells; you don't recover from it. There's an organic loss in your brain.

“Chances of relapse are higher and why? Because of the people you hang around with, the places you go where you know it's available,” he said.

He said he didn't understand why “mules” would risk six to 30 years in prison or more to gain $5,000 for driving across the country with drugs.

“The guy who's set it up has lost nothing except he lost his crop. That's all he's out,” he noted.

There was one such case in 2017 in which the defendant had a special-needs disabled son whose monthly expenses were mounting. O'Connor said at sentencing it was the one time in 45 years overall and 36 on the bench that he disagreed with the legislature over the 12-year mandatory minimum sentence; he would have preferred to give probation and some form of prison time.

Faith in the system

“It's been 38 years and I can count the number of jury outcomes on one hand that I didn't agree with,” he said.

A judge hopes he's given the people who come before him something to think about, as well. It's an unknown, for the most part.

“I've had them come to me later and say, 'You changed my life,'” he said. “Not very many of those. Most go right back to where they started.

“It's rewarding. I've been very fortunate,” he said. “If you can save somebody, it's well worth it.”

Judge Terry Patton compared keeping a group of judges happy to herding cats, but said O'Connor was able to do it as chief judge.

“Judges can be a little independent and strong-willed, and he was chief judge until he decided he was ready to step down. He could have kept the chief judgeship if he wanted to,” Patton said. “There aren't many judges who can do that.”

O'Connor grew up in Kewanee, at one point living in a downstairs apartment near Prospect and Main streets. His father, William O'Connor, and his grandfather, Martin O'Connor, were also Henry County state's attorneys, and his father was also an associate judge.

O'Connor went to the University of Notre Dame and then John Marshall law school in Chicago, but knew he'd get better experience in Henry County than if he stayed in Chicago. So instead of reading depositions and doing “low work” for a Chicago firm, he returned home.

“I got more trial experience coming here in six months than I probably would have in five years in Chicago,” he reflected.

O'Connor's family consists of a son and daughter-in-law, Dan and Autumn; granddaughter, Cadence May; daughter and son-in-law, Erin and Mark Pinter; and grandsons, Rex, Landon and Connor. All live in Chandler, Arizona.

O'Connor's next “case” is up in the air.

“It's a project under consideration,” he said. “I'll find something.”

Cops and CRC issued accusatory statements Thursday ahead of a community discussion on police reform.

Davenport Police are investigating a pair of weekend robberies that targeted local businesses.

Should Davenport have police stationed in its schools? A forum will discuss the issue Aug. 18.

Hope Luce was the driving force behind June 4’s protest of police violence in Vander Veer Park in Davenport.

Judge Jeffrey O'Connor stands in the Henry County Courthouse on Thursday, July 23, 2020, in Cambridge, Illinois. O'Connor is retiring after 38 1/2 years as a judge. He was chief judge of the 14th judicial circuit from 1990 to 2014.

Judge Jeffrey O'Connor stands in the Henry County Courthouse on Thursday in Cambridge, Ill. O'Connor is retiring after 38½ years as a judge. He was chief judge of the 14th judicial circuit from 1990 to 2014.