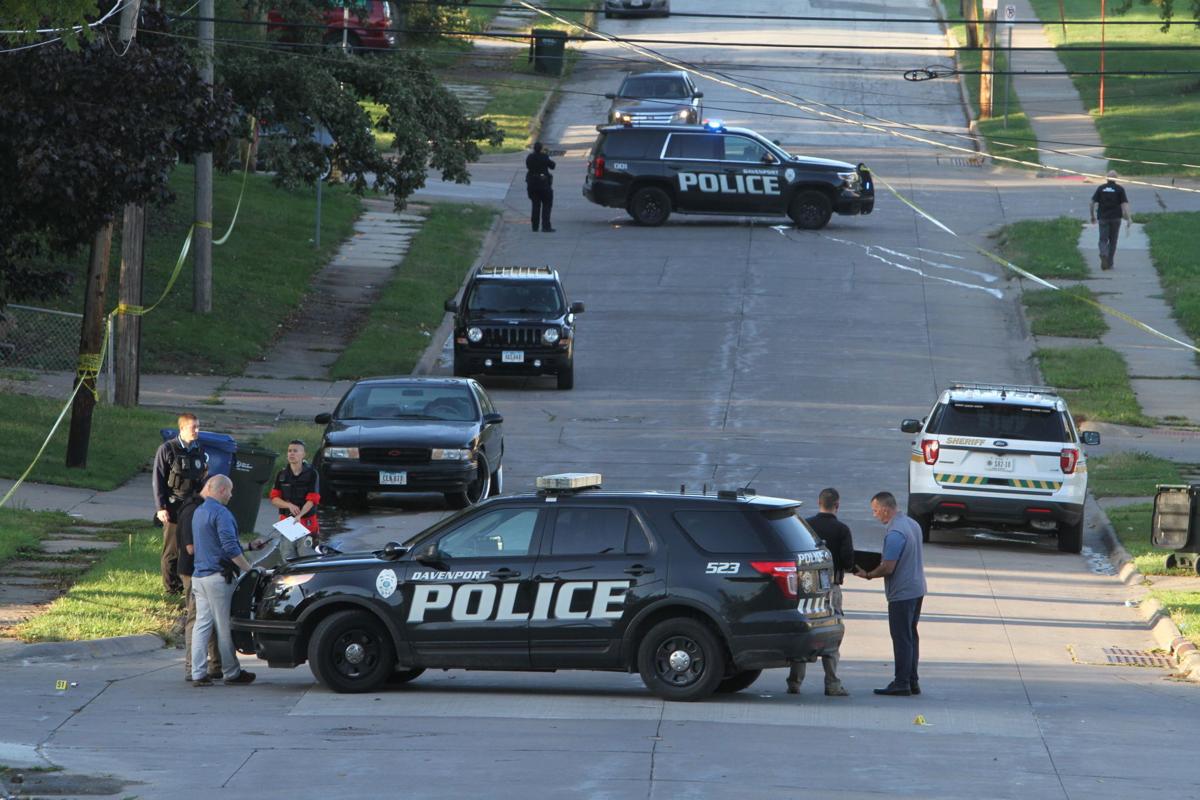 The Iowa Division of Criminal Investigation investigates an officer-involved shooting that occurred Wednesday on Iowa Street at 8 1/2 Street. One man, Bobby Klum, 37, was killed.

A police shield, a firearm and other evidence lies on Iowa Street near East 8 1/2 Street on Wednesday after an officer-involved shooting in Davenport. 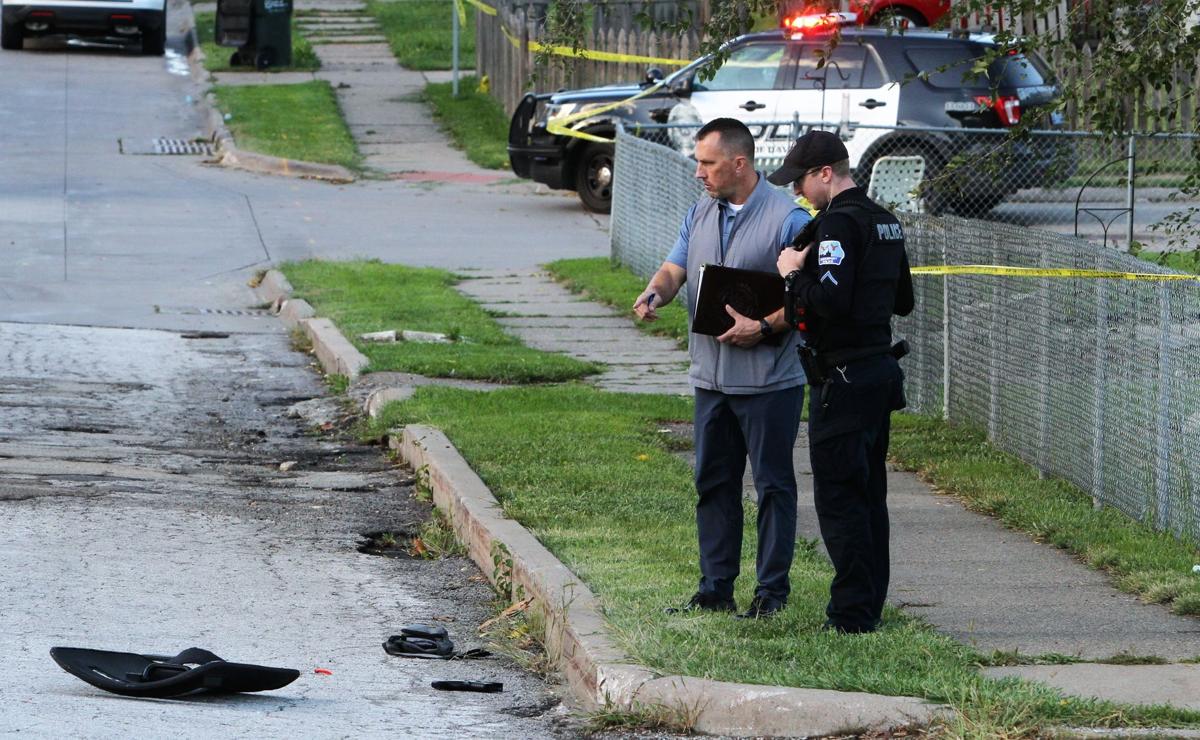 An agent with the Iowa Division of Criminal Investigation looks over evidence along Davenport's Iowa Street near East 8 1/2 Street on Wednesday after an officer involved shooting.

The man shot by a Davenport police officer Wednesday afternoon has died, according to Iowa Department of Public Safety.

Bobby Klum, 37, was reportedly walking near the intersection of 8th and Iowa streets with a handgun pointed at his head. Police responded to the area around 3:30 p.m. Wednesday and tried to defuse the situation, according to a news release from the Iowa Department of Public Safety.

The Department of Public Safety said Klum "refused to comply with officers’ commands. Officers discharged two less-lethal rounds with allegedly no effect. One police officer discharged his duty firearm, striking the subject in the mid-torso."

Klum was transported to Genesis East Hospital where he was pronounced dead.

An autopsy has been scheduled at the Iowa Office of the State Medical Examiner. An investigation is being conducted by the Iowa Division of Criminal Investigation. The name of the officer will not be released until after being interviewed by the DCI.

Klum was on parole for a sex offender registration conviction from 2017, and would have remained on parole until Jan. 20, 2024. He was sentenced in that case as a repeat offender, with convictions from Scott and Rock Island counties. At sentencing, Scott County District Judge John Telleen gave Klum the maximum term in prison of 15 years, with at least three years to serve before parole could be granted. Klum was given credit for time served in the Scott County Jail awaiting trial and sentencing, Telleen also ordered Klum to remain on the sex offender registry for another 10 years.

Since 2013, Klum had served time for third-degree burglary, second-degree theft, conspiracy to commit a felony, and violation of Iowa’s sex offender registration statutes. He had been convicted at least four times for aggravated misdemeanor charges of driving while barred — once in 2019, and three times in 2020.

Klum was on the sex offender registry for a 2007 conviction in Rock Island County of aggravated criminal sexual abuse of a girl between the ages of 13-16. The charge is a Class 2 felony under Illinois law that can carry a prison sentence of three to seven years.

Klum also had felony convictions in Rock Island County of obstructing justice in 2009, and felon in possession of a firearm in 2016.

He was never sentenced to prison for any of his felony convictions in Illinois.

He had two court cases currently pending in Scott County.

On Aug. 17, Klum was again charged with violating Iowa’s sex offender registry statutes. He faced three counts of violating the registration statutes, with the offense dates being May 14, June 16 and Aug. 17. Each is a Class D felony under Iowa law with a prison sentence of five years. He also faced an enhanced penalty for being a repeat offender. A pre-trial conference was to be held Jan 7.

Some claims have been dropped in the $5 million wrongful death lawsuit against a Scott County Sheriff's deputy and the Scott County Attorney on behalf of man killed in 2018 after attempting to flee a traffic stop.

A Davenport woman charged in a fatal hit-and-run in Davenport in May has pleaded guilty and is scheduled to be sentenced in January.

The Blue Grass police department is getting its third squad car, thanks to the help of community donors, a government grant and some drug forfeiture money.

An East Moline man was sentenced in Iowa Wednesday to 15 years in federal prison for conspiracy to distribute 50 grams or more of methamphetamine.

A Davenport man was sentenced Wednesday to five years and ten months in federal prison for a charge of felon in possession of a firearm.

The Davenport police officer who shot and killed a man Wednesday has been identified by the Iowa Department of Public Safety.

The Iowa Division of Criminal Investigation investigates an officer-involved shooting that occurred Wednesday on Iowa Street at 8 1/2 Street. One man, Bobby Klum, 37, was killed.

A police shield, a firearm and other evidence lies on Iowa Street near East 8 1/2 Street on Wednesday after an officer-involved shooting in Davenport.

An agent with the Iowa Division of Criminal Investigation looks over evidence along Davenport's Iowa Street near East 8 1/2 Street on Wednesday after an officer involved shooting. 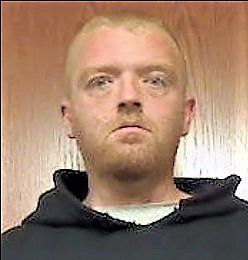