Inmate transfers since then have been unpredictable, Bustos said. Before the pandemic, the Rock Island County jail transferred inmates to state prisons every Thursday, but recently they've been able to make transfers only once or twice every couple of months, and Bustos said taxpayers are footing the bill for the extra time inmates spend in the county jail.

"The Department of Corrections is still collecting their money to house these prisoners, but they're not housing them, and they're not passing that same cost down to the local sheriff's offices," Bustos said.

The Rock Island County Jail typically charges $55 a day to house an inmate for another county and for the DOC. Based on that price, Bustos said the DOC currently owes the county $493,340.

As of Thursday evening, the Illinois Department of Corrections did not respond to a request for comment.

Bustos said the jail currently had 14 inmates who needed to be transferred. The last time they were able to transfer inmates was about a week ago, and before that it had been at least six weeks.

"Many sheriff's offices and people, we've spoken with our legislators about this problem. It's not that the state's not aware. It's just that for some reason, there is no communication about what to do," Bustos said.

The Illinois Sheriff's Association sent a letter to the DOC on June 17 asking it to address the situation. Jim Kaitschuk, executive director of the ISA, said there had been some communication since the letter was sent. 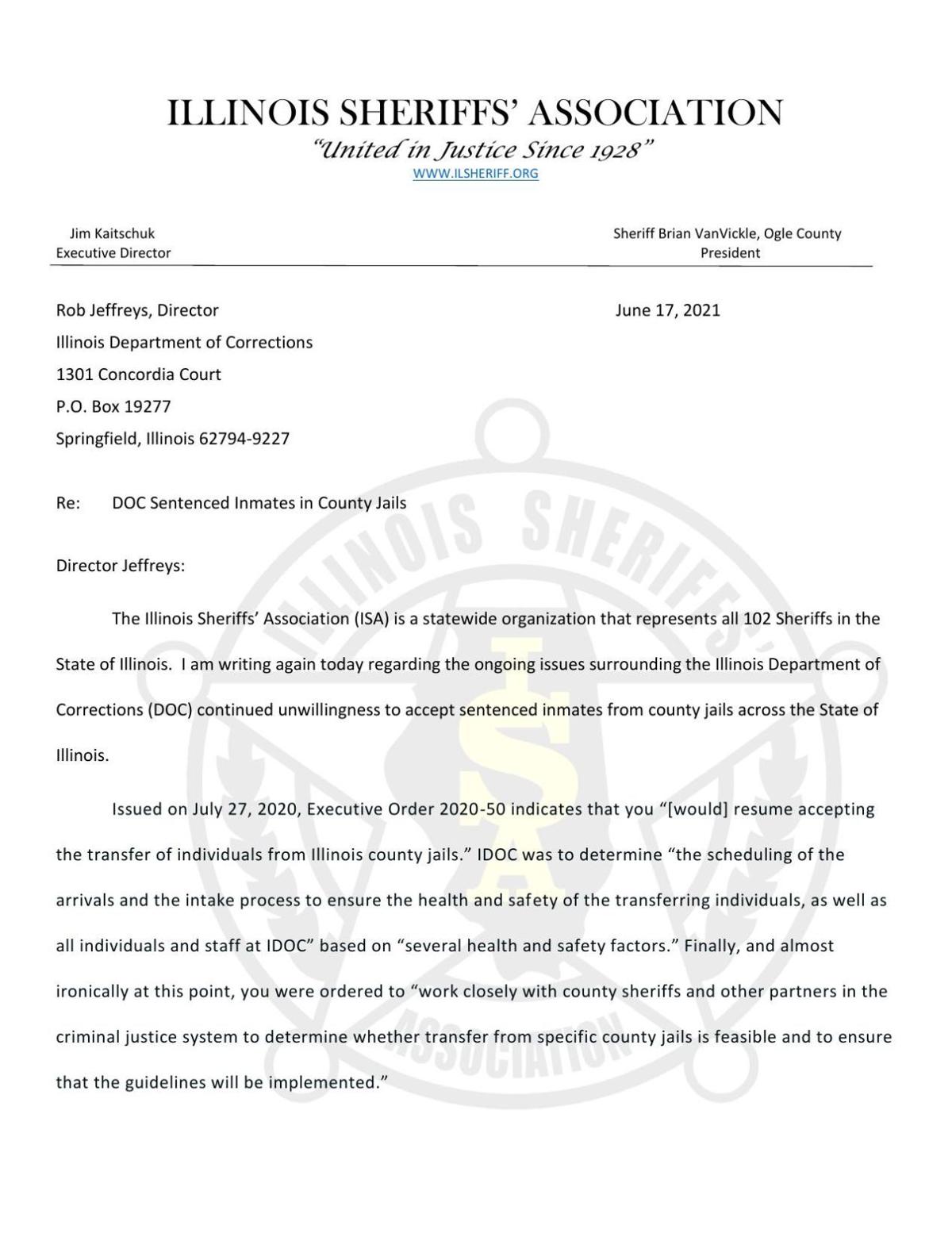 Kaitschuk said the DOC emailed him on July 2, the same day the governor reissued the executive order stating the prisons should reopen. The DOC told Kaitschuk it would make some changes to how they received inmates, including allowing two inmates per cell where they previously had allowed only one.

Kaitschuk said the DOC also reached out earlier this week and asked to complete a survey of all the jails in the state to find out how many inmate days each jail has had since the pandemic began, meaning it would count each day that each inmate who was supposed to be in the DOC has been in the jails. The DOC received $25 million for fiscal year 2022 as part of the American Rescue Plan Act to put toward paying back county jails. Kaitschuk said they wanted to know how many inmate days each jail had had so they could divide that $25 million evenly among the counties.

In the past, different counties have charged different amounts per day to house inmates, depending on which part of the state they're in and what services they have. Kaitschuk said he's worried the $25 million wouldn't be enough and that dividing the money evenly between counties could set a bad precedent.

"So what they’re trying to figure out on a basic basis is, ‘OK, so if we have $25 million, and we have 500,000 inmate days, you divide one by the other and you’ll figure out how much we can pay the counties for housing our inmates during that time.’ My point to them is, that doesn’t necessarily mean that that covers the cost of the jail, nor does that mean that we’re agreeing to that rate in the future," Kaitschuk said.

Kaitschuk said he also hadn't received any indication as to when inmate transfers might return to what they were before the pandemic. There hasn't been any sort of set schedule for transfers during the pandemic. Bustos said the DOC usually reached out to the the sheriff's office with three or four days of warning to let them know when they could bring inmates and how many they could bring.

"There's really been no specific formula that I've seen from the department of corrections about why they take inmates from certain counties but not from others," Kaitschuk said. "That should be a relatively simple request — 'How do you make the decisions that you're making on who you're taking today?' — but I can't seem to get an answer on that."

Bustos said the risk of transferring COVID-19 from the jails to the prisons was significantly decreased, and in the case of Rock Island County, it's zero.

"Everyone in the jail right now is COVID free," Bustos said.

WH on SCOTUS and race in college admissions case

WH 'refining plans for all scenarios' in Ukraine

WH 'refining plans for all scenarios' in Ukraine

Bond was reduced Tuesday for a Moline woman charged with vehicular homicide in relation to a fatal September crash in Davenport.Jasmin A. Matt…

Two arrested in relation to Monday shooting in Rock Island

Two men have been arrested in relation to a shooting Monday afternoon in Rock Island.

A Davenport man was shot and killed Friday. His name was released by Davenport police Tuesday.

A Moline woman accused of killing her 15-year-old son had her bond amount reduced Friday from $2 million to $1 million.

'A senseless crime': Davenport woman sentenced to 10 years in prison for fatal shooting in a Chuck E. Cheese

A Davenport woman was sentenced to 10 years in prison Friday for fatally shooting another woman in a Chuck E. Cheese.

A Rock Island man was arrested Tuesday for allegedly hitting a one-year-old child with a dog leash.

Quad-Cities fire departments say hiring has become more difficult during recent years, because fewer people are applying to be firefighters.