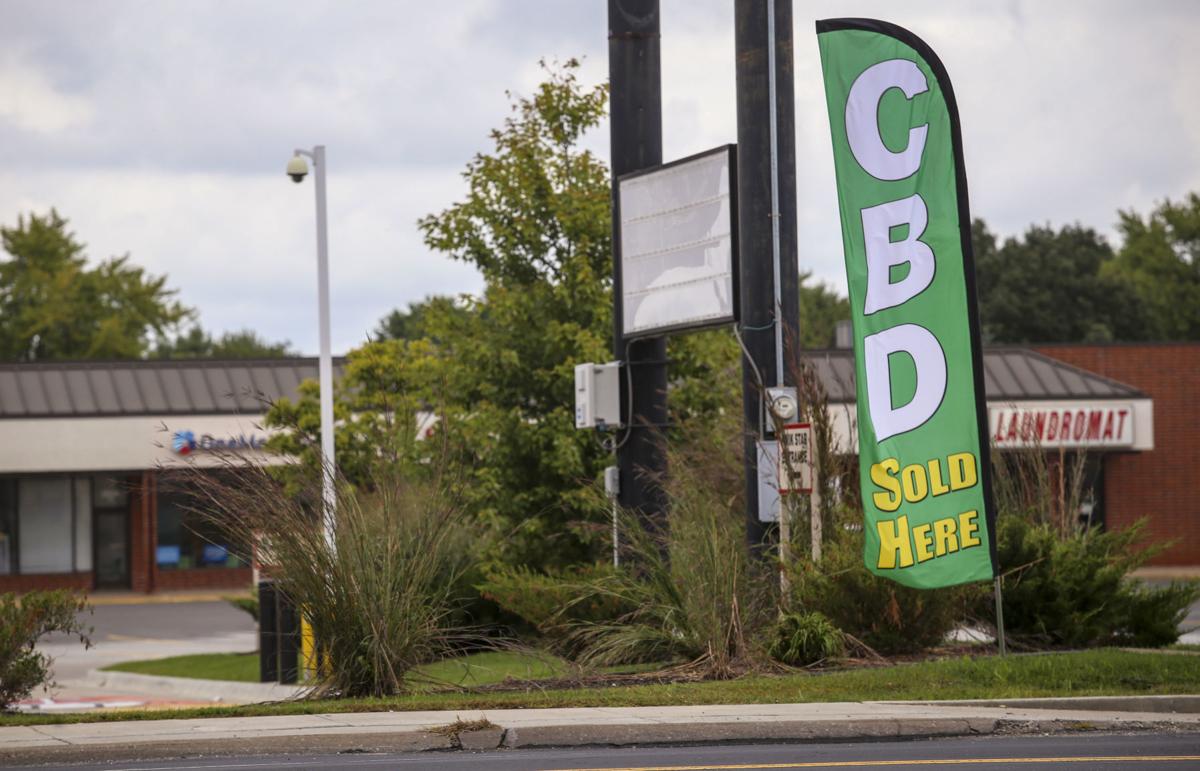 A sign advertises CBD sales along West Locust Street, outside Your CBD Store, 2824 W. Locust St., Davenport. The signs are common sights in the Iowa Quad-Cities, even though sales of CBD are illegal. 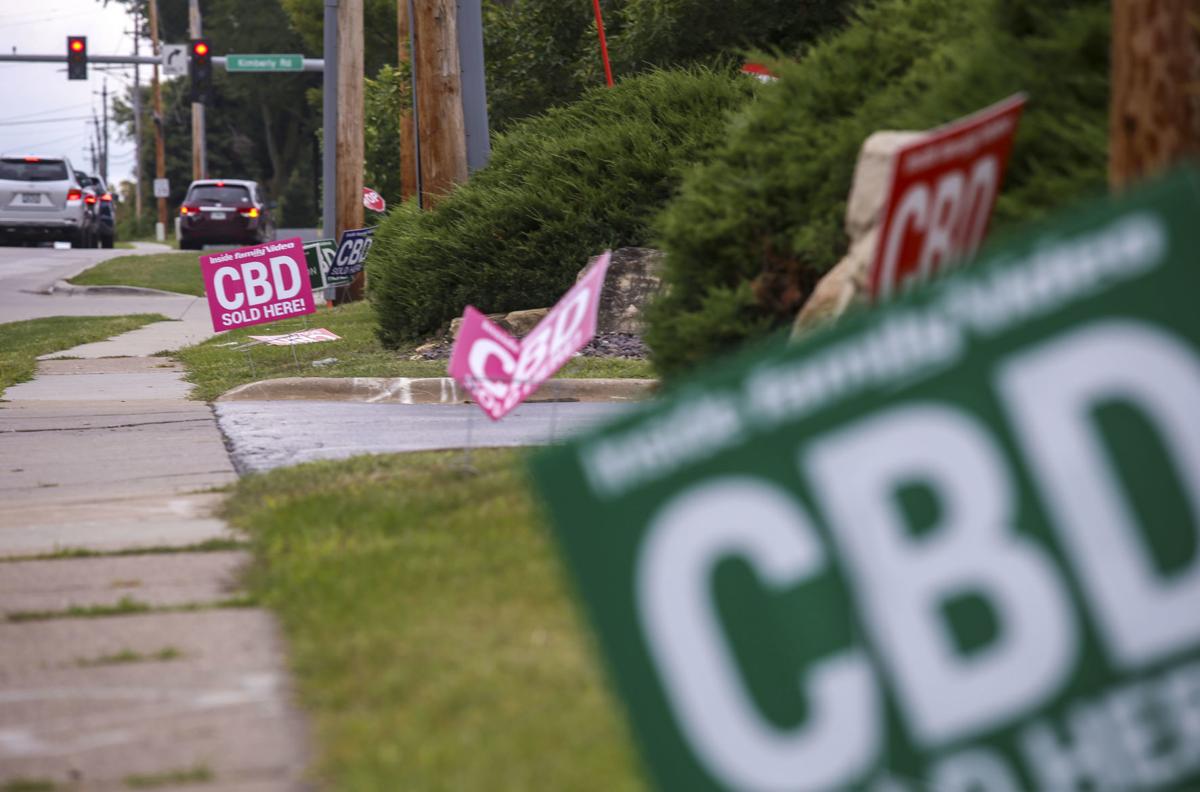 Signs advertise CBD sales at Family Video, 3833 N. Division St., Davenport. While CBD sales are not legal in Iowa, enforcement is not seen as a priority to police and the county attorney. 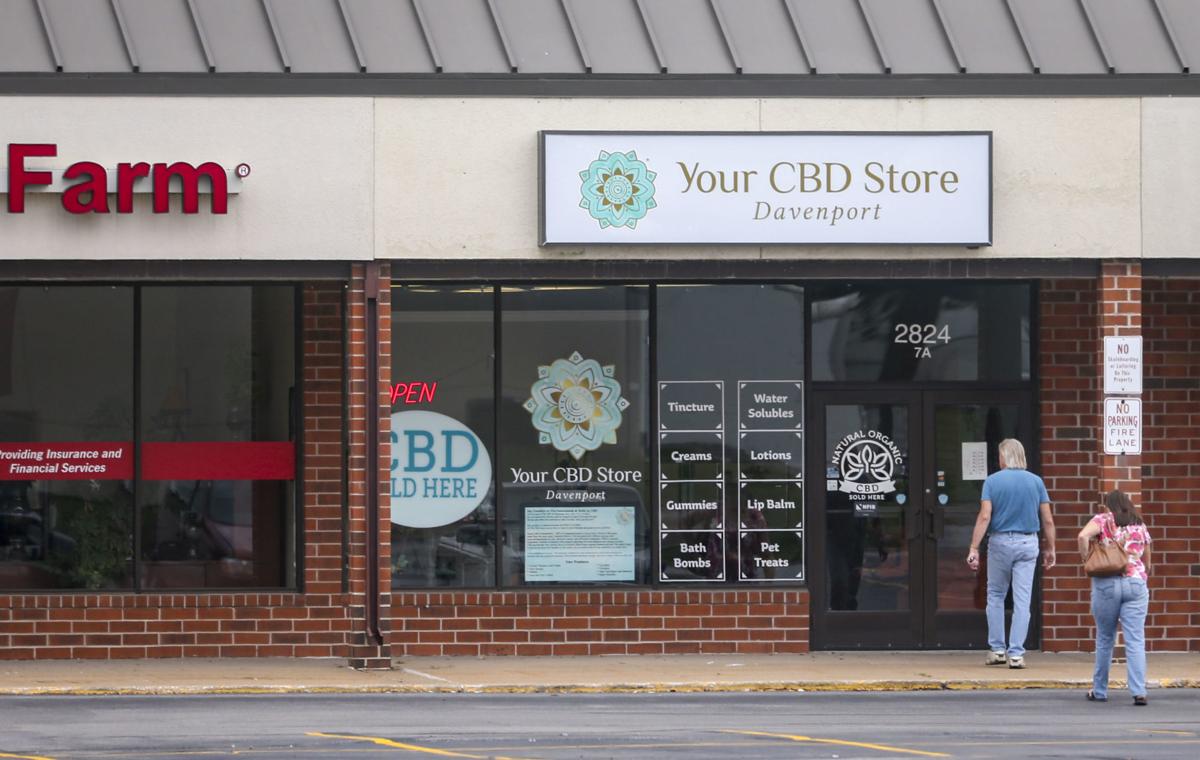 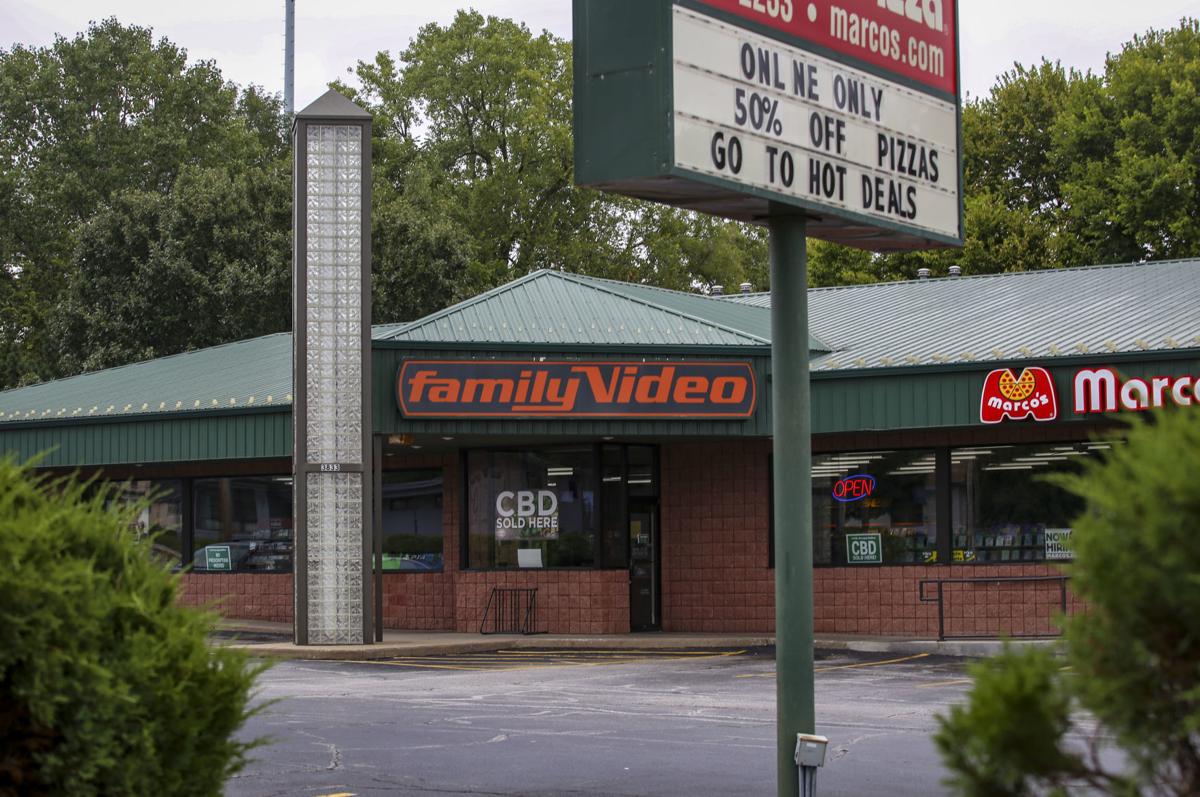 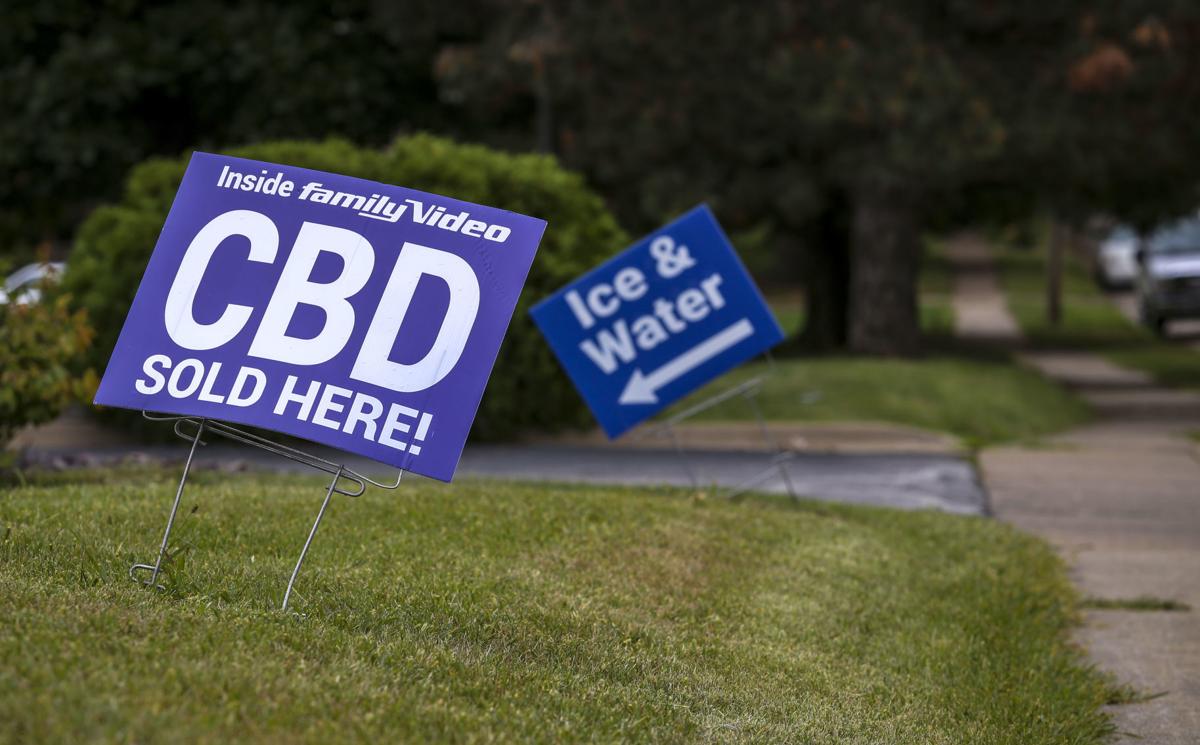 Drive down any Davenport street and chances are you'll see the letters CBD.

They stand for Cannabidiol, a compound found in cannabis and hemp that has become increasingly popular for its alleged therapeutic, nonpsychoactive properties. And while at least 15 vapor shops, two video stores, and many other retail outlets in Davenport carry a wide range of products that feature CBD as an ingredient, the owners or managers of 10 stores openly advertising CBD declined to speak on the record with The Quad-City Times about CBD sales.

The reason for the silence is — on its face — simple. Iowa classifies CBD as an illegal substance and you cannot possess or sell products containing CBD. Scott County Attorney Mike Walton recognizes the law that makes CBD a crime. But in Davenport, the place where written laws and public policy meet is a gray area for both law enforcement and retailers.

"It's simple but it's not," said one manager at a Davenport store that sells vapor products, pipes, and CBD. "In Davenport, you can sell CBD, but it's not legal.

Walton confirmed there has been plenty of confusion about what is legal or illegal when it comes to CBD. His enforcement comes down to resource allocation.

"It's maybe easy to say, 'Well, we just take out all the CBD and issue tickets and be done with it,'" Walton said. "But it's not that simple. We are talking about police resources — dedicating police time and effort to dealing with every place selling CBD.

"Then we have the issue of having the time and resources to dedicate prosecutors to deal with the issue. And here's an issue most people don't think about: the costs and time it takes to have all that material tested in a lab to verify it contains what it claims to contain. We are already backed up with lab work from the county. Is it wise to add the testing? That's one of the questions we had to ask."

Shelly Meier, the owner of Muscatine's Nutrition Outlet, said she lost about half of her business after the raid. Shelly Servadio, another affected business owner, said she was forced to close her business, Limitless RN, after losing CBD sales.

Meier and Servadio asserted CBD was a hemp-based product and had nothing to do with marijuana.

CBD advocates claimed the legality of sales was bolstered on May 13, 2019 when Governor Kim Reynolds signed SF599. Known as the Iowa Hemp Act, it allows the production of hemp in Iowa in the future. Under the Act, hemp means the plant cannabis and any part of that plant with a THC concentration of not more than 0.3 percent on a dry weight basis. Before hemp production can commence in Iowa, however, the United States Department of Agriculture must approve a state plan.

In response to growing confusion about the law, Iowa Attorney General Thomas Miller issued a statement in July making the state's position clear on the illegality of CBD. In the six-page document Thomas said:

The Bettendorf Police Department took a proactive stance on CBD.

"We sent out letters to all the businesses making it clear CBD sales are illegal," Bettendorf Police Chief Keith Kimball said. "My stance is that if the city becomes aware of CBD sales, we warn the business.

"As long as the business complies, the matter just ends there. If the business failed to comply with the warning we would confiscate the CBD."

Kimball said his department is not interested in filing charges.

"We would prefer not to. We will, though, if we don't get the compliance," Kimball said. "I think some of this has been avoided by not issuing permits to any business that wants to sell CBD. That may have helped. Really, we don't want to spend the time and resources to deal with CBD because we do have some really pressing issues to deal with."

Though the DPD did not respond to a request to talk about CBD enforcement, Walton put some numbers to those pressing issues.

"In Scott County, we will deal with about 5,000 indictable crimes — 3,000 misdemeanors, some of them very serious like DUI, and another 2,000 felony cases arising from things like child abuse, child sexual abuse, sexual assaults, and rape and murder," Walton said. "Earlier I talked about resources. I think you can see we have to prioritize how we use the resources we have.

"In so many ways we already have limited resources. Enforcing the CBD law is just not a high priority. It's that simple."

Walton said the legislative and political climate does play a role in his office's decision to let CBD exist in a gray area.

"CBD sales are something that might be legal next year," Walton said. "And that does factor into what we do in terms of enforcement at the county level. It doesn't make a lot of sense to pursue a crime like CBD sales when it's not a crime months or a year from now."

Cannabidiol, also known as CBD, contains many of the same properties as marijuana. But CBD contains a minuscule amount of Tetrahydrocannabinol (THC), the primary principle ingredient in marijuana.

A single bullet and what prosecutors called 'a long criminal record' landed an alleged Davenport gang member 16 years in prison.

Sarah Kolb, serving a 50-year sentence for the killing of Adrianne Reynolds, 16, has lost an attempt to get a new sentencing hearing.

Bullied Davenport teen: 'I will have to fight'

A Davenport man has been charged with trafficking methamphetamine and being a felon in possession of a handgun.

Man arrested after standoff with police in Barstow. He was wanted on a federal warrant

BARSTOW — A man was arrested Monday after a standoff with officers from the Moline Police Department and Rock Island County Sheriff’s Office.

A sign advertises CBD sales along West Locust Street, outside Your CBD Store, 2824 W. Locust St., Davenport. The signs are common sights in the Iowa Quad-Cities, even though sales of CBD are illegal.

Signs advertise CBD sales at Family Video, 3833 N. Division St., Davenport. While CBD sales are not legal in Iowa, enforcement is not seen as a priority to police and the county attorney.