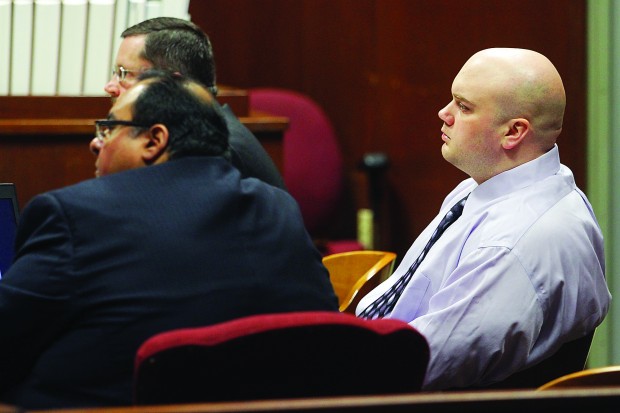 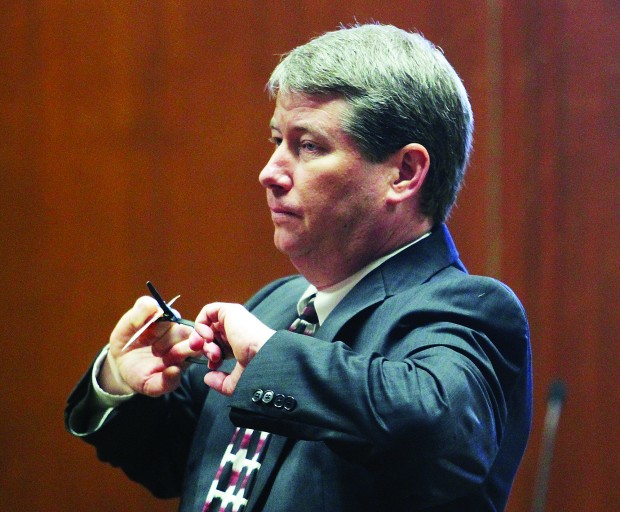 The only remorse Chad Welsh showed was for his own future.

When the jury at his first-degree murder trial returned the guilty verdict Tuesday afternoon, he lowered his head, and the steely cool gaze he had maintained for seven days of testimony broke, even if just briefly.

Welsh will spend the rest of his life in prison.

Meanwhile, in the gallery of a Scott County District courtroom in Davenport, his victim’s mother broke down in tears. Linda Hennes waited for this day for more than five years.

Ten days later, a burned body was discovered in a farm field just outside the Davenport city limits. The remains were destroyed so badly by fire that officers couldn’t even determine the gender at first, much less make an identification.

The identification and death of Angela Hennes was determined after her autopsy Jan. 15, 2007. The 41-year-old mother from Davenport had been strangled. She was 51/2 months

pregnant when she died. A melted plastic zip tie was found around her neck.

Her killer would go unknown for years.

Welsh, of Burlington, was serving time in prison on federal child pornography charges in September 2010 when detectives matched his DNA to a sample found on Hennes’ body in 2007. DNA samples are required of all federal prison inmates.

A tire imprint found at the scene on the farm resembled tires on a vehicle Welsh drove when he was stopped in Muscatine on Jan. 6, 2007, for a traffic offense. The traffic stop occurred within the window of time Hennes was missing.

There were other clues, including a Polaroid film box found stuck to Hennes’ face. When federal authorities searched Welsh’s home in October 2007, suspecting him of possessing child pornography, they found Polaroid pictures of naked women in his bedroom. A Polaroid camera was found in his mother’s home.

Prosecutors built a case around evidence they said put Welsh at the scene in the farm field. The evidence became an afterthought when Welsh’s attorney, Phil Ramirez, made an opening statement conceding Welsh accidentally choked Hennes to death during a sexual encounter and, in a panic, burned and dumped her body in the field.

Welsh took the stand Friday, saying he knew Hennes was a prostitute and wanted to pay her to engage in “breath-control play.” That’s when he said he accidentally choked her to death. And rather than call 911 or take her to a hospital, Welsh said he drove her body 80 miles to Burlington, stored it in his garage for two days, drove it back to Davenport, burned it once and returned the next day to burn it again.

He said he decided to come forward with his story because he couldn’t forget what happened. It’s the only testimony that offers any version of what might have happened during the 10 days Hennes was missing.

Welsh’s attorney, Derek Jones, said Tuesday in his closing argument that the jury should find his client guilty of one of the charges, abuse of a corpse, for taking the steps he did to destroy evidence, which included tying the plastic ties around Hennes’ neck after she died to hide his fingerprints.

Scott County Attorney Mike Walton didn’t buy the story that the ties were applied after the death.

“That makes no sense whatsoever,” Walton said in his closing argument.

Walton held up a plastic zip tie before the jury. He demonstrated how it worked, saying once it’s on, it can be removed only by cutting.

The trial ultimately came down to one question: Did Welsh mean to do it?

They also found him guilty of abusing a corpse and unlawfully terminating a human pregnancy. A sentencing date has not been set, but first-degree murder carries a mandatory life sentence without parole.

Before handing the case to the jury, attorneys on both sides turned some attention on the victim.

The defense said Hennes “lived a dangerous lifestyle” of prostitution and drug addiction.

Walton said Hennes was a loving mother, daughter and friend.

Walton held up two pictures to the jury, one of a grinning Hennes with red hair and one of her charred remains taken at her autopsy.

Welsh called her “just a prostitute” in his testimony.

Walton called her “a person.”

The jury has reached a verdict. Details to come.

Whether or not Chad Welsh meant to kill Angela Hennes when he choked her during a sexual encounter in Davenport in 2007 was the central question behind closing arguments this morning at his murder trial.

Welsh is on trial in Scott County District Court, Davenport, on a first-degree murder charge, which is punishable in Iowa by life in prison without parole.

To be guilty of the charge, evidence must show Welsh had “malice aforethought” and “premeditation,” Scott County Attorney Mike Walton said.

Trying to prove malice and premeditation, Walton pointed to certain evidence, such as the plastic zip ties around Hennes’ neck when her burned remains were found in a farm field Jan. 13, 2007.

Welsh testified Friday that he put the plastic ties around Hennes’ neck after she died in an attempt to cover up his fingerprints.

“That makes absolutely no sense,” Walton said this morning, in reference to Welsh’s testimony about applying the ties afterward.

“What we have here is awful enough without creating fear, imagination and emotion to make it worse,” Jones said.

Jones said Welsh was engaging in “breath-control play” when he accidentally strangled Hennes, a prostitute the defendant says he picked up Jan. 3, 2007, in Davenport.

“He wanted kinky sex, and he wanted a partner willing to do it,” Jones said.

Jones used a portion of his closing argument to turn attention to the victim, saying Hennes was “living a dangerous lifestyle” of prostitution and drug addiction.

Much evidence throughout the seven-day trial pointed to how Welsh tried to hide Hennes’ body. Welsh is also charged with abuse of a corpse, and Jones said today that his client should be found guilty of that, based on his testimony.

But going such lengths to drive Hennes’ body back to his home in Burlington, hide her remains in a container in the garage and then drive her remains back to Davenport only to burn the body twice in a farm field doesn’t mean Welsh meant to kill her, Jones argued.

“The fact he reacted badly after it happened doesn’t mean he intended for it to happen,” Jones said.

The jury is deliberating the case this afternoon.

The jury also has to consider whether Welsh is guilty of terminating a human pregnancy. That charge was added after investigators learned Hennes was 5-and-a-half months pregnant when she died. Welsh testified he didn’t know she was pregnant.

A Davenport couple found a stranger sleeping in their home

A couple who live on Hillcrest Avenue returned home to a surprise Sunday. They found a stranger sleeping in their house.

A Davenport man was booked into the Scott County Jail Wednesday on a charge that he allegedly started a Sept. 8 garage fire.

Davenport police are investigating a report of shots fired late Sunday in the area of East Locust and Farnam streets.

A Davenport man wanted by Davenport and Illinois authorities was arrested Wednesday on multiple warrants.

The Rock Island Police Department responded to a report of gunfire just after 5 p.m. Tuesday at the intersection of 8th Avenue and 12th Street.