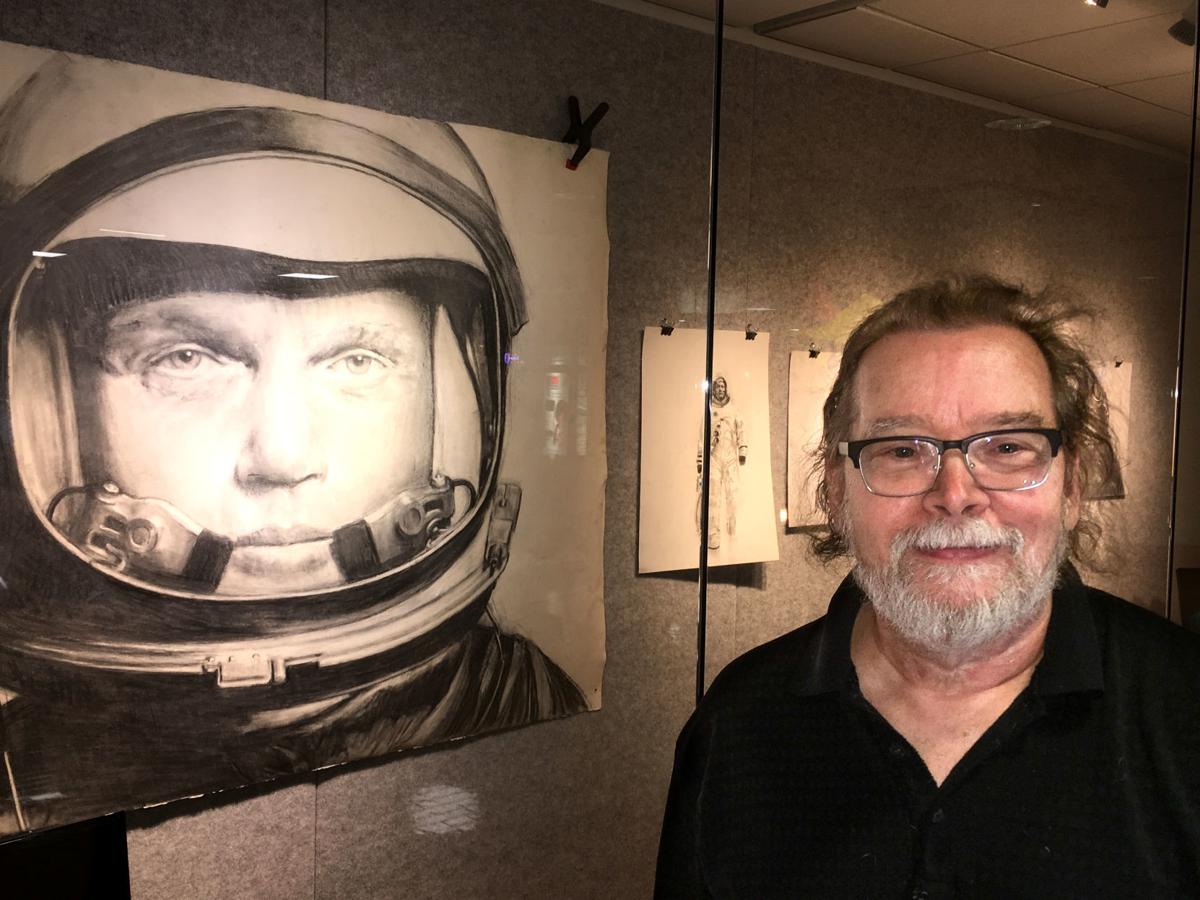 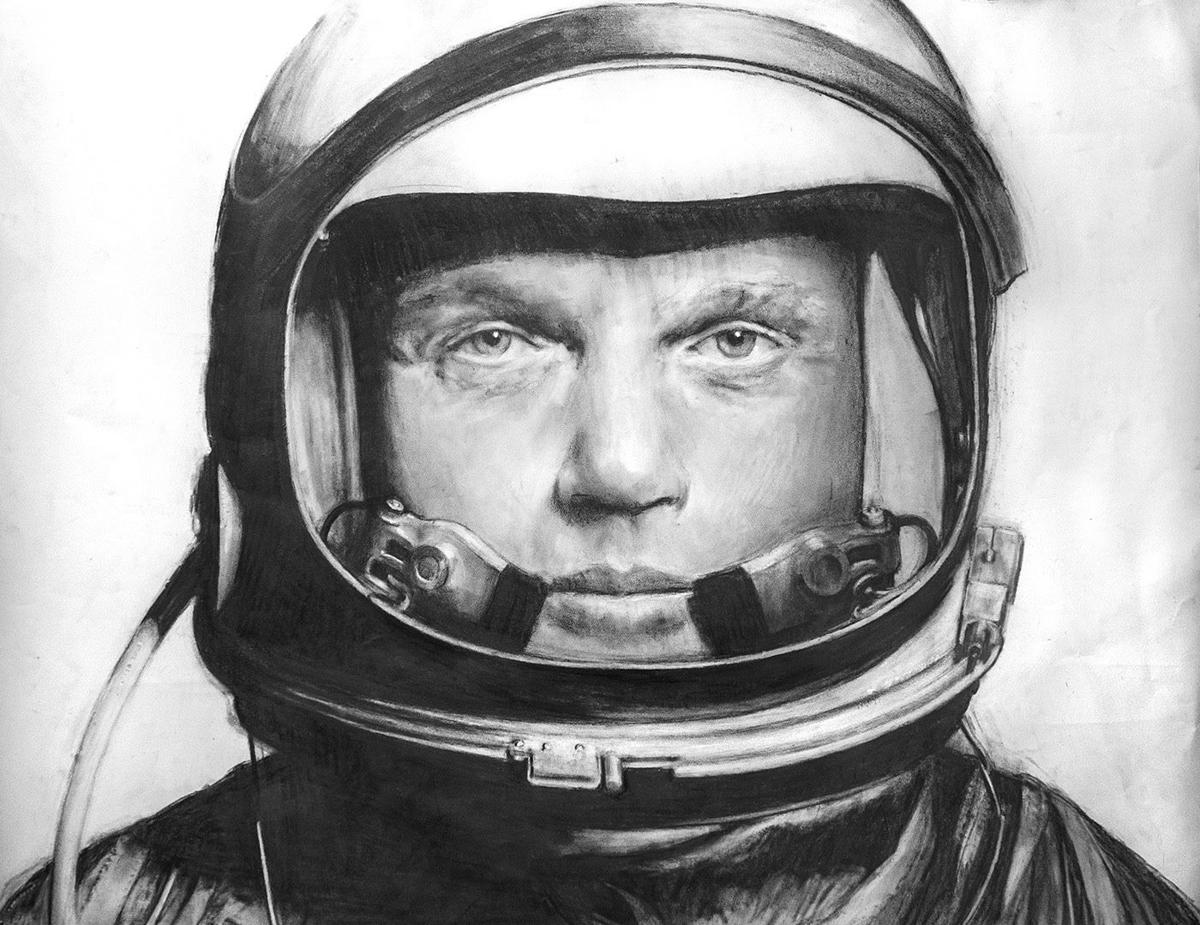 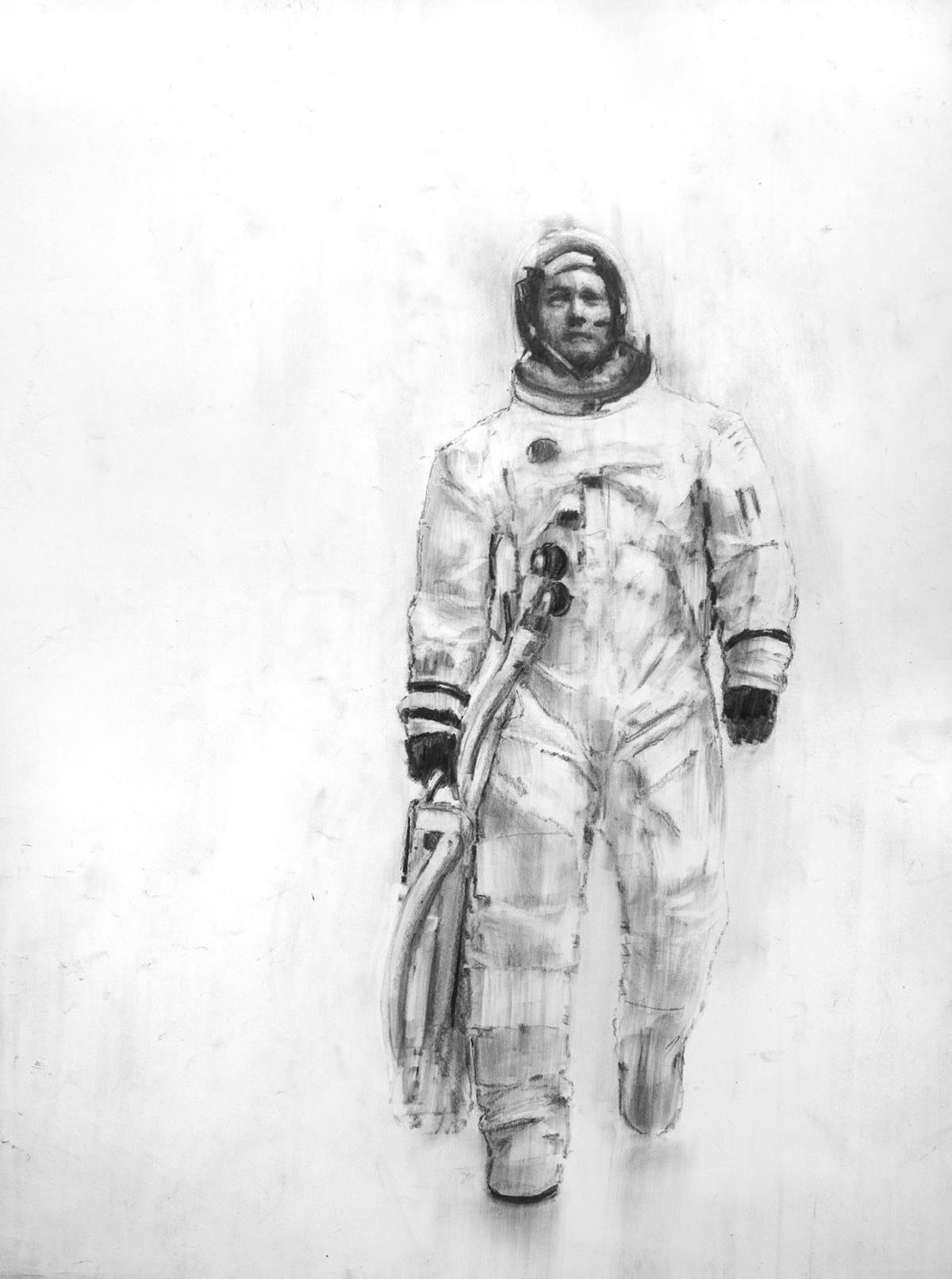 MOLINE — It's fitting that Bruce Walters' first art exhibit at Quad City International Airport is transporting — honoring a form of travel none of us will likely ever take.

“I always feel real sorry for Michael Collins,” Walters said recently at the exhibit, of the only astronaut of the three during historic Apollo 11 not to set foot on the moon. Collins, now 88, waited in the orbiting command module while colleagues Neil Armstrong and Buzz Aldrin spent more than 21 hours on the lunar surface. Collins was the first astronaut to orbit the far side of the moon alone.

At the time of 1969 moon landing, Walters was 14 and on vacation with his parents at the Grand Canyon. He watched the landing at night in their hotel room.

Walters, a Davenport West alumnus, remembers John's Glenn historic orbit of the moon Feb. 20, 1962. “I grew up in the west end, and I went to Roosevelt, which was kindergarten through third grade. We could literally get the entire school in the gym, and when they had these rocket launches, they'd gather 'round to watch. Those are very distinct memories.”

There was a very real concern that Glenn wouldn't make it home alive. “When he came back in, he nearly burned to a crisp,” Walters said. “It's such an institution now. The funny thing about history is, once something is successful, you think it was inevitable.”

He also recalled, his first memory, in 1958 going to a drive-in movie, they stopped the film and his dad held him up to see the Russian Sputnik 3, a Soviet satellite that helped spur the space race.

“I remember pointing at this light going overhead, and it was Sputnik,” he said. “I remember the moment. It freaked out America.”

“I was born with the space age, and those were early heroes,” Walters said. The first moon landing was inspirational, he said. “The one thing science-fiction writers didn't anticipate was that it would be televised.”

Jules Verne, in his 1865 novel “From the Earth to the Moon,” predicted three men launched in a space gun to the moon, taking off from Florida, Walters noted. His drawings at the airport include World War I and World War II pilots, done earlier this year.

“There's a continuation between flight and flight into outer space,” Walters said. “That connection fascinates me.”

An art major at the University of Iowa, he had the legendary James Van Allen as his astronomy professor during senior year, in 1977. Van Allen was Time magazine's Man of the Year for 1960.

“He was the nicest guy,” Walters recalled. He was among the world's most influential of scientists throughout the 1960s, laying the groundwork for exploration of the outer solar system by 23 other robotic probes, including Pioneer 10 and 11, Voyager, and Galileo.

Van Allen was head of the Department of Physics and Astronomy at the University of Iowa from 1951 until his retirement in 1985. In that position he collaborated with the Carnegie Institution, Johns Hopkins University, Jet Propulsion Laboratory, and NASA. Van Allen (1914-2006) was awarded the National Medal of Science, the nation's highest honor for scientific achievement, in 1987 by President Reagan.

At Iowa, Walters asked Van Allen why don't balloons keep going up? and he answered at great length, he recalled. “I remember thinking later, that was the stupidest question,” Walters said. “But when I did the research, I found before he worked with NASA, he worked for the Navy 11 years on balloons.

“He couldn't have been more friendly,” Walters said, noting he almost majored in physics, since he had an aptitude for math.

“I still have an enthusiasm for it that's very genuine,” he said of science and space exploration.

Walters has taught at WIU since 1997, previously serving as chairperson of the communications, fine and performing arts division at Teikyo Marycrest University, Davenport, where he assisted in developing the first undergraduate degree in computer graphics. Walters has worked as a graphic designer and illustrator for corporations, museums, federal and state institutions, advertising agencies and the media.

Examples include life-sized paintings and digital artworks for permanent display at the Hauberg Museum, D-Day and Iwo Jima commemorative illustrations for Springfield Rifle and website design and development. His artwork has been displayed in more than 100 exhibitions, primarily in the Midwest, but also in England, Germany, Japan, New York and Washington D.C. Walters has won best-of-show awards in seven different media: from graphite drawings to digital artwork.

His video projections at the airport were initially displayed in 2012 as part of the traveling exhibit, "NASA | ART: 50 Years of Exploration" at the Figge Art Museum. That included a companion display of spaceflight instruments and models designed and built at the University of Iowa's Department of Physics and Astronomy.

Drawings of astronauts and space from area elementary students move in one of the videos.

For one with a Mars landing, Walters asked musician Brian May for permission to use Queen's “We Will Rock You” (1977), which he wrote. May wrote back and said 'with my blessings',” Walters said. “Few rock stars have PhDs in physics. He does, and has written for astronomy magazines,” he said. “I think he was delighted to have that connection." May earned a PhD in astrophysics from Imperial College London for work started in 1971 and completed in 2007.

The airport exhibit includes other works that incorporate neon and video, with other lighting effects, from artists Gail Ray and Dawn Wohlford. Vintage automobile signs will be on loan from K.V. Dahl of Dahl Ford. An interactive exhibit on Moline-based Velie Motors allows viewers to climb onto a vintage bicycle and pedal in order to illuminate the display — courtesy of Bill Wohlford and Ron Kessel.

You can see Walters' exhibit at behance.net/gallery/82755255/Exploring-NASA. His personal website is bruce-walters.com.

Police say some cattle died when truck overturned on Interstate 80

Some cattle died when a truck pulling a cattle trailer overturned on Interstate 80 late Thursday.