In public-input meetings on Davenport's flood-fighting plans, a majority of citizens said they do not want the city to build a flood wall on the riverfront.

Early next month, the city council is to take receipt of a "road map" that will include more than 40 flood-mitigation projects for the downtown and its 9 miles of riverfront. Earthen berms, permanent pumping stations and major storm-sewer repairs are among the tools the city is likely to employ in its efforts to reduce the severity of damage wrought by increasingly frequent Mississippi River floods.

But the council is sensitive to the fact that most respondents giving input on flood mitigation say, despite the flood of 2019, they still don't want a flood wall disrupting downtown views of the river.

At a council work session this week, aldermen were brought up to speed on what is expected of next month's presentation by the city's flood-mitigation consultants at H.R. Green. The Cedar-Rapids-based firm is supplying engineering and design plans for the city.

A final presentation is expected on Nov. 9, and the council may vote on adopting the plan the next day, Nov. 10. While no action was taken, Alderman Judith Lee, 8th Ward, asked Tuesday that the council be given more time to review H.R. Green's recommendations before a vote is taken.

Lee and Mayor Mike Matson also reiterated the importance of conveying to the public that the plan is not one of flood prevention but of mitigation. The city cannot prevent floods, but it now is making specific plans to make the impacts of floods less severe on city assets while helping citizens protect their property, too.

"We don't have an infinite amount of options because our riverfront is what it is," Director of Public Works Nicole Gleason said.

The Flood Resiliency Plan will rely on annual capital-improvement funding by the city and on state and federal grants. The price tag is likely to exceed $100 million in total. Some private property owners may qualify for buyouts.

Much of what needs to happen to reduce flood damage in Davenport must occur under ground. Damaged and dated storm sewers allow floodwaters to rise from below, though over-the-top inundation is more obvious to the public.

"We need to be clear to the public that over-the-top protection is no good without the underground improvements," Kyle Gripp, at-large alderman, said.

Alderman Matt Dohrmann, 5th Ward, said he wanted to see more than aerial photos of the proposed flood-mitigation projects because street-level images would better convey any losses or obstructions of river views from the downtown.

The council has told H.R. Green the city desires mitigation plans to a flood stage of 22 feet, though such measures would add another 2 feet of wave resistance, taking the mitigation efforts to 24 feet. The flood of 2019, which prompted a breach in a River Drive HESCO barrier, reached 22.7 feet at Davenport, a record.

Watch Now: UAW members from get help on the picket line from other UAW locals and AFSCME

Watch Now: UAW members from get help on the picket line from other UAW locals and AFSCME

Unless otherwise noted, trick-or-treat times are for Sunday, Oct. 31. 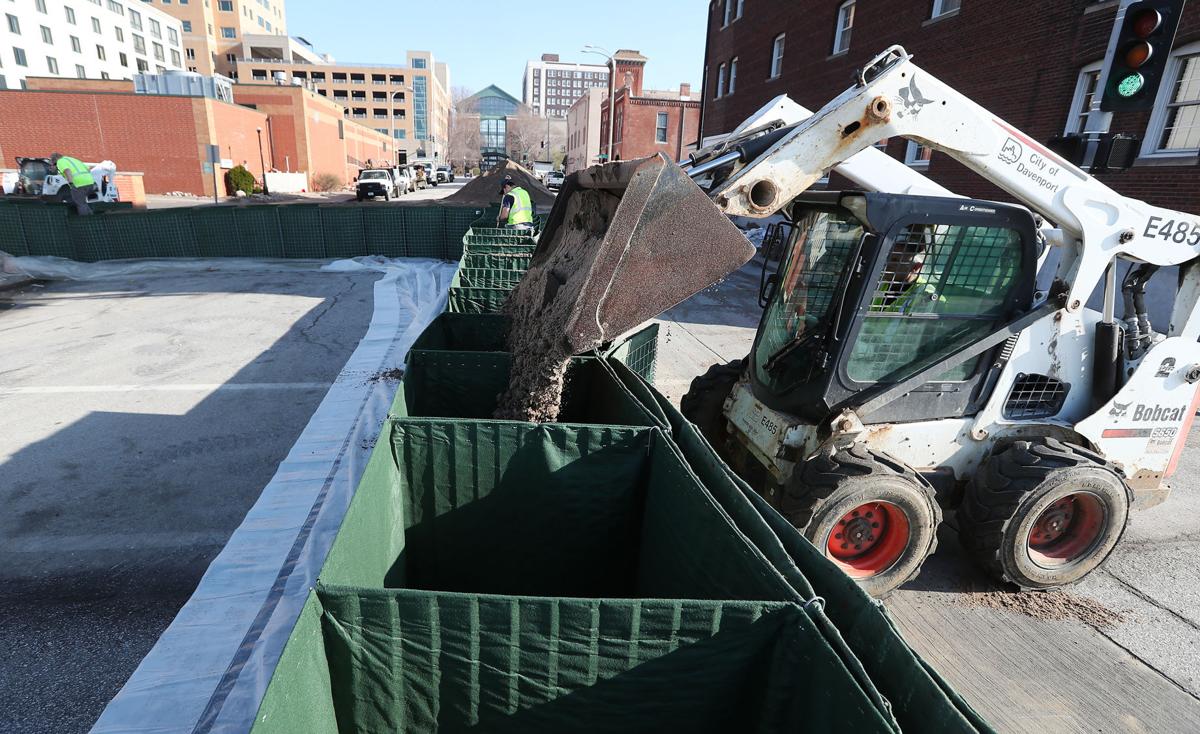 Davenport city workers begin setting up and filling the HESCO barriers in April 2020 at the intersection of River Drive and Perry Street.

Davenport city workers begin setting up and filling the HESCO barriers along River Drive on April 8, 2020.

Davenport city workers begin setting up and filling the HESCO barriers along River Drive on April 8, 2020. 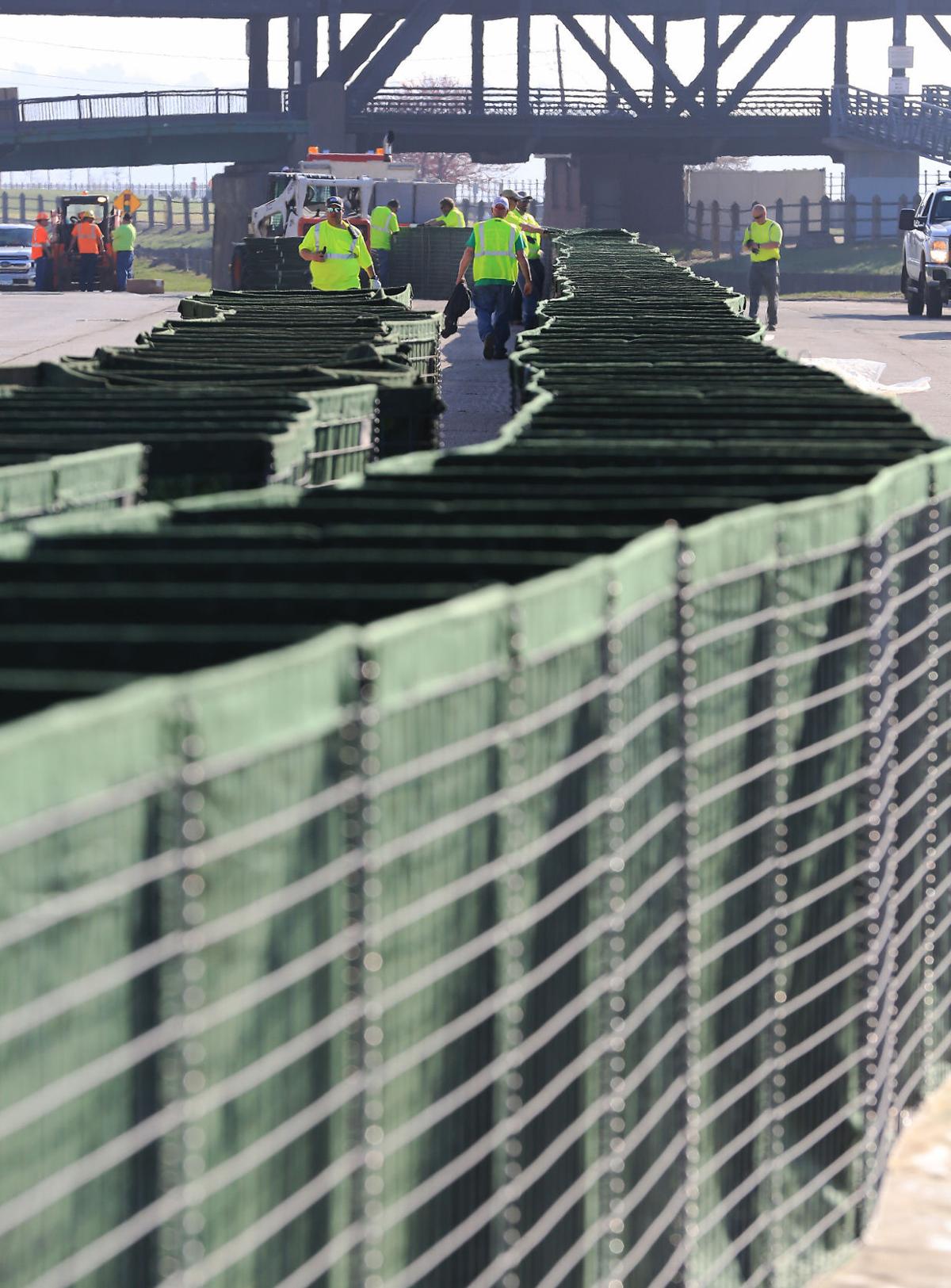 Davenport city workers begin setting up and filling the HESCO barriers along River Drive, Wednesday, April 8, 2020, as the Mississippi River is expected to climb more than two feet above the 15-foot flood stage Friday. 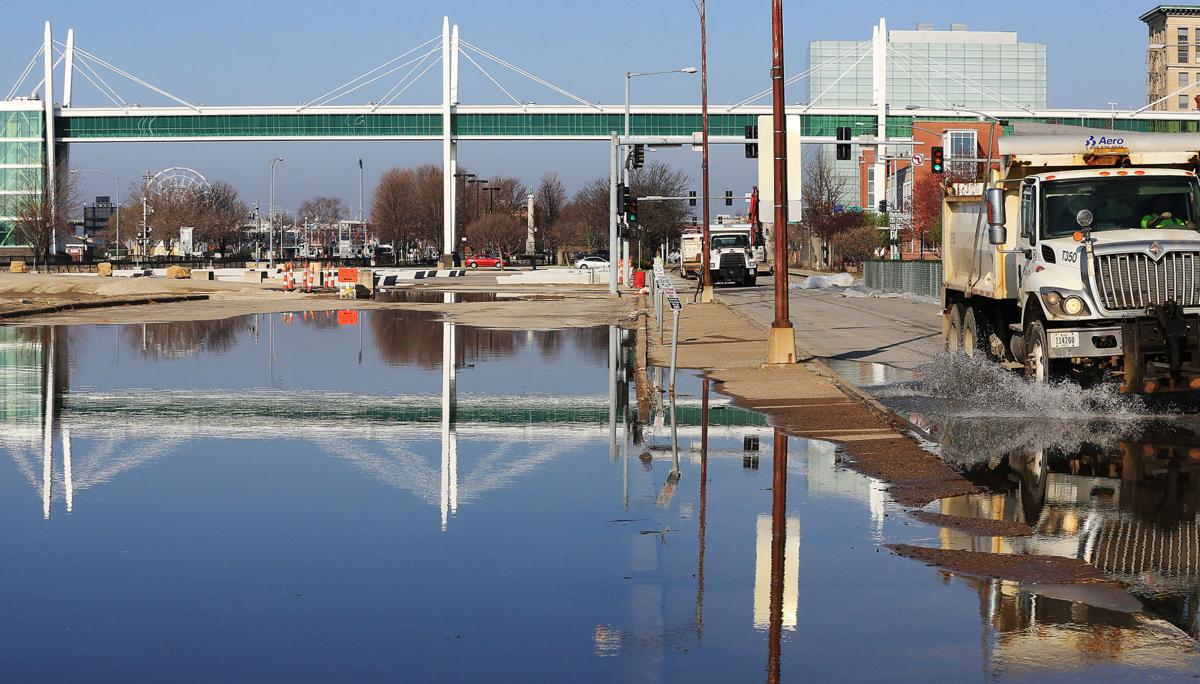 Davenport city workers begin setting up and filling the HESCO barriers along River Drive, Wednesday, April 8, 2020 as the Mississippi River continues to rise, heading for a 17.7-foot level on Friday. Flood stage is 15 feet.