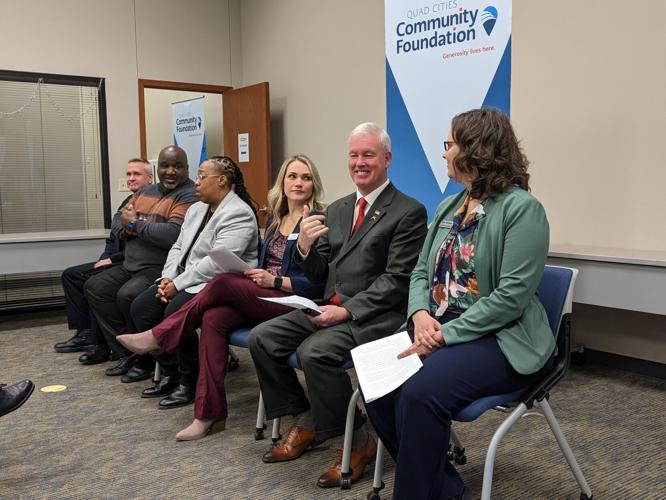 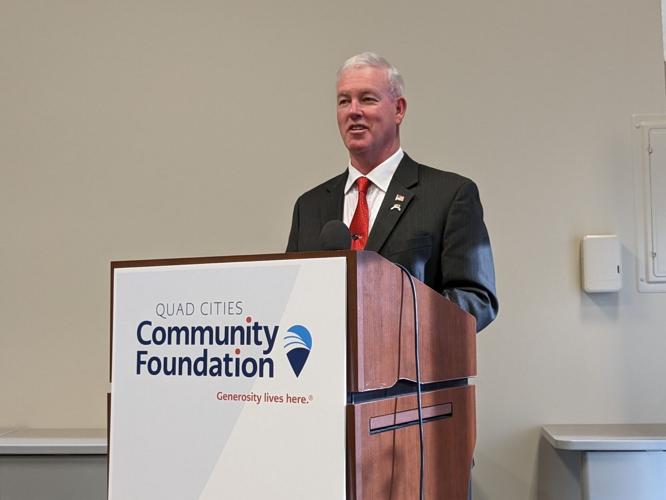 Davenport Mayor Mike Matson praises the Group Violence Intervention strategy and members who work on it at a press conference Monday Jan. 9, 2023 at the Quad Cities Community Foundation office. 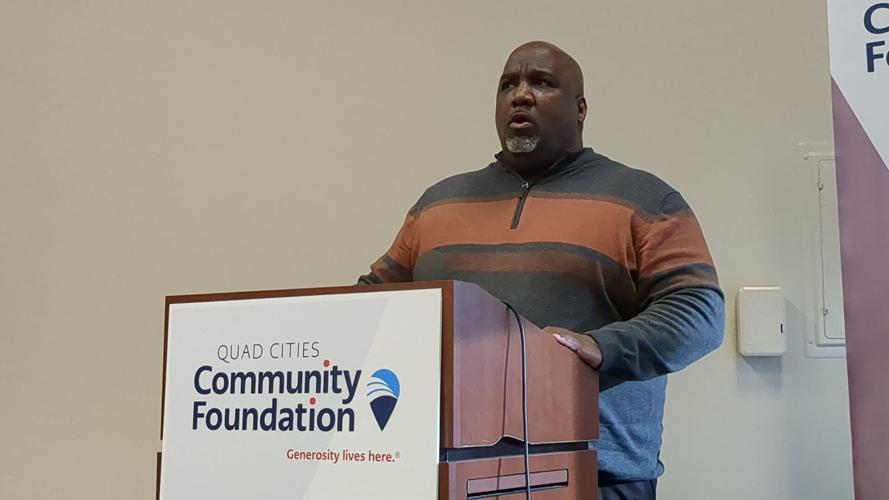 Community member and GVI advocate Dwayne Hodges speaks at a press conference on Jan. 9, 2023, at the Quad Cities Community Foundation. 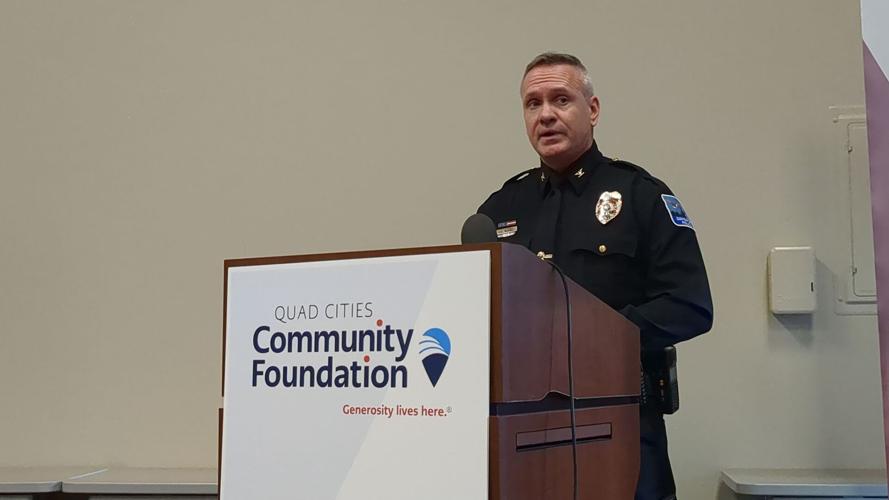 Davenport Police Chief Jeff Bladel speaks at a press conference on Monday, Jan. 9, 2023, at the Quad Cities Community Foundation. The foundation is awarding Family Resources $300,000 for three years to hire a permanent staffer to work on the Group Violence Intervention strategy.

Davenport's strategy to reduce gun violence is growing, including to other area cities.

The Quad Cities Community Foundation awarded Family Resources $300,000 over three years to pay for a full-time staffer to work on Group Violence Intervention, an anti-violence initiative Davenport launched about eight months ago.

The Group Violence Intervention, or GVI, strategy followed a record number of incidents involving gunfire in 2020.

The three-pronged strategy involves representatives from law enforcement, social-service organizations and community members to talk with people at highest risk of being perpetrators or victims of gun violence.

They bring an anti-violence message oft repeated: "We want to see you safe, alive and out of prison." The message extends an offer of help from Family Resources along with a warning from community members and law enforcement officials that gun violence won't be tolerated.

Family Resources has a unit dedicated to surviving loved ones of homicide and other violent crimes. Workers at the agency have been meeting people face-to-face, called "custom notifications," without hiring additional staff members.

But the grant will change that.

"Our team is trained in order to provide that custom-notification service but also to take those clients on in services and programs Family Resources provides," said Tee LeShoure, who leads the survivors resource team.

The Quad Cities Community Foundation grant will allow them to add a full-time staffer, pay community member volunteers a stipend and start a research project with St. Ambrose University to evaluate the GVI strategy's effectiveness.

“Oftentimes, people may not be receptive to accepting services right away,” said Sarah Ott, Davenport's chief strategy officer. “What it takes is trust-building with our social-services providers and our community members, and you can’t build trust without continual engagement. With the Quad Cities Community Foundation’s Transformation Grant, we will now have the capacity in Family Resources and our volunteers to continue those conversations and follow through on our offer to help.”

So far, since implementing the strategy in the summer of 2022, members of the team have contacted 73 individuals, Ott said. Of those, two people went on to be involved in gun violence, she said.

In Davenport, 0.19% of Davenport's population is involved in about 55% of the city's gun violence, according to an analysis of Davenport crime data by John Jay College's National Network for Safe Communities. That means representatives have contacted a significant share of people driving gun violence in Davenport.

In 2022, gun deaths and shots-fired incidents declined from the year before, according to statistics from the police department. In 2022, police responded to 171 shots-fired incidents, down from 206 in 2021. In 2022, there were four shooting homicide victims, down from nine in 2021. The number of non-fatal shooting victims, however, stayed roughly the same. In 2022, there were 44 non-fatal shooting victims, up slightly from 43 in 2021.

Davenport Police Chief Jeff Bladel said there's likely a number of factors driving the reduced gun crime, and building trust with social services organizations and the police department through group violence intervention could be one of those. But, he said, more research is needed.

Part of the grant will go toward a research project at St. Ambrose University to evaluate the effectiveness of the strategy by interviewing people who were contacted. The research will also help in securing additional grant funding in the future, said Family Resources Director Nicole Cisne Durbin.

"We can guess what are the gaps in services, but we want to actually talk to people who are impacted by the gun violence," Cisne Durbin said. "And directly ask them: What would it take? How did you get here? What did we miss as a community? Instead of us just making those assumptions."

The grant is part of the Quad Cities Community Foundation's Community Impact Fund.

“Complex community challenges like this can only be solved through collaboration,” said Sue Hafkemeyer, president and CEO of the Community Foundation. “We’re excited to see an innovative tool for promoting racial equity and ensuring our community is safe for everybody who calls it home. By supporting this effort now, we believe we can transform it into the wider regional strategy needed, activating the entire community together.”

The Rock Island Police Department in 2023 plans to partner with Davenport police and Family Resources to expand Group Violence Intervention to Rock Island, Mayor Mike Thoms said in his state of the city address on Monday.

The city had a startling string of homicides in 2022, which the mayor called a "serious issue" and pledged the city would work to find solutions to gun violence in the city.

"We need this strategy to be regionwide," she said.

Davenport Mayor Mike Matson praises the Group Violence Intervention strategy and members who work on it at a press conference Monday Jan. 9, 2023 at the Quad Cities Community Foundation office.

Community member and GVI advocate Dwayne Hodges speaks at a press conference on Jan. 9, 2023, at the Quad Cities Community Foundation.

Davenport Police Chief Jeff Bladel speaks at a press conference on Monday, Jan. 9, 2023, at the Quad Cities Community Foundation. The foundation is awarding Family Resources $300,000 for three years to hire a permanent staffer to work on the Group Violence Intervention strategy.