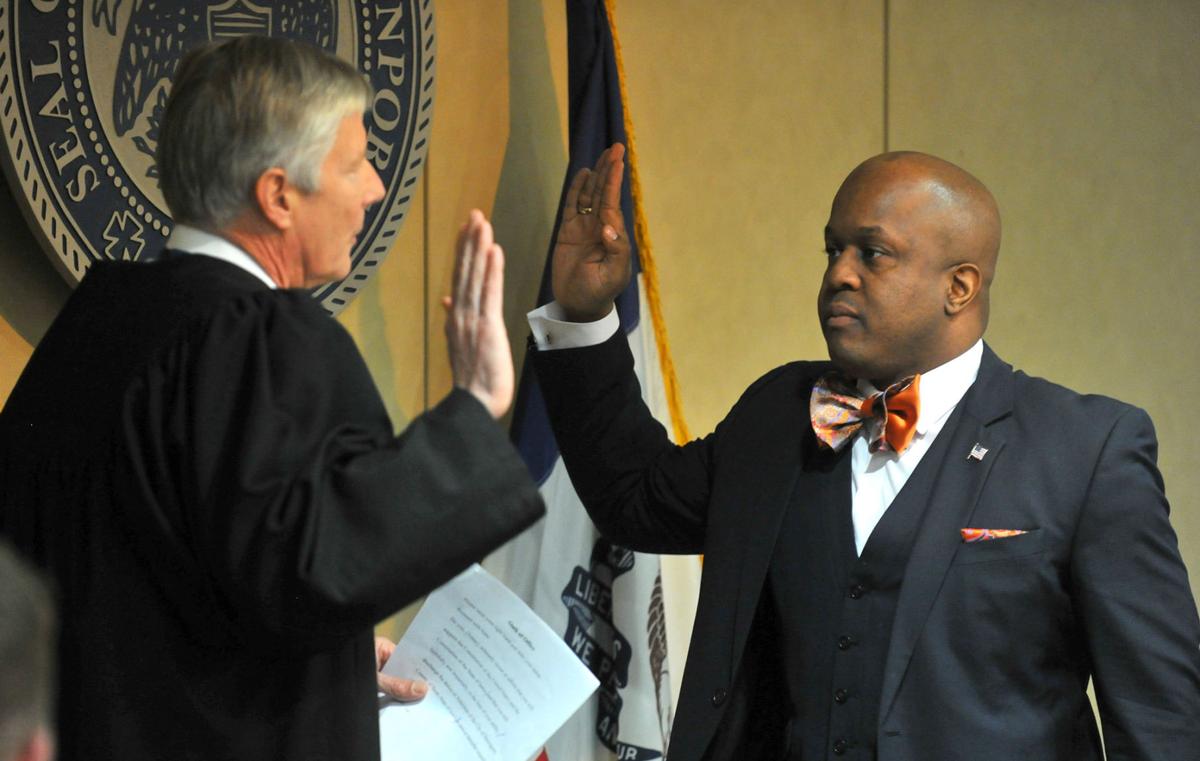 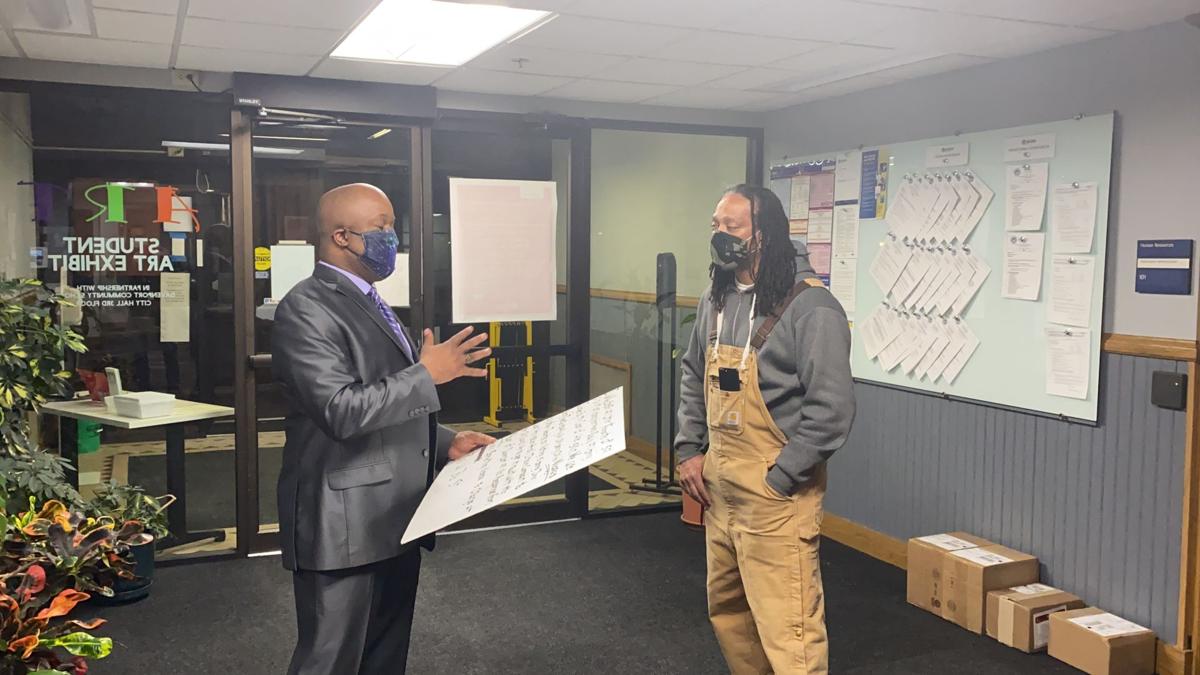 Davenport Alderman Patrick Peacock, Ward 7, (left) speaks to Davenport resident Willie Shorter (right) about his complaints of harassment and discrimination at The Heritage, a city-owned building that offers Section 8 rental-assistance following Davenport City Council's Committee of the Whole meeting Wednesday, Feb. 17, 2021. Peacock announced at the meeting that he will step down from City Council in April after serving just over a year in the role.

With 10 months left in his first term, Davenport's lone Black alderman announced his resignation, stating his colleagues are "tone deaf" when it comes to addressing racial inequality and discrimination in the city.

Alderman Patrick Peacock, Ward 7, announced Wednesday at Davenport City Council's Committee of the Whole meeting that he will step down from the position in April after serving just over a year in the role.

Peacock was elected to Davenport City Council in 2019 for the open 7th Ward seat to replace then-longtime Alderman Mike Matson, who was elected mayor.

The ward stretches roughly east to west from Eastern Avenue to North Pine Street and north to south from West Central Park to 53rd Street.

Asked why he decided to step down, Peacock initially cited "a multitude" of "personal reasons," without elaborating. But while talking with a Black Davenport resident in the hallway following Wednesday's meeting, after the resident accused city officials of ignoring his complaints about mistreatment and harassment along with other residents of The Heritage, a city-owned building that offers Section 8 rental-assistance, Peacock said: "That is my biggest aggravation."

"Because nobody on the council hears people," Peacock told Heritage resident Willie Shorter, 52, in front of a Quad-City Times reporter. "I'm not saying that's one of the reasons why I'm resigning, but (chuckles) this is one of the reasons. Because, we are tone deaf when it comes to people of color."

Peacock, a Davenport realtor and retired U.S. Army captain, sharply rebuked his colleagues last week for their apparent reluctance to add staff to more quickly investigate cases of discrimination in the city.

"Disgusting," Peacock said following a City Council work session to consider a request to add an investigator to help with a backlog of cases handled by the Davenport Civil Rights Commission.

"Before I leave this council, let me help you," Peacock told Shorter Wednesday. "We have people in Davenport that's hurting ... and I think we do a disservice when it comes to people of color, and not just color — disabilities, sex, the protected classes — that's what they do."

"We can spend $750,000 on a fountain," Peacock said, referring to a $770,450 contract awarded by the city this fall for an upgrade to Kaiserslautern Square downtown. "You know, we can do all of these great things for development, but we don't hear people. ... They don't care."

Shorter had earlier addressed the city council claiming harassment in city public housing, bearing a makeshift sign stating he and other tenants "are being harassed daily" and "judged" by the color of their skin.

"We are being called racial slurs. People are spitting on our door," Shorter said.

Shorter said he and a number of other residents have a fairly lengthy list of grievances against The Heritage. He alleges the property isn't properly cleaned; that COVID-19 "spread through the building"; that Davenport Police are called to respond to spurious complaints against Black residents; and that a laundry room used by a number of Black residents was vandalized with animal feces.

"And every time I come over (to City Hall) my complaint never gets through to what is supposed to be done," Shorter said.

Mayor Mike Matson and other council members expressed surprise at Peacock's resignation, and took issue with his claims.

"I wish him the best in his future endeavors, but don't necessarily agree with his comments," said Alderman Matt Dohrmann, Ward 5.

Mayor Mike Matson declined to comment on Peacock's comments and pending resignation, other than to express his surprise and that "I wish him well."

Aldermen would have 60 days to appoint someone to fill the seat, otherwise a special election will be held at the earliest practical date, but no less than 32 days after the notice is received by the county commissioner.

If an appointment has been made, and the petition for a special election is filed, the appointment would be temporary and an election will be held to fill the vacancy permanently.

Peacock's two-year term expires at the end of the year.

"It's my total regret that I didn't get the opportunity to finish my term as 7th Ward alderman, nor champion some of the causes I wanted to for the great city of Davenport," Peacock said. "It's just personal concerns I have."

Asked if those concerns relate to Davenport City Council or city government, Peacock initially said "no."

"There's no ill feelings towards no council members. Nothing like that," Peacock told the Quad-City Times before speaking with Shorter after the meeting. "It's just some personal concerns I have. It's just I need to take care of those things right now."

Peacock said he has informed some residents of the 7th Ward of his intention, "and I think that there's some names that have been considered," but would not elaborate.

"I will let the great people of the 7th Ward figure that part out," Peacock said. "I just have the deepest regrets that I can't finish my term as alderman."

Davenport Alderman Patrick Peacock, Ward 7, (left) speaks to Davenport resident Willie Shorter (right) about his complaints of harassment and discrimination at The Heritage, a city-owned building that offers Section 8 rental-assistance following Davenport City Council's Committee of the Whole meeting Wednesday, Feb. 17, 2021. Peacock announced at the meeting that he will step down from City Council in April after serving just over a year in the role. 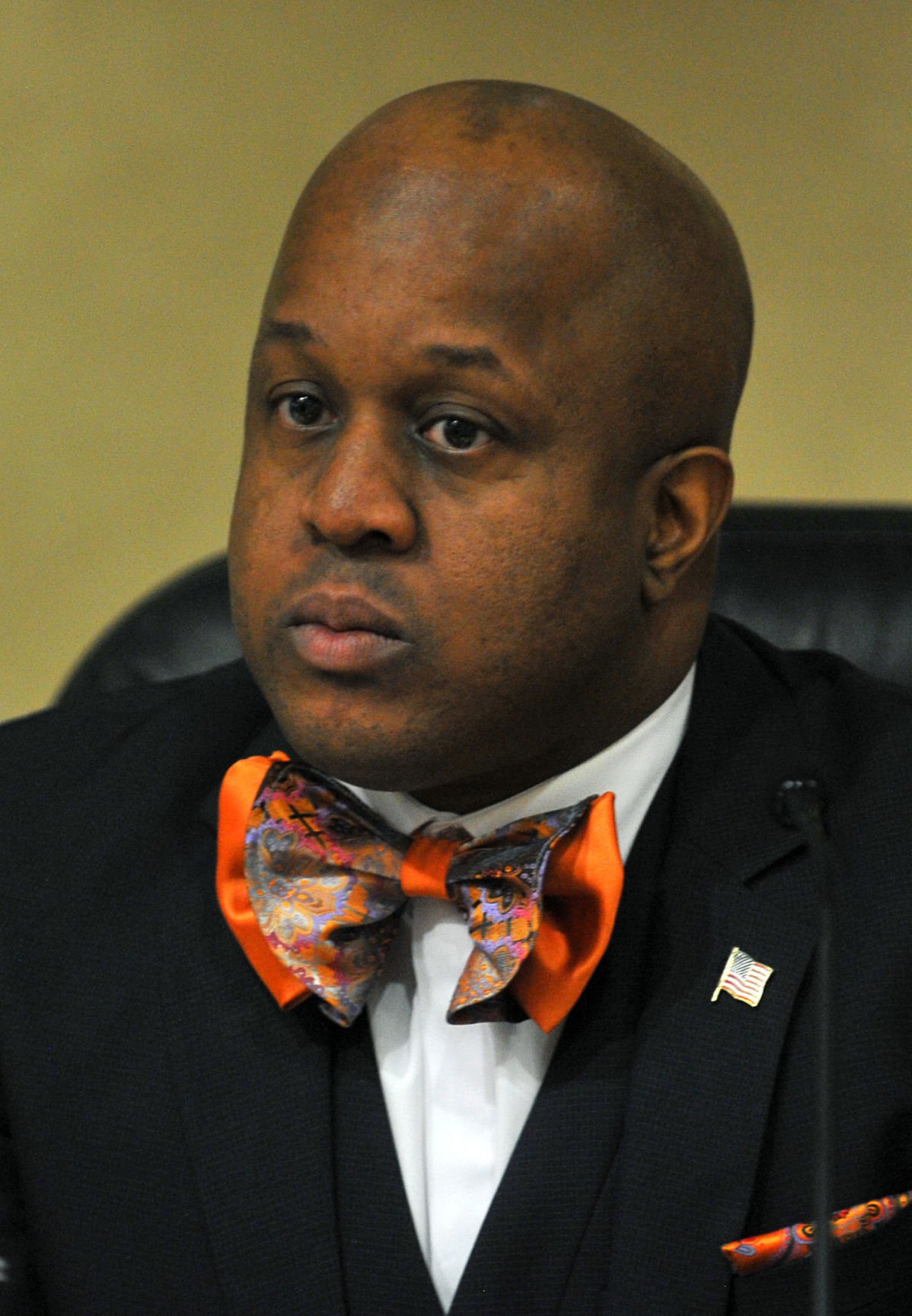