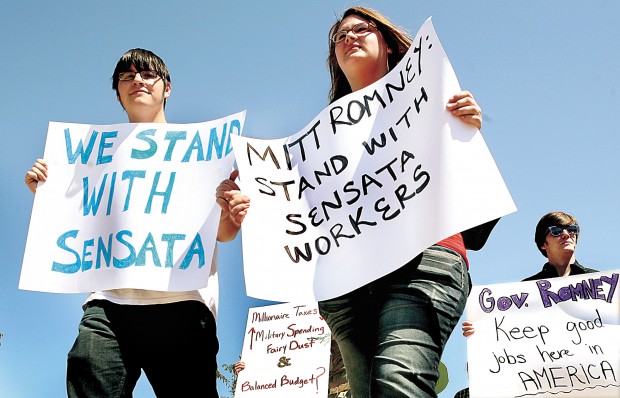 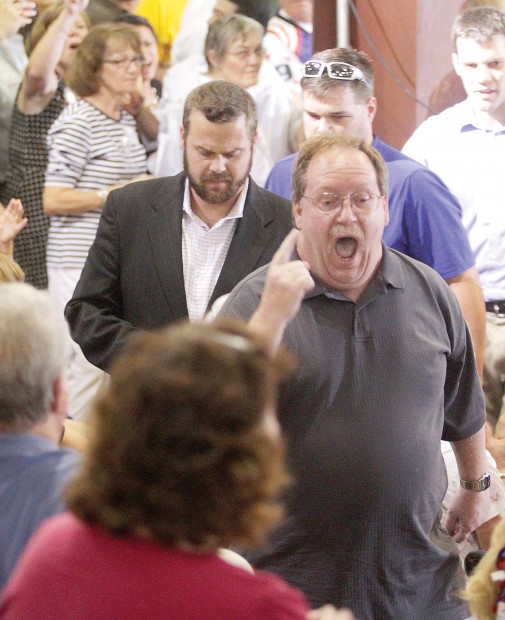 Protests on Wednesday from those opposed to the ideas of Republican Gov. Mitt Romney as he runs for president remained true to messages espoused by the Democratic Party.

A news conference in Bettendorf featured labor leaders and leadership from the Iowa Democratic Party, while an organized protest with about 25 people was held at the site of Romney’s appearance at LeClaire Manufacturing in Bettendorf.

Sign-holders outside the plant and several inside the rally supported the position of workers at the Sensata Technologies plant in Freeport, Ill.

Tom Gaulrapp of Freeport was seated seven rows in back of the speaker’s podium when he and two colleagues attempted to speak to Romney, but they were drowned out by the candidate’s supporters.

Gaulrapp and his two companions were escorted away by authorities as audience members started the cheer, “USA, USA.”

In an interview after the incident, Gaulrapp said he has worked at Sensata for 33 years and his job is being moved to China. The last day of work is expected to be Nov. 2. The plant was purchased in 2010 by Bain Capital, the firm that Romney co-founded but left about a decade ago.

Gaulrapp said his views brought a “very negative reaction” from those at the Romney rally. He said he has made his pitch at other political rallies in Iowa and in Wisconsin. A petition asking Romney to help save the jobs was delivered to the Republican headquarters in Madison, Wis., where officials called the police for help, and also at the Scott County Republican Party office in Davenport.

“We thought this was a perfect opportunity to make sure he (Romney) knows we are not going away,” he said.

Gaulrapp said those who escorted him out of the rally were professional and courteous.

“They couldn’t have been nicer,” he said.

Sensata supporters from the area stayed outside during the rally. Julie Ross, Davenport, wore pink and passed out a flier on pink paper entitled, “Bain still outsourcing jobs to China.”

Earlier Wednesday, Democratic Party activists and labor union representatives derided the policies of Romney and his running mate, Rep. Paul Ryan of Wisconsin, during a news conference at the United Steelworkers union hall in Bettendorf.

Iowa Democratic Party Chairwoman Sue Dvorsky termed Romney’s record on jobs as “abysmal,” adding that the governor failed his constituents in Massachusetts and would do the same for Americans.

Working men and women would suffer in a Romney presidency, according to Charlie Wishman, secretary-treasurer of the Iowa Federation of Labor. He noted that President Barack Obama’s agenda would benefit the U.S., but he is too often blocked by the “obstructionist Congress.”

With Romney in charge, even more jobs would be outsourced overseas, said Pat Stock, with the United Steelworkers Union. Instead of a GOP campaign phrase of “we built that,” Stock suggested it be changed to “we outsourced that.”

Dvorsky vowed to discuss the jobs and economy with Republicans every time there’s a Romney campaign event in Iowa. The entire country depends on Iowans asking the candidates the tough questions, she added.

Protesters included Maria Dickmann of Davenport, a representative from MoveOn.org. She said the Republican budget would kill 1 million American jobs if Romney and Ryan win election.

“We need to continue to grow our economy,” she said.

Most of the protesters outside the rally left the site after Romney began his speech. Gaulrapp left Wednesday afternoon for his home in Freeport.

“I have to work tonight,” he said.

Romney tells Q-C: We will get America growing again