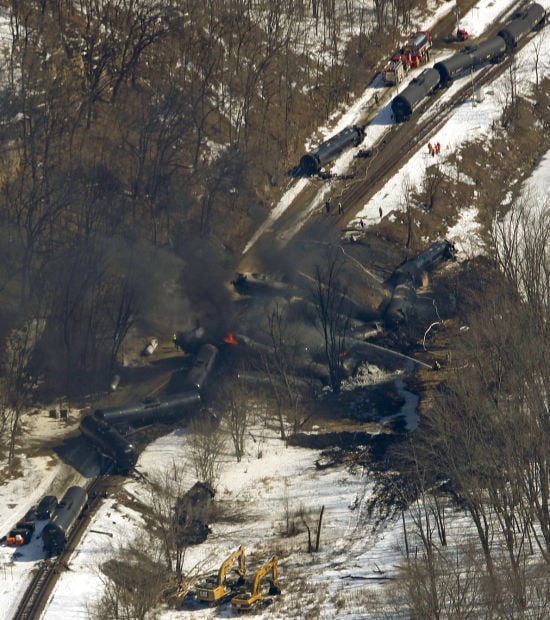 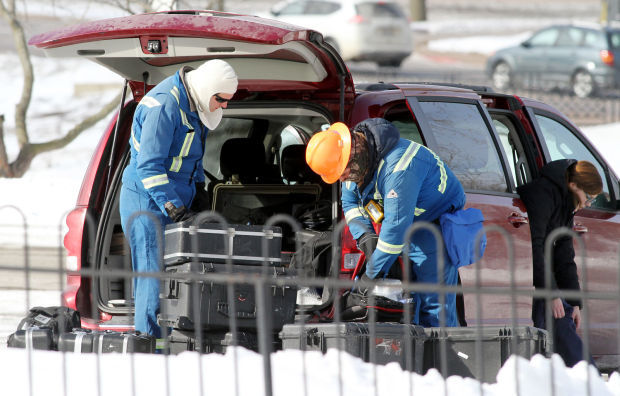 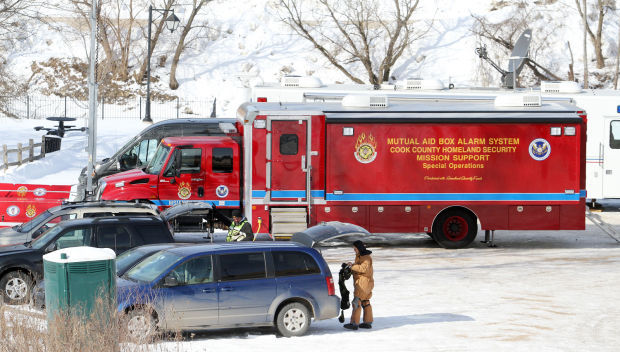 Workers prepare to go to the Burlington Northern Santa Fe railroad train derailment site Friday near Galena, Ill. Workers used Depot Park area for staging before going to the site of the derailment. 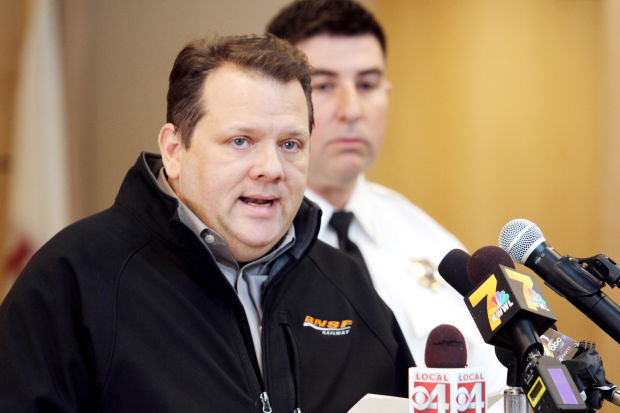 “No oil has reached any waterway,” Andy Williams, director of public affairs for Burlington Northern Santa Fe, said at a Friday briefing. It is unknown how much oil spilled when the cars derailed about 1:20 p.m. Thursday. A total of 21 cars derailed 3½ miles south of Galena. 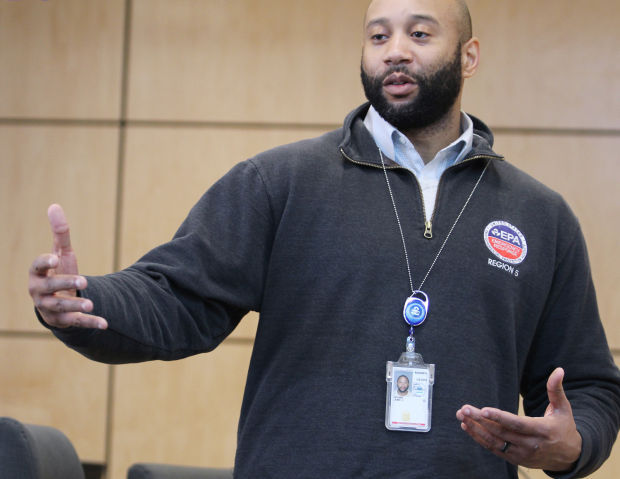 Jamie Brown of the U.S. Environmental Protection Agency about the three to five feet of frozen ground that seems to be preventing oil from sinking into the soil from the Burlington Northern Santa Fe railroad train derailment. 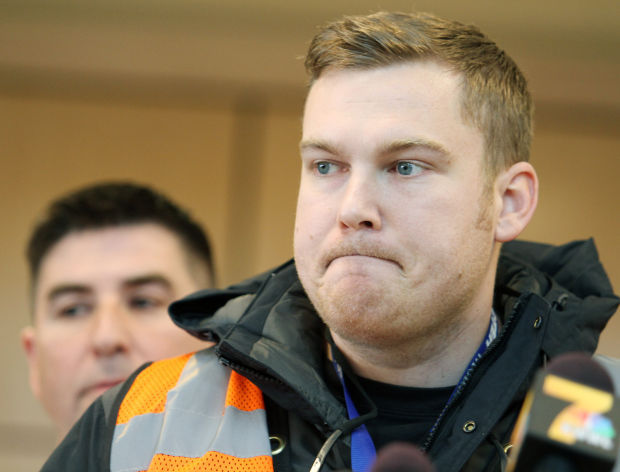 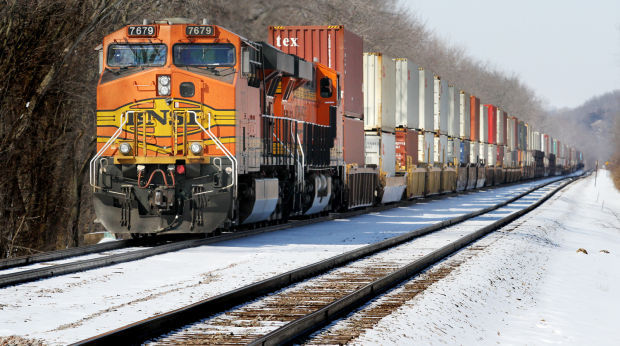 A Burlington Northern Santa Fe railroad train loaded with shipping containers sits on a side track unable to move because of a derailment south of Galena, Ill.

GALENA, Ill. — Dozens of officials are monitoring the potential of an environmental disaster in northwestern Illinois as cleanup continues at the site where several crude oil railroad cars derailed Thursday.

The latest effort to stop contamination came late Friday afternoon when Jo Daviess County Sheriff Kevin Turner said fire crews had stopped spraying water on a breached and burning tank car to allow the escaping oil to be burned off.

“This strategy is the safest option for public safety and will ensure there is no impact to the waterways in the area from crude oil that has been slowly released from a breached tank car,” Turner said.

The Burlington Northern Santa Fe Railway train derailed about 1:20 p.m. Thursday in a remote area 3½ miles south of Galena and near where the Galena River meets the Mississippi River. Environmental contamination remains one of the biggest concerns.

“No oil has reached any waterway,” Andy Williams, director of public affairs for the railroad, said earlier Friday.

It is unknown how much oil spilled when 21 cars derailed. The BNSF train, which originated from Bakken oil field in North Dakota, included 103 cars loaded with crude oil and two buffer cars full of sand.

All tank cars involved in the incident were the unjacketed CPC-1232 model with half-height head shields. Williams said they’re an older model and not the recommended model for the industry, although reports indicate the cars had necessary safety precautions required by federal law.

The cause still is under investigation. No injuries were reported.

Dozens of local, state and BNSF emergency personnel remained on scene all day working to contain the incident.

About three to five feet of frozen ground seems to be preventing oil from sinking in, which is a good thing, U.S. Environmental Protection Agency on-scene coordinator Jaime Brown said.

“It’s less permeable,” Brown said. “That’s one of the factors that is really helping us. The oil is not as mobile as it could be.”

Brown said cleanup could last as long as two weeks.

A crew collected water samples and sent them to labs for testing, and Brown said he expects the results within two weeks.

Brown said that once the train cars are righted, a crew will take samples of the soil around where the accident occurred.

EPA will consult the U.S. Army Corps of Engineers, U.S. Fish and Wildlife Service and the Illinois Environmental Protection Agency before doing any excavating work on scene. Brown said cleanup efforts normally include excavating and collecting samples down to the clean dirt and then backfilling.

“We try to be as minimally invasive as possible,” Brown said.

The air is being monitored for fine particulate matter and gases such as carbon dioxide, carbon monoxide and sulfur dioxide, Shawn Wnek, an independent toxicologist working for BNSF, said.

Local officials announced a voluntary evacuation of an area that is within one mile of the incident. Galena City Administrator Mark Moran said the area has four occupied homes, and one family evacuated. The others declined.

Few roads in the area and marshy ground have made access to the site difficult. Crews are using the Galena bike path, which ends near the BNSF track, to shuttle emergency personnel and supplies to the site. The path remains closed to the public.

Williams said a temporary road is being built out to the site to aid in getting equipment on scene.

Williams said he’s unsure when the track will be back in service. He said the track that runs along the east side of the Mississippi River past Galena and through Savanna, Ill., before heading east is a mainline that sees about 40 trains daily.

Williams said he didn’t know where the train was headed.

Of the original 105 cars, all but the 21 cars involved in the derailment have been taken away, Williams said.

The derailment was on the minds of Galena residents at a local VFW tavern Friday afternoon.

Alan Olson, 63, a retired building restoration supervisor, said he was scared by the sight of the giant plume on his way home from Dubuque.

“It looked like an atomic bomb had dropped,” Olson said. “I knew it was something big.”

Olson grew up not far from the derailment site and recalled the sound of trains all day and night echoing up the valley. The track has always been busy, he said.

Olson said the area where the rivers meet is a popular fishing spot, and he’s concerned over any effect the oil spill might have on local wildlife. With his father, who was a commercial fisherman, Olson used to catch catfish, crappie and blue gill.

“If you like the country, this is the spot,” Olson said. “It’s pretty remote. They’ve taken care of the brush from when I was a kid, but people still go there and fish all the time.”

Ken Bautsch said the whole town was startled by the incident.

“I couldn’t believe the smoke when I saw it from my house,” Bautsch said.

As a basketball game was on TV at the VFW, Bautsch and Louie Miller were discussing the derailment, saying it speaks to a larger national issue.

“It’s more power to get the Keystone pipeline,” Miller said. “They’re happening all over, not just here. Luckily, no one got hurt.”

“Why does it seem that it’s always the oil tankers that get derailed?” Bautsch asked. “Boxcars carry coal and ore; they never seem to derail.”

Galena has seen a lot of a different sort of visitor the past two days. The Jo Daviess County community popular for tourism has opened its lodges and restaurants to dozens of out-of-town first responders.

Moran said local restaurants have been providing food to responders at the derailment scene.

The American Red Cross is providing canteening services, including water, meals and relief items to the emergency responders, nearby residents and rail company crews.

The accident isn’t having any effect on tourism, because the site is in a remote area and March isn’t peak season, Moran said.

Yet questions remain, and with those, concerns.

“There’s still a lot of uncertainty, even as the facts become more known,” Moran said. “As the scale of this grows, our concern grows.”

BNSF has established a claims center at the Country Inn, 11334 Oldenburg Lane, Galena, to help and assist local residents who may have incurred damage to their property or are in need of temporary relocation. Residents also may call 309-335-2968 for information or assistance.

Workers prepare to go to the Burlington Northern Santa Fe railroad train derailment site Friday near Galena, Ill. Workers used Depot Park area for staging before going to the site of the derailment.

“No oil has reached any waterway,” Andy Williams, director of public affairs for Burlington Northern Santa Fe, said at a Friday briefing. It is unknown how much oil spilled when the cars derailed about 1:20 p.m. Thursday. A total of 21 cars derailed 3½ miles south of Galena.

Jamie Brown of the U.S. Environmental Protection Agency about the three to five feet of frozen ground that seems to be preventing oil from sinking into the soil from the Burlington Northern Santa Fe railroad train derailment.

A Burlington Northern Santa Fe railroad train loaded with shipping containers sits on a side track unable to move because of a derailment south of Galena, Ill.