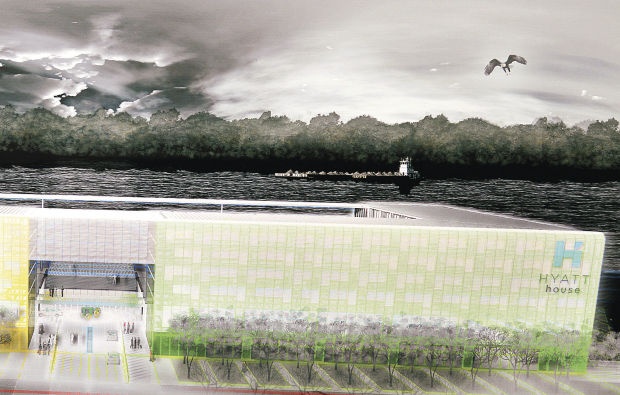 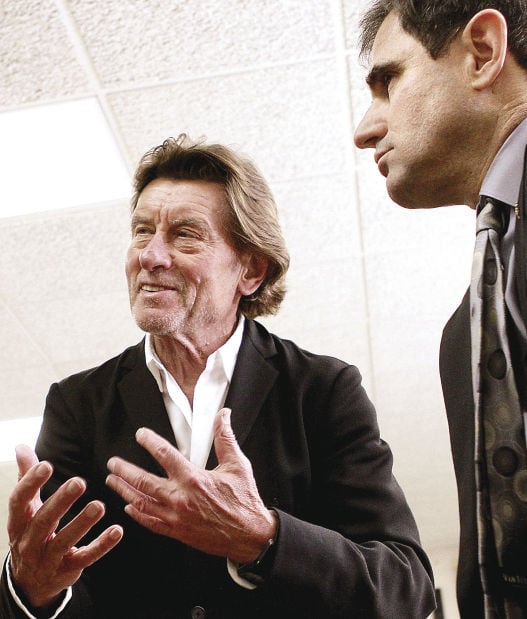 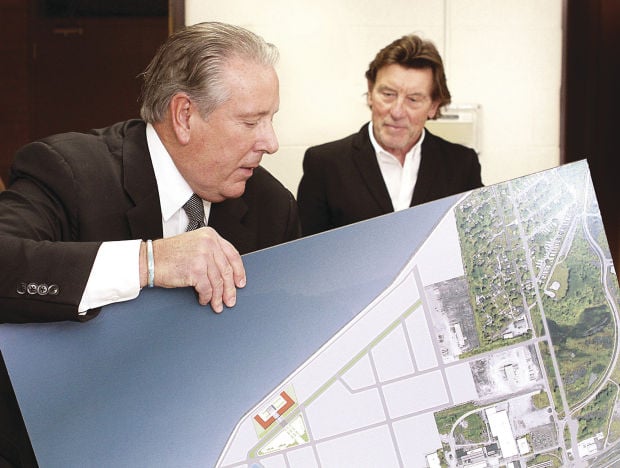 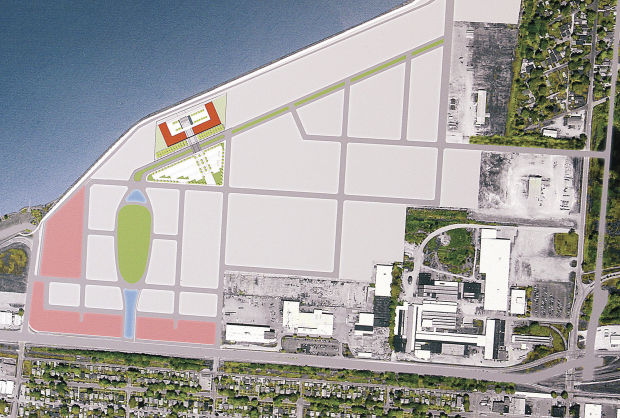 Nearly eight years after the last Case New Holland combine rolled off the production line in East Moline, a well-known Chicago developer has assembled a team of world-class architects to design a mixed-use development for the prime riverfront property.

The $150 million project, known as Fountainhead Quad-Cities, is being developed by J. Paul Beitler and his Beitler Real Estate Services LLC.

The now vacant 130-acre site will be anchored by a 120-room Hyatt Place and a 132-room Hyatt House. The hotels, which will be the first component built, will be designed by world-renowned architect Helmut Jahn.

Flanked by city officials and the property owners, Beitler and Jahn unveiled the development plans at a news conference Wednesday at East Moline City Hall.

“We explored a way to make more than just a hotel; we’re making a place that will make an impact,” Jahn said, estimating construction will take 18 to 20 months.

“This will be the largest single multi-use development in the state of Illinois,” said Beitler, who was selected by property owner River Eagle Investments to develop the project. “I can’t begin to tell you what an exciting project this is — to take 130 acres of empty parcel and go to the best architects in the world … to design and create in anyway they chose. For us, this is a dream come true.”

Beitler said the project also will include a 3ƒ-acre Central Park in the middle of the property. With a bandstand similar to the famous Ravinia Park, located north of Chicago, it could host large-name entertainment and musical productions and other public recreational activities.

Beitler estimated that 2,000 jobs will be created by the total project — including construction jobs and permanent jobs created by all the development’s components.

He said construction will begin with the hotels and the apartments because “you need to have people to support the facility.” Visitors and residents will drive the need for the retail, the sports center and other amenities planned for the site, he said.

The former industrial site is owned by River Eagle Investments, a group of local investors — many of whom are childhood friends. River Eagle is owned by state Sen. Mike Jacobs, D-East Moline, Dan Murphy, Matt Stern and the Bailey VanDeHeede and Luke VanDeHeede Trust. The partners first announced their acquisition and redevelopment plans in December 2010. The former Case plant closed in 2004.

“There are very few places you’ll find 130 acres along the Mississippi (for development),” Beitler said, adding that it will take three to five years to see the entire site built out.

The site has been cleared of hazardous materials, the developers said. It has received the necessary approval from the Illinois Environmental Protection Agency to begin construction.

Jacobs said the development team presented its plans earlier in the day to officials at Deere & Co. in Moline. “Deere was pleased to see what we are proposing,” he said, adding that the group also plans to meet with tourism leaders and other area employers.

East Moline Mayor John Thodos said the city has been working with the developer for more than a year. “The fact that Helmut Jahn got excited to do the Hyatt is really great. And because of the contacts Paul (Beitler) has, all these components are going to have these famous architects.”

Thodos said an issue with the property’s tax assessment delayed the project. River Eagle was taxed at the $6.5 million value that the property was assessed at when Fiat, CNH’s parent company, owned the property and had demolished the old plant. But since the new owners paid $1.5 million to buy it, he said “by law that is what they should be taxed at.”

A new use for the vacant property was welcome news for the city, Thodos said. “The things they’re doing there we’re very excited about. It certainly didn’t happen overnight. We worked very hard for it.”

Developers estimated that infrastructure will begin to go in beginning April 1.

The name Fountainhead Quad-Cities was selected for the site’s location on the Mississippi River, “which acts like a giant water fountainhead supplying the heartland of America with commerce, local and international business and recreation,” Beitler said.

“The glue that will hold each of the beautiful pieces of the puzzle together is the world class architects who have been selected to design the various buildings and landscaping on the site,” he said, referring to them as “starchitects.”

That “star power” will attract visitors from across the U.S. and around the world to visit Fountainhead, he said.

For Helmut Jahn, who has designed notable buildings the world over, participating in the Fountainhead Quad-Cities project is a chance to be pa…