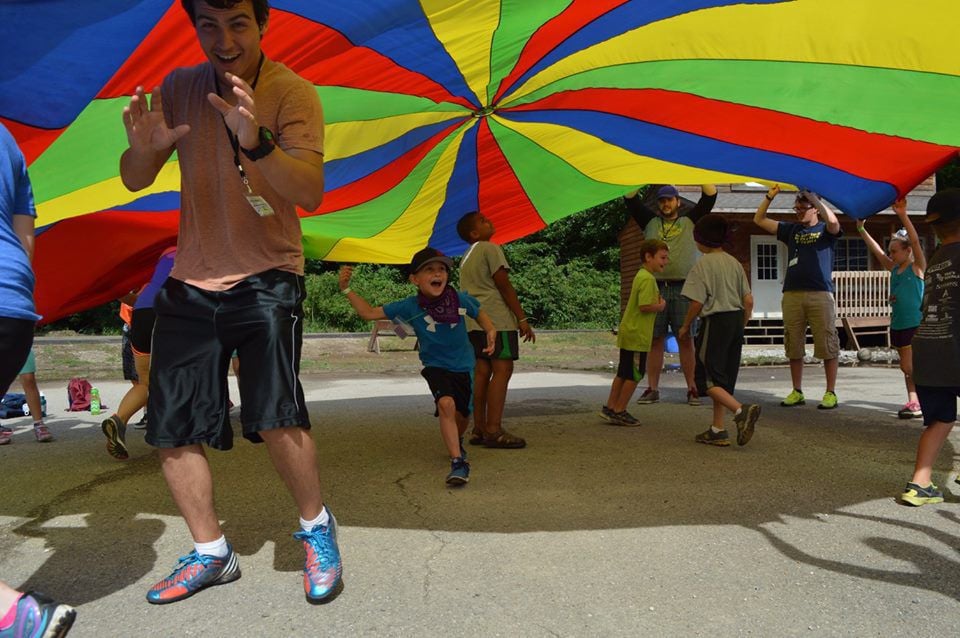 One unit of Camp Kesem enjoys playing under a parachute; this was in the summer of 2016, and a part of the Camp Kesem outreach with the children of cancer patients. Counselors are from Augustana College, Rock Island. 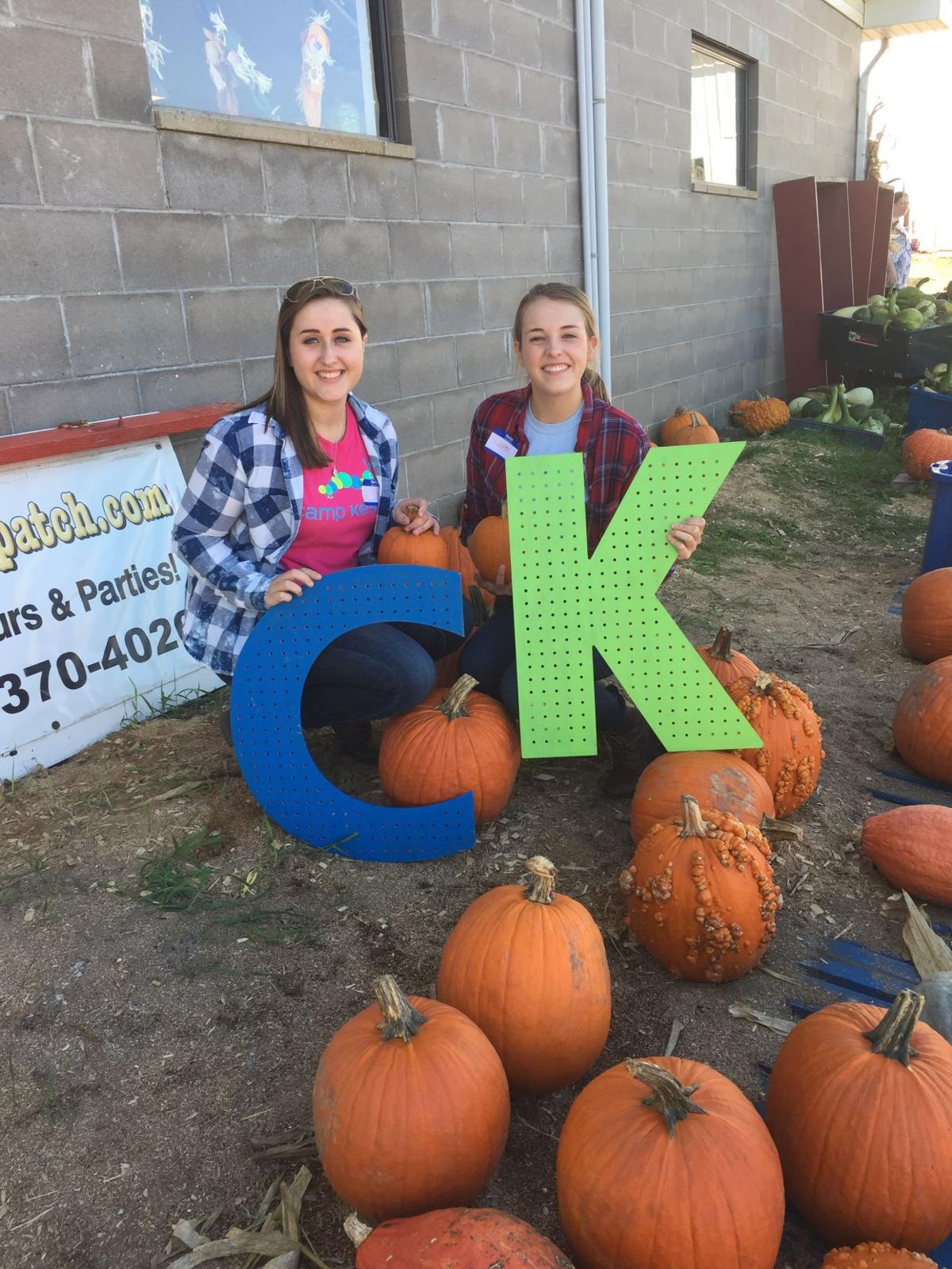 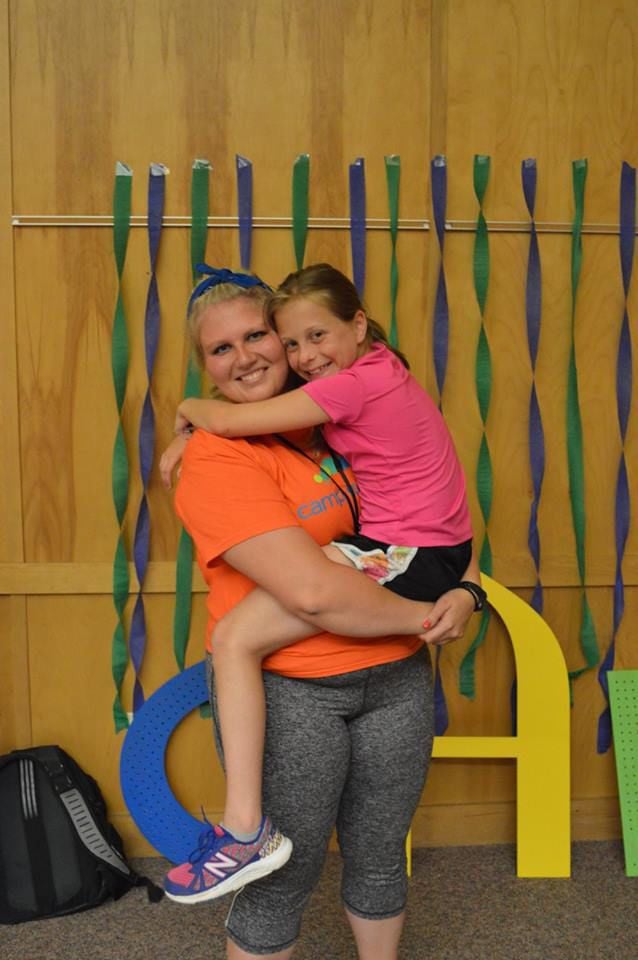 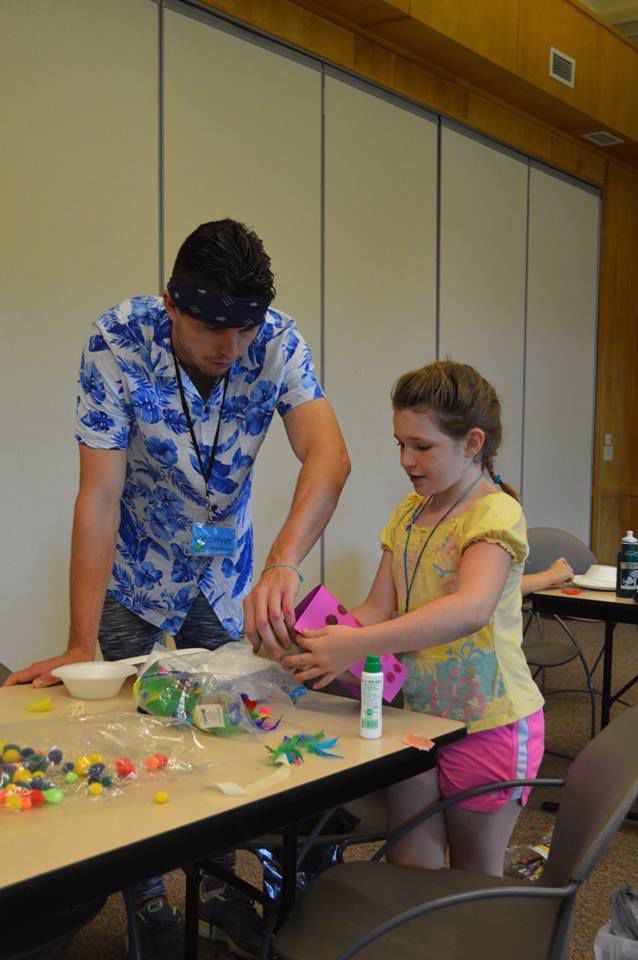 Freestyle and Cinderella, both with fun, made-up names, make a craft at last summer's Camp Kesem, from Augustana College.

These are the 55 counselors from Augustana College, Rock Island, who sponsored Camp Kesem last year in Boone, Iowa. Each is an Augustana student.

Augustana College's Camp Kesem chapter hopes to attract a record 150 children, all of whom have a parent who has been diagnosed with cancer, is being treated for cancer, or has died from cancer. The summer camp is set for July 9-15, 2017.

Michelle Johnson, 21, and Ally Sprengel, 19, are outreach coordinators for Camp Kesem, and both agreed the camp's position has solidified in the past five years, in Quad-Cities and on the Augustana campus.

Camp Kesem was introduced during the 2011-12 school year, by a former Augustana student named Jenna Orabutt. A freshman at Augustana, she drove around the Quad-Cities, trying to explain the camp concept to doctors who treated patients with cancer.

The college student was 9 years old when her mother was treated for cancer. While her mom eventually recovered, Orabutt never forgot the fear she felt.

It took her almost two years to get the camp off the ground, and Augustana's chapter is still almost the smallest — in terms of host college size — in the United States.

Camp Kesem is operated out of 86 college chapters in 33 states, including Ohio State University and the University of Illinois.

Campers are 6-16 years old, and there is a counselor-in-training program for older teens. It is free for campers, but Augustana students are attempting to raise $90,000 to cover the camp costs.

The children take a charter bus to the YMCA camp in Boone, Iowa, where they join children from Des Moines and central Iowa.

No specific grief counseling is offered, but there is wide encouragement to play and have fun. There is time for reflection, Johnson said, during nighttime cabin visits by the college counselors.

Each counselor undergoes an intensive training session before working at the camp.

The children tend to quickly make friends, and the counselors keep everyone busy. Favorite activities: Messy games, Sprengel said, like paint wars; or ga-ga ball, played like dodge ball. There is a rock-climbing wall, a pool and sports facilities.

Johnson, of Homer Glen, Illinois, got involved in Camp Kesem as a freshman. Now, a senior who is applying to graduate school, she is a former Girl Scout who always attended camp in the summer.

Sprengel, 19, of Hoffman Estates, Illinois, also loved attending camps in the summer. Neither girl has had a parent with cancer.

This year, Augustana will seek more than 55 students to be counselors. They will be hired from a pool of 95 or more applications.

Camp Kesem started at Stanford University in 2001. Four student leaders there chose the Hebrew word, "Kesem," because it means "magic."

In the Quad-Cities, Camp Genesis has offered a similar camping activity for children in families affected by cancer.

Through a partnership between the Genesis Cancer Care Institute, Gilda’s Club Quad Cities and Camp Abe Lincoln, 2016 was the seventh year of a free camp for kids, ages 6-16, in this situation.

The Bettendorf School Board is considering five candidates for superintendent, the district announced Wednesday.

'It's a heavier lift than we assumed it might be': State reports positive changes for Davenport Schools, but still a long way to go

Personnel from the Iowa Department of Education said they're pleased with Davenport's progress, but there's still years of work ahead of the district.

MOLINE — Lack of transportation options was a major topic of discussion at an input meeting hosted by the Moline-Coal Valley School District Tuesday.

'We are one Mark Twain': Bettendorf elementary students start 2020 in their new building

One unit of Camp Kesem enjoys playing under a parachute; this was in the summer of 2016, and a part of the Camp Kesem outreach with the children of cancer patients. Counselors are from Augustana College, Rock Island.

Freestyle and Cinderella, both with fun, made-up names, make a craft at last summer's Camp Kesem, from Augustana College.

These are the 55 counselors from Augustana College, Rock Island, who sponsored Camp Kesem last year in Boone, Iowa. Each is an Augustana student.