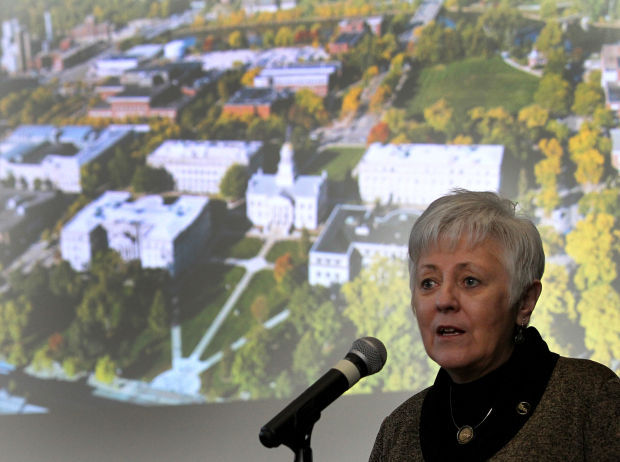 Retiring University of Iowa President Sally Mason talks about some of the university’s achievements Monday to a crowd at the Putnam Museum in Davenport. 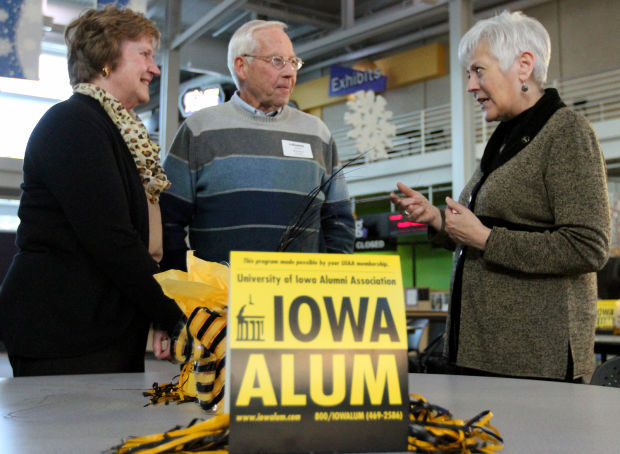 Retiring University of Iowa President Sally Mason, right, visits with Iowa alumni Jim Roseman and his wife, Nancy, of Davenport before her talk Monday at the Putnam Museum in Davenport. 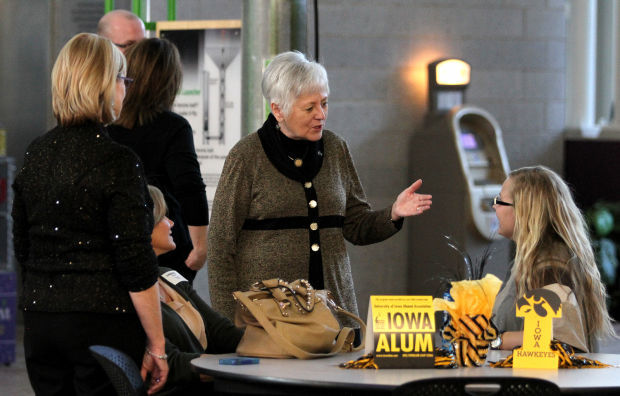 University of Iowa President Sally Mason plans to retire at the end of this year after eight years in Iowa City, nine years at Purdue University and 20 years with Kansas University.

University of Iowa President Sally Mason may be retiring at the end of the school year, but on Monday, she stopped in Davenport to share some Hawkeye history.

In front of about 35 community members and Iowa alumni at the Putnam Museum in Davenport, Mason transitioned from the university's storied tradition of civil rights and the fine arts to the sciences and athletics.

Since its creation in 1847 — 59 days after Iowa became a state — with one building, a handful of faculty members and a few students, Mason said the university has been committed to “making life better for people throughout the state … and ahead of the curve when it comes to treating people fairly and equal.”

In 1879, 40 years after the state abolished slavery, Iowa became the first public university in the country to grant a law degree to a black man, Muscatine’s Alexander Clark Jr.

Almost a century later, in 1958, the university was recognized for its help in producing the country’s first earth satellite, Explorer-I. University physics professor James Van Allen, who died at University of Iowa Hospitals and Clinics in 2006, designed and built Explorer-I's instruments.

“We have a history in outer space that parallels none,” Mason said. “We aspire not just to Iowa excellence, but to world excellence and service.”

Mason also pointed to the work being done on campus along the banks of the Iowa River at the C. Maxwell Stanley Hydraulics Laboratory, which helps communities “understand, manage and prepare for flooding.”

Davenport resident Jim Roseman, who graduated from Iowa in 1967 with a bachelor’s degree in civil engineering, has his own memory of the Stanley Hydraulics Lab. One semester, the 71-year-old said, he spent every Friday afternoon in the lab.

“Everyone was getting ready for the weekend, while we were in there for our hydrology lab,” Roseman said with a laugh.

But it paid off, Roseman, 71, said. He put his degree toward a 38-year career with Iowa-Illinois Gas & Electric Co., known today as MidAmerican Energy.

During her hour-long talk, Mason made sure to mention a piece of the university’s history that made it to the Quad-Cities.

For nearly three years, Jackson Pollock’s famous “Mural” stood as a resident of the Figge Art Museum in Davenport, before heading to Des Moines.

In 1951, Peggy Guggenheim gifted the university with the painting, which soon will head on a European tour.

“More Iowans have seen Pollock’s original painting than most, and now we're going to take it to rest of the world,” Mason said.

Iowa also became the first university to offer a master of fine arts degree, thanks to Iowa native Grant Wood, an artist known for his Midwestern landscapes, who taught at the university from 1935-42.

Following her speech, Mason said sharing the university’s history is fun and will “remind me of what I’m going to miss” when she retires.

As for post-retirement plans, Mason, who spent 20 years at Kansas University and seven years at Purdue before arriving in Iowa City, said she hasn’t planned that far ahead but is looking forward next week to spring break and March madness.

North Scott school board announced member Glen Keppy's resignation due to health-related reasons on Monday, vacating the seat he held since 2013.

In the Iowa Quad-Cities, home to one of the state's largest public school districts and to 10 private schools, reactions to the governor's Stu…

A proposal for state-funded savings accounts for Iowa parents to pay for private school would cost the state roughly $345 million annually once fully implemented, according to a nonpartisan fiscal analysis released Monday just hours before lawmakers began voting on the proposal.

Technology is making it easier to bust bad restroom behavior.

This profile on Augustana sophomore Johana Gonzales is the second in an eight-part series, featuring Quad-City area college students' perspectives on the fall 2022 semester.

The Illinois State Board of Education (ISBE) is preparing 10,805 future teachers in high schools across the state through their Education Career Pathway Grant initiative, which aims to increase diversity in the state's teacher workforce by exposing students of all backgrounds to teaching experience.

Tenure ban shelved again, but more reviews may be proposed

DES MOINES — A legislative proposal to prohibit Iowa’s public universities from offering tenure to faculty once again will be shelved.

Western Illinois University's student body from Caribbean nations continues to grow, with over 150 students now enrolled and approximately 125 additional prospects for next year.

Retiring University of Iowa President Sally Mason talks about some of the university’s achievements Monday to a crowd at the Putnam Museum in Davenport.

Retiring University of Iowa President Sally Mason, right, visits with Iowa alumni Jim Roseman and his wife, Nancy, of Davenport before her talk Monday at the Putnam Museum in Davenport.

University of Iowa President Sally Mason plans to retire at the end of this year after eight years in Iowa City, nine years at Purdue University and 20 years with Kansas University.