Described as dark and beautiful, the 16-year-old Maria was barefoot, wearing jeans and a blouse when she last was seen. 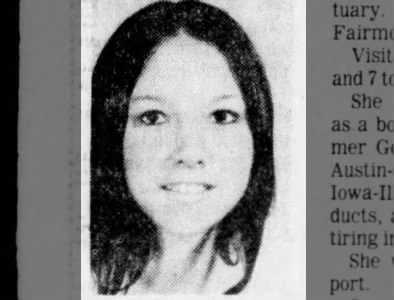 For nearly 4½ years, there was no trace of Maria.

On Nov. 5, 1977, hunters out for the first day of pheasant season came across a human skull in a ditch near New Liberty in Scott County. Authorities were called and the rest of the skeleton was exhumed and taken for examination.

For two months the mystery surrounding the skeleton was at a standstill until law enforcement officials enlisted the aid of the media in the investigation. A photograph of three rings — an ankh, a friendship ring, and a thunderbird design — was put in the papers.

It was a former boyfriend of Maria’s, Dean Hunt, who solved the mystery of the skeleton when he recognized the rings on Jan. 24, 1978. Dental records confirmed the skeleton belonged to Maria.

Authorities also determined it was a homicide. While at the Smithsonian Institution in Washington, D.C., where the skeleton was undergoing an examination by a bone expert, evidence was found of cuts at the rear of a neck vertebra that might “suggest force applied to the throat.”

As long as seven months after the girl’s skeleton was found, Scott County Sheriff’s investigators worked to solve the case, according to a Quad-City Times story by Rick Jost published June 26, 1978.

Investigators at that time said they dug up and sifted through the soil where Maria’s remains were found. They also interviewed about 50 or 60 of Maria’s friends, neighbors and acquaintances.

“We have suspects,” said Capt. Dale Hackett, the head of the Scott County Sheriff’s Department’s investigation division, said at the time. But they didn’t have proof.

“We’re waiting for somebody to come forward, somebody who may have heard a perpetrator make a statement, or saw something happen,” Hackett said. “Really, right now we don’t have anything linking the death to a suspect.”

Maria was in a foster home at the time of her disappearance, living away from her parents, Kathryn and Bernardo Ybanez, then both of Davenport, “because she and her father did not get along,” Kathryn Ybanez said, according to Jost's story. Kathryn and Bernardo, were divorced. Bernardo died in 1999.

According to news sources, Maria wanted to get back with her family.

Bernardo Ybanez told the Times that the last time he saw his daughter was in 1973, when she lived with him at his house for three days. He said she left after someone who claimed to be with the Iowa Department of Social Services called her and told her she had to move out.

Hackett said at the time that while investigators did not have a cause of death, it was clearly a homicide.

“It was the fact that the hands apparently had been tied behind the back with a man’s belt,” he said. “And the girl, she was probably buried in the ditch."

Erosion and run-off from rain probably are the reasons the bones were found, Hackett said.

Anyone who has information is asked to call the Scott County Sheriff’s Department at 563-326-8625.

Note: According to a Denver Post article published Feb. 20, 2006, by then Post writer Miles Moffeit, family members alleged Bernardo Ybanez was an alcoholic and abusive father who sexually abused Maria, as well as abused his wife and other children. Bernardo Ybanez was suspected of killing Maria but was not charged, the family said, according to the story. Moffeit’s story details the abuse taken by Nathan Ybanez, Bernardo’s grandson, at the hands of his parents, Roger and Julie Ybanez. Roger Ybanez is Bernardo’s son. Nathan killed his mother after a lifetime of physical abuse but that information did not come out at trial. Nathan is serving a life sentence in Colorado. There are movements to have him and his accomplice, Erik Jensen, set free.