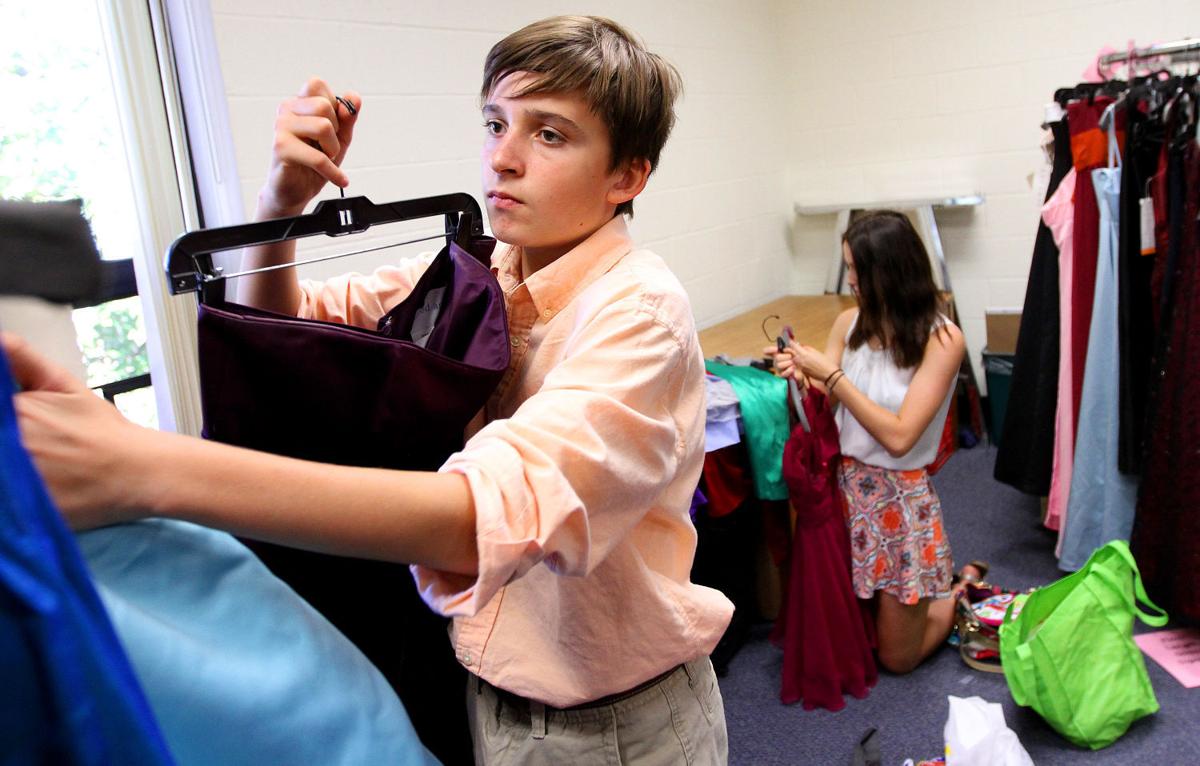 Liam Haskill, 13, hangs dresses on a rack while sister Amy puts the dresses on hangers for a give-away at Trinity Lutheran Church in Moline. 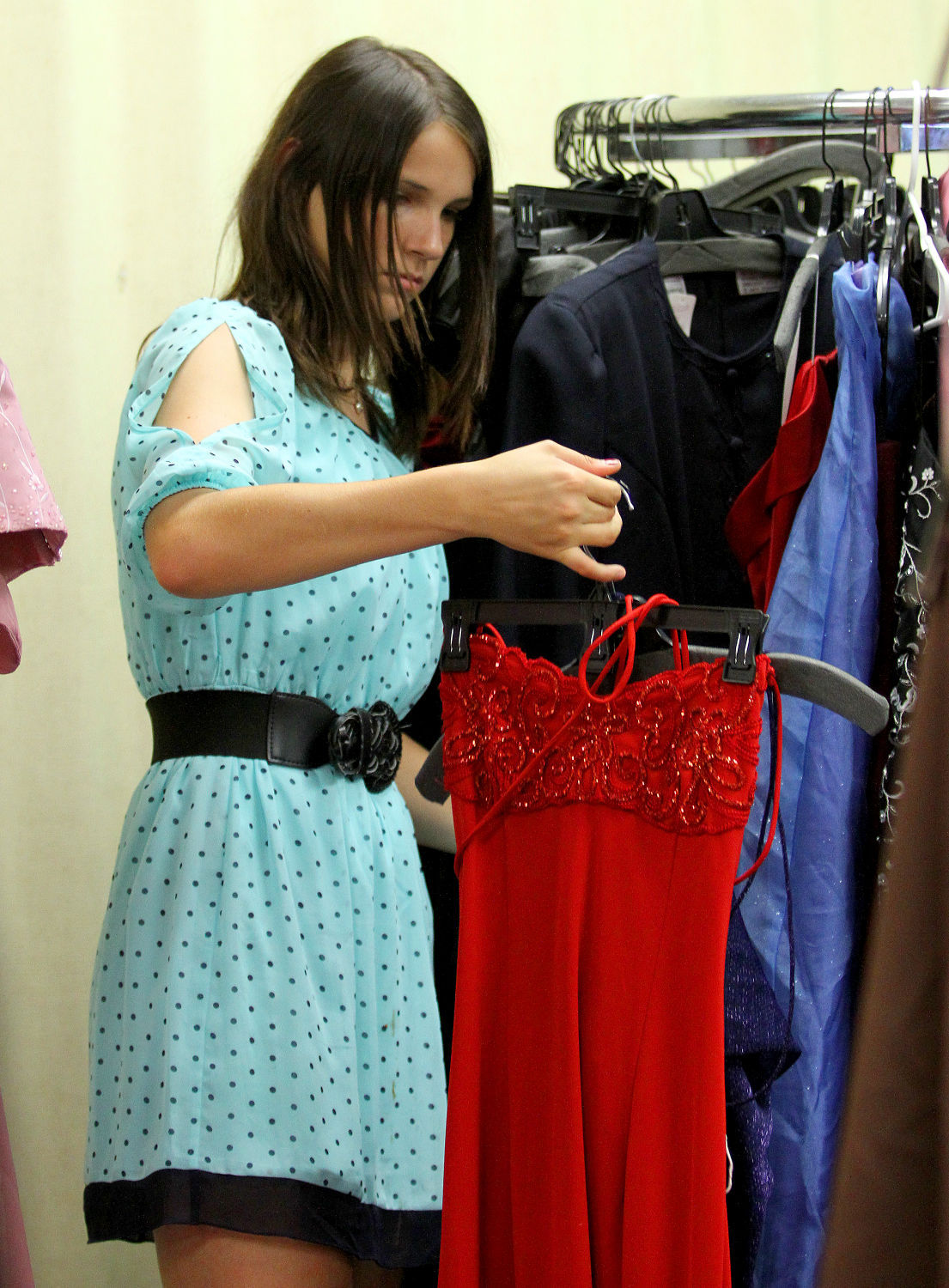 Amber Haskill hangs donated dresses on a rack for a give-away at Trinity Lutheran Church in Moline. She and her twin sister, Amy, have begun an organization to help children in the foster care system, which they were part of for many years. 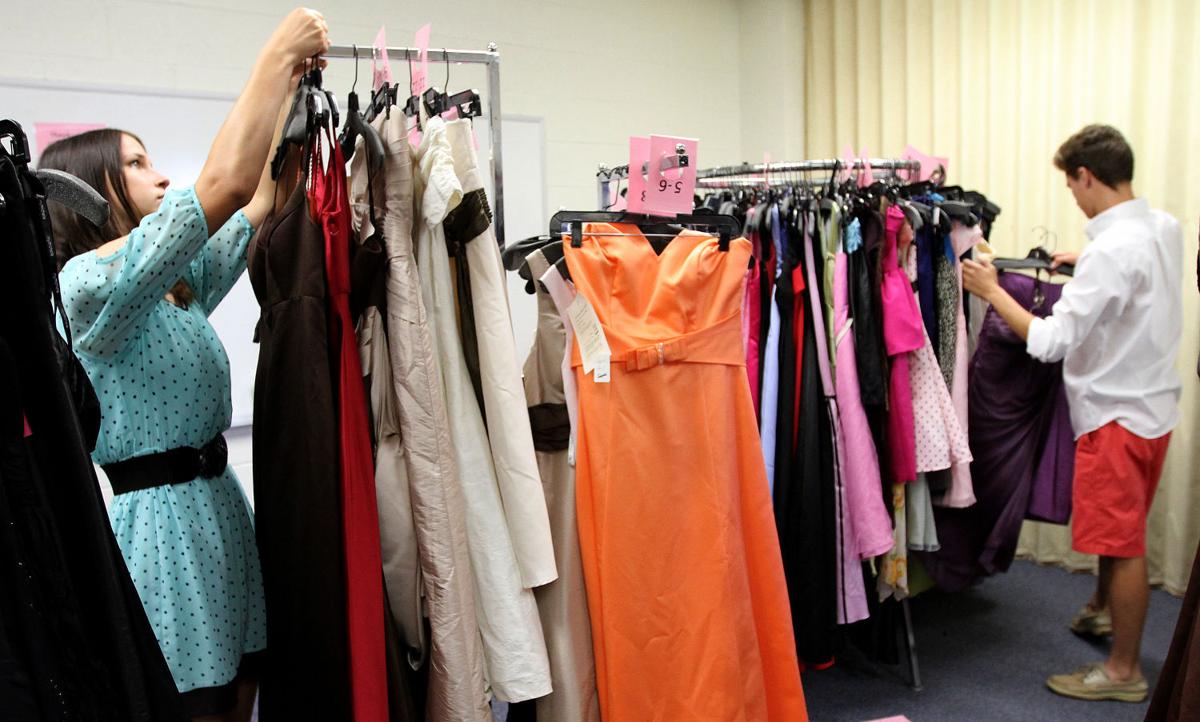 Amber Haskill and her brother, Logan, hang formals on racks for a give-away at Trinity Lutheran Church in Moline. 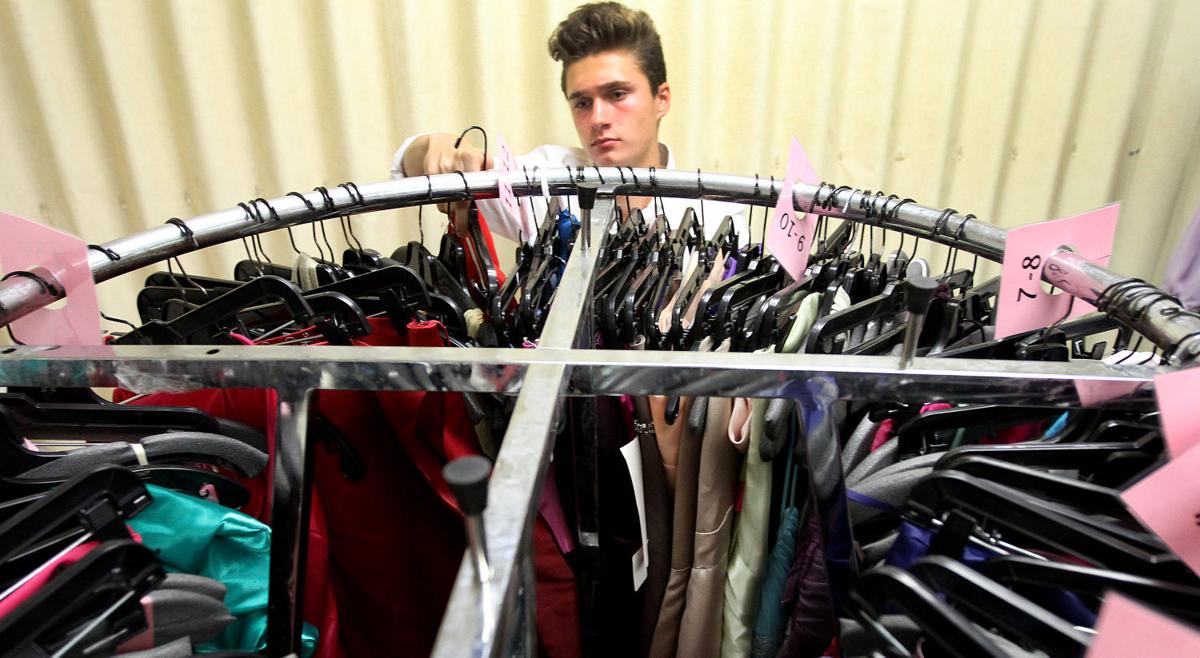 Logan Haskill, 15, arranges dresses by size for a give-away his sisters and his family organized  at Trinity Lutheran Church in Moline.

As a foster child who bounced around to 11 different homes, Amber Haskill remembers feeling out of place wherever she went.

“I would get picked on for what I looked like, because of the clothes I wore,” Amber, 14, of Rock Island, said. “So, I wanted to look nice. I wanted to fit in, and there are a lot of other children who do not fit in.”

Her twin sister, Amy Haskill, said they didn’t have clothes or shoes frequently in their difficult journey of separation and rejection.

“When you are moving around, oftentimes that person doesn't get to keep anything,” Amy said. “You just go to the next home with nothing.”

“When I came here to Rock Island, I came with nothing but the clothes on my back,” Amber said.

After years of separation, the twins were reunited and adopted by Alli and Dan Haskill, and they knew quickly that they wanted to help other children in foster care.

About two years ago, Amy and Amber started Q-C Closet2Closet, a program that provides free clothing to foster kids age 10-18 throughout Illinois.

Clothing is donated and then distributed periodically through referrals from schools and agencies that work with children in the foster care system.

They have a storage unit to house the apparel, which they launder at home with the help of their family. They also have given away more than 450 care packages consisting of toiletry items, new socks, underwear and other personal items.

For their efforts, the girls recently were named citizens of the year by the city of Rock Island.

Amy and Amber were born in Little Rock, Ark., the youngest children of six born to their biological parents. Later, the family moved to Lincoln, Ill.

“Our parents couldn't take care of us,” Amy said.

“I remember looking for some food at home, and all we had was a box of Cheerios. That was the only thing I saw,” Amber recalled. “And I remember when I was outside, I never had shoes on.”

When the twins were about 5, all six siblings were placed in foster care.

“When we reached the foster care system, we all got split up.” Amy said.

Initially, they had regular visits with their parents, but those dwindled over time.

”Our dad stopped coming, and our mom gave up parental rights when we were 11,” Amy said.

After living with various families, Amber began living with the Haskills and their sons, Logan, now 15, and Liam, now 13, in Rock Island.

“They were the first parents I actually called Mom and Dad,” Amber said.

But Amber said her new family initially was unaware that she had a twin sister. The separation was awful.

“When I wasn't with my sister, I was lonely,” Amber said.

“When a family is taken away, it is like saying goodbye,” Amy said. “I didn't know if I would see her again.”

“She lost hope, but I never lost hope,” Amber chimed in with a big smile.

Getting the twins together took time and a lot of effort.

“Amy was living with another family at the time,” Amber said. “I kept saying that I wished I could have my sister with me. But my parents didn't know I had a twin at the time.

“I remember when my dad heard about that, he said, 'Why would anyone want to separate twins?'"

Amy was with a loving family who wanted to adopt her. It was her sixth foster home.

The matter eventually was decided in court, and the Haskills had their twin daughters. That was almost four years ago.

Alli Haskill, a speech pathologist at Augustana College, Rock Island, said the girls grew fast. They turn 15 on Sept. 29, and they are 6 feet tall. She said that meant they have quickly outgrown clothing and shoes.

When the twins asked what would become of their outgrown clothing, Alli mentioned resale shops. But the girls came up with the concept of giving their clothes to kids in the foster care system.

“We wanted to give back to the foster care system,” Amy said. "We wanted to have a charity for foster kids our age."

They now have quarterly shopping days when case workers and foster parents come with foster kids to receive clothing and care packages. The family's church, Trinity Lutheran Church in Moline, provides a room for shopping days.

The next shopping day is Saturday.

Through the Center for Youth and Family Solutions, a Rock Island agency the Haskills used in the adoption process, items have been distributed to central and south central Illinois as well, said Monica Kindig, assistant director of child welfare and intact services for the agency. She personally has taken dozens of carloads of clothes and packages to the agency's offices in Springfield and Lincoln, Ill., over the past year.

“I know the children are very appreciative,” she said. “So are the case workers. Often, kids in foster care can be overlooked."

She also had praised for Amy and Amber. "The girls are absolutely incredible, and the parents need credit, too. It is so refreshing to see younger people doing something so positive.”

“Closet2Closet first started as one of my daughter’s dreams,” said Dan Haskill, manager, export operations for World Wide Service Parts, Deere & Co. “I viewed it as a way to repay some of the debt that I feel I owe the foster system for bringing my daughters into our lives, a debt I feel I will never be able to fully pay off."

All the attention is a bit awkward for the girls, they said. They want the attention to focus on the foster kids receiving help. They also want to thank everyone who has made it all happen.

“It has been a blessing of supporters to help us, like my family,” Amy said.

Even their brothers are involved.

“I help talk to organizations and groups about our organization,” Liam said. “It was a long process (adoption). It has been very interesting, a long journey. We never had sisters. But it is so nice to have sisters.”

Closet2Closet holds shopping days for foster kids on a quarterly basis. The next shopping date will be from 9 a.m. to 1 p.m., Saturday, Sept. 26, at Trinity Lutheran Church's Faith Hall, 1330 13th St., Moline.

Foster kids can just show up with either a foster parent or case worker with proof that they are in the foster care system. Q-C Closet2Closet works closely with foster agencies, social workers and school counselors on both sides of the river to gather referrals.

The Haskill family has been selected as Leadership Family of the Year, presented by Bethany for Children & Families. The award honors a fa…

Liam Haskill, 13, hangs dresses on a rack while sister Amy puts the dresses on hangers for a give-away at Trinity Lutheran Church in Moline.

Amber Haskill hangs donated dresses on a rack for a give-away at Trinity Lutheran Church in Moline. She and her twin sister, Amy, have begun an organization to help children in the foster care system, which they were part of for many years.

Amber Haskill and her brother, Logan, hang formals on racks for a give-away at Trinity Lutheran Church in Moline.

Logan Haskill, 15, arranges dresses by size for a give-away his sisters and his family organized  at Trinity Lutheran Church in Moline.