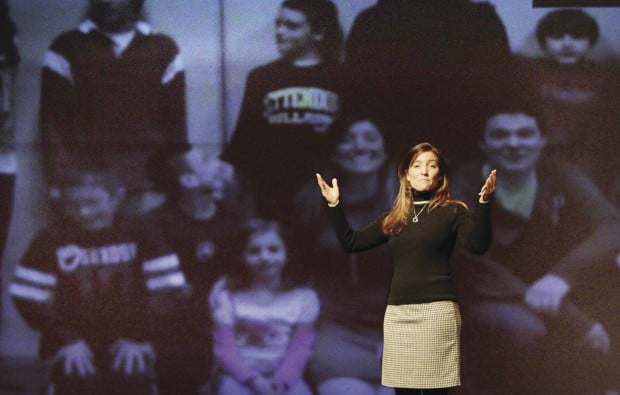 On stage Monday at the Nighswander Theatre in Davenport, Kiim Furness introduces work done by students in the acting class for autistic youth that she co-founded. (Kevin E. Schmidt/QUAD-CITY TIMES) 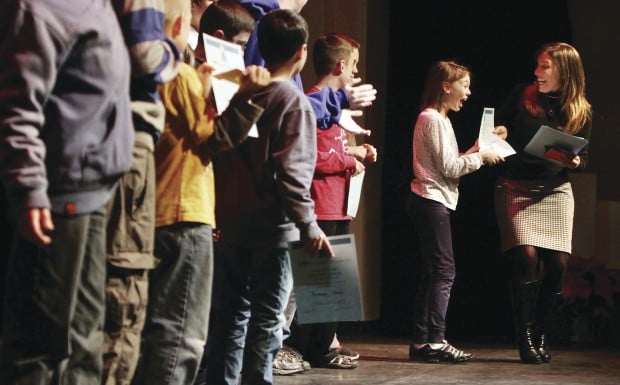 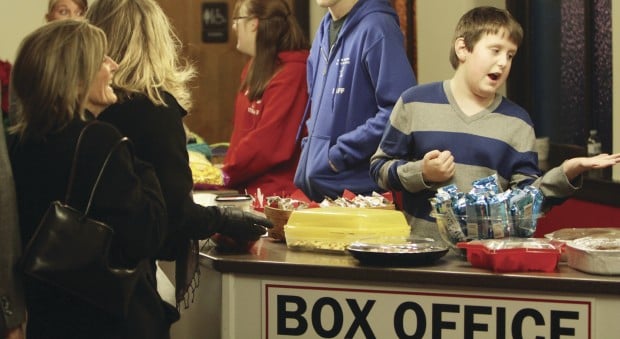 Inside the Nighswander Theatre in Davenport on Monday night, 10-year-old Camden Conner was a one-man cheerleader for Kim Furness.

“I hear you’re going to L.A.,” Camden told Furness, who co-founded and teaches a theater class for autistic youth through her Curtainbox Theatre Company.

“That’s a huge, huge, huge accomplishment!,” he told Furness, who moved back to her hometown in 2005 after working in movies, TV and stage in Los Angeles. Since then, she has acted and directed in a number of theater projects in the Quad-Cities, as well as continuing her own theater company.

Camden has been in the past two sessions of the class.

“My mom said I had actor qualities so I signed up for the class. At first I wasn’t that excited, but I really enjoy doing it,” he said.

Furness co-founded the program nearly three years ago with speech-language pathologist Julia Jergens as a way to involve autistic students. Her final set of students, 13 of them, took bows Monday night after a showing of mock “movie trailers” made by the group.

Furness, 41, told the audience of students and their parents that she was going to move back to Los Angeles for projects she said she wasn’t ready to reveal. She also recently has taken a role as casting director and production coordinator at FliXpress, a new Quad-City ad agency.

“I have too many projects that are happening right now. I want this program to continue to grow in a way that I don’t have the time or the means,” Furness said before the program, where parents were told of plans to move the program under the umbrella of Davenport Junior Theatre.

“Junior Theatre has so many things at their disposal. They’ll grow this in a way that would have taken me so much longer,” said Furness, whose acting career began there as a child. She was also a teacher for six years and president of the board of directors for five.

Daniel DP Sheridan, director of Davenport Junior Theatre, will begin to teach the classes in January. There will be a few changes —Thursday night rehearsals instead of Mondays, a 12-week course instead of 10 (for the same price), and expanding the program in the future to include other aspects of theater.

“It’s too important not to continue,” Sheridan said. “Junior Theatre has the capacity to continue to grow it, take it further than it is right now.”

Furness said she’d always check in on the program in frequent return visits to the Quad-Cities.

After awards were presented following the trailers Jennifer Littrell, East Moline, gave Furness a going-away present — a group picture of her students and their teacher, embossed on a sofa-size throw.

Littrell said her 10-year-old son, Harrison, has made amazing improvements that she credits to the program. It’s now easier for him to make friends, make eye contact and talk in front of people.

“Useful everyday skills,” she said of her son, who was excitedly hawking baked goods, bottles of water and programs before showtime. “He loves being in front of people and telling jokes — being the star.”

Accepting the throw, Furness said the program had started during a “sad place” in her life.

“I cannot tell you how much they have done for me,” she said, choking back tears. Addressing the student actors, she said “You guys made me smile and laugh every Monday. I will never, ever, ever forget that.”

Few feel the pandemic pressure more than those trying to save their restaurants and bars, pay employees, feed their families and pay their bills.

The resentment, for now, rests on the fringe.

A 20-year-old Moline man on probation in Rock Island County is charged with first-degree murder after stabbing another man to death Tuesday, M…

Reynolds to announce an initiative to recruit more nurses

On stage Monday at the Nighswander Theatre in Davenport, Kiim Furness introduces work done by students in the acting class for autistic youth that she co-founded. (Kevin E. Schmidt/QUAD-CITY TIMES)