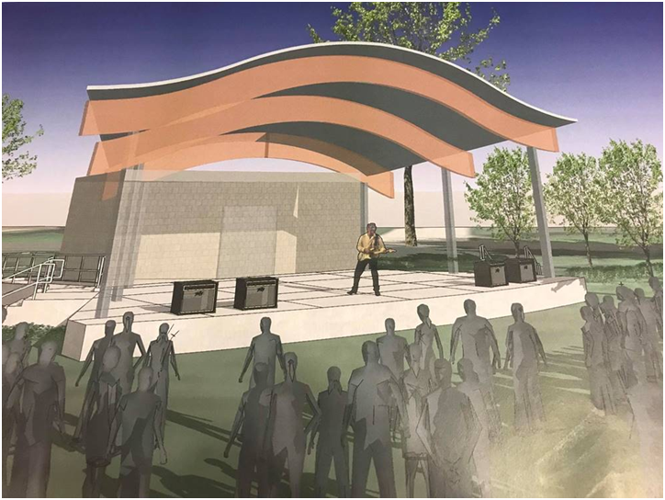 A rendering of the planned permanent stage for Wiley Park, Galva. 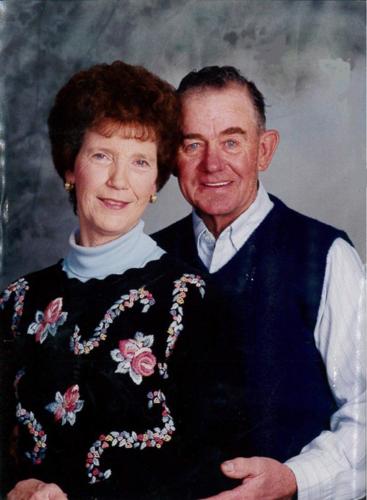 Kyle Doss and his wife, Joan.

GALVA — Jane Doss, owner of Galva-based Preferred Home Health Care, is at the top of the Monday agenda for the city council meeting, to present the city with a check for $100,000.

Doss wants to accomplish two things with her donation: build the stage in Wiley Park to accommodate the Levitt-AMP summer concert series and other community events and leave a memorial to her parents.

Her father, Kyle Doss of rural Cambridge, died in 2011 at age 82, and her mother, Joan, lives in a memory-care unit.

“They always went to the park to listen to music,” Doss said this week of growing up in Henry County. “They looked forward to that.”

She's attended many of the free concerts in Wiley Park over the past two summers and appreciates how it has brought families together. “That’s incredible that Galva can continue to bring the concerts here. I’ve been so impressed.”

“I thought it was something my parents would truly love. It has been re-stimulated,” she said.

For the third year in a row, the Mortimer & Mimi Levitt Foundation named Galva as one of 20 small to mid-sized towns and cities across America to win a $25,000 Levitt AMP grant of matching funds for a free concert series at Wiley Park. The Galva Arts Council submitted the proposal.

Since people bring their lawn chairs to concerts, Doss has asked local fabricator John H. Best and Sons to make two permanent lawn chairs with memorial plaques for her parents, to be set on the side of the new stage.

“I’m really excited for them to have it,” she said. “I’m married to Rich Bell from Bell Trucking, so I know what they go through for temporary staging. This is something I could leave behind for my parents.”

Her pediatric home-care business has 1,500 employees, and serves families in Illinois, Iowa, Missouri and Oklahoma, growing significantly in recent years.

“Most of our children are critically ill; we take ICU units to the home,” Doss said, noting she assists children both before and after surgeries. “We provide services for neonatal to long-term disabilities, accidents, burns, etc. We have many ventilator dependent children. The business has grown tremendously.”

"Dave Dyer is a great man to work with; he takes good care of us," she said.

"She’s a good corporate citizen," Dyer said of Doss. "This is a generous gift. The city is grateful for the concert series. We've had a temporary stage, but with this series, it was in need of an upgrade."

"Jane’s donation and an anonymous donation will cover the entire cost," Dyer said, noting the city budgeted $25,000 of its own for the project, and city workers will provide labor. A Galesburg engineering firm has donated the design and engineering for the stage, Dyer said.

"I’m just amazed by it," he said of the concert series, and the economic benefit it's provided the town. "We’re the only all-volunteer municipality for the Levitt AMP grant, which is a tribute to the team (concert organizer) John Taylor has put together. The Galva Arts Council is all volunteer."

“These concerts are magic,” Taylor, president of the Levitt AMP Galva Music Series, has said. "Call me a dreamer, but when people begin to feel like they belong, feeling loved and supported without fear, it opens up the door to living a fulfilled life. For some people, the communion and fellowship of live music can create this, especially when that is the intention.”

The grant program required community participation to get as many online votes as possible to bring the concert series to town. "That says a lot about the support by people here," Dyer said.

For the third year in a row, the Galva Arts Council has won a $25,000 matching grant to bring a free live-music series to Wiley Park.

GALVA — The city council approved plans in July for a permanent stage to be constructed at Wiley Park, but inclement weather has delayed break…

A rendering of the planned permanent stage for Wiley Park, Galva.

Kyle Doss and his wife, Joan.