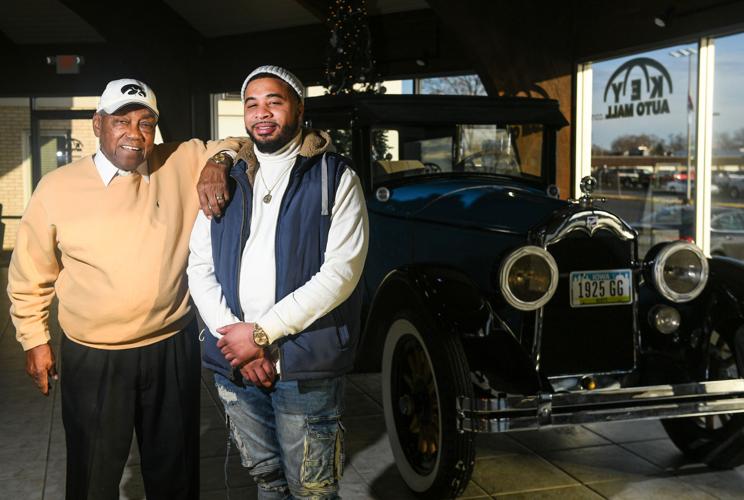 George Greer and his grandson, Chris, moved their restored 1925 Buick Master 6 Model 40 into the Key Auto Mall showroom to share it with the wider public. 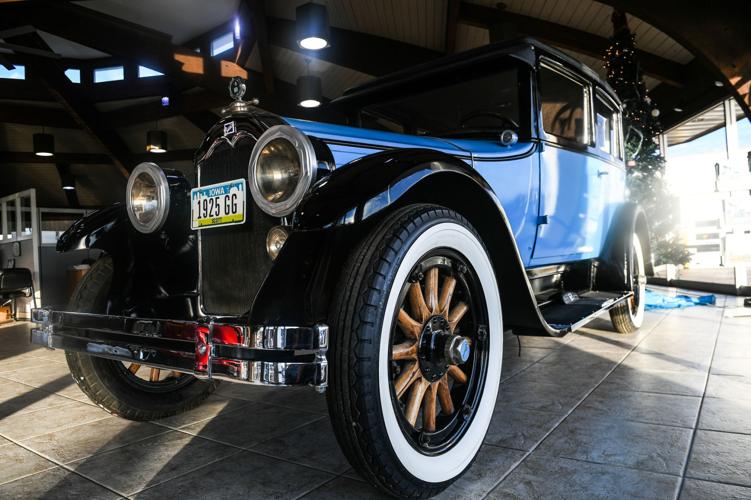 George Greer always had a hustle. And a story.

His most-told tale always starts in the same place: Once upon a time he was a kid without a father who lived with grandparents in a place called Belfast in rural Tennessee. There was no electricity or running water in the house.

The legend has appeared at least twice in The Quad-City Times, as well as publications in Florida and Tennessee.

Yet there is one person who listened to every "George the Trapper" story no matter how many times George, 87, told them. Christopher Greer is 30 and George's grandson. Christopher always admired George, saw him as a mentor. They are partners these days.

"It's all true," Christopher said. "I think a lot of people think self-made men like George just kind of shade the stories a bit. Not George. Ever since he was little he saw opportunities. He hustled — and that's what real entrepreneurs do; they see every person you meet as a chance to make a connection.

"That's why George tells those stories. He wants to connect with people."

Christopher talked about his grandfather while sitting inside the showroom at Key Auto Mall in Moline. The duo moved a restored 1925 Buick Master 6 Model 40 into the showroom to share with the wider public.

Later, as George chatted up a Key salesman, Christopher tried to pull apart the reasons he feels so close to his grandfather.

"OK, we don't talk about this much. My father spent 21 years in prison. He was always my father, and I always saw him, and we are close in our way," Christopher said. "But I didn't have my dad physically there. George was around and spent time with me.

"It was me and my mom until she got married again, and I did everything I could to make money. I shoveled snow, sold jeans. When I was 10, I started working at Jim's Repairing. I took any job that would take me."

Christopher has hustle. But he first made newsprint for a non-violent drug crime that cost him a year in jail.

"I hadn't really learned what George is really saying with his stories," Christopher said. "My grandmother, Tracey Greer, that was George's third wife, she died three months after I got out.

"I wanted to be there for George. The part about George not knowing his father's name. It's true. I started to think about the opportunity I had to learn from my grandfather. That changed things for me."

These days Christopher is poised to open a barbershop and continues to help George.

"I'm my own person," Christopher said. "I can't do everything George did, but he's shown me a way to go about life and business. Be honest. Work hard. George is getting older. I know what's coming, and it scares me. So I listen and try to learn as much as I can."

George is a tough act to follow and possesses the resume of a real self-made entrepreneur. He earned a college degree before working for the Alter Company as an analytical chemist, then he moved on to manage his own office-cleaning business.

Ever the opportunist, George developed a biodegradable cleaning solution and mixing system and marketed it to urban transit companies for cleaning interiors and exteriors of buses. Along the way he founded the Greco Company.

In the early 1990s, he retired and helped Tracey establish APEE Ltd. to manufacture Greco products and equipment.

Remembering the days of cleaning buses, George recalled one of his most successful ventures.

"It was 1968 and I was in Galesburg, Illinois," George said. "I was standing on the street and a woman riding this adult tricycle rode by. I had never seen a bike like it.

"I asked her, 'Why don't you take a bus? You're out here on a tricycle in the middle of traffic.' She told me 'The buses are too dirty.' That started it. I went to the city, then I went to the bus garage, and by the end of the day I had a contract to clean the buses in Galesburg."

"Christopher, he's my grandson and good friend," George said. "He's heard it all from me, but he keeps listening. I always tell him that the harder I worked, the luckier I got.

"You just have to be honest. And you have to help people whenever you can."

A 39-year-old woman accused of stealing almost $4,000 from Elevate Trampoline Park in Davenport has faced similar charges before.

The Happy Joe's restaurant at 2630 Rockingham Road in Davenport has closed.

A man who was sentenced to more than six years in federal prison in a scheme to sell unlicensed drugs, claiming to treat or even cure the term…

'He did not deserve to be murdered,' says mother of man killed by Scott County Deputy

Holidays are hard for Patty Thorington. Thanksgiving, Christmas, birthdays — gathering with family just reminds her that her son isn't there.

East Moline has been awarded $23.7 million from RAISE grant to help make infrastructure improvements that will connect downtown all the way to the Rust Belt.

Ty'Ollie Bright, 22, of Davenport, lost control of his 1998 Toyota Corolla, struck a guardrail on the west side of the roadway and rolled several times before coming to a rest in the west ditch. The passenger was a 14-year-old relative of Bright's who is also from Davenport. Both remain hospitalized with life threatening injuries.

From surviving to thriving: New owners at ESCP triple employment, sales in 2 years

ESCP has been in the Davenport community for years. In 2020, new owners took over and grew the company from 23 employees to 68.

There was a shooting about 9:24 p.m. Tuesday at the Davenport Skatepark. The victim, a 19-year-old man, has died of his injuries.

The name of the man killed Friday morning in a vehicle collision near Colona was announced Saturday by the Illinois State Police.

Gas prices fall below $4 per gallon

Gas prices fall below $4 per gallon

George Greer and his grandson, Chris, moved their restored 1925 Buick Master 6 Model 40 into the Key Auto Mall showroom to share it with the wider public.