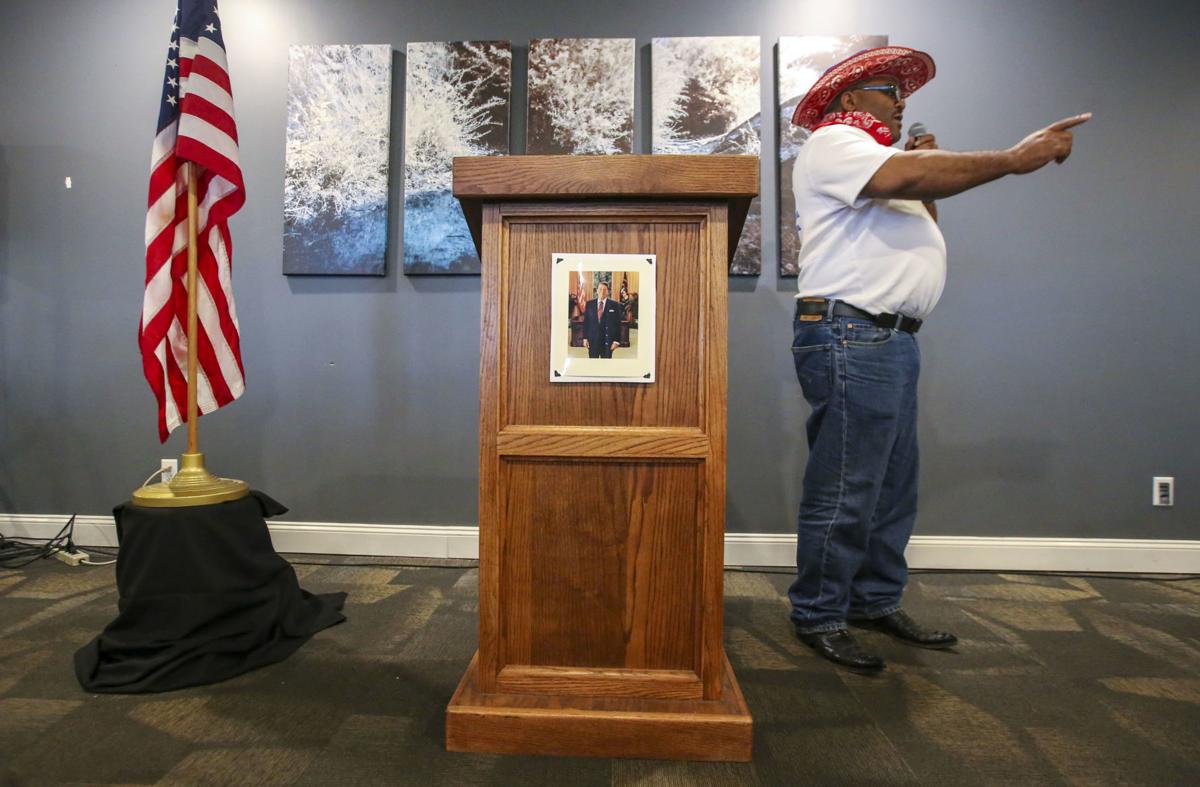 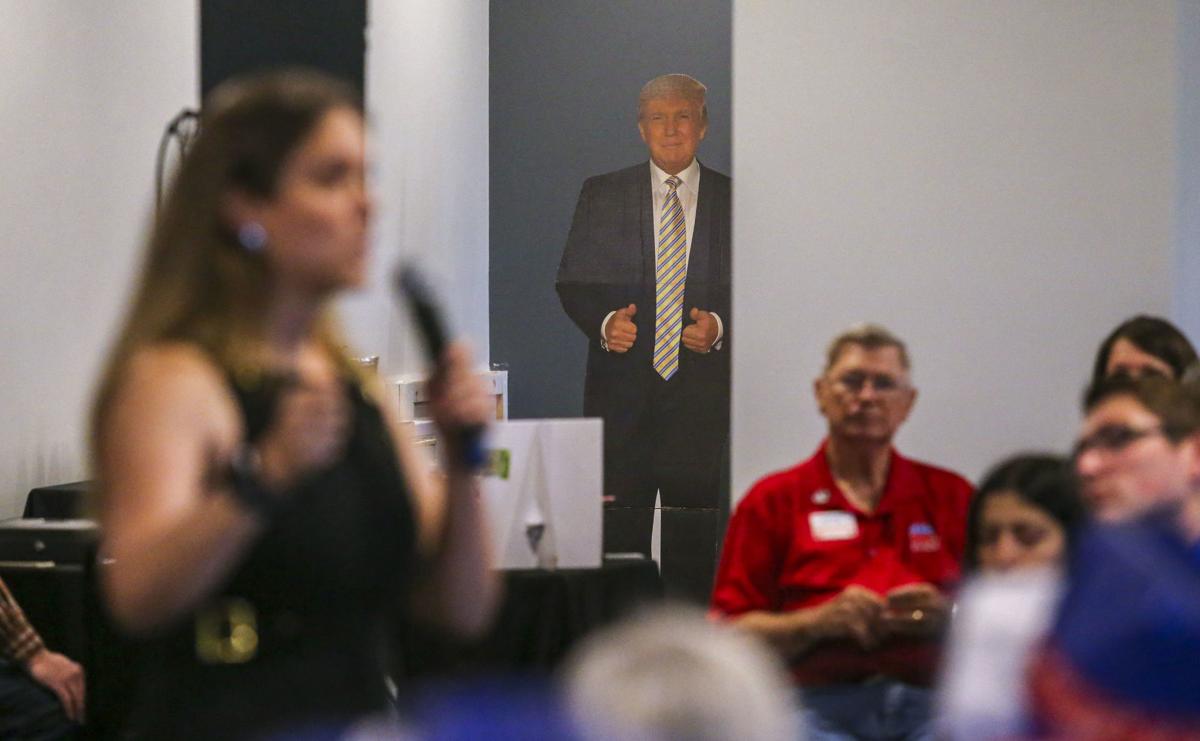 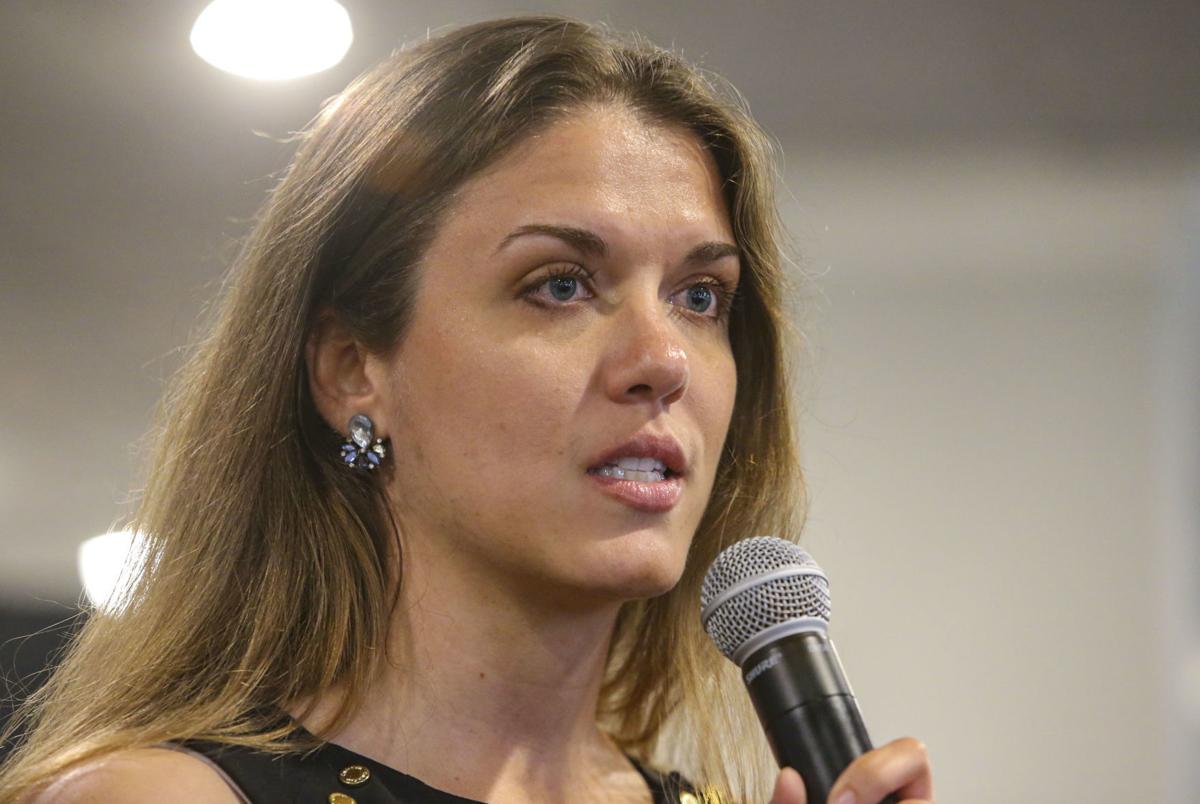 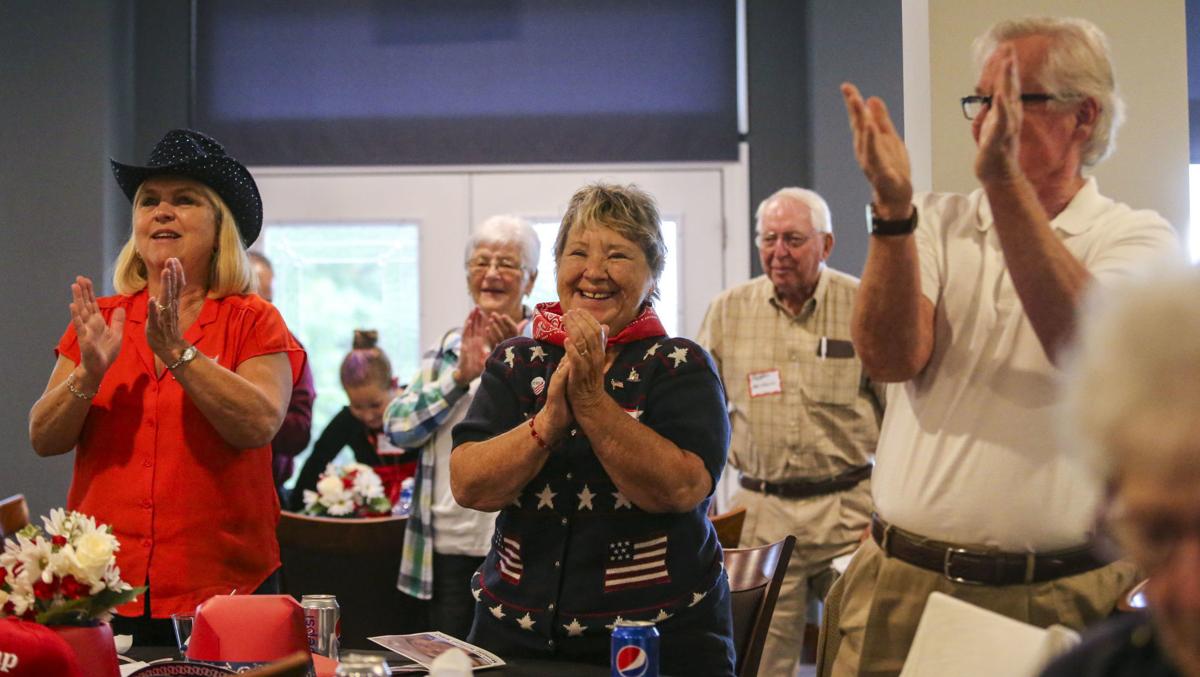 Attendees stand and applaud for a speaker talking about Republican values at the Rock Island County Republicans Ronald Reagan BBQ event at Pinnacle Country Club in Milan ON Sunday. 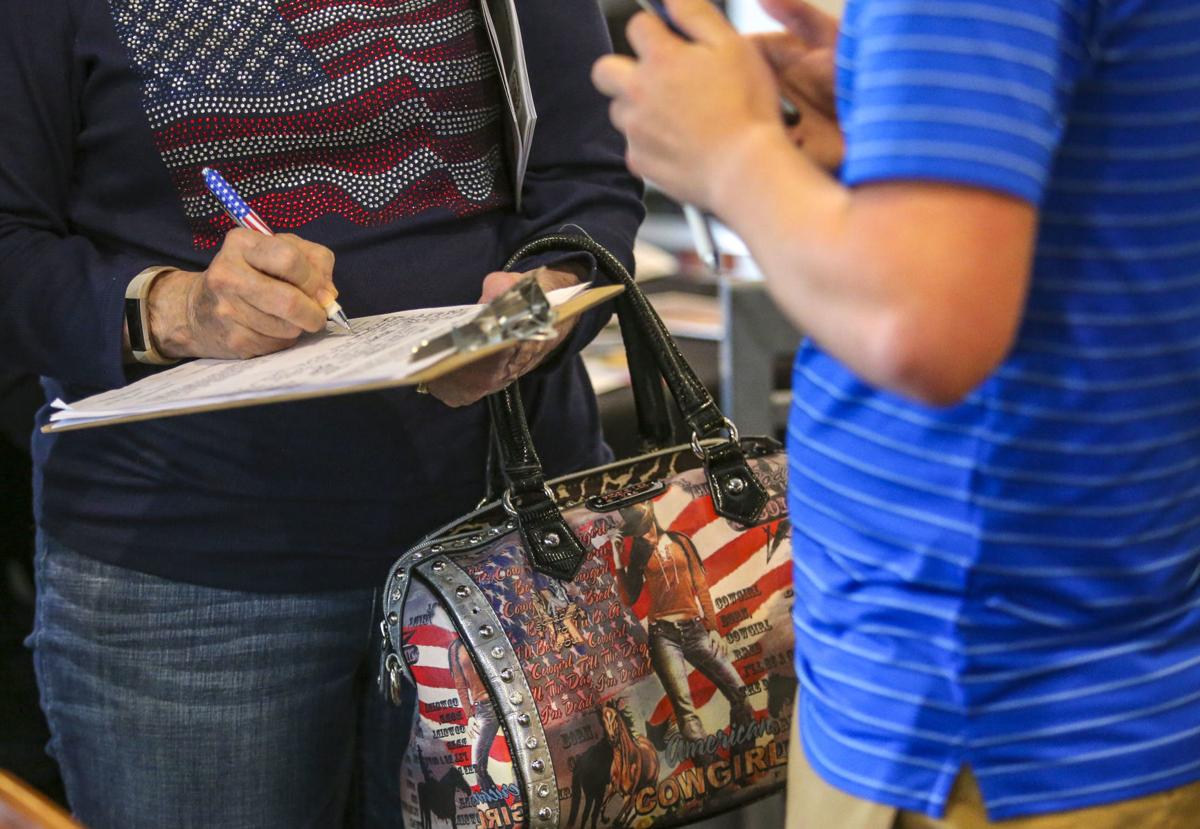 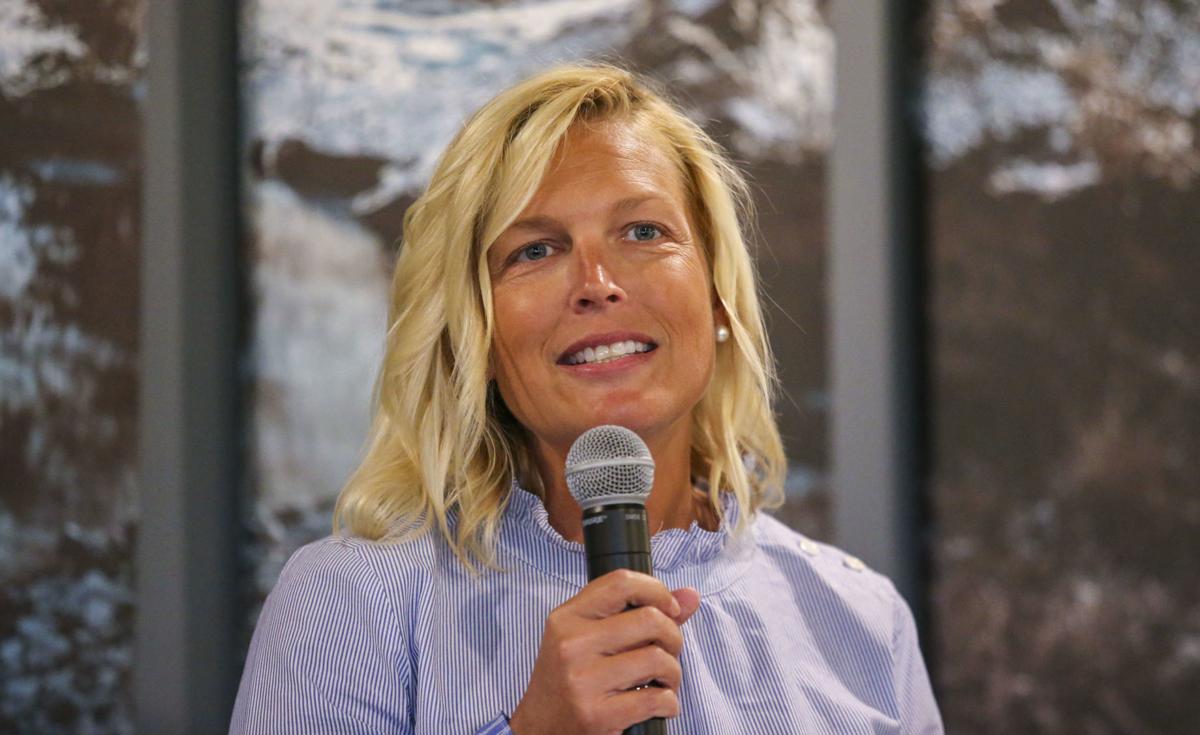 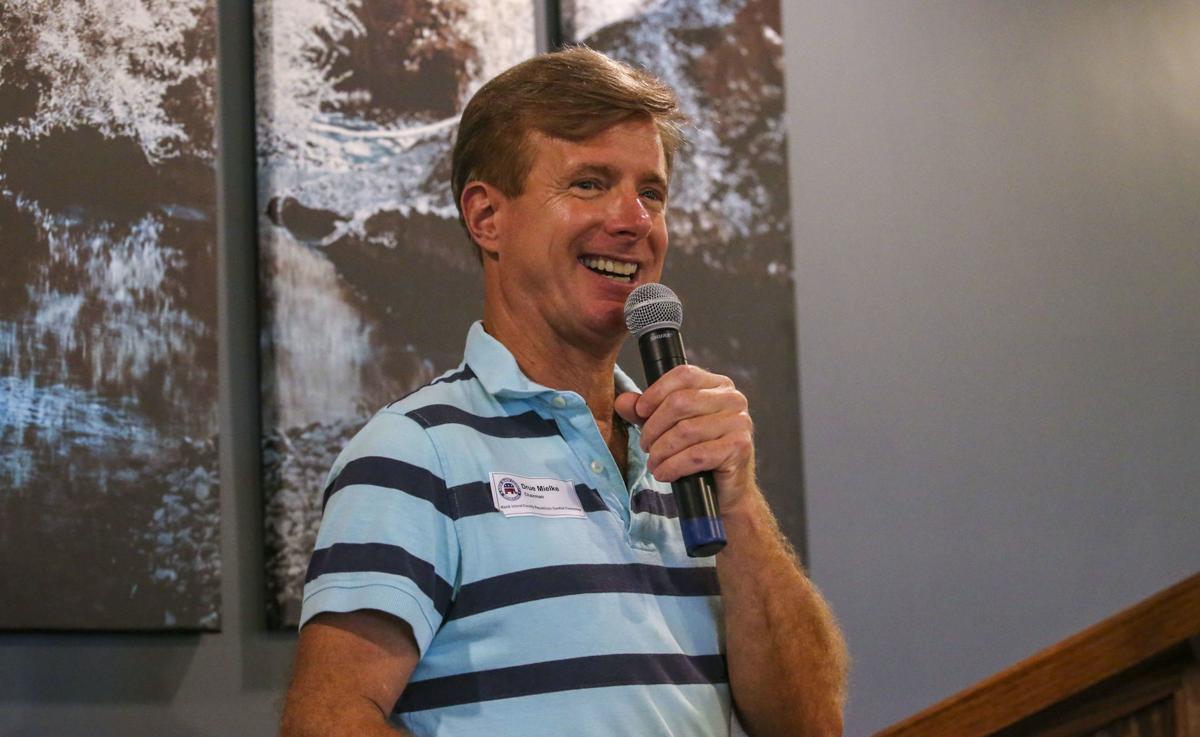 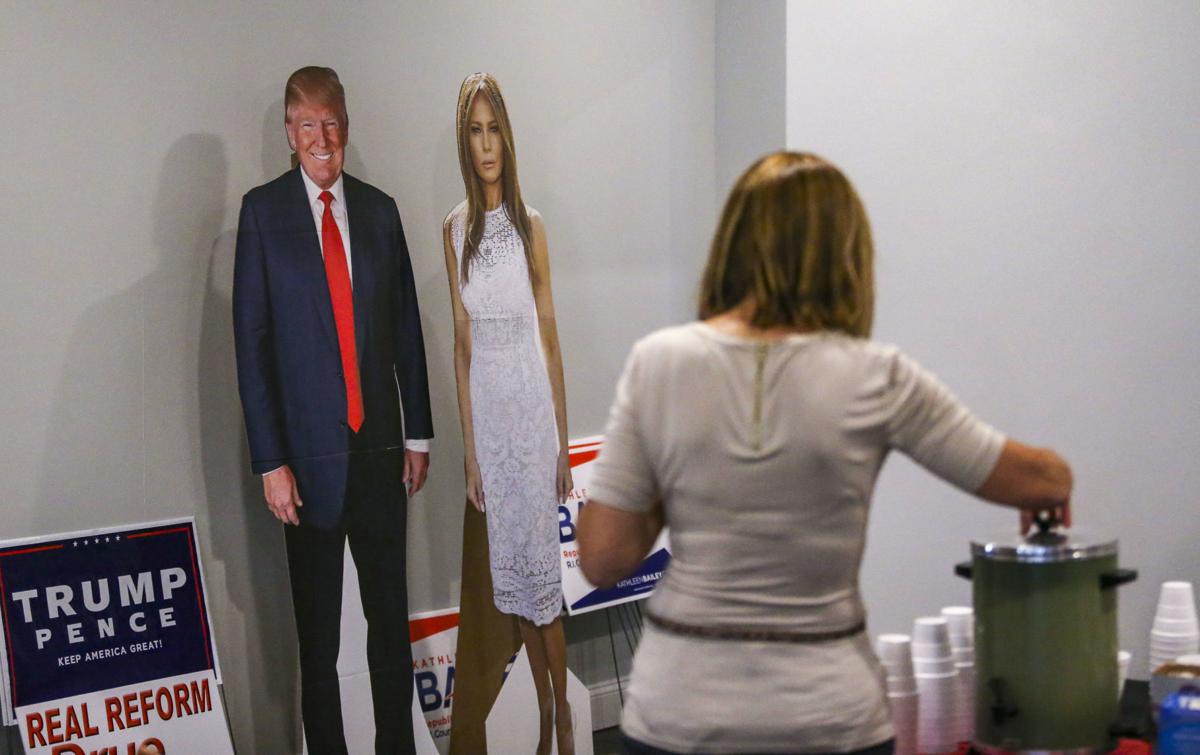 MILAN — Rock Island County Republicans heard early pitches from political candidates and status reports from elected officials on Sunday during the annual Ronald Reagan BBQ in Milan, where the main theme was getting more Republicans elected on the local, state and federal level in upcoming elections.

Illinois Statehouse Republicans took the opportunity to bemoan the Democratic trifecta in Springfield and a deluge of signature legislation forwarded by Democratic Gov. J.B. Pritzker over his first eight months in office. They also noted challenges the Republican Party has faced with dwindling numbers in the House and Senate in recent years.

Republican Rep. Tony McCombie of Savanna pointed to abortion rights expansion and recreational marijuana legalization as examples of policies passed under Democratic control. She said “comprehensive structural and political reforms” are needed to give Republicans a greater say on state legislation.

“The worst thing that’s happening in the state of Illinois right now is how far apart we are,” McCombie said. “With only 44 seats, nobody has to talk to the Republican side of the aisle. They can pass what they want, when they want and how they want to.”

Illinois Sen. Neil Anderson, R-Andalusia, also spoke to the issue of re-electing and electing new candidates. He referenced his hard-fought re-election last year, noting that his Senate district was the only one that put a Republican back in office and chose Pritzker over ex-Republican Gov. Bruce Rauner. And he cautioned that local Republicans cannot become complacent, calling for attendees to rally around whomever is the Republican candidate to challenge Democratic Rep. Michael Halpin next year.

“No matter who wins the primary, we got to support the person against Mike Halpin,” Anderson said.

Glen Evans, a Republican candidate looking to unseat Halpin next year, introduced himself to the crowd as a minister, community activist and former Democrat. He shared the story of his transition to the Republican Party and his several tries for office as he sought to portray himself as the best candidate to win the seat.

“The reality is that Halpin can be beat and I can beat him,” he said.

About 75 people showed up for raffles, food and speeches. Cardboard cut-outs of President Donald Trump and First Lady Melania Trump greeted attendees at the doorway of the event space in the Pinnacle Country Club dining room in Milan.

Several people in the crowd wore outfits that offered a visual salute — cowboy hats, red bandanas — to the party's namesake, Reagan, the 40th president, while others dressed in support of the 45th, sporting Trump T-shirts and “Keep America Great” baseball caps.

Rock Island Republican County Chairman Drue Mielke, who also sits on the county board, described the gathering as a “goodwill” social event. Tickets sold cover the cost of running the annual meeting, Mielke said, and offer a venue for local Republicans to connect.

Also making introductions Sunday were two Republican candidates seeking to run against Democratic U.S. Rep. Cheri Bustos in 2020. Mielke described the seat as “winnable,” noting Trump won in the 17th congressional district in 2016 despite Bustos' re-election that year and her re-election again in 2018.

With Trump on the ticket in 2020, many area Republicans view next year as an opportunity to get one of their own in Washington, D.C., for the first time since U.S. Rep. Bobby Schilling in 2011.

Esther Joy King, 33, of East Moline, an attorney with the Judge Advocate General’s Corps for the U.S. Army Reserves, announced her intention to seek the congressional seat last month. She said 2020 will be a major marker for the country and display how the U.S. will move forward for years to come.

“I would venture to say it’s the most important election in my lifetime,” she added.

Eugene Farrell, another Republican eyeing Bustos’ seat, noted he grew up in the area and learned the sort of “small-town values” that he’d bring if elected.

The eviction moratorium ends this weekend. Two groups will staff a help desk at Scott County Courthouse to help those facing eviction.

The ordered pause in evictions during the pandemic ends on Saturday. In Scott County, 63 evictions are scheduled for next week, a worrisome indicator for local legal aid leaders that the moratorium’s expiration will bring a surge of evictions.

New federal courthouse to be built downtown Rock Island. But it won't be at the former county courthouse.

Attendees stand and applaud for a speaker talking about Republican values at the Rock Island County Republicans Ronald Reagan BBQ event at Pinnacle Country Club in Milan ON Sunday.