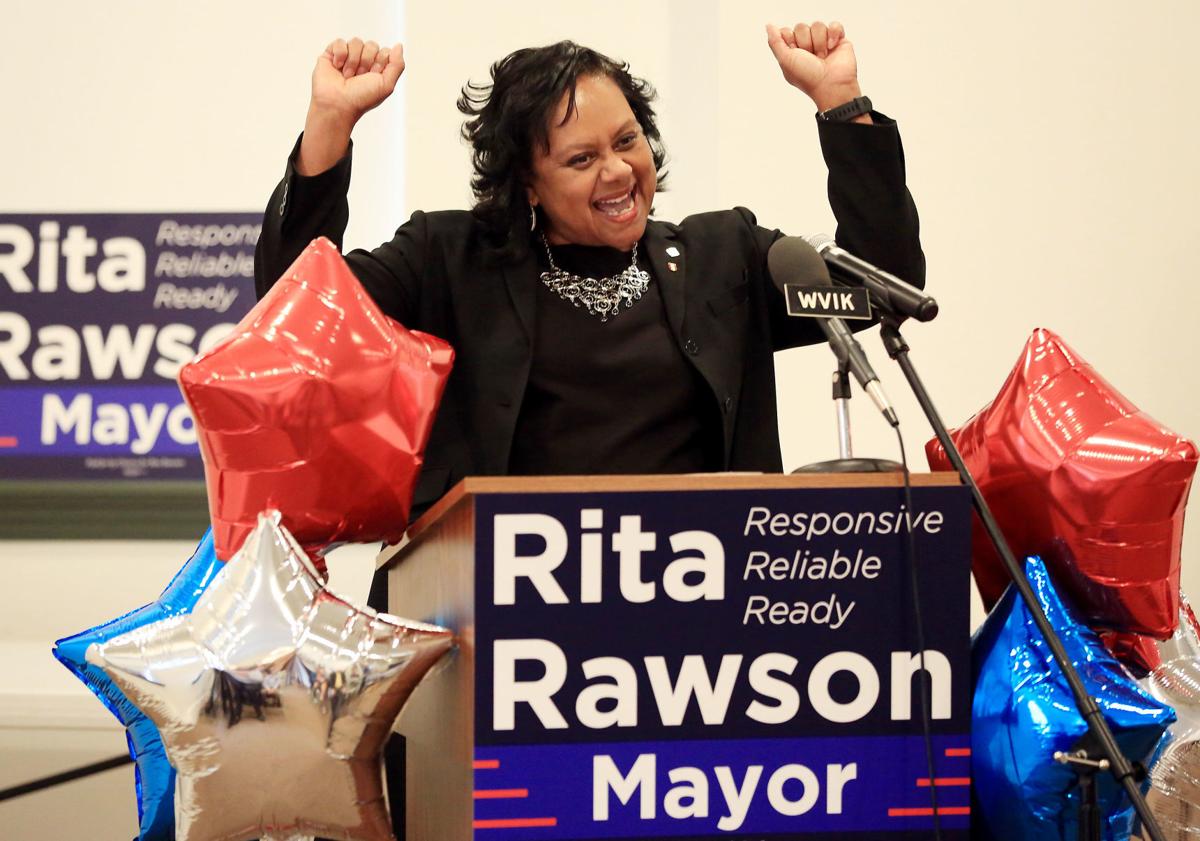 Davenport Fifth Ward Alderwoman Rita Rawson raises her hands and cheers as she announces her candidacy for mayor at the German American Heritage Center. 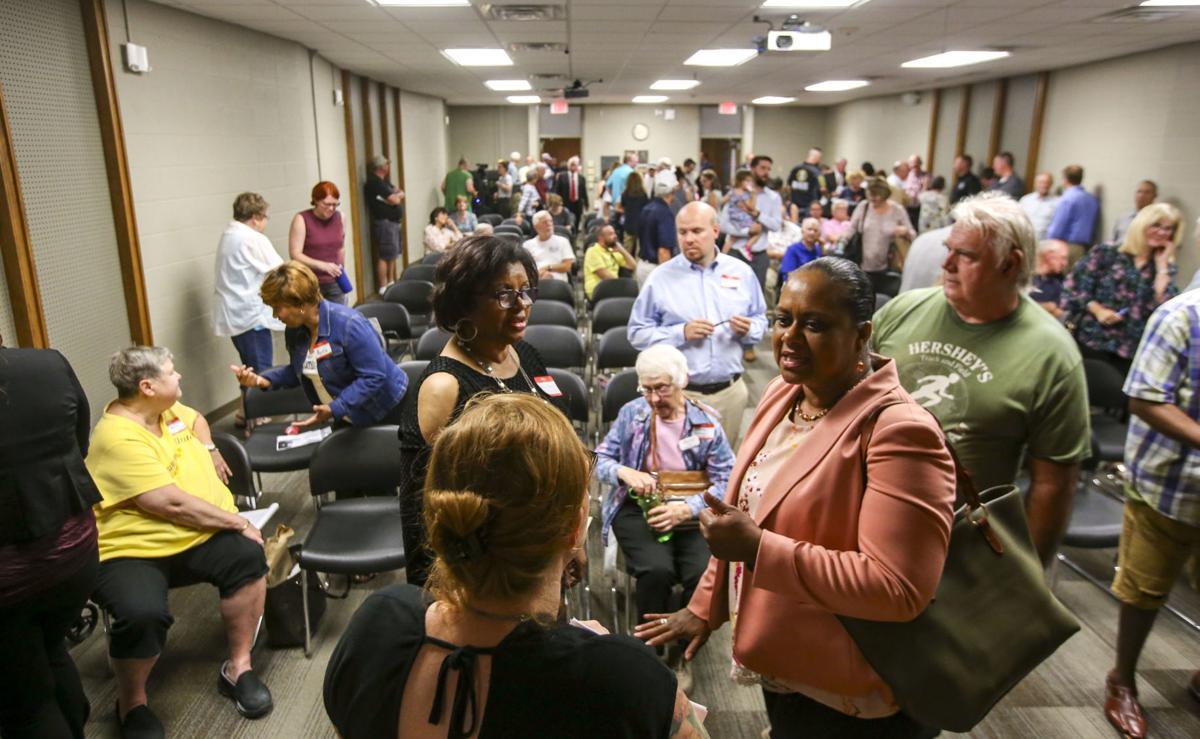 Mayoral candidate Rita Rawson speaks to residents after the session for her and the five other candidates for mayor during a forum hosted by Iowa United Women at the Davenport Library on Sept. 10.

As Alderwoman Rita Rawson runs to become the Davenport’s next mayor, she sees the city at a crossroads.

She thinks Davenport needs to bring in more revenue, grow its tax base and do more to address issues with affordable housing. Her policy platform is often bolstered by data and community trends she has studied over recent years through her involvement on the city council, with area neighborhood organizations and in her professional career.

Rawson has represented Davenport’s 5th Ward, an area that includes the East Village, since joining the city council in 2016. She quit another job as a professor teaching U.S. history and cultural diversity through an online curriculum with the University of Phoenix to take the elected office for the first time, she said.

Rawson faces five political opponents who range in professional and political experience. The primary election is Oct. 8, and the top two vote-getters will advance to a Nov. 5 runoff.

If elected, Rawson would be the first person of color to hold the third-floor mayor's office in City Hall. She would be the second woman after Kathy Kirschbaum, who was the city’s mayor from 1972 until 1976 and the first woman in Iowa to hold that title.

Davenport government operates under a weak-mayor system. Mayors are able to directly act on policy in only two ways: by casting a tie-breaking vote whenever the city council is split 5-5 or vetoing council-approved legislation. Day-to-day operations are generally run by top paid city staff. But the next mayor will serve as the face of the city and be called upon to influence the direction taken on emerging and longstanding local issues of concern for its taxpayers.

While she points to several things the city has performed well at over recent years, Rawson says more needs to be done. And as mayor, she wants to be the one to do it.

“I’m running because I’ve lived here a long time and I really see Davenport at a crossroads,” Rawson said during a recent interview with the Quad-City Times Editorial Board. “And I think at this point there needs to be somebody in office that … sees the need for change and has some ideas around what those changes can be and plans that can be implemented to change those goals.”

For Rawson, a central issue to her campaign for mayor is the same one that inspired her to run for public office in the first place: housing. It was one of the main talking points she brought up during her campaign launch in April and something she often highlights as an area she is passionate about.

Davenport’s estimated population today is less than it was in 1980. Data maintained by the U.S. Census Bureau show the city is home to roughly 102,000 people — the third-largest city in Iowa — and about 1,000 residents fewer than before the Farm Crisis struck the Midwest and many manufacturing jobs left the region. Over the past several years, major attention and resources have been dedicated to improving the downtown and older parts of the 180-year-old city.

Rawson wants housing to be a top city priority. She has long advocated for revitalizing the older, inner-city neighborhoods through partnerships with local nonprofits and businesses as well as city-sponsored initiatives. The city this year began its pilot housing program Davenport DREAM, which offers grants to homeowners or rehabbers seeking to make certain improvements to properties within a defined geographical area that’s home to lots of older and abandoned residential properties. Rawson provided input on and endorsed the plan, though she says it does not do enough on its own to solve the city's housing issues.

Ideas forwarded by Rawson to expand on that program include getting the state to pass legislation allowing local governments to establish land banks. That, she contends, would provide Davenport greater ability to manage and then find investors to improve or rebuild properties in economically distressed areas.

Upkeep of city streets is also an area Rawson says more taxpayer money should go — to the tune of three or four times as much as is currently spent. She is calling for the city to rethink the materials and processes used in its road construction but ultimately thinks the city has a revenue problem that may need to include conversations around the local option sales tax.

Like her mayoral candidate counterparts, Rawson also considers flooding a major issue that needs more action from city leaders following the disastrous breach that left parts of downtown underwater for several weeks this spring. She points to the adoption of new guidelines from the Army Corps of Engineers as a step forward, though she wants to see more done toward a long-term solution after the city hires experts to bring other options forward.

Examples of what she would like to see include possibly adding some protection in the form of a removable panel wall along the riverfront and expansion of wetland reserve areas, perhaps on Credit Island.

‘I was an anomaly’

Born into poverty in Kansas City, Kansas, Rawson spent much of her childhood under the care of a single mother while living in public housing. She recalls having only one set of clothes to wear to school for the week, subjecting her to incessant bullying from others around her and stern direction from her mother to avoid getting her clothes dirty.

Racism was a regular part of her life. Rawson, 51, grew up during the late '60s and early '70s, when she says biracial children like herself were widely viewed as an “abomination” and “hated by everybody.” Her mother, who was white, was shunned by her immediate family because Rawson “was not the appropriate race” in their view, Rawson said.

“I was an anomaly, and I wasn’t really seen as a human being,” Rawson said. “So people treated us accordingly in the neighborhood.”

Rawson says she met her maternal grandparents only once. They never acknowledged Rawson and looked at her like “an infectious disease,” she said.

As she sought to “survive” her childhood, surrounded by gangs, drugs and prostitution, Rawson’s mother tried to shield her from the world. Rawson was not allowed to go outside and play with other kids. Her mother, who suffered from mental illness compounded by their environment, often kept Rawson hidden away in a small space about the size of a linen closet, where Rawson would read adult-level books that they sometimes rescued from the garbage.

Rawson says she excelled in her studies in part because of her upbringing, eventually attending a magnet high school in the area reserved for high-achieving students.  During her final two years of high school, her mother became unable to take care of Rawson, and she was taken in by a school counselor and family that she says became her foster family.

Education was Rawson’s ticket out of a life she desperately wanted to leave behind. After visiting Grinnell College, a liberal arts school in central Iowa, she was fascinated by greenery and livestock she had never been exposed to as a child. She studied sociology at Grinnell and later completed a graduate program through the University of Iowa with a focus on social work.

Now, Rawson works full time as a financial adviser with a business she operates out of a Union Station office downtown. That career has fulfilled her goal of owning her own business, she said, and offers additional professional experience she intends to apply to the mayor’s office, including financial knowledge.

Over the past few weeks, Rawson began to openly discuss her early personal life in public forums. She initially was hesitant to do that, she said, because she felt strongly about running on a platform rooted in the issues.

“I wanted to run on the fact that I am qualified, which I am,” Rawson said during a recent interview with the Quad-City Times.

Still, Rawson attributes her background to the approach, direction and leadership she would bring to the mayor’s office if elected. And she considers it something that “sets her apart” from her opponents.

“I think from a mayoral perspective, that gives me some insight that none of them have,” she said of her opponents. “And it’s one thing to read something out of a textbook and spout it back about people of color and racial disparities. But it’s another to actually have lived it.”

Update: After a recount, Mike Matson, Rita Rawson will face off in Davenport mayor's race

'A friend of the people': In his quest to become Davenport’s next mayor, Steve Duffy says he’s a team player focused on increasing public safety

In the backroom den where he spends most of his time these days, Steve Duffy is surrounded by memorabilia celebrating his favorite baseball te…

Davenport Fifth Ward Alderwoman Rita Rawson raises her hands and cheers as she announces her candidacy for mayor at the German American Heritage Center.

Mayoral candidate Rita Rawson speaks to residents after the session for her and the five other candidates for mayor during a forum hosted by Iowa United Women at the Davenport Library on Sept. 10.