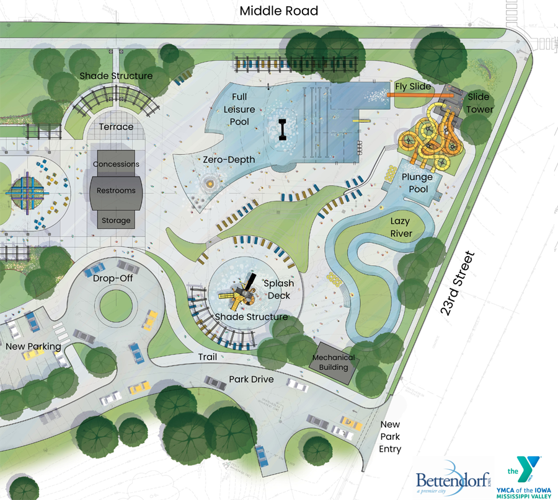 A rendering of the proposed Bettendorf-owned, YMCA-run water park. It would be one part of a proposed project that city staff have called "The Landing." 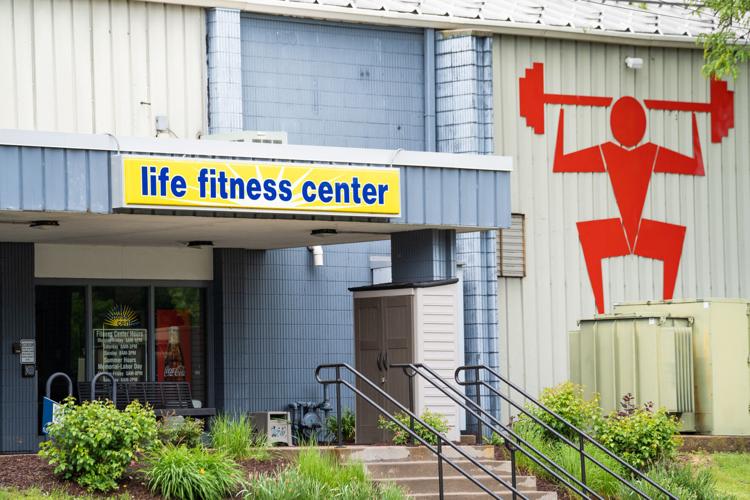 Bettendorf and YMCA leaders are talking about the possibility the Y could take over the Life Fitness Center in exchange for money for a new city swimming pool. 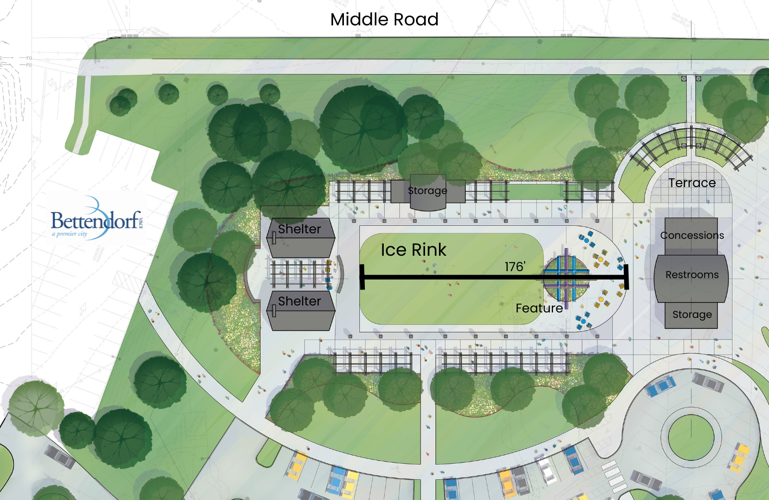 Bettendorf is proposing a new, permanent ice rink to replace Frozen Landing, a temporary rink. Bettendorf estimates it would cost about $3 million to build. 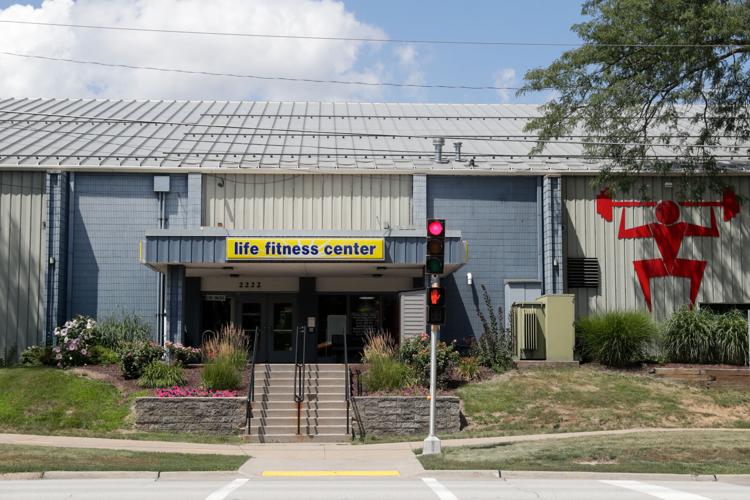 The city of Bettendorf and the YMCA are proposing to together build a new 20,000-square-foot water park with three-story slides, a lazy river and lap swimming pool and splash pad, among other features.

City staff gave City Council members a synopsis on Tuesday of two agreements with the YMCA — one for the construction and operation of the water park and one for the transfer of ownership of the Life Fitness Center.

The two agreements put into writing what city staff have told the City Council and the public about its proposal to sell the Life Fitness Center to the YMCA and split the costs of building a new water park with the YMCA.

The replacement for the current city-owned Splash Landing is expected to cost $18.6 million, to be split evenly between the city, the YMCA, and grants and donors.

And, according to City Administrator Decker Ploehn, the project is well on its way to filling the grant-funded piece of the pie.

Ploehn said the city and YMCA had secured $4 million over 12 years from the Scott County Regional Authority, which awards grants to nonprofit projects from gaming revenue from the Isle Casino in Bettendorf. And the Regional Development Authority, connected to Rhythm City Casino in Davenport, plans to give the project $1 million over five years.

In the meantime, Ploehn said, the city could use its cash reserves, bond the project or secure other immediate grant sources.

Ploehn added that the city was pursuing other grants from three other foundations, but he couldn't yet name those agencies because they hadn't been finalized.

"I believe we will be getting all three of those secured," Ploehn said. "We've asked for $2 million, $1 million, from each entity, and a quarter-million from the third entity, which is the maximum that they would allow."

As for the other pie pieces: the city plans to use its share of $5.4 million in COVID-19 relief funds, and YMCA CEO Brad Martell told a reporter the YMCA has enough cash on hand to pay for its share.

What's in the agreements?

Under the water park agreement, the YMCA would operate the new water park, while the city would own the facilities and land.

Read the agreement transferring ownership to the Life Fitness Center 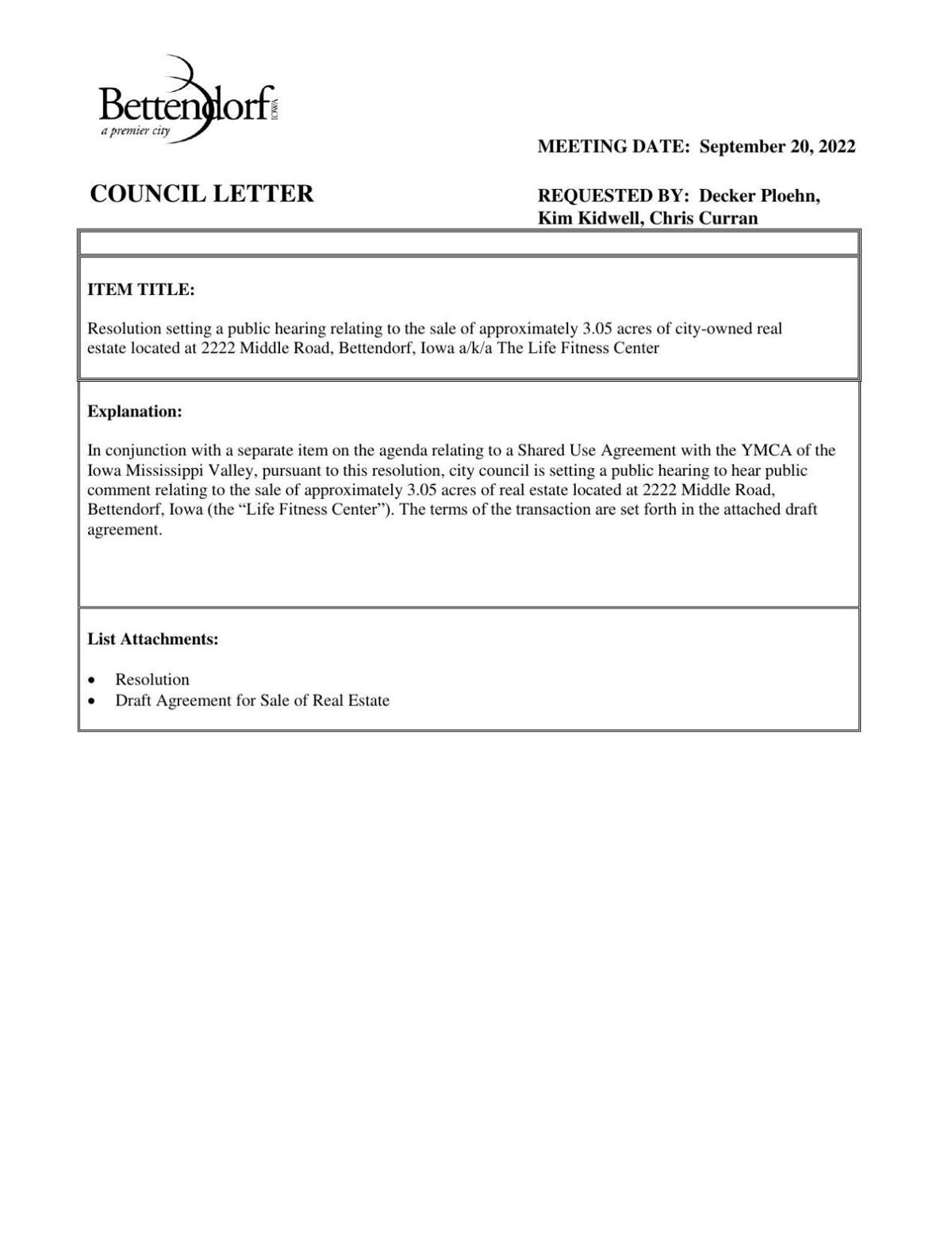 Read the agreement for the proposed city-owned, YMCA-operated water park, to be called The Landing 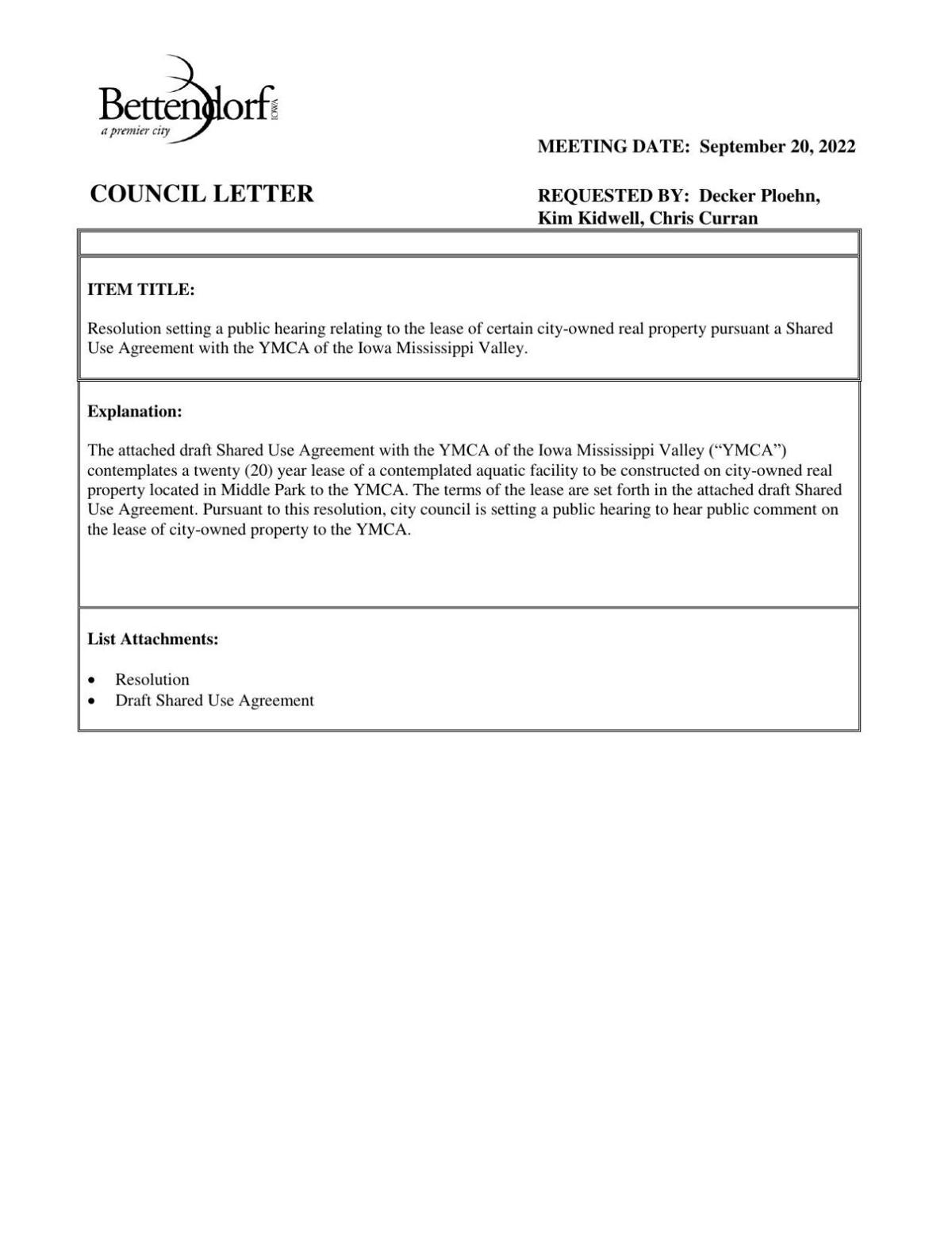 City Attorney Chris Curran told council members the new water park would be open to non-YMCA members for a daily fee that would be "reasonable" compared to other Quad-Cities amenities, in addition to being open to YMCA members.

The city would be responsible for capital improvements, under the agreement, which typically would be greater than $5,000 and/or have a longer-than 2-year life span.

Curran added that some changes in language would likely be made before the public hearing.

The YMCA would pay $1.43 million for the building, which would go toward building The Landing, the proposed city-owned, YMCA-run water park.

The YMCA would also agree to keeping indoor tennis for at least two years or if another two-indoor-court facility opens on the Iowa side of the Quad-Cities.

Alderman Jerry Sechser asked staff if the city could raise the asking price of the Life Fitness Center.

But Ploehn and members of council said that the YMCA had committed to putting $6 million toward the water park in exchange for the building, so it would only slice the YMCA's $6 million contribution differently.

"We kind of saw that as an exercise in futility," Ploehn said.

What about Doggy Splash?

Alderman Scott Webster asked city staff and Martell if the new water park would keep the popular end-of-season day where patrons can bring their dogs to splash and swim.

All were quick to respond with a "yes."

This story has been updated to clarify the roles of the YMCA and the City in paying for maintenance and replacements.

Growing Pains: Moline to update plans for development south of the Rock River

Developing south of the Rock River has been a longtime goal for growing Moline since the 1990s.

'Like a warzone:' Residents in Pine Island cleaning up after Ian

A rendering of the proposed Bettendorf-owned, YMCA-run water park. It would be one part of a proposed project that city staff have called "The Landing."

Bettendorf and YMCA leaders are talking about the possibility the Y could take over the Life Fitness Center in exchange for money for a new city swimming pool.

Bettendorf is proposing a new, permanent ice rink to replace Frozen Landing, a temporary rink. Bettendorf estimates it would cost about $3 million to build.