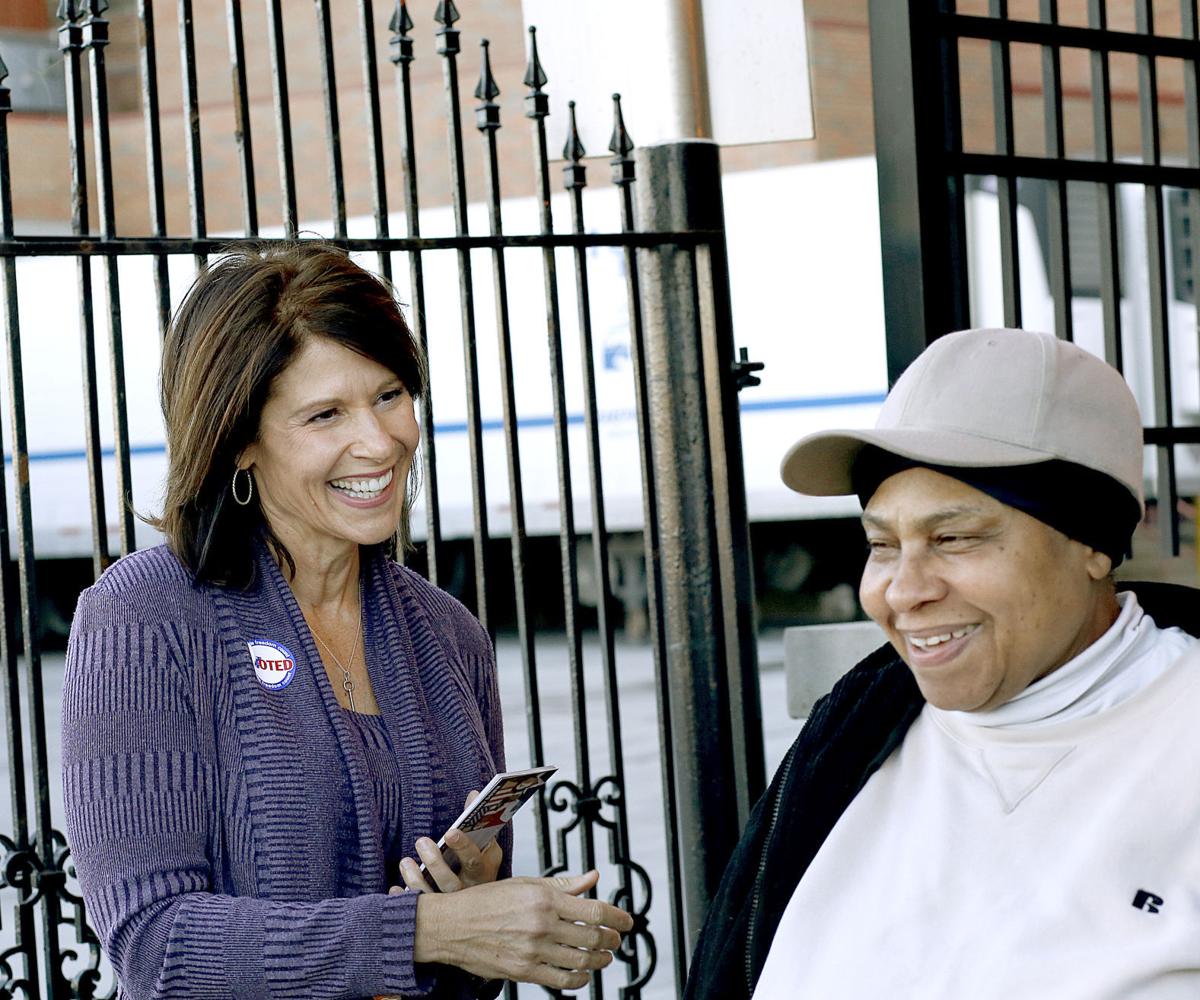 U.S. Rep. Cheri Bustos, D-Ill., greets people on Election Day at the Kraft plant in Davenport. She was one of eight Democrats across the country who won in districts that also went for Republican Donald Trump in the presidential race. 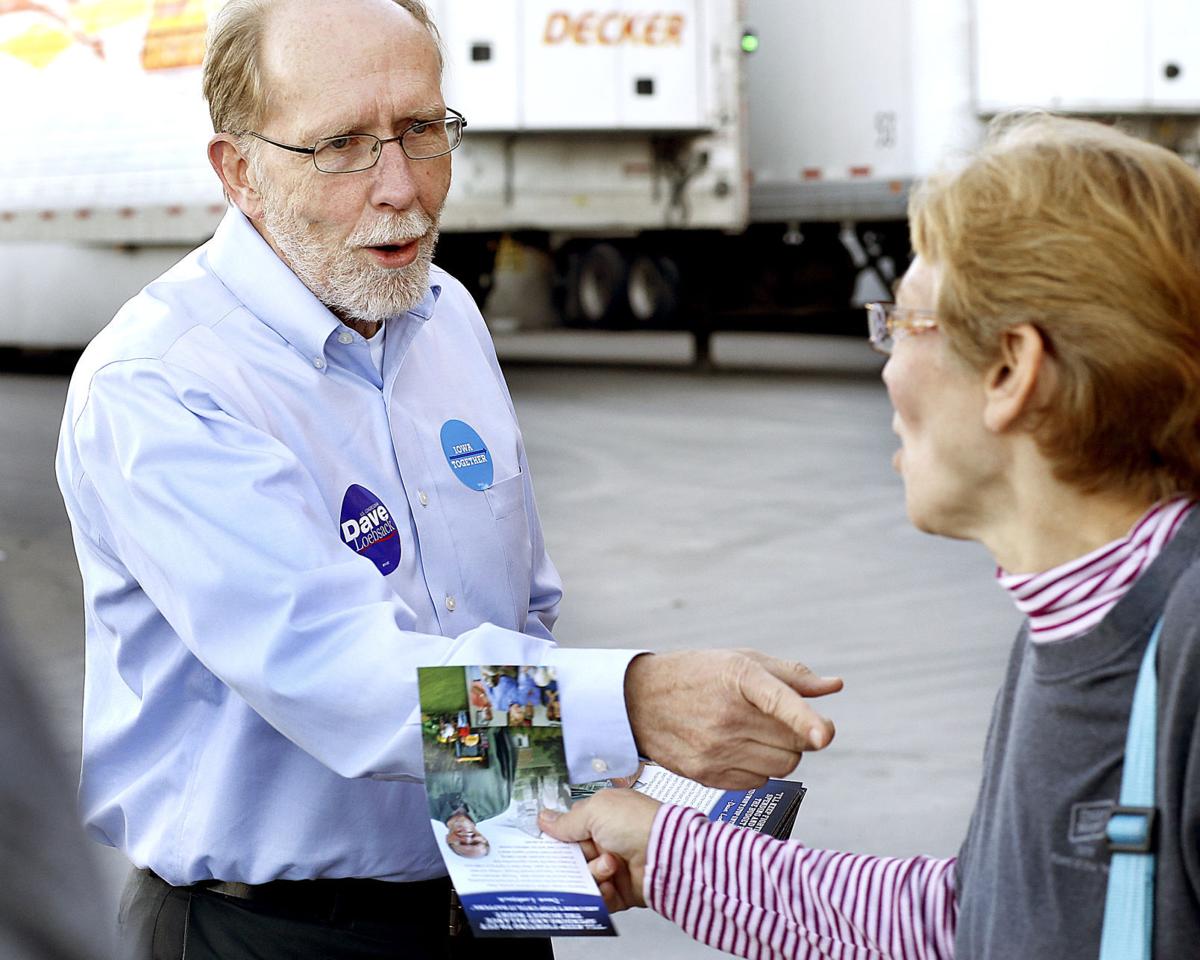 U.S. Rep. Dave Loebsack, D-Iowa, right, greets people on Election Day at the Kraft plant in Davenport. He was one of eight Democrats across the country who won in districts that also went for Republican Donald Trump in the presidential race.

In the aftermath of the 2016 election, much attention has been paid to rural parts of the United States, particularly the upper Midwest and Rust Belt, where President-elect Donald Trump surprised analysts with a stronger than usual performance for a Republican.

These areas are places where many Democrats think they need to improve. And by some estimates, there are only eight Democrats in Congress who represent districts where Trump won.

Both significantly outperformed Democratic presidential nominee Hillary Clinton in their districts. And as Democrats across the country try to figure out what went wrong on Election Day, one of the questions they're asking is how to appeal again to rural and small-town voters.

It appears Bustos, in particular, will be a key voice on that. She has been nominated by House Minority Leader Nancy Pelosi to co-chair the House Democratic Policy and Communications Committee.

Q. You are some of the few Democrats who represent largely rural districts. What advice would you give to your party to connect with these voters?

Bustos: I would say you’ve got to be there. You’ve got to listen to people, talk with people, ask people questions. And when I am not out in Washington, D.C., voting, I am back home. I do what we call supermarket Saturday, I just walk up and down the aisles at Hy-Vee and between people grabbing their corn flakes, I’m asking people what’s on their minds and what do they want me to know when I head back to Washington?

Loebsack: I would give the same advice I’ve been giving all along, which is make sure we pay close attention to the economy, to opportunities, to jobs, and all those basic economic issues that are of concern to folks, whether they’re in the rural  areas, the urban areas or whichever part of the country they’re from. And then, you know, since I’ve been in office for the last 10 years, I come home almost every weekend. I literally get out to where people work, where they play and where they live. We don’t always agree when I talk to folks, when I have coffees with your congressman or when I got to a farm or whatever. But I go there and I listen to them and I talk to them and I do the best I can to bring their concerns back to Washington, D.C., so I can rep them the best way that I possibly can.

Q. Is the party’s problem in some of these areas that they’re not showing up in these areas and talking to people, or is it about having the wrong set of policies or a flaw in how they talk about their priorities?

Bustos: I don’t think it’s at all the wrong priorities. In fact, I think we have the right priorities. Democrats don’t lose focus on working families, on working men and women. Our foundation is in labor and in making sure that we’re there to help lift people up. So I don’t think it’s at all the wrong priorities. We’ve got a whole Make it in America bill that we talk about all over the place. But we have got to make sure that we are relentlessly focused on jobs and the economy. And I would say, you know, if I were to point to how I did so well, where someone like Donald Trump can win my district and yet I win by 20 points, I think it has a lot to do with going back to the day that I announced I was running for Congress. I have talked about the jobs and the economy. It has been my number one focus. It is what we talk about.

Q. Is that an implicit criticism of Hillary Clinton?

Bustos: No, it's not a criticism of Hillary Clinton. (Bustos, however, notes that in 2008, Barack Obama set up health care roundtable discussions across Iowa.) He set up these discussions all over the state of Iowa about things that really mattered to people, and at that time, there were 50 million uninsured Americans. And I was working in health care, and I was invited to be part of that dialogue. But that was a lot of listening to people and what their real concerns were. I just don’t think we can do enough of that. You don’t know what’s on people’s mind unless you ask them.

Q. Hillary Clinton didn’t make a lot of trips to Iowa. It’s been noted she didn’t really campaign in some of the important upper Midwest states she lost to Donald Trump. Do you think that was a mistake on her part, particularly in Iowa?

Loebsack: I actually think that prior to the (2016) caucuses, she did a much better job on that front than she did the first time. But then when the general election, of course, came around, she came some of the time, there’s no question about that. I think that Iowa could have been taken a little more seriously. But there were a lot of surrogates who came in, a lot folks who came in for her, on her behalf, and so I think if that criticism is valid, I think it probably makes more sense in other parts of the industrial Midwest.

Q. There has been a lot of discussion since Election Day about Democrats relying too much on appeals to people based along racial, gender or ethnic lines and how they need to talk more broadly about values that connect Americans. Is that a fair criticism, and what do you think of that argument?

Bustos: It was clear this election cycle that people wanted, they wanted somebody to focus on getting real results. They wanted the candidates running in their regions or for president to focus on a better life ahead for people. And I understand their frustration. (Bustos notes that wages have not recovered in Knox County since the Maytag plant left there or in the Freeport area, where Sensata Technologies shut down operations.) So I understand these frustrations, when manufacturing has been our foundation and when you have, you know, 90,000 labor households in a district like ours, they feel like people in politics haven’t listened to them and certainly have not responded to them. And I think that is what the frustration has been over.

Loebsack: I think we have to appeal across those lines. That’s the important thing. No question about that. But that doesn’t mean we lose sight of our concerns for equality, that we lose sight of our concerns to make sure everybody has proper voting rights and the ability to go to the polls and cast their ballot without discrimination. It doesn’t mean, for example, that we’re not concerned about equality based upon sexual orientation, but it does mean the economic message cuts across those different groups.

Bustos: I don’t think this is an either/or, by any means. You know, those are our values that keep us together as Democrats. There’s not a whole lot of variability in that we believe in equal pay for equal work, that we believe in equality at all levels. ... But people have to know that while those are our beliefs, we’re going to fight for them and we’re going to do everything we can to make sure that our nation doesn’t continue to ship jobs overseas and that we start making things in America again.

Q. Can Democrats work with Donald Trump on trade, a big issue in this area and in agricultural areas?

Bustos: I said it on election night, when it was all very raw and fresh. I will make every attempt to work with President Trump where we can find common ground. And if he takes us down a dark place, then we’re going to have a fight on our hands. (Bustos went on to criticize several of Trump's picks for jobs in his administration, including to lead the Justice, Education and Health and Human Services departments.) He’s got not just billionaires but multibillionaires he wants to put in charge of the Treasury and Commerce departments. So when he was talking about draining the swamp, I don’t think he’s drained the swamp. He’s added to it.

Loebsack: Look, I think there are some ways we can actually come together on this. I'm hopeful that this administration will follow through on their rhetoric of making sure that we don’t encourage or reward companies for going overseas, to make sure they’re incentivized to stay here and that penalties have to be imposed on companies for taking jobs overseas. I think we should do that as well.

Q. Both are leading Democrats in their states in places where the party thinks it needs to do better. Both states also have gubernatorial races coming up in 2018, and in Bustos' case, she's been mentioned as a potential challenger to Republican Bruce Rauner. We asked what role they expect to play in their respective state's races for governor and whether they'll consider running?

Bustos: My view of public service is I want to help the most people I possibly can help. I'm not going to close the door to it, but I have some tremendous opportunities in front of me to help people in the congressional district I represent. And the governor's race is still a long ways off.

Q. Should people ask whether you're a potential candidate for governor in 2018?

Loebsack: People can ask, but I might not answer.

Loebsack: No, not necessarily at all. But at the moment, we're only three weeks past the last election. We're all trying to figure out, have our post mortem, if you will, on the last election, and we can go forward from there.

U.S. Rep. Cheri Bustos, D-Ill., greets people on Election Day at the Kraft plant in Davenport. She was one of eight Democrats across the country who won in districts that also went for Republican Donald Trump in the presidential race.

U.S. Rep. Dave Loebsack, D-Iowa, right, greets people on Election Day at the Kraft plant in Davenport. He was one of eight Democrats across the country who won in districts that also went for Republican Donald Trump in the presidential race.