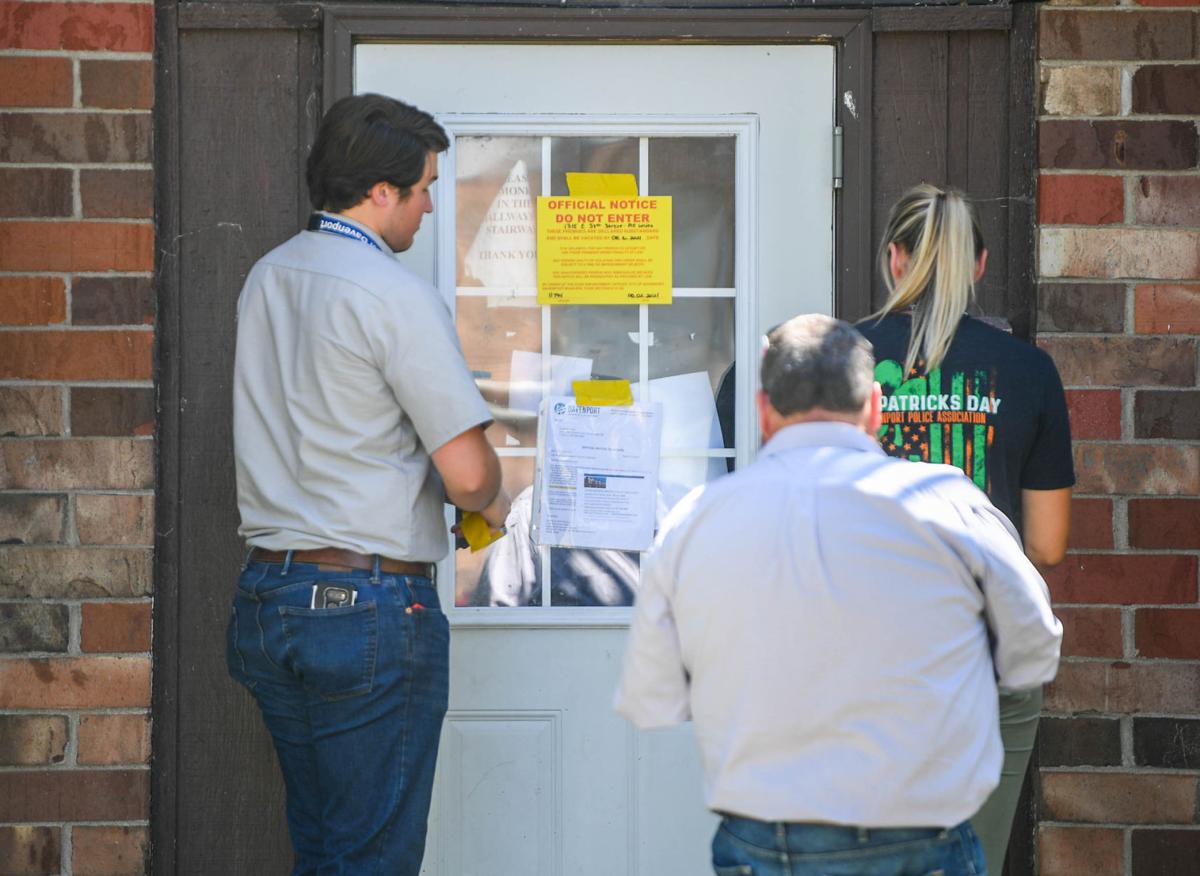 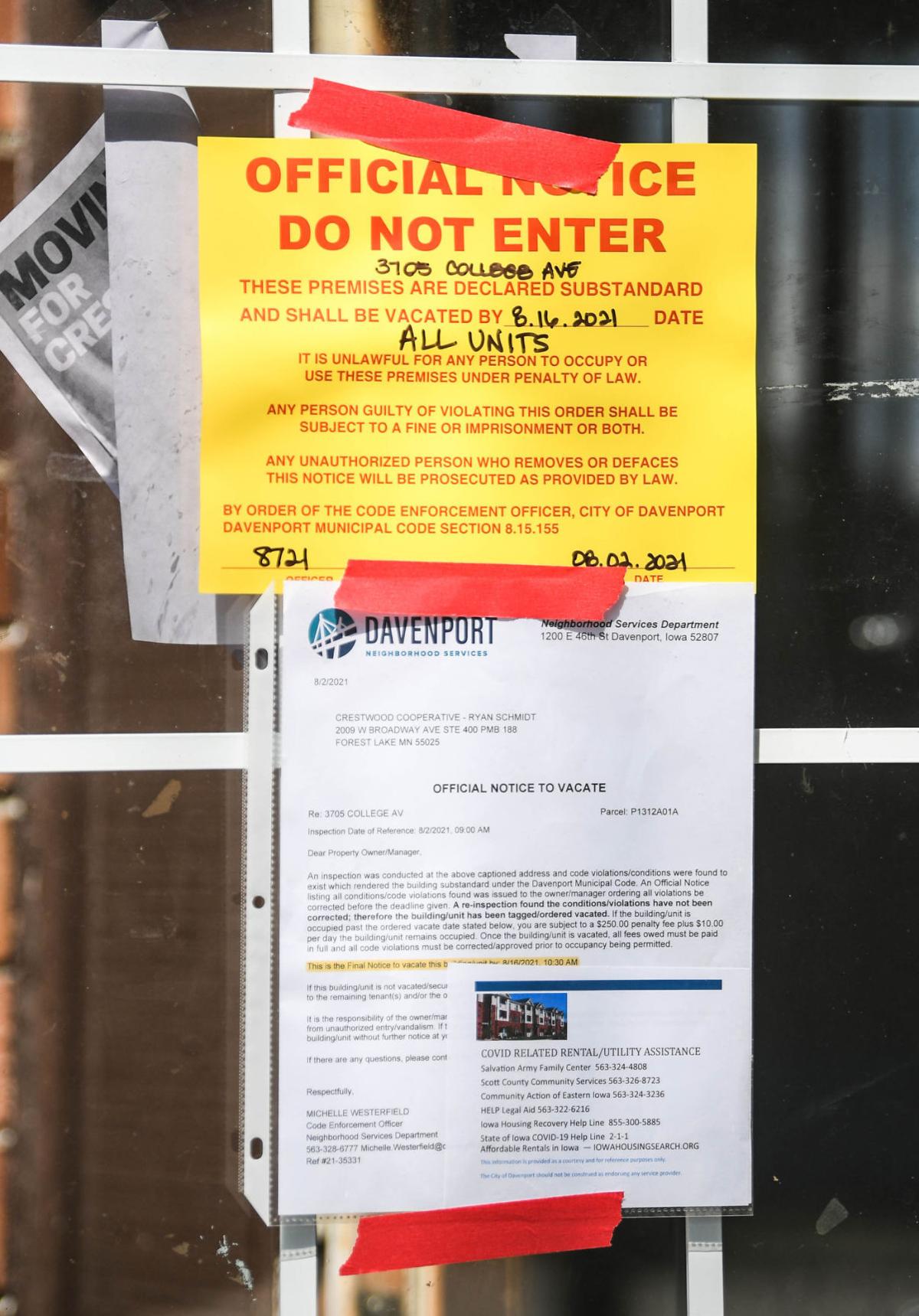 A manager for a Minnesota-based rental property owner who failed to make sufficient repairs to what Davenport city officials say have become substandard housing in the Quad-Cities evicted tenants last year in violation of both state and federal eviction bans, according to Iowa Legal Aid and online court records.

As city officials responded to health and safety complaints and violations at rental properties owned by Crestwood Properties, LLC and Crestwood Townhomes, LLC, property management evicted tenants for nonpayment of rent during the pandemic in violation of both state and federal moratoriums, according to court records.

Last year, Crestwood Properties and Crestwood Townhomes filed petitions in Small Claims Court in Scott County to begin proceedings to evict 12 tenants for nonpayment of rent, three of which were dismissed by the court for violating a temporary halt on rental evictions ordered by Gov. Kim Reynolds as a part of her administration’s response to the coronavirus pandemic, which caused unemployment levels to spike to record highs.

In another, on the morning a Scott County Sheriff's deputy was scheduled to remove a tenant and her three children from their apartment, an attorney for Iowa Legal Aid was able to get the judge to halt and later dismiss the eviction for violating federal law.

In two of the cases, evictions were ordered and granted after a federal eviction moratorium for federally connected properties ended on July 25, 2020, but before the U.S. Centers for Disease Control and Prevention halted residential evictions to help slow the spread of COVID-19. That moratorium, which sought to protect millions of Americans behind on their rent from being tossed out of houses and apartments, expired July 31.

Crestwood Townhome, LLC, which lists the same address as one of the rental properties owned by Crestwood Apartments Cooperative of Forest Lake, Minn., moved to evict Anna Vela in June 2020.

Vela, who lived with her three children in a two-bedroom townhome, was paying $650 in rent for a unit at 3811 Bridge Ave., but had her weekly hours working at a Davenport supermarket cut during the pandemic to 11 hours from 35 hours.

Vela also had to quarantine for two weeks after coming into contact with someone who had the coronavirus, and was later hospitalized with COVID-19 and unable to go back to work, she said.

The 39-year-old paid what she could, but Crestwood Townhomes still moved to evict her, giving her three days to pay her rent in full or face eviction. On June 30, after trying to serve Vela notice of nonpayment of $1,331.94 in rent from May 1, 2020 to June 16, 2020, Crestwood filed a petition in Scott County District Court to evict her.

Crestwood, however, never provided Vela proper notice of the eviction hearing, according to court records. As a result, Magistrate Richard D. Wells issued a default judgement in her absence on July 7, 2020, granting the eviction and ordering the Scott County Sheriff's Office to remove Vela from the property and for Crestwood to take possession of the townhome.

Just hours before they were to do so, Molly McDonnell, an attorney with Iowa Legal Aid, got a judge to halt and eventually dismiss the eviction order after McDonnell discovered the property was financed by government-sponsored mortgage entity Fannie Mae. The CARES Act passed by Congress in spring 2020 prohibited evictions and serving notice to vacate federally financed properties — accounting for about one-third of U.S. rental units — through the end of July 2020.

By then, Vela had already moved into her 20-year-old daughter's one-bedroom apartment with her teenage daughter and 2-year-old twins.

A representative for Crestwood Townhomes listed on the notice and petition for forcible entry and detainer did not return a message seeking comment Tuesday.

An representative from Iowa Legal Aid also was unavailable for comment Tuesday.

Vela moved back to the townhome after the court dismissed the eviction order, only to have to move again after years' of neglect by property management have created borderline uninhabitable living conditions.

City officials have ordered surrounding Crestwood rental properties vacated, but not the townhomes, which Vela called a mistake.

"It's horrible," she said. "My neighbor in the townhome across from me can stand in her kitchen and look up into the (upstairs) bathroom. ... Management did nothing. The basements flood. There's mold. ... The shouldn't even (be allowed to have a rental license to rent property in Davenport), and the city is wrong to give them the privilege."

City officials did not respond Tuesday to repeated inquiries about the Crestwood Apartments and Townhomes, including the status of the rental license of the properties' owners and managers.

"They either need new owners or need to be shutdown," Vela said of Crestwood Apartments and Townhomes. "No one should rent from them. No one should ever experience what I experienced, and having kids. My 14-year-old daughter can't focus on school, because she's worried if we were going to get thrown out on the street and where she would go to school."

Vela said she has since recently moved into a three-bedroom house, but is having difficult securing needed rental assistance to be able to stay.

"The city should have been more involved and more on top of things," Vela said. "It's unsafe. For the city to allow this to go on for so long is wrong. (Crestwood owners) should never be allowed to put people through the same situation I went through."

Crestwood renters have by Aug. 16 to vacate apartments

Davenport city officials on Tuesday posted notices at the Crestwood Apartments notifying residents they must vacate the property by 10:30 a.m. Aug. 16.

City Administrator Corri Spiegel, Director of Neighborhood Services Rich Oswald and Director of Community and Economic Development Bruce Berger did not respond to repeated phone calls and emails seeking details and context. Instead, Spiegel provided a three-paragraph statement prepared by city staff, and directed the paper to file records requests in response to questions asked of city staff in emails.

The paper filed several records requests of the city on Tuesday.

"The re-inspection conducted on August 2nd found that the conditions and violations had not been corrected, and remain in a substandard condition," according to the statement provided by the city in response to the newspaper's inquiries. "There are a variety of factors that can contribute to a property condition rapidly deteriorating."

Davenport renters have until Aug. 15 to move after city orders apartments uninhabitable

City of Davenport officials on Monday ordered the Crestwood Apartments on E. 37th Street, behind Dahl Ford Davenport on East Kimberly Road, to be vacated after a follow-up inspection found the properties' owners failed to make sufficient repairs to what officials said have become substandard housing in the Quad-Cities.

'We have nowhere to go': Davenport renters forced to vacate residences plead with city for assistance

Dozens of Davenport renters -- many of whom live paycheck to paycheck, are elderly or have a disability and rely on government assistance -- may soon be forced to move, either due to gentrification or an unwillingness or inability by their landlord to fix substandard housing conditions.

'This should be our top priority': Tenants ordered to vacate Crestwood Apartments offered free food, clothing and school supplies

The Iowa Democratic Black Caucus partnered with Open Door Crisis Assistance to collect donations and put together the event, offering free school supplies, toiletries and other necessities to tenants ordered to vacate from their Davenport apartments.