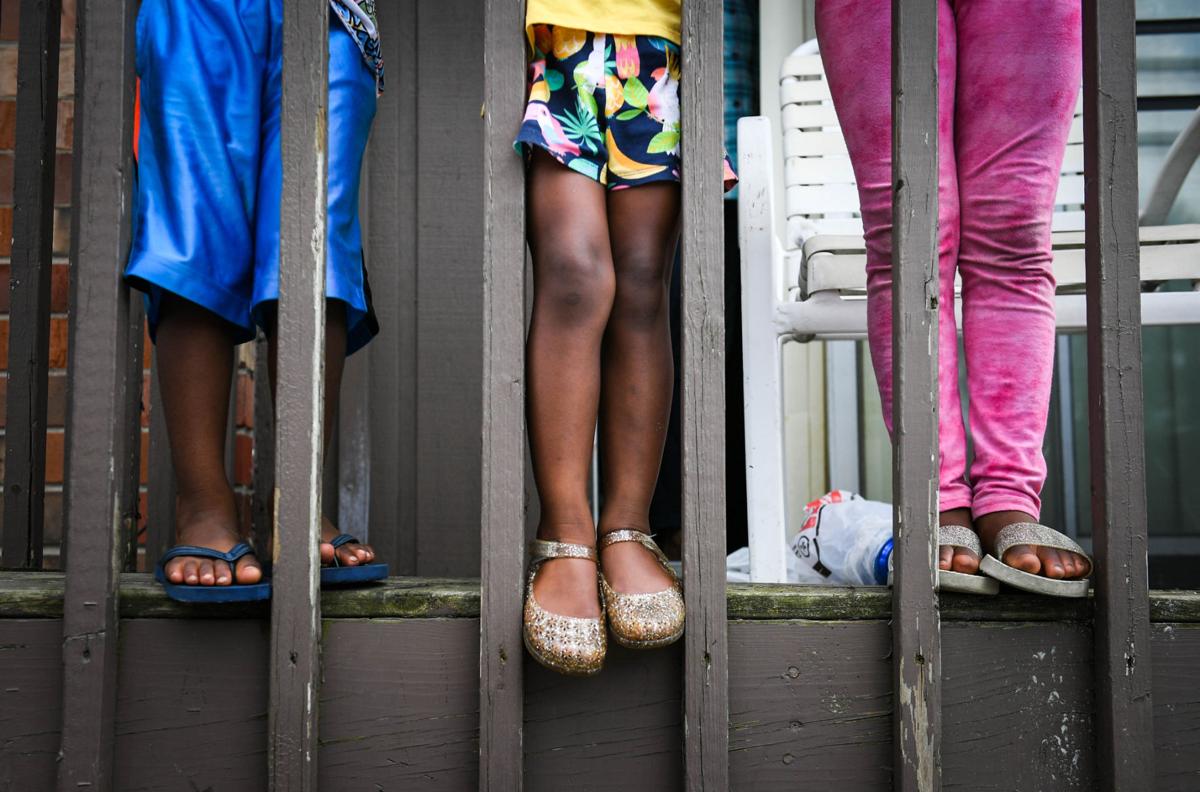 Children play on the balcony of a unit at Crestwood Apartments Monday, Aug. 2, 2021, in Davenport. 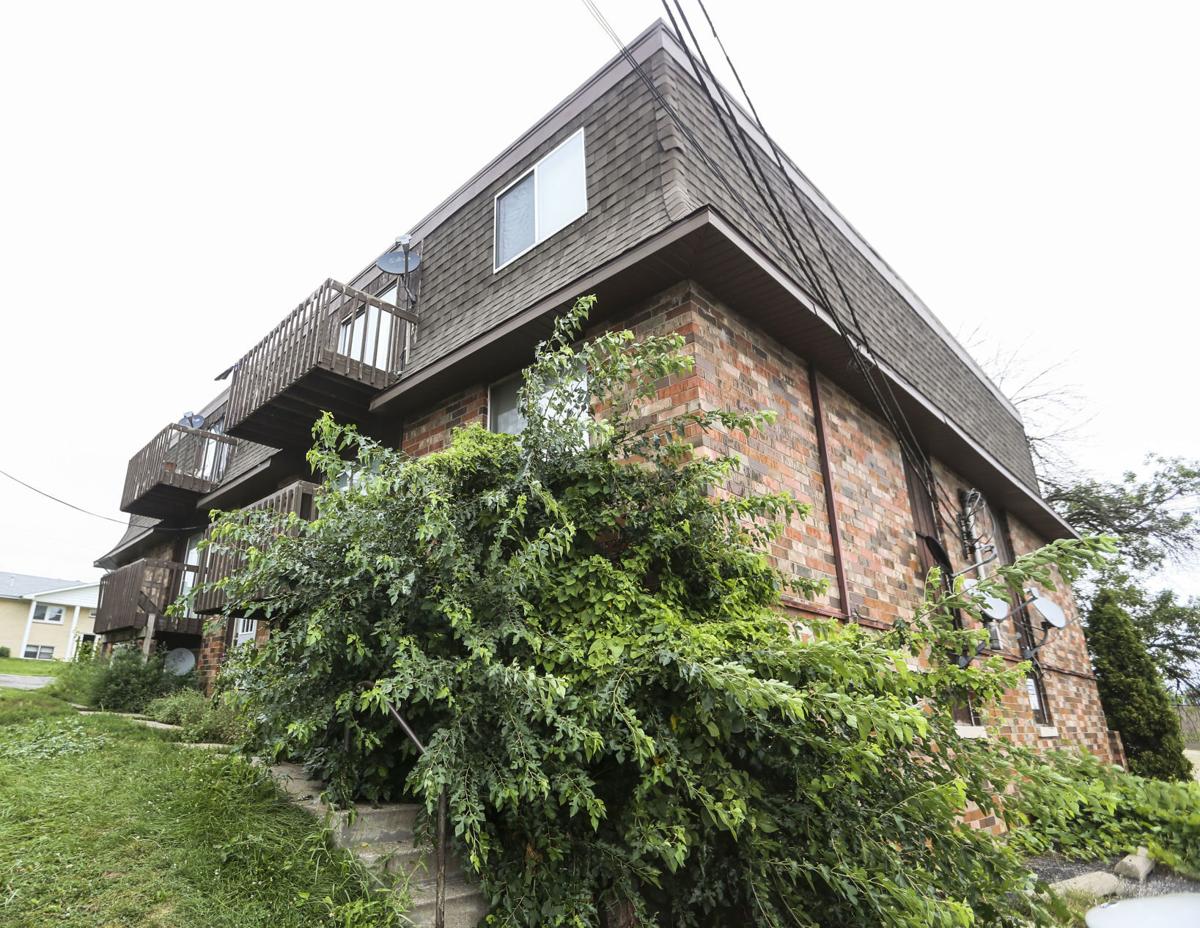 Overgrown plants take over the sidewalk leading up to one of the Crestwood Apartments buildings on E. 37th Street in Davenport, Thursday, July 29, 2021. 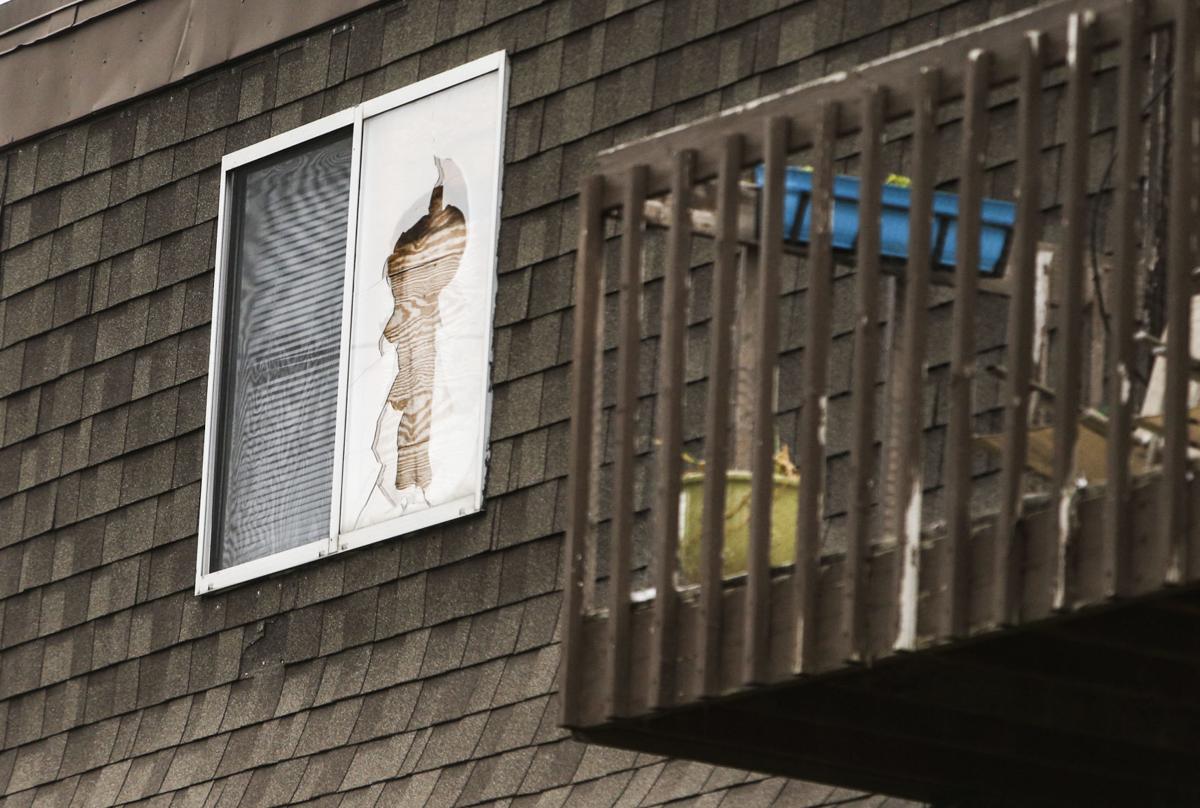 A broken window is boarded up at Crestwood Apartments on E. 37th Street in Davenport, Thursday, July 29, 2021.

Dozens of Davenport renters and their families — many of whom live paycheck to paycheck, are elderly or have a disability — now have until Aug. 15 to find a new home amid an affordable housing crisis and pandemic.

City of Davenport officials on Monday ordered the Crestwood Apartments on E. 37th Street, behind Dahl Ford Davenport on East Kimberly Road, to be vacated by Aug. 16 after a follow-up inspection found the properties' owners failed to make sufficient repairs to what officials said have become substandard housing in the Quad-Cities.

Inspection reports show the city tried for months and on multiple occasions to re-inspect Crestwood-owned units, beginning early this year.

"My understanding is they hardly did anything aside from some outside work," Mayor Mike Matson said Monday afternoon. "We are still working … to get people taken care of by the Salvation Army. Many of the services are helping people."

Matson said he could not comment further as he was headed into a meeting.

Rich Oswald, director of neighborhood services for the city of Davenport, who oversaw Monday's inspection, also did not return a message seeking comment.

According to Iowa Legal Aid, which is providing free legal services to Crestwood tenants, the city's order to vacate applies to the six, 12-unit multiplex buildings owned by the Minnesota-based group.

Adjacent townhomes also owned by the same ownership group are not subject to the order to vacate; however, the landlord must still complete pest control before tenants will be allowed to return to those rental properties, said Alex Kornya, litigation director and general counsel at Iowa Legal Aid.

"The condition the apartments are in are not livable," said Crestwood tenant Linda Lathan, 39, who was staying in a one-bedroom apartment with her 84-year-old father and 6-year-old son.

"Everyone, I guess, was just trying to make it work for what they had," Lathan said. "There's (water) leakage and stuff through the bathroom ceiling. ... It just was becoming, like, really bad after so long, to where people now have to move, and no one was looking forward to this at all."

Lathan said she was in the process of moving to a new apartment with her father, thanks to financial assistance from the Salvation Army and city of Davenport.

The Salvation Army is using about $600,000 in federal block grant dollars received by the city of Davenport through the CARES Act to help pay security deposits and rent for new housing, up to $5,000 per household.

"I'm very happy and very grateful. Words can't explain how grateful I am," Lathan said, adding the process was quick. "It looks like the place is becoming empty and vacated. ... I pray that everything works out for everyone."

Lathan, though, said her adult son and his girlfriend have had "no luck" finding a place for the young couple and their one-month-old child.

Last year, the Quad-City Housing Cluster said almost 10,000 households in the Quad-Cities are paying more than half their incomes toward housing costs.

The group unveiled a 10-year plan last fall seeking to address a gap of 6,645 affordable units for extremely low-income households earning 30% or less of area median income, or no more than $21,810 annually.

Kelle Larned, program and operations director for Salvation Army, said the nonprofit is providing households up to $5,000 in assistance — more than initially offered — including up to $2,000 for security deposit and up to $3,000 for three month's worth of rent.

Scott County as well is providing tenants with one month's rent.

As of Monday, Larned said the Salvation Army has received 10 to 15 applications for assistance from Crestwood residents, and two households have been approved for assistance.

"We are working with all of those families, we are just waiting on some documents that need to be turned in" both by tenants and landlords, "and then, hopefully, they would get approved," Larned said.

She said about 54 households are impacted by the city's order and must find new housing.

"A lot of those people have left and found housing," Larned said. "A lot of them are still in limbo of getting funding. The big part of it is there's not enough affordable housing for these people to go. Some of them have six to eight people in their household and living in a two-bedroom. Well, if you go to a decent landlord, they're not going to let you have that many people in a two-bedroom, which is all they can afford.

"The main issue is there's not enough affordable housing in the Quad-Cities to put these people," Larned said.

Larned said the Salvation Army has paid for some Crestwood families to stay in hotel rooms because they could not find suitable housing for their family in the Quad-Cities, and will do the same for any tenants unable to secure new housing by the Aug. 15 deadline to vacate their apartments.

"We're moving the funding as fast as we can," Larned said. "We have the funding. It's just a matter of getting the documents from the people who are getting evicted and getting returned the ones that have to be signed by the landlord."

Some Crestwood tenants, though, including 37-year-old Lashina Bea, have complained about an onerous application process and stringent eligibility requirements that have made it difficult to secure needed assistance to find new housing quickly.

Bea lives with and takes care of her 70-year-old mother she said suffers from a respiratory disease and has difficulty breathing.

Bea, however, who is not named on her mother's Crestwood lease, said she and others — who continued to work uninterrupted during COVID-19, but lack the required savings to move to a new place — are "pretty much stuck in this s---hole."

"There were more barriers," Larned, of the Salvation Army, said of using the federal CARES Act funds. "That has changed. They still have to be able to show they" have the required income to afford rent once temporarily assistance expires, in addition to showing a direct or indirect financial hardship caused by the pandemic.

"But, if they don't have any direct impact from COVID ... because they're (being forced to leave) and at risk of becoming part of the homeless population, which is more susceptible to getting COVID, therefore, we can relate it that way to COVID ... and use the funding that way," Larned said.

Other tenants, she said "don't have any income at all," because they've lost their job or cannot work due injury or disability.

"And therefore, even if I had all the dollars in the world to give them for rent assistance, it's not going to help them be able to get into a place, because landlords want you to be able to have money to sustain a place and that's an issue as well," Larned said.

Ashley Jared, communications director at Iowa Finance Authority, said the situation involving Crestwood tenants, as well as residents of recently sold rental properties along East 35th Street who also face being displaced, "are high on our radar, and we are working closely with the city of Davenport, which said they will be in touch with us if they run into road roadbolocks.

"At this point, they are working hard as best as they can, tenant by tenant, to provide assistance," Jared said.

"It's a matter of making sure the buyer that signs an offer has seen the property in detail before we sign an offer from the seller's standpoint," said Ryan, who represents the Minnesota-based group that owns the Crestwood Apartments and townhomes as well as apartments on Heatherton Drive.

Ryan said he has shown the property as recently as last week to interested buyers.

"There's some serious interest after seeing it," he said. "They're planning on making sure the tenants that are here right now can stay. They want to make sure that they get a crew together immediately to fix up the property. And their goal is to close it within 30 days, which is aggressive."

He said interested parties plan to purchase the properties "at a cheap price" of $3.2 million for 96 units and "putting a very large amount of money into it, and then they're going to have market rent apartment rentals."

He estimated about 30% of the Crestwood units are currently occupied.

Ryan declined to provide additional information about the potential buyers and their possible plans for the rental properties.

A manager for a Minnesota-based rental property owner who failed to make sufficient repairs to what Davenport city officials say have become substandard housing in the Quad-Cities evicted tenants last year in violation of both state and federal eviction bans, according to Iowa Legal Aid and online court records.

'This should be our top priority': Tenants ordered to vacate Crestwood Apartments offered free food, clothing and school supplies

The Iowa Democratic Black Caucus partnered with Open Door Crisis Assistance to collect donations and put together the event, offering free school supplies, toiletries and other necessities to tenants ordered to vacate from their Davenport apartments.

Children play on the balcony of a unit at Crestwood Apartments Monday, Aug. 2, 2021, in Davenport.

Overgrown plants take over the sidewalk leading up to one of the Crestwood Apartments buildings on E. 37th Street in Davenport, Thursday, July 29, 2021.

A broken window is boarded up at Crestwood Apartments on E. 37th Street in Davenport, Thursday, July 29, 2021.